Solanum watneyi  is presently known from a small range of localities in the sub-arid, monsoon-influenced, zone of northwestern Northern Territory (Fig. 1View Figure 1) at elevations around 100-150 m. The species is locally abundant along the Bullita Stock Route and nearby areas, but abundance elsewhere is not well known. Solanum watneyi  appears to be associated, at least in Judbarra, with the "Ridges, Hogbacks, Cuestas, and Structural Plateaux" land unit defined by Brocklehurst et al. (1996), where it occurs in open Eucalyptus  woodlands. Field collections have been made in well-drained limestone-based soils variously described as being sandy, sandy-loamy, clayey-loamy, and loamy. Collections from 70-80 km east of the Bullita section suggest that the species range extends eastward into the Wanimyn Trust and the landscapes around the Buchanan Highway; and collections from Limbunyah Station hint toward a westward range extending toward the Western Australia border (Fig. 1View Figure 1).

The areas where Solanum watneyi  has been collected most frequently are along graded roads (Fig. 2DView Figure 2), suggesting that this taxon is disturbance-adapted. Although collections have been made in areas that experience bushfires, specific fire ecology adaptations are unknown. The pollination biology has not been studied, but the flowers are likely buzz pollinated (see Anderson and Symon 1988) - as evidenced by anthers with terminal pores and the need for physical manipulation of anthers during hand pollinations in cultivation. Seed dispersal appears to be biotic given the fleshy nature of the fruits, which ripen to yellow at maturity. Symon (1979) included Solanum eburneum  in a group of solanums with firm yellow berries likely to be dispersed by mammals or larger birds; Solanum watneyi  fits this same profile.

Most flowering specimens have been collected from March-May, at the transition from the wet to dry seasons, with fruiting specimens collected in April-June. Earlier flowering collections (e.g. K. Brennan 9002, 27 Jan 2000) suggest that blooming may begin during the rainy season and extend into the dry season. Plants in cultivation began flowering about 90 days after seed germination; and fruits took about 60 days to mature following hand pollination.

The specific epithet of “watneyi” is inspired by the book and film, The Martian, in which the protagonist finds himself stranded on Mars surrounded by the planet’s harsh terrain and reddish soils. In a shelter, he manages to grow a crop of potatoes ( Solanum tuberosum  ) before finally being rescued by his astronaut colleagues. We’ve chosen to name Solanum watneyi  after this character, Mark Watney, in part because of the similarly reddish soils of its habitat and the congeneric nature of the potato - but, most notably, as a way to honor the creation of a sci-fi hero botanist by author Andy Weir ( Weir 2013) and to acknowledge perhaps the finest paean to botanical science (and botanical field work) that Hollywood has yet presented (see Martine 2015).

Based on IUCN Red List Categories ( IUCN 2012), Solanum watneyi  should be considered Data Deficient (DD). While the species appears to be relatively widespread over a range of approximately 6000 km2, it has been collected in fewer than 20 localities. The small number of collections, coupled with the fact that populations often consist of multiple individuals, suggests that the species is common in some localities but uncommon on the regional and global scales (apparently of restricted distribution). Further data are required before a certain conservation status can be determined. Key populations are protected in Judbarra/Gregory National Park and appear secure.

Solanum watneyi  has been known for some time as a recognized morphotype, having been described by Latz as Solanum  sp. “Bullita” in the early 1970s. This name has been used as an identifier by other botanists since that time (e.g. Bean 2012), appearing on the labels of herbarium specimens that are similar to Solanum eburneum  yet conspicuous enough in the characters identified above to merit attention.

Previous studies inferred that Solanum eburneum  is part of the "Bush tomato clade" ( Martine et al. 2006, 2009), a clade of andromonoecious species that appears to have arisen between 4 and 1.5 million years ago ( Särkinen et al. 2013). Preliminary results from a large-scale next generation molecular study (Martine et al. in prep) infer that Solanum watneyi  is most closely related to Solanum eburneum  and Solanum chippendalei  . Solanum watneyi  stands out among this group based on morphological differences that include its conspicuously long fruiting pedicels and internodes, lighter purple corollas, and a sprawling habit that often finds mature fruits resting on ground.

In the western (Bullita) tract of Judbarra/Gregory National Park, Solanum watneyi  is locally common along the roadsides of the Bullita Stock Route between the Victoria Highway and the old Bullita Homestead, where it has been collected numerous times. Its abundance along this dirt thoroughfare suggests that the species appears, like many solanums, to respond favorably to disturbance. In fact, it appears most vigorously on the edges of graded dirt roads, resprouting from rootstocks after passes from mechanized grading equipment (Martine, pers. obs.)

While our ex situ morphometric analyses and most field observations are consistent with the distinctive morphological gestalt of Solanum watneyi  , collections from around the Bullita Station can be somewhat confusing - with vegetative characters approaching intermediacy between it and Solanum eburneum  . A small set of ex situ crosses between them (Martine, unpublished) suggests that interspecific hybridization is possible. Symon (1981) described Solanum eburneum  as a narrowly-occurring species of "broad, shallow, seasonally dry Melaleuca  swamps or flats with heavy grey soils" around the East Baines River. This localized endemism aligns with the characteristic physiography described by Brocklehurst et al. (1996) for the East Baines corridor, with Solanum eburneum  occurring on clays and lithosols found on alluvial plains and rises along the river course as it runs northwest out of the Bullita section of the park (and on Dick Creek to the west and Timber Creek to the east). The presence of Solanum watneyi  on well-drained sandy-loamy soils on the (largely) southern edge of this range suggest that the two closely related taxa might have diverged on disparate soil types in the last few million years (dating based on Särkinen et al. 2013).

Recent land use history may have brought the species into secondary contact on the north-south edge of their ranges in the central area of the Bullita Section, where an underlying geology including sandstone, siltstone, and dolomite creates an especially complex physiography ( Brocklehurst 1996). The remote Bullita cattle station, the homestead of which is now a park attraction and outstation site, operated in this area for several decades beginning in the early 1900s. The Bullita Stock Route, a graded access road running south from the Victoria Highway, closely parallels the East Baines River near the homestead - providing a corridor of frequently disturbed habitat by which Solanum eburneum  and Solanum watneyi  might move and come into contact with the aid of road grading equipment or, perhaps historically, livestock. We suggest that the combined effect of ancient-origin physiography and recent disturbance in this area has created a zone of hybridization that deserves further study. 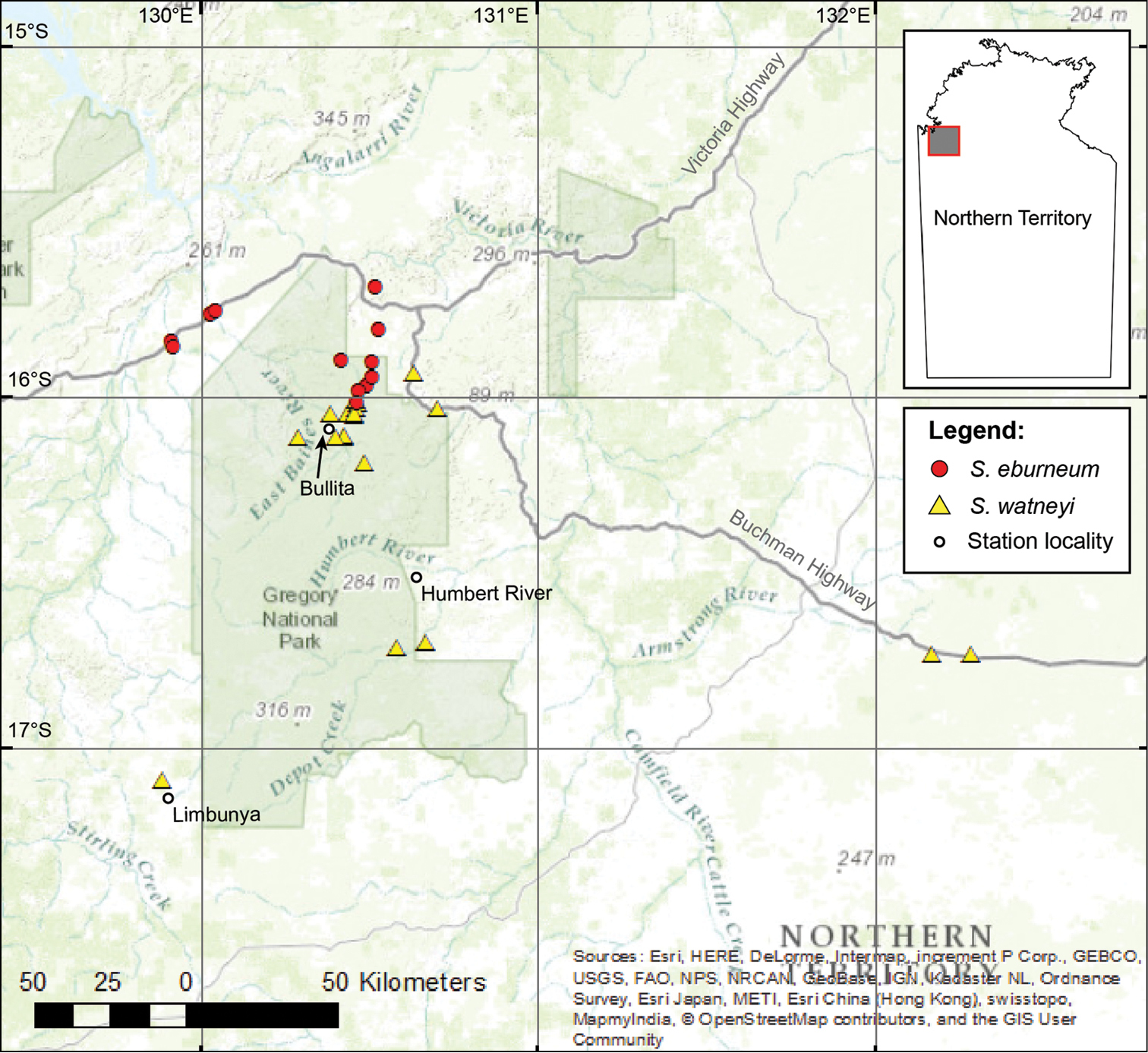 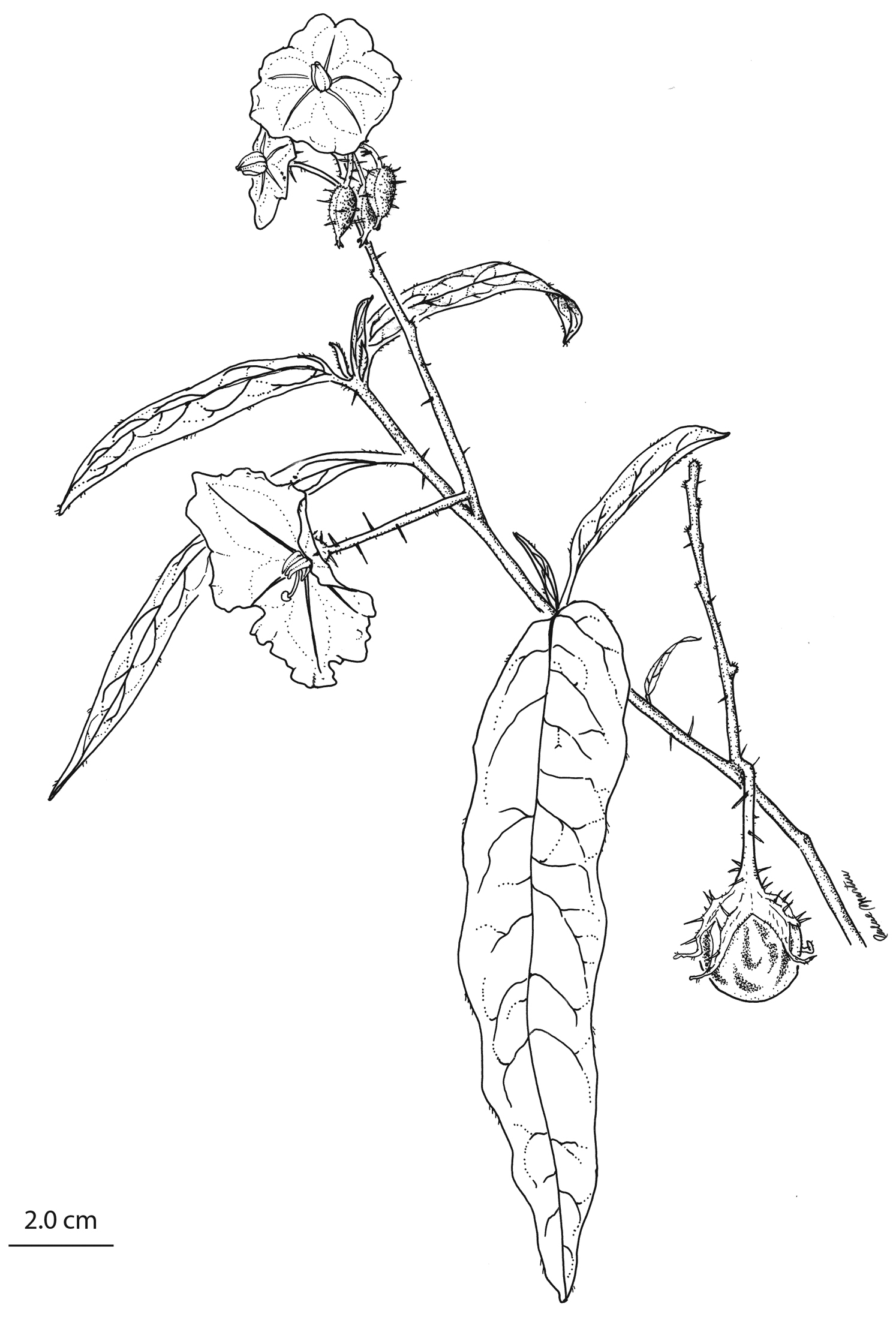 Figure 2. Illustration of Solanum watneyi. Mature branch with flowers and a developing fruit. Based on plant grown at Bucknell University from seeds of Martine and Martine 4065. Drawing by Rachel F. Martine.

Figure 2. Illustration of Solanum watneyi. Mature branch with flowers and a developing fruit. Based on plant grown at Bucknell University from seeds of Martine and Martine 4065. Drawing by Rachel F. Martine. 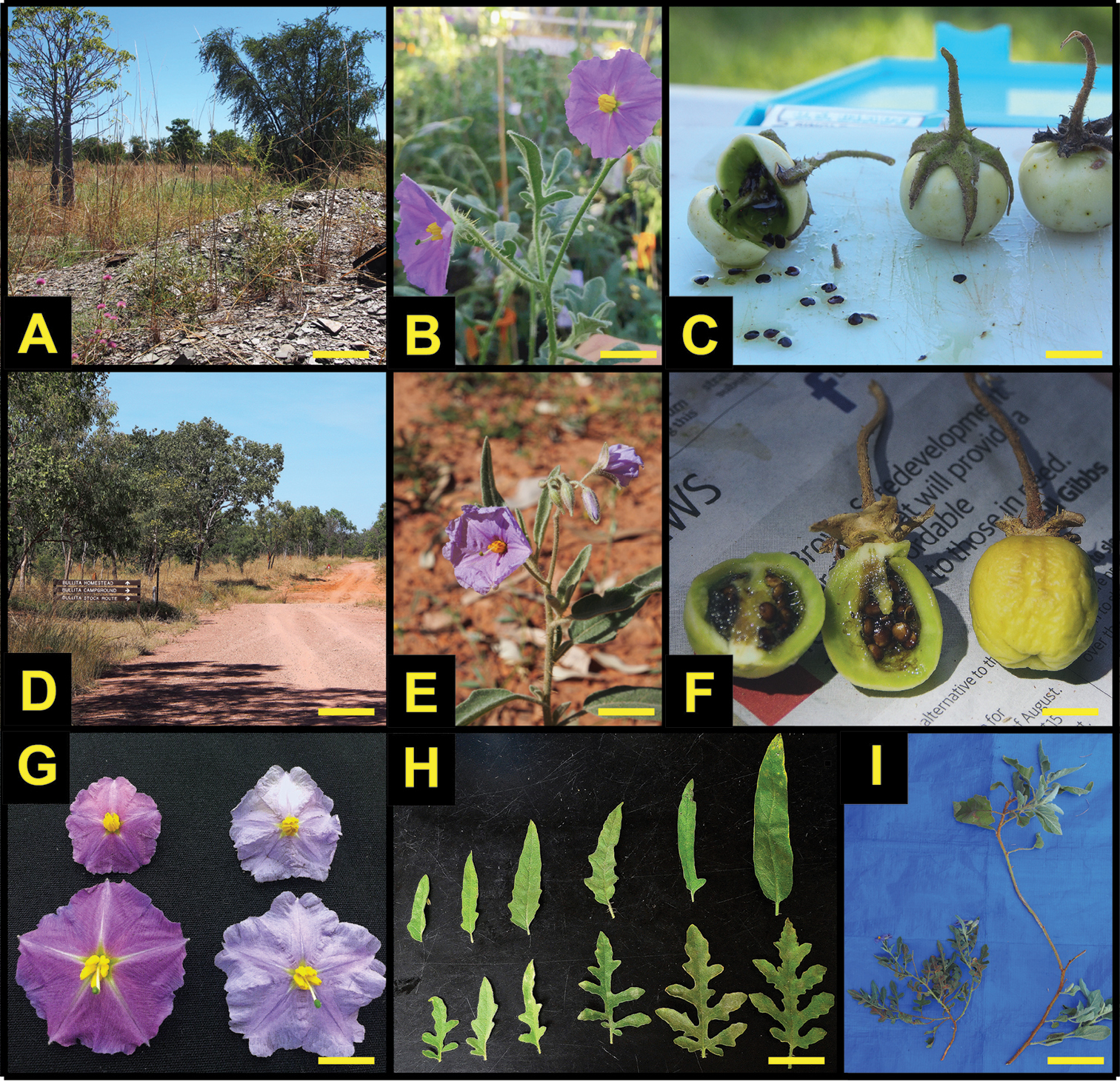