Etymology. Refers to the name of the type-locality: Pedra da Mina  Mountain. The specific epithet is treated as a noun in apposition.

Taxonomic discussion. The male hypopygium of Podonomus mina  sp. nov. is similar to that of Podonomus albinervis Edwards 1931  , both presenting a pronounced subapical swelling covered with microtrichia, and gonocoxite with an excavated area dorsomedially. However, they differ by the presence of a group of strong setae in the dorsomedial excavated region in P. mina  sp. nov. gonocoxite. In addition, P. albinervis  possesses a much more robust megasetae on gonostylus and a whitish area that crosses the middle of the wing. The new species also shares many similarities with Podonomus setosus Brundin 1966  , and Podonomus caranqui Roback 1970  , especially by the presence of the conspicuous group of stout setae in the gonocoxite, but differ from the former by the presence of a notable rounded swelling in the gonostylus, and from P. caranqui  by the presence of microtrichia covering the swelling.

P. mina  sp. nov. does not fit perfectly in any of the five groups proposed by Brundin (1966). Although the gonostylus of the male is similar to those found in the albinervis  group, without a true subapical lobe, and presenting only a swelling covered by microtrichia, the size of the swelling seems to be more prominent than other species of the group, except P. caranqui  . This feature would transfer the species to the decarthrus group, although species in this group do not have the swelling covered with microtrichia. On the other hand, the female features seem to fit well in the decarthrus group, once the posterior margin of the cerci is obliquely cut and deeply sinuous, also presenting 4 setae apically. Finally, the hypothesis that P. mina  sp. nov. belongs to the decarthrus group was also not supported by pupal characters, especially diverging in the number of sinuous setae on anal lobe (only five in P. mina  sp. nov.) and the presence of a large lamella in the segment II.

DNA Barcoding. The six new sequences combined with a published dataset on Podonomus  specimens (Trivinho-Strixino et al. 2012) confirmed that P. mina  sp. nov. is one of the molecularly distinct groups previously revealed by Trivinho-Strixino et al. (2012). However, DNA barcoding was previously performed mostly from larval tissues, and further comparative larval morphological analyses did not support the evidence of several species. With more adults available for analyses, DNA Barcoding was crucial to link temporal and geographical diversity of Podonomus  . Adults collected in Pedra da Mina  mountain in 2014, were clustered together with larvae collected in Caparaó mountain in 2012, corroborating that one of the molecular distinct groups revealed by Trivinho-Strixino et al. (2012) is in fact a valid species, molecularly and morphologically distinct from P. pepinellii  . The other Podonomus  clade from Caraça mountain still remains known only from its larval stage ( Figure 4). Maximum intraspecific genetic divergence was 1.13% within P. pepinellii  (n=27), 2.6% within P. mina  sp. nov. (n=9) and 0.3% within Podonomus  sp. (Caraça, n=5). Among the three distinct groups formed, the mean distance between P. mina  sp. nov. and P. pepinellii  was 8.0%, between P. mina  sp. nov. and Podonomus  sp. was 10.26% and between P. pepinellii  and Podonomus  sp. was 10.25%. 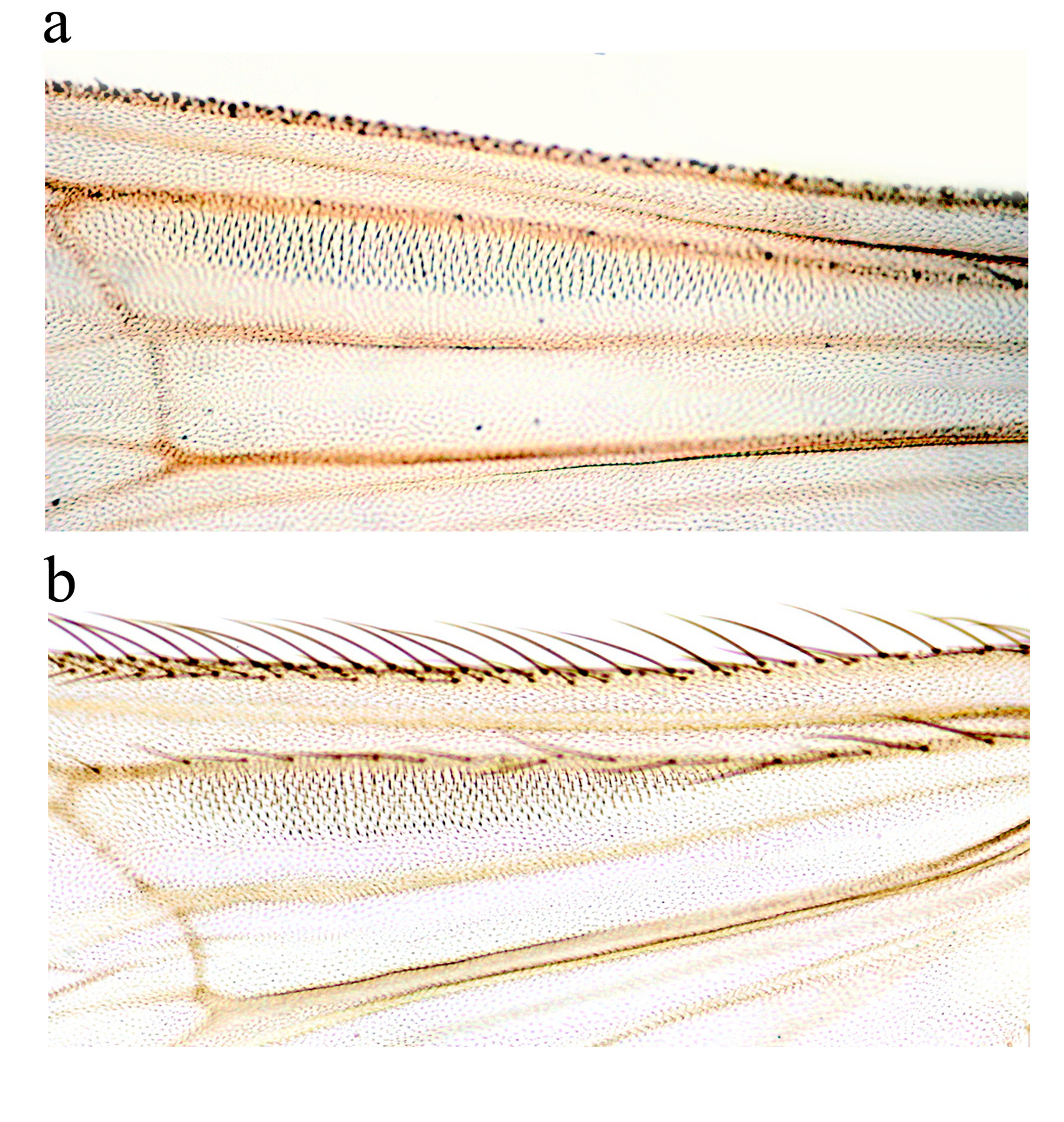 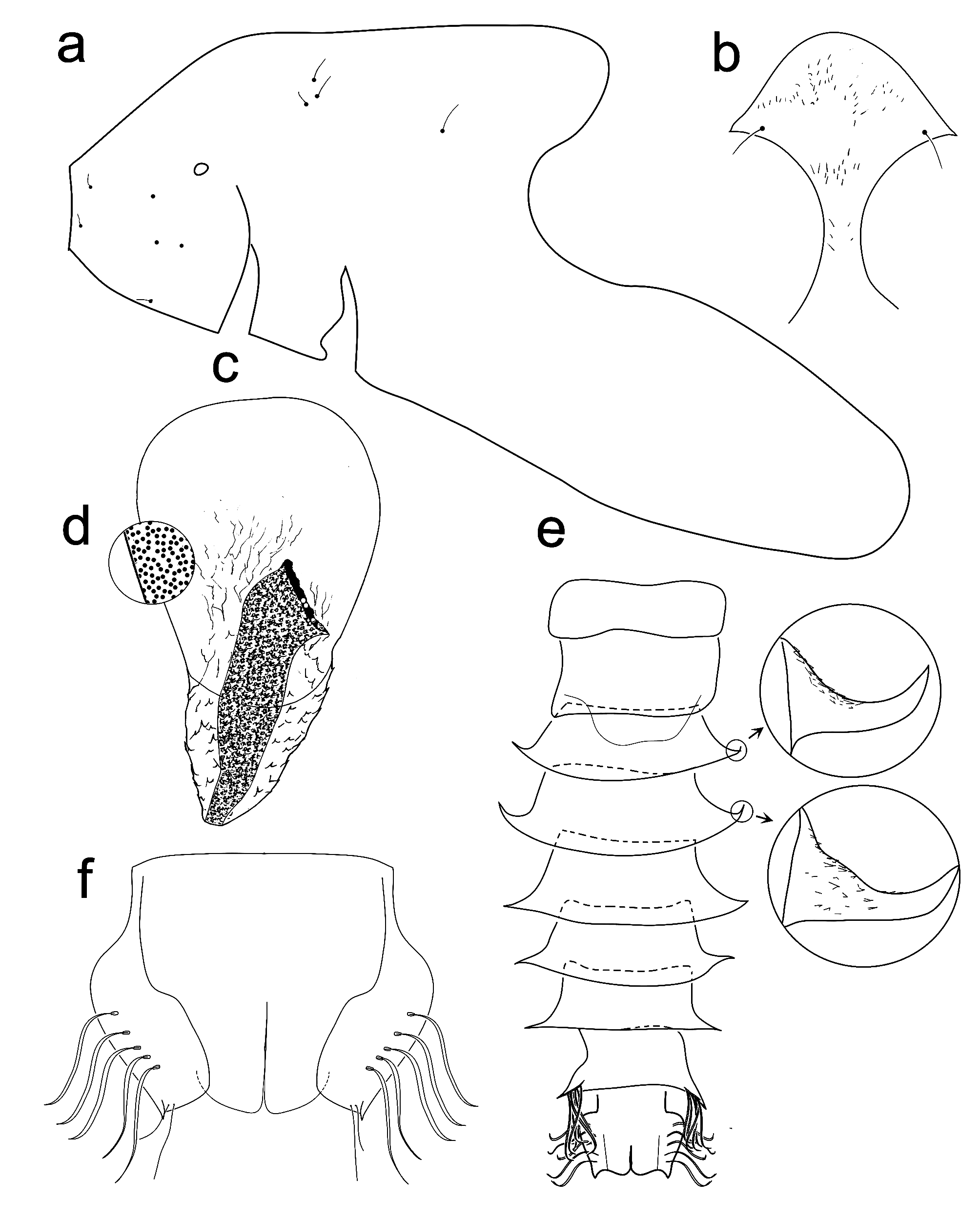