Description. Our male specimen mostly corresponds to the type description provided by Le Loeuff & Intès (1974). Both specimens present a rudimentary, uniramous and bisegmented pleopod 1 (as shown in Le Loeuff & Intès 1974: fig. 9 r). While the type specimen was described with pleopods 2–5 missing, in our male specimen, although no scar or trace of pleopods can be appreciated on pleomere 2, a conspicuous scar is present in place of pleopod 3; pleopods 4 and 5 are biramous and foliaceous ( Fig. 2View FIGURE 2 A), with an appendix interna projecting from the distal proximal third of the endopod inner border, and with distal margin obliquely truncate and furnished with hooks ( Figs. 2View FIGURE 2 A, B).

Habitat. The type specimen was collected at 200 m with a DRB: drague à dents (72 × 30 cm); no bottom was specified ( Le Loeuff & Intès 1974). Our specimens were captured off South Nouakchott, at two geographically close stations, on muddy fine sand and muddy coral rubble, at depths between 358–364 and 441 m.

Distribution. Previously reported only from the type locality ( Ivory Coast) and now from Mauritania, this species seems to be restricted to the West African tropical region.

Remarks. To date, the type specimen (male CL: 3.5 mm) from Ivory Coast (200 m) is the only one ever recorded. After its original description as Callianassa oblonga  , the species was included in the genus Cheramus Bate, 1888  as C. oblongus  by Manning & Felder (1991), and accepted by Tudge et al. (2000) in this genus. However, Sakai (2005: 20) was unable to find enough morphological characters that reliably separated both genera; he therefore synonymized the genus Cheramus  with Callianassa  .

On the other hand, a tendency to group Callianassa  species based on pleopod morphology, among other characters, led Saint Laurent and Le Loeuff (1979: 55) to recognize three groups: one including species with pleopod 1, but not pleopod 2; a second group of species lacking either pleopod 1 or pleopod 2; and a third group with ‛des pléopodes présents, bien que faiblement développés, sur les deux premiers segments abdominaux du mâle’ (pleopods on male absominal segments 1 and 2 present, although reduced). These authors included only one species, Callianassa oblonga  , in the last group, although this species was originally described as with ‛pléopode 1 réduit, en forme de doigt de gant à extrémité courbe; les autres pléopodes manquent.’ (pleopod 1 reduced, fingerlike and with tip curved; pleopods 2–5 absent) ( Le Loeuff and Intès 1974: 40); however, although a reduced pleopod 1 is present (and bisegmented as shown in Le Loeuff and Intès (1974): fig. 9 r), there is no clear evidence of an existing pleopod 2.

All the foregoing propositions of classification were based on pleopod morphology. However, neither of the only two males ever recorded (the type specimen and the one captured during the Maurit surveys) displayed pleopod 2, and there is no evidence of their existence (at least in our material). In consequence, we propose here the relocation of C. oblonga  to the genus Trypaea  as Trypaea oblonga ( Le Loeuff & Intès, 1974)  n. comb. 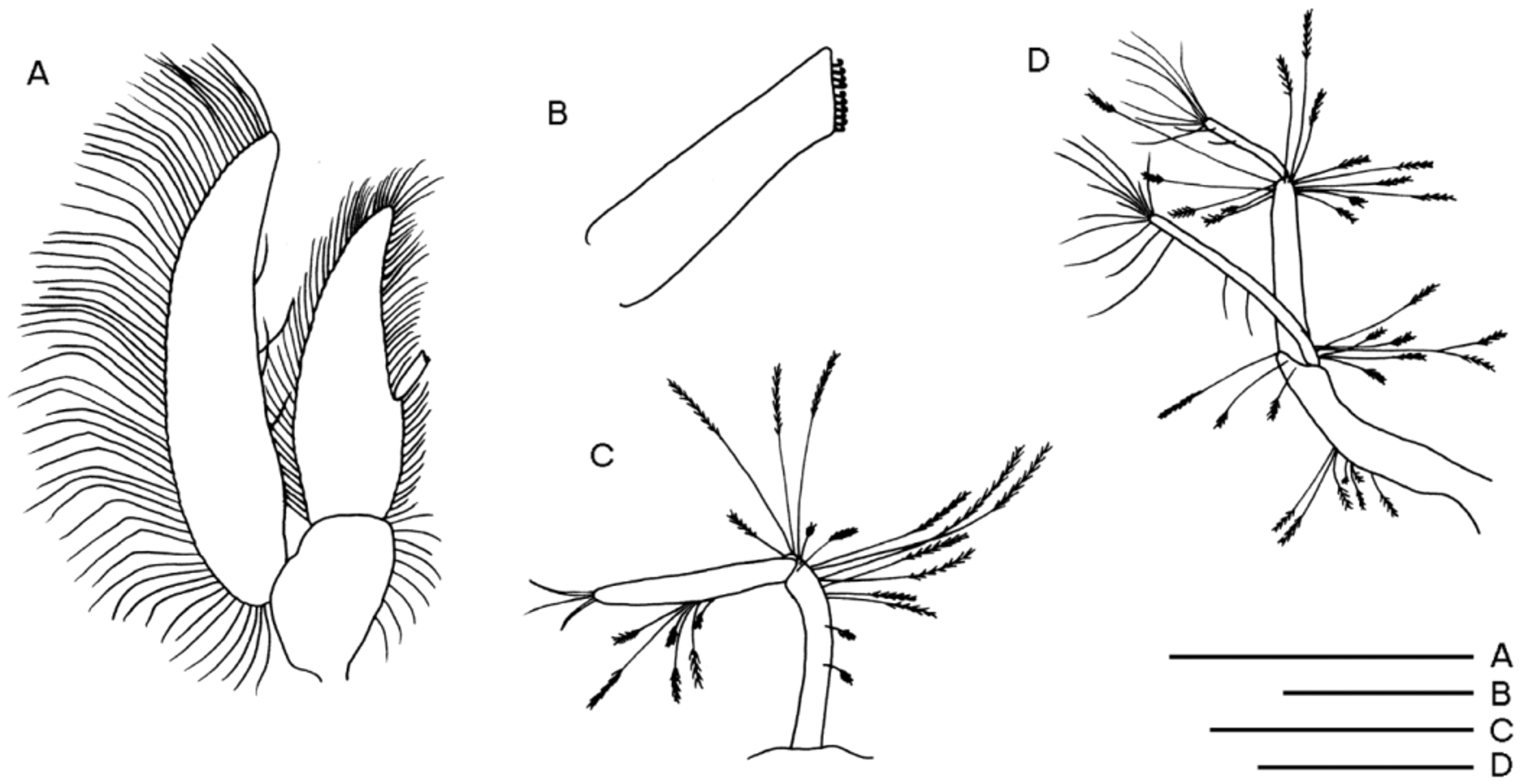