Apterous viviparous females. Figures 1View FIGURE 1 D–1I. Based on 10 specimens. Colour when alive matte green due to the presence of whitish waxy powder. Body 3.23–3.70 mm long and pear-shaped with long antennae and legs and noticeable siphunculi and cauda. Mounted specimens more-or-less very light brown with light brown to blackishbrown head, appendages, siphunculi, genital and anal plates and cauda, see details below. Setae on dorsum of body and antennae and several on legs thick and with apex truncate; other setae more-or-less pointed. Marginal tubercles absent. Head, including clypeus and mandibular and maxillary laminae, medium-brown. Frons sinuous, medialfrontal tubercle lower than the frontal-lateral (or antennal) tubercles. Cephalic dorsum with two pale anterior setae and four pale posterior setae. Antennal segment I darker than head, mainly on its inner side, and dorsally striate; antennal segment II pigmented as the head and weakly ornamented on its dorsal side; antennal segment III nearly smooth and progressively darkened from base, pigmented like segment II to a blackish brown extreme distal portion; antennal segment IV with transverse marks, and dark brown with a distal portion blackish brown; segments V and VI imbricated and dark brown. Sensoria round and with thick walls; primary sensoria ciliate; secondary sensoria small, non-protruding, more-or-less aligned from the end of the paler part of the segment. Rostrum reaching past middle coxae; proximal rostral segments (I and II) are pigmented as head and as middle strip of segment III, whose sides are very pigmented, almost black, as much as the ultimate segment (= rostral segments IV+V in Blackman & Eastop 2019), which is narrow. In the legs, the dominant pigmentation is similar to that of the head, except for areas internal-proximal of coxae, dorsal-distal of femora and distal about one eighth of tibiae, and entire tarsi, which can be darker up to blackish brown. Leg segments are smooth, except for tarsi. Thoracic and abdominal dorsum with shriveled appearance and no more pigmented than the cephalic dorsum, with small, brown spiracular and intersegmental-muscular-sclerites only present on thorax. Setiferous sclerites are completely absent in several specimens, in the most “ornamented” specimens they are present on abdominal segments 6 to 8 and on marginal areas of segments 3 and 4, although not associated with all setae; note that thoracic and abdominal setiferous sclerites are frequent, wide and well pigmented in most Uroleucon  , but usually absent in species living on Adesmia  . Siphunculi are progressively pigmented from medium-brown to dark brown, cylindrical and more-or-less as thick as the hind tibiae on most of their length, enlarged at its base, trumpet-shaped at the apex, with very small flange, and with small polygonal cells arranged in 8 to 10 rows and much more clearly defined than those of U. adesmiae  and U. nahuelhuapense  . Subgenital plate bicolored, being paler on the lateral-posterior edge. Anal plate as dark as the darkest part of siphunculi. Cauda lanceolate, more-or-less blunt at the apex, no darker than the palest part of siphunculi, with long and delicate setae. Metric and meristic features are in Table 3.

Oviparous females. Figure 3DView FIGURE 3. Based on 49 specimens (24 measured, taken from all samples). Very similar to viviparous apterous females, with the following differences: (1) bright green when alive; (2) hind tibia somewhat swollen on proximal third with scent plates extending distally beyond the swollen portion; (3) pigmented zones of appendages paler, especially in specimens from Magallanes region, which have no brown areas on coxae and femora; (4) siphunculi paler and not so trumpet-shaped, presenting a slight flange; (5) cauda also paler. Quantitative features are in Table 3.

Males. Figures 3E and 3FView FIGURE 3. Based on 11 specimens. Apterous. Brown when alive. They are also very similar to apterous viviparous females, although slightly smaller, with siphunculi shorter than viviparae and oviparae, less markedly trumped-shaped and with a more-or-less marked flange, and cauda also shorter and more-or-less triangular. Scent plates are present in the hind tibiae, which are very slightly thickened than the tibiae of the other legs; the presence of these pheromonal structures is very surprising because they are typical of oviparous females in Aphidinae  . Mounted specimens show: an intense pigmentation of antennal segments III to VI; abundant dorsal setiferous sclerites on thoracic and abdominal segments as pigmented as the intersegmental and spiracular sclerites, those on segment 8 coalescing in some specimens; a transverse band on segment 7; and sometimes few and very scattered ventral sclerites on other abdominal segments. Quantitative data are in Table 3.

Etymology. The specific name australe  is an epithet in neutral gender because Uroleucon  is neutral, that means “belonging or relative to the south” and refers to the very southern distribution of the species.

Bionomics. Uroleucon australe  feeds on the small stems of small plants of Adesmia boronioides Hook.  f. ( Fabaceae  ), which is its only known host. It can be conjectured that the alate viviparae in this species are infrequent, because they and their nymphs are unknown, and alatae are also infrequent in the other two Uroleucon  species living on Adesmia  ,. Males and oviparous females have been collected in the middle of summer, which shows that the life cycle of the species is abbreviated. As the males are apterous, it is clear that the species is monoecious, not host-alternating.

The presence of scent plates in several apterous viviparous females is not surprising if they belong to autumnal generations. All studied males bear scent plates, but it is not possible to ensure that this is a universal character of the U. australe  males, because the studied specimens were collected in two locations very close to each other.

Geographical distribution. The new species is currently known in four Chilean localities with low altitude and south to parallel 46º S, in the Aysén and Magallanes regions, north and south of the Patagonian ice fields, which are connected in viable ways for the movement of insects in general by two corridors east and west of those fields. The eastern corridor has characteristics of climate and vegetation that are more similar to those of the collection sites, whilst the western corridor, formed by islands and fjords, is very humid and forested. Thus, it is possible that the species could also be found in Chubut and Santa Cruz ( Argentina) in areas near the mountain range.

Molecular analyses. Comparisons of U. australe  sp. n. COI and tRNAleu-COII sequences with other South American Uroleucon  , as well as northern hemisphere species, confirmed that U. australe  was genetically most similar to U. nahuelhuapense  (results not shown). Genetic distances between U. australe  and U. nahuelhuapense  were 1.7% for COI and 1.1% for tRNAleu-COII. These distances are within the range found previously for closely related aphid species ( Foottit et al. 2008; Nieto Nafría et al. 2019), and corroborate the distinction of U. australe  sp. n. based on morphology.

Taxonomic discussion. The differences between Uroleucon  species are usually based on the qualitative and quantitative characters exhibited by the respective apterous viviparous females; in fact, the keys to Uroleucon  species by Blackman & Eastop (2019), and the successive keys to identify the South American Uroleucon  species ( de Carvalho et al. 1998; Mier Durante and Ortego 2008; Nieto Nafría et al. 2019) refer to characteristics of this morph, which may be the only one known, although features of alate viviparae are complementarily used in several disjunctive couplets. Apterae of several South American Uroleucon  species differ from related species by some characteristics, sometimes very few, which can overlap in part, such as in the differences between U. bereticum (Blanchard)  , U. macolai (Blanchard)  and U. mendocinum Mier Durante and Ortego. The  same occurs in other species-rich aphid genera, for example, between specimens of Aphis fabae Scopoli  , A. rumicis Linnaeus  and A. solanella Theobald  , or even in genera with few species, for example between apterous viviparae of Hyperomyzus lactucae (Linnaeus)  and of H. pallidus Hille Ris Lambers. To  carry out the identifications in these cases, several characters with overlapping ranges, sometimes extensive, must be studied in a large series of specimens. However, sometimes a solitary character can resolve the identification, even if it is qualitative and infrequently used for the identification of aphids of that group.

Contrary to what is typical for aphids, the males of U. australe  sp. n. have a greater number of distinguishing characters than are found in the females, particularly the viviparous females. Several differences between males of both species ( Table 4) refer to the siphunculi and the cauda, which greatly influence the general appearance of these specimens and allow us to easily separate them ( Figures 3B and 3EView FIGURE 3).

The key by Nieto Nafría et al. (2019) can be used to identify apterous viviparous females of U. australe  sp. n. after minor adjustments in disjunctive couplets 13, 14 and 15, which are in bold and underlined font, and including the new disjunctive couplet 15’, as follows: 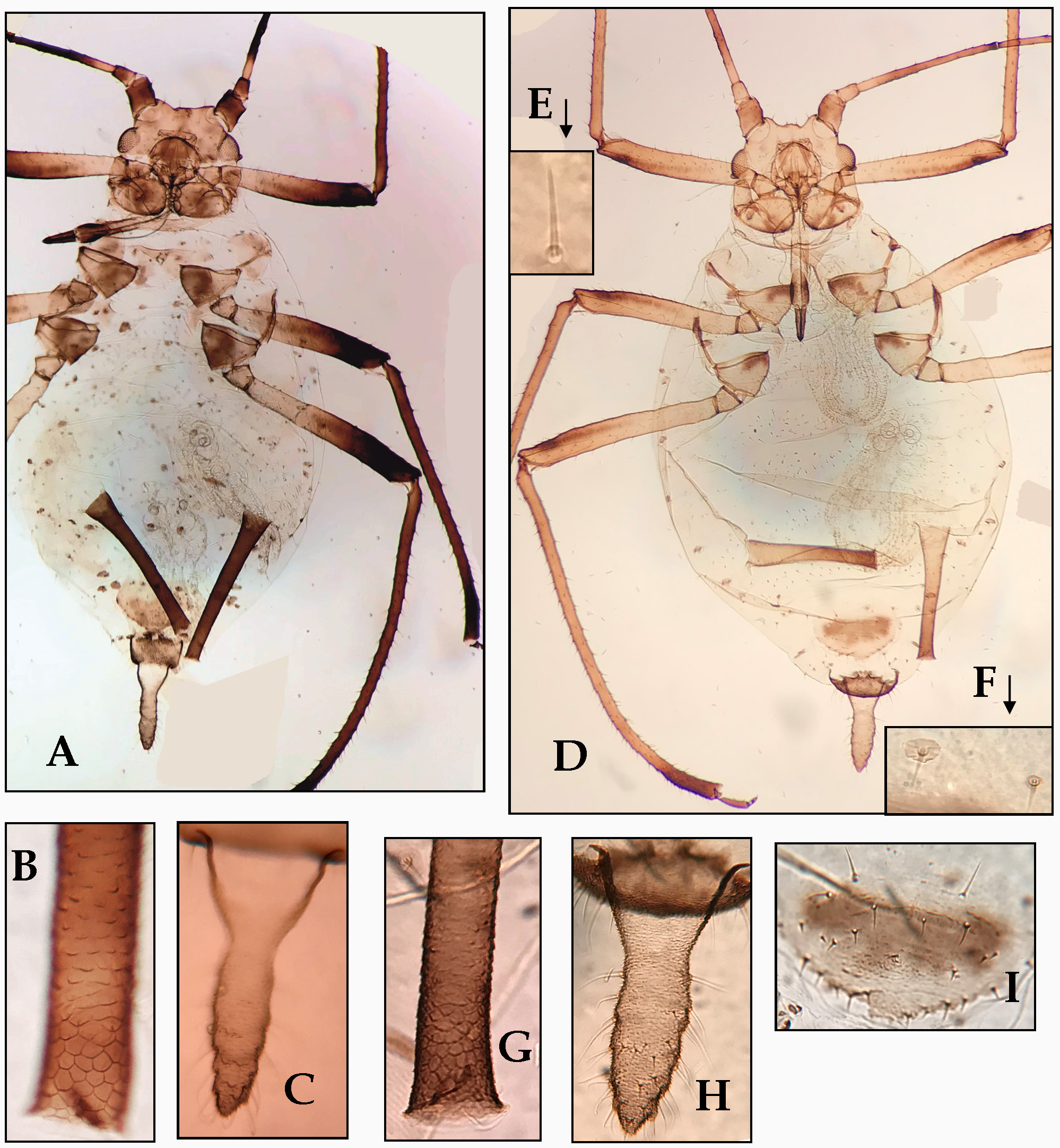 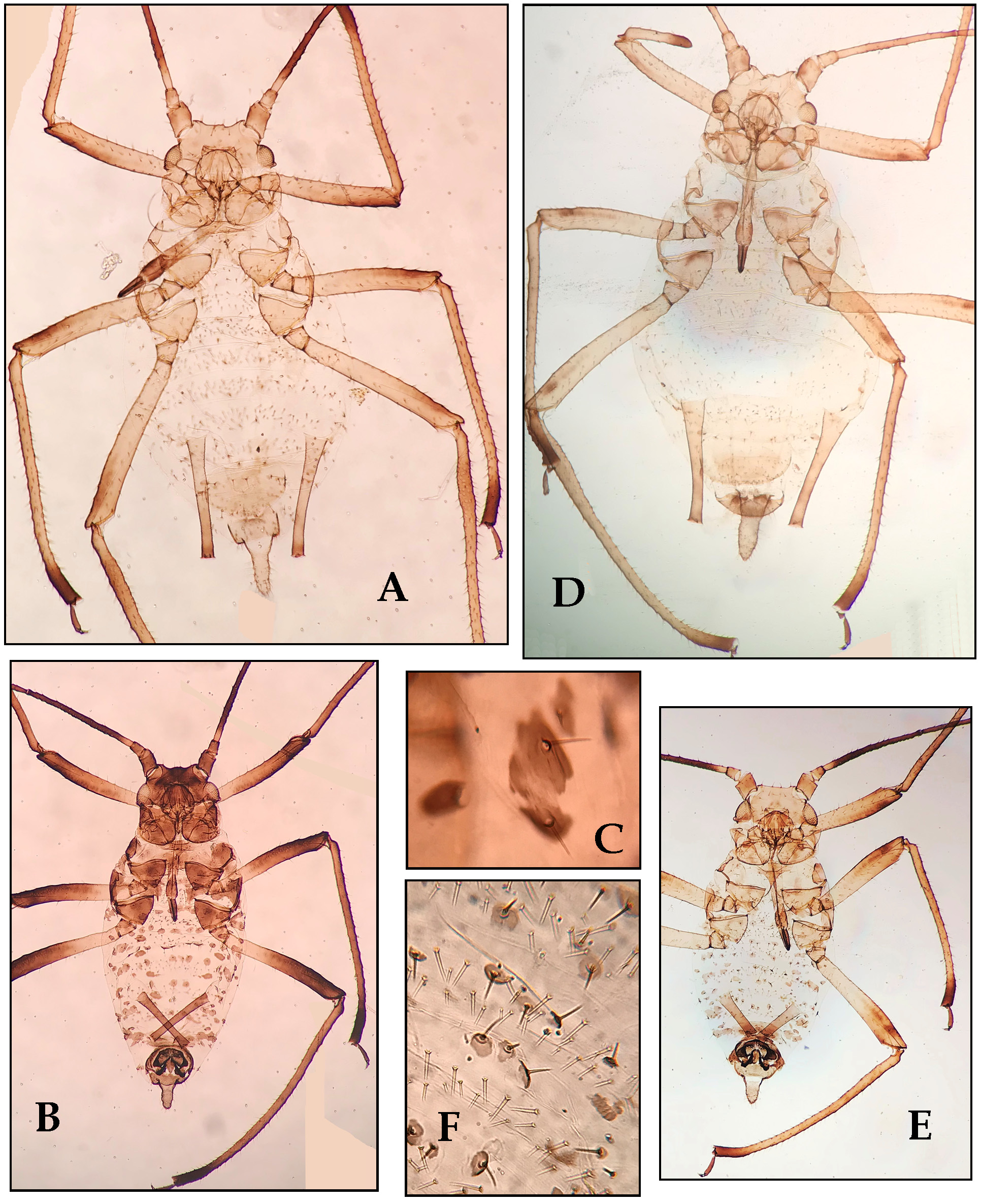