Diagnosis. See diagnosis for the genus. From Antillonatus sessilis Núñez & Davis, 2016a, monotypic and only found in Cuba, Guttulapsyche mayaensis gen. et. sp. nov. differs by its dark brown ground colour (A. sessilis shiny cream, with suffusion of pale ochreous scales and a row of ochreous spots along fold, at apex). Antillonatus sessilis shows clear differences in the ♂ -genital. The valva is markedly curved and has only short setae apically. The sac- culus is semicircular, clearly separated from valva surface by a constriction and covered with broad thorns. The vinculum is broadly triangular.

Etymology. Guttulapsyche mayaensis sp. n.: the specific epithet is derived from Maya, the indigene Mesoamerican civilization on the Yucatán Peninsula in Mexico.

Thorax. Dark brown. Legs with greyish femur, tibia, and two basal tarsal segments whitish, three distally segments blackish scaled. Forewing background blackish brown, at anterior margin at about a third and two thirds each a yellowish-white spot, another lighter spot preapical. A pale yellow spot on posterior margin at basal third, in this area also several light-coloured scales. Fringes are dark, but in two areas (at one quarter and at one half) very narrow and cream coloured. In some specimens, very narrow and darker transverse lines at a third and two thirds visible. In median area of basal transverse line sometimes with a small, light spot. Scales class 6 (after Sauter 1956), distally 6–8-pointed. Fringes broad, distally 6–10-pointed. Hindwings monochrome brown, only slightly lighter on anterior margin. Scales somewhat narrower than on forewings. Ventrally, spots on upper side hardly visible.

Genitalia. As described for genus.

Genitalia. As described for genus.

Male pupa. ( Figs 21–23 View FIGURES 21–23 ). Length 4.5–5.0 mm, maximum width 1.0– 1.2 mm (n=7), reddish brown. Wing sheaths reaching anterior margin of abdominal segment A4. Head with one pair of dorsal setae, one pair on vertex and two pairs on frons, two pairs of dorsal setae on pronotum, mesonotum and abdominal segments A1–A8, A8 with three additional pairs of setae. Venter with SV series bisetose on A4–A6, setae close together and to proleg scars, A8 with four pairs of setae: two near anterior margin, one posterior to protuberances and one on ridge edges of ventral pair of cremasteral spines. Dorsum of abdomen with a single row of posterior oriented spines on anterior margin of A4–A7 and a single row of anterior oriented spines on posterior margin of A3–A5). Cremaster consisting of a pair of adjacent round tubercles at middle of segment and two pairs of small spines, one pair directed ventrally and the other, at apex, directed caudal, anal groove indistinct.

Distribution. Only known from the type locality in the Yucatán Peninsula, south-eastern Mexico. Larval cases of similar shape have also been observed in Palenque, Uxmal, and Yaxchilán. They may also belong to the new species. Therefore, it could be assumed that it is more widespread on the Yucatán Peninsula.

Biology. The species presumably feeds on lichens that grow on tree trunks but no caterpillars were observed feeding. Guttulapsyche mayaensis gen. et. sp. nov. were found on tree trunks in the park-like landscape around Chichén Itzá. The larval cases were attached to the lower part of the trees. Usually, they were located at places which were densely overgrown with lichens. Rifts in bark or other sheltered places were preferred. These are the unique places where the larvae pupated. It can be assumed, however, that oviposition and larval development take place in such places. Geologically, the bedrock is limestone and originally the area was characterised by tropical rainforest. In November, however, only pupated larval cases were found, from most of which the adults had already emerged. Furthermore, specimens emerged later to middle of December in Germany. Because only scarce data from the only mentioned excursion are available there is little to report on phenology. The number of rainy days varies as does the amount of rain. Years of high humidity and warm temperatures are likely to provide suitable conditions for development in each month. No younger stages of development were found.

The distance from the ground of all observed or collected specimens varied between 0.5 to 3.5 meters. The way the larval cases are attached is remarkable. Typically, for pupation psychid caterpillars attach the wider end of their larval cases (these front aperture is employed for feeding and crawling) and turn around later to emerge at the narrower end (the original rear end for the purposes of defecation and emergence of the adult). However, Guttulapsyche mayaensis gen. et. sp. nov. were attached to the narrow end, which is believed to be the rear end. To do this, the caterpillars would first have to attach the larval case to the front end and then loosen this connection again after the rear end has been attached. Only then does the larval case hang down like a drop. If it is fact that this process takes place in the mentioned manner, it would be the only known species with such a process within the Psychidae . 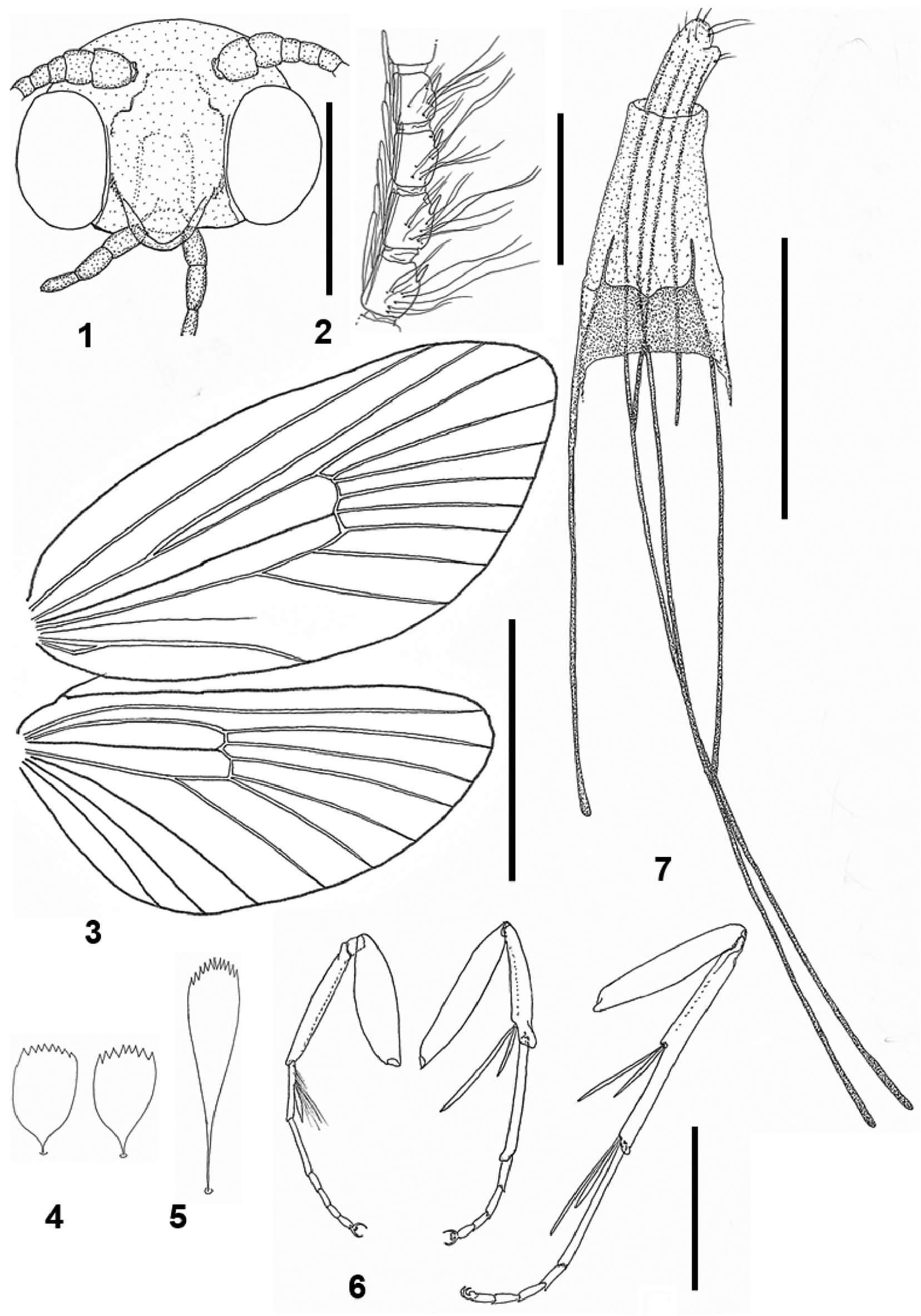 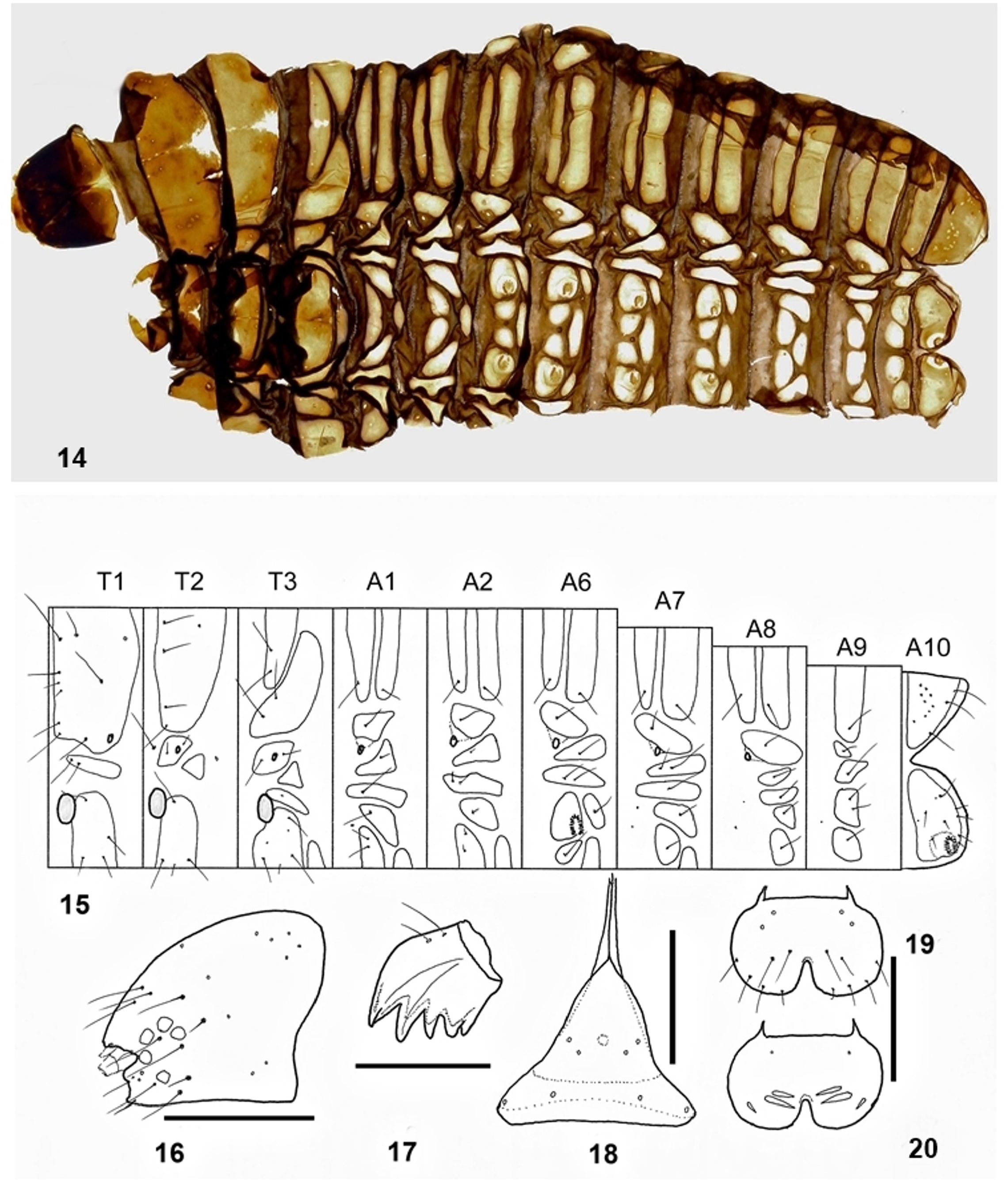 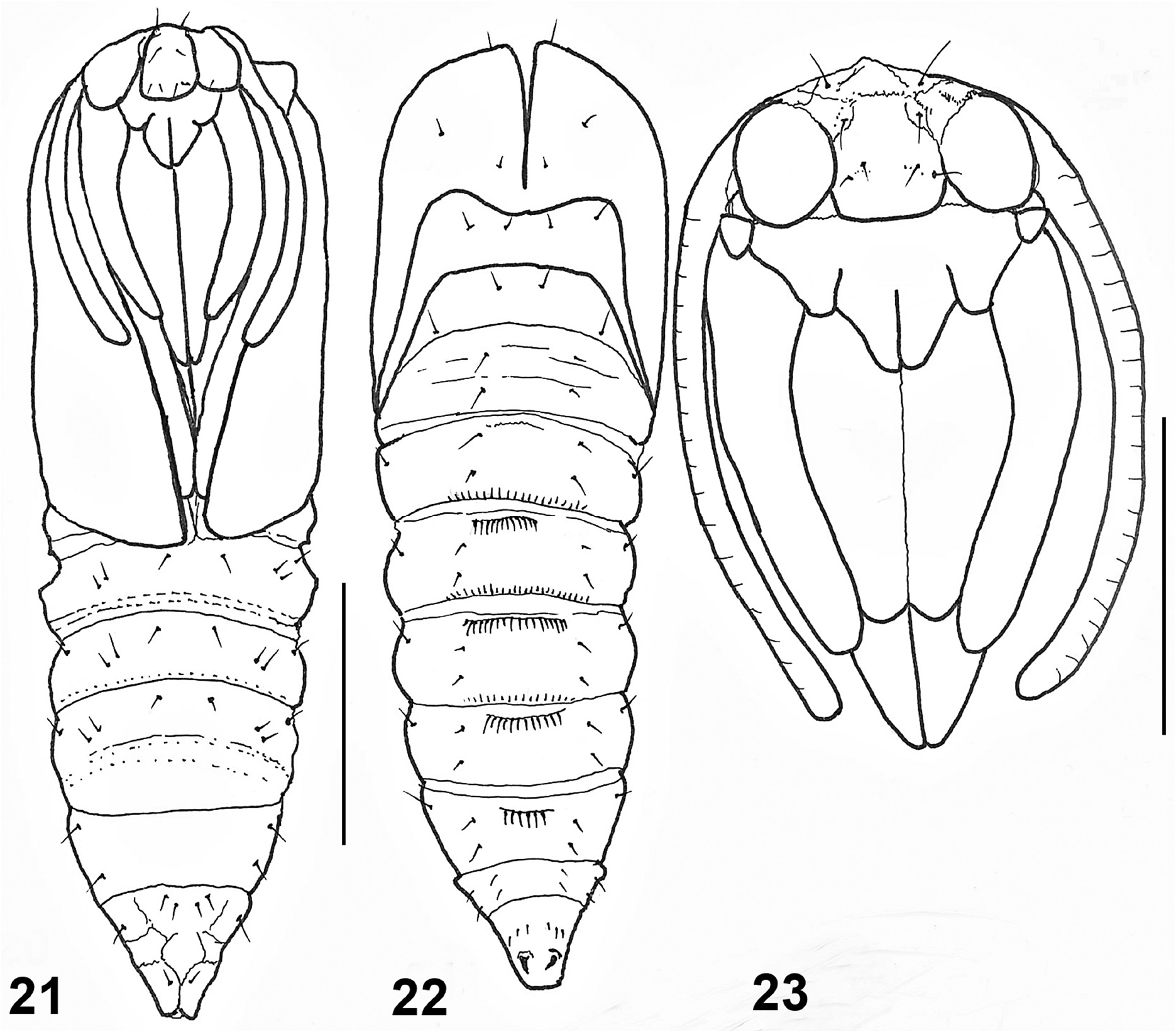 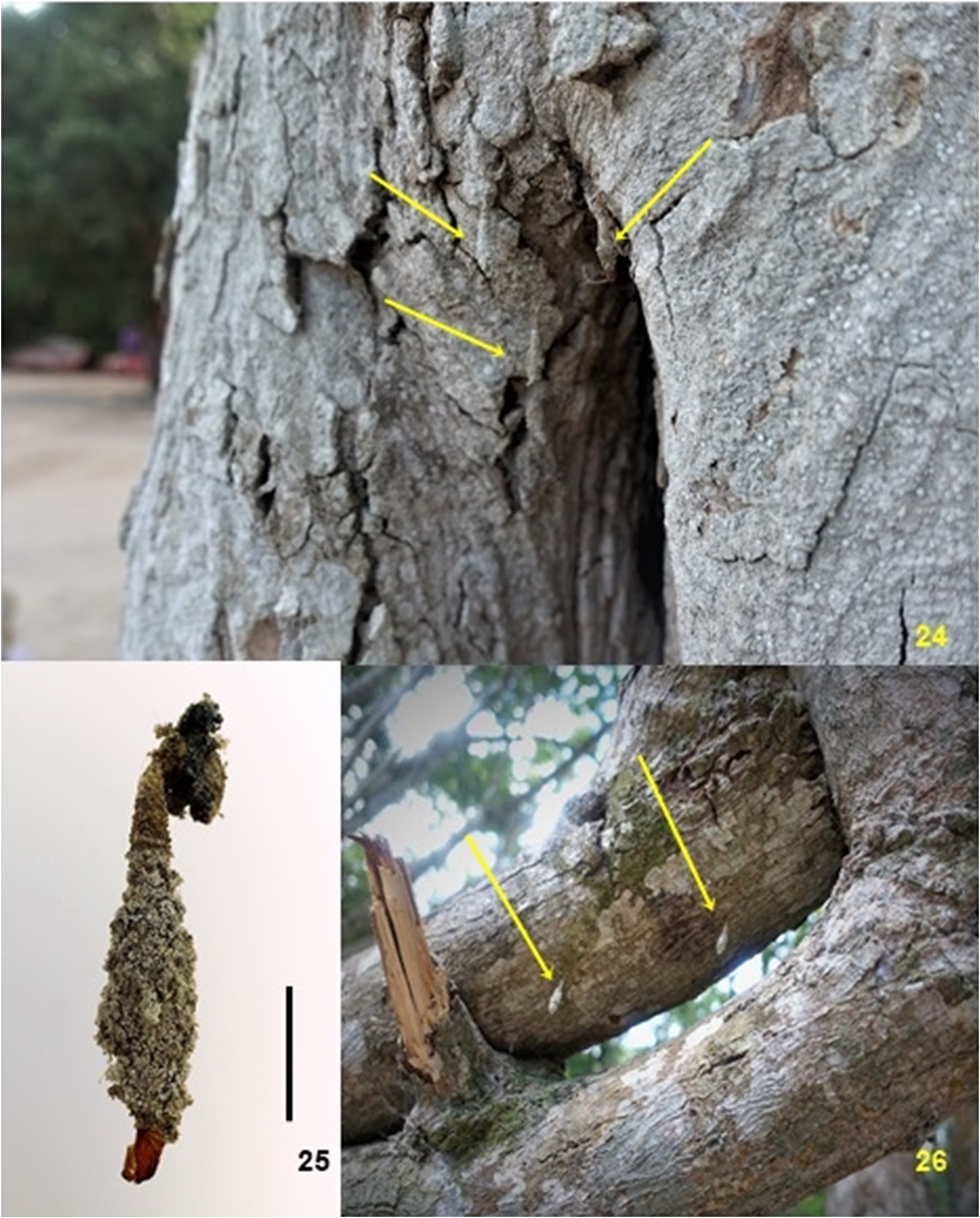