As discussed above, the first pilisuсtorid cilate was discovered and described of Averinzeff (1916) as Mycodinium fucatum  ( Fig. 1View FIGURE 1 A). The species was found in the Adriatic Sea near Trieste ( Italy) (type locality) on antennae and legs setae of amphipod crustacean Caprella  sp. (type host). Some characters as cylindrical shape of cells, elongated nucleus and reproduction by division, with 3 to 4 tomites produced, were emphasised by Averinzeff (1916). However no information of dimensions of described organisms was provided by the author.

According to Chatton and Lwoff (1934) diagnosis, the trophont of C. pilisuctor  is elongated and lacking of ciliature. The infraciliature is arranged in two fields almost symmetrical about the sagittal plane. There is one macronucleus and one micronucleus, but no morphology of the macronucleus was done.

The trophont stage by successive linear division produced 2 to 3 (rarely from 5 to 6) ciliated disk-shaped tomites ( Fig. 3View FIGURE 3 A –G), formed at the distal end of the cell body. They argumented that at this stage the ciliate resembles the conidia of parasitic fungi from the families Eccrinidae or Ellobiopsidae  .

It was Jankowski (1989) the first who called attention to the synonymy between generic names Conidophrys  and Mycodinium, and Aescht (2001) considered the generic name Mycodinium as a nomen dubium, but Averintzeff (1916) name was based on detailed diagnosis and drawings, then the type species of genus, M. fucatum  can be fixed by monotypy.

Dovgal (2003 a) in turn submited a proposal to the International Commission on Zoological Nomenclature to keeping the name Conіdophrys  as nomen protectum, and the name Mycodinium must referred as nomen oblitum. The International Comission took a decision in accordance with this proposition (Opinion 2106, ..., 2005). Under mentioned decision the name Mycodinium Averinzeff, 1916 was hereby suppressed and placed on the Official Index of Rejected and Invalid Generic Names in Zoology whereas the name Conidophrys Chatton & Lwoff, 1934  with type species C. pilisuctor Chatton & Lwoff, 1934  , and the name Conidophryidae Kirby, 1942  with type genus Conidophrys  were hereby placed on the Official Lists of Generic Names and Family-Group Names in Zoology.

Jankowski (2007) did not accept the recommendations of the International Commission on Zoological Nomenclature and continued using the generic name Mycodinium, and moreover, believed that both M. fucatum  and M. pilisuctor  are valid name combinations. Jankowski (2007) opinion is that representatives of Conidophryidae  are species-specific parasites assigning specific names to conidophryid ciliates which can differ only by inhabiting on different host species.

However, in our opinion there are no enough morphological differences between M. fucatum  and C. pilisuctor  . The cell body and macronucleus shape are similar, the attachment mode to the host setae, and division process are also similar in both species, and differences in the swarmer morphology of two species have not been observed. Accordingly, C. pilisuctor Chatton et Lwoff, 1934  syn. n. is a junior synonym of C. fucatum ( Averinzeff, 1916)  comb. n. This combination for C. fucatum  already has been used ( Dovgal and Boshko 2007), as the senior synonym of C. pilisuctor  but without discussion on synonymy ( Chatterjee et al. 2013).

We consider Conіdophrys Chatton et Lwoff, 1934  as a valid generic name, with type species of genus as C. pilisuctor  (as a junior synonym of M. fucatum  ).

Conidophrys fucatum  is probably a widely distributed species, as it has been observed in different regions on representatives of various crustacean taxa ( Mohr and Leveque 1948; Moore 1981). Jankowski (2007) has recorded to Conidophrys  individuals in the Atlantic and Pacific oceans, near Tierra del Fuego coast, and in the subantarctic waters attached to isopods, amphipods, decapods and mysids; Lynn (2008) reported to C. fucatum  on soil mites, an unusual host taxon.

Other records for conidophryids corresponds to Ólafsdóttir and Svavarsson (2002) on deep-water isopod, and for amphipod Melita petronioi Senna et al., 2012 ( Chatterjee et al. 2013).

One further species, Conidophrys guttipotor Chatton et Lwoff, 1936  ( Fig. 1View FIGURE 1 E,F) from isopod crustacean Sphaeroma serratum (Fabricius, 1787)  from lagoon L’etang de Thau ( France) was described ( Chatton and Lwoff, 1936), whose trophont stage differs from C. fucatum  in size, has a thickened covering, and cell body is bent by ventral outward. According to Chatton and Lwoff (1936), Conidophrys guttipotor  from S. serratum  were attached to short host secretory setae, the bottom of ciliate envelope formed an elongated stalk-like structure with numerous folds which completely covered the seta, which resembles the attachment to the short setae observed in C. fucatum  , in particular, from the amphipod crustacean J. falcata  , but without special stalk-like structure ( Fig. 1View FIGURE 1 D).

Moreover, Chatton and Lwoff (1936) reported that some individuals of C. guttipotor  were attached to any point along the length of non-secretory setae ( Fig. 1View FIGURE 1 F), concluding that conidophryid ciliates from isopods may have different mode of feeding than the species living on amphipods. However, we believed that its possible that some individuals were detached from host body accidentally and engaged to any host setae.

Jankowski (2007) considered C. guttipotor  as a valid species name, but he cited the figure of C. guttipotor  after Chatton and Lwoff (1936), denoting the species as Mycodinium sp.

It should be noted that the mode of trophont attachment to host body in C. guttipotor  as well as some peculiarities of the morphology of species, are very similar to Conidophrys  sp. found by Jones and Khan (1970) on isopod Jaera albifrons Leach, 1814  from Pembrokeshire (Black Tar Beach, Milford Haven, South Wales) ( Fig. 1View FIGURE 1 G –I), but spite to some differences such as the different mode of attachment to the host, and the presence of a trophont stage with a permanent funnel-shaped opening ( Jones and Khan 1970), we believe this species can be previously identified as a C. guttipotor  , despite the trophont and tomite dimensions are missing, based on size of the macronucleus (and proportion to the cell), and well-defined longitudinal folds of stalk.

Jones and Khan (1970) also emphasized that Chatton and Lwoff (1936) described that some representatives of genus Conidophrys  attach to the host body with stalk-like structure, and argumenting that the stalk of the studied species (without any setae inside of stalk), is more similar to the stalks of suctorian and chonotrich ciliates, but C. guttipotor  was not considered.

Jankowski (2007) (only in figure 373 on page 880) assigned the new name combination Mycodinium (= Conidophrys  ) jaerae  to conidophryid ciliate found by Jones and Khan (1970). However both the diagnosis or labeling "sp. n." were not provided. Hence the name M. jaerae Jankowski, 2007  is an unavailable in accordance with Article 16.1 of the International Code of Zoological Nomenclature (International ..., 1999).

Jankowski (1966 a) reported the discovery of three new species of genus Conidophrys  on intertidal crustaceans ( Gammarus oceanicus Segerstråle, 1947  , Marinogammarus obtusatus (Dahl, 1938)  and hermit crab Pagurus bernhardus Linnaeus, 1758  ) from the Barents Sea near village Dalnie Zelentsy. However, only the diagnosis of C. enkystotrophos Jankowski, 1966  from G. oceanicus  was published, but trophont figures were included later ( Jankowski 1972, 2007) ( Fig. 1View FIGURE 1 J). Jankowski (2007) also recorded to G. setosus Dementieva, 1931  from the same locality, as a host for C. enkystotrophos  .

According to Jankowski (1966 a), C. enkystotrophos  differs from other species of the genus by its attaching mode to the setae and its crimped band-like macronucleus. The ciliate is clamped parallel to the seta, whose tip is bent 180 degrees with respect its longitudinal axis.

Bradbury (1975) described to C. pіtelkae Bradbury, 1975  from shrimps ( Fig. 1View FIGURE 1 K –N), collected near Roscoff (type locality) and Penpoull ( France). The trophonts of the species vary from tiny tear-drop-shaped to long, slender forms. However, unlike to other representatives of the genus, C. pitelkae  produces only a single tomite; a long, serpentine, with fun-shaped distal widening macronucleus is characteristic for the species.

Bradbury and Tyson (1982) emphasize the ability of cyst in C. pіtelkae  to grow with the ciliate cell body, due to the presence of short folds in the cyst walls formed during its secretion through tomite metamorphosis. Thereupon these folds are straightened during cell growth. As the growth of cyst and cell body has been reported in various pilisuctorid taxa ( Chatton and Lwoff 1936; Deroux et al. 1975), we consider is a common process to all cystte Pilisuctorida.

The new species name C. marinogammari Jankowski  (in press) for Conidophrys  from Marinogammarus obtusatus  was done by Jankowski (2007, p. 887). However this name is nomen dubium because was not accompanied by species diagnosis or figure. 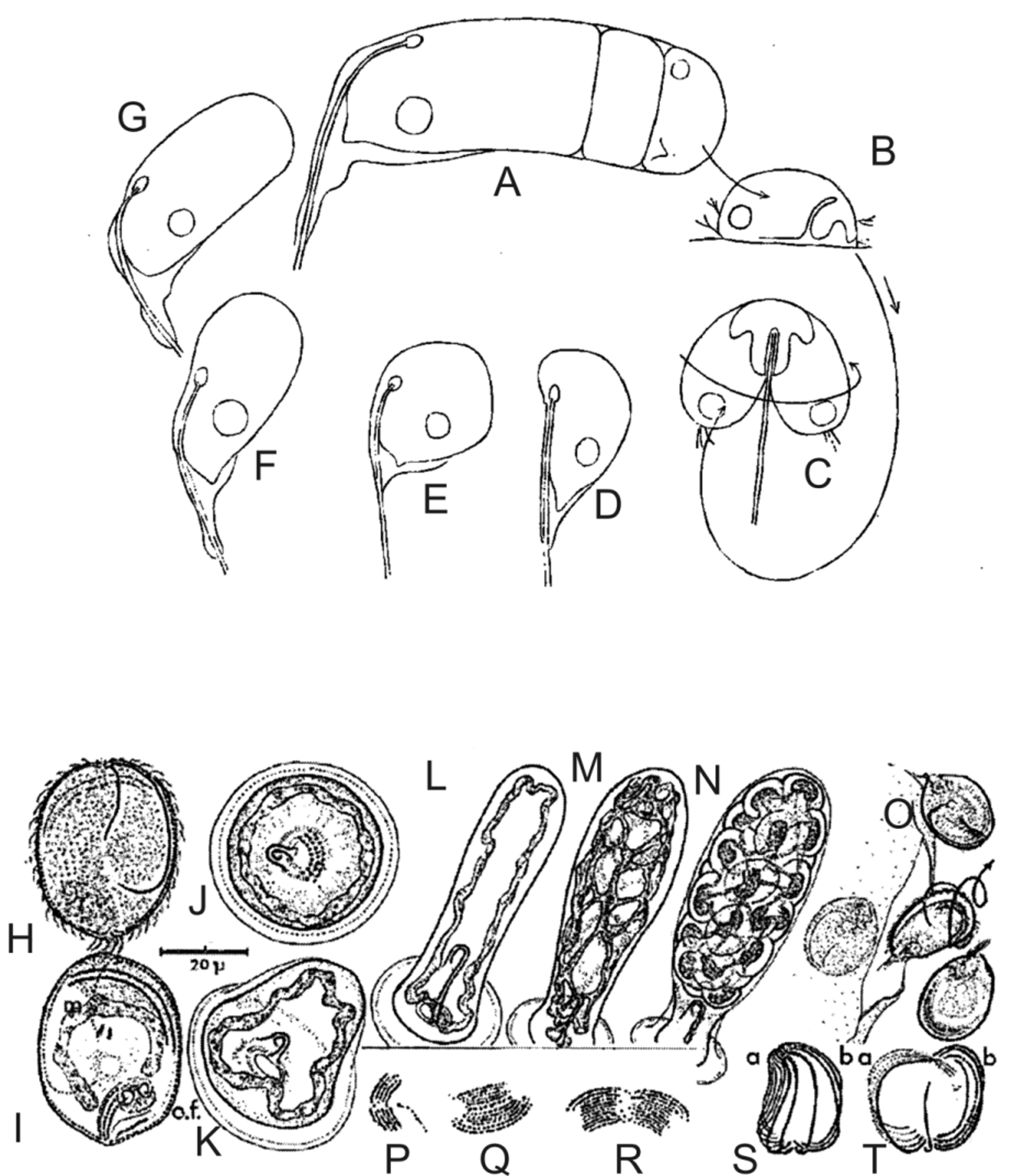