Male with pair of short but developed pleopods modified as gonopods on second abdominal segment.

Remarks. Dana (1852) did not specify the type locality of Porcellana biunguiculata   and the type specimen is apparently lost (see Deiss & Manning 1981). Therefore, the male specimen from the Loyalty Islands (CL 2.8 mm, MNHN-Ga 6466) is herein selected as the neotype of Polyonyx biunguiculata   to fix its identity.

The specimens examined agree well with the original description and figures of P. biunguiculatus   by Dana (1852, 1855), especially on account of the larger chela being rather smooth on the dorsal surface ( Fig. 10 View FIGURE 10 A, B, F, G). Although Dana (1852) did not indicate the sex of the specimen, it seems to be a male because of the possession of a large proximal tooth on the cutting edge of the fixed finger ( Fig. 10 View FIGURE 10 B). The female lacks such a large tooth ( Fig. 10 View FIGURE 10 G). The smooth condition of the larger chela in males is also illustrated for Hong Kong material of P. biunguiculatus   ( Haig 1992, fig. 16 C), whereas the chela is figured as rather tuberculate on the fixed finger in the material from the Moluccas and Gulf of Thailand ( Haig 1979: fig. 19; Yang & Naiyanetr 1997: fig. 4 D).

Haig (1964) showed that P. biunguiculatus   could be distinguished from P. obesulus   by the dactyli of the ambulatory legs each with two small spines on the flexor margin and the absence of pleopods in males, based on an examination of a good series of P. biunguiculatus   from the Indo-Malayan area. The absence of pleopods in males was also confirmed in the Western Australian and Moluccas material ( Haig 1965, 1979). However, Haig (1983) showed that this character was less reliable than she had supposed since the all males from the “Reves 2 ” collection from the Seychelles have well-developed pleopods.

The smooth larger chela and presence of male pleopods are species-specific characters for the true P. biunguiculatus   , and the specimens with tuberculate chelae and no pleopods in males represent a different, undescribed species. It is likely that the material from the Seychelles and Hong Kong reported by Haig (1983, 1992) belongs to true P. biunguiculatus   , whereas the specimens from the the Indo-Malayan area, Moluccas, Gulf of Thailand, and Western Australia reported by Haig (1964, 1965, 1979) and Yang & Naiyanetr (1997) are an undescribed species; although the true identities of these specimens need re-examination. On the other hand, re-examination of the specimens from Palau ( ZLKU 10318, 11 specimens) reported by Miyake (1942) showed that they had small tubercles on the base of the fixed finger of each cheliped and no pleopods in males, and thus belonged to the undescribed species.

Baba (1989) recorded P. biunguiculatus   from the Ryukyu Islands and noted that the coloration of the specimens is different from that provided by Miyake (1942). His specimens were totally reddish with irregular reticulation of white, and had the carapace with a rough longitudinal stripe of white color, whereas Miyake (1942) noted the dorsal surface (of the carapace) to be light orange yellow, the ventral (surface) whitish. New material with information of coloration would help to distinguish the P. biunguiculatus   species complex.

In the female specimen examined, the dactylus of the right second ambulatory leg is largely deformed and does not show a bifurcate form as seen in other ambulatory dactyli ( Fig. 9 View FIGURE 9 I). 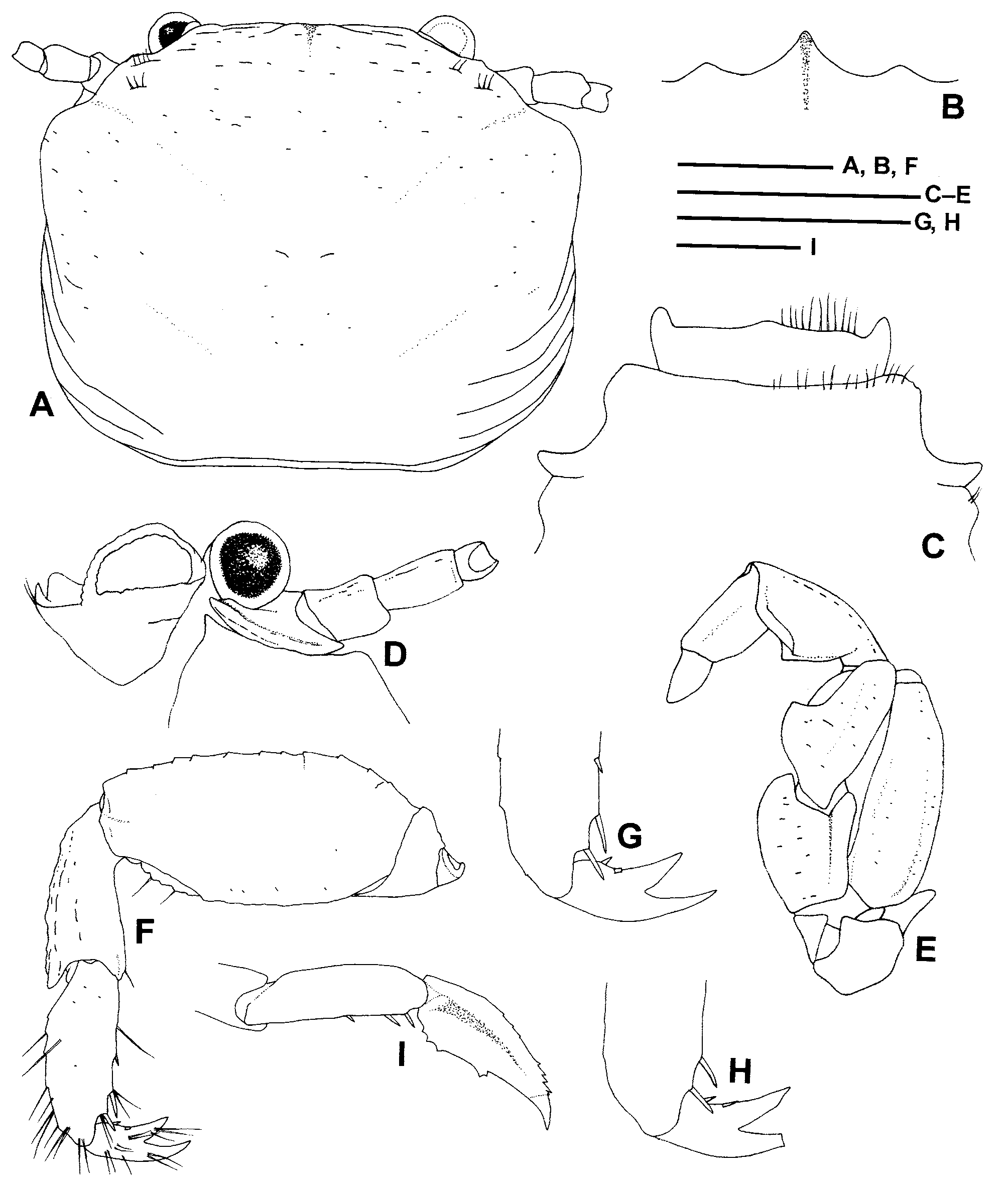 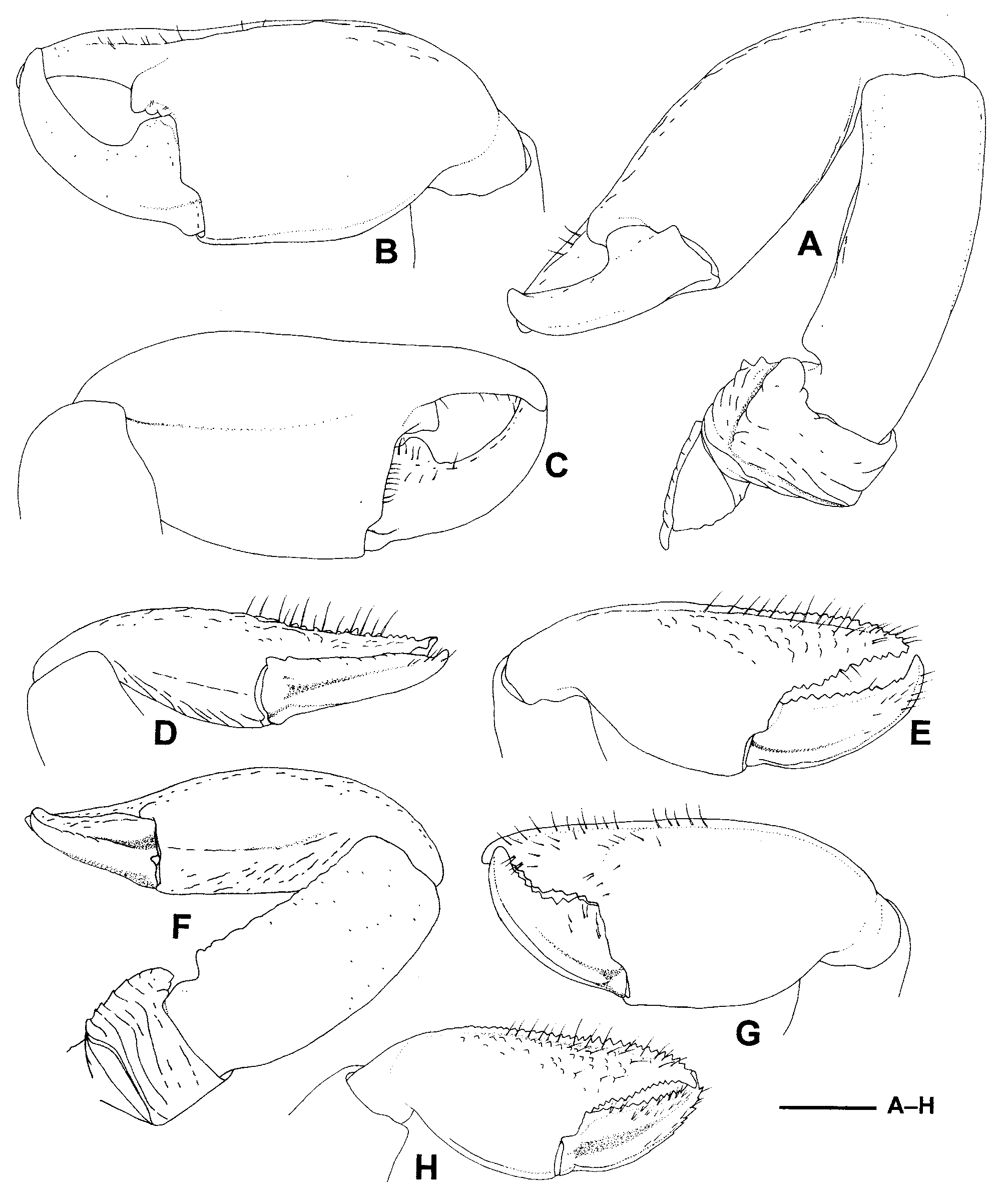