Note: The type specimens were collected by Charles Millingen, M.D., Edinburgh at around the 1870ies (labels with collector “Millingen” exist with localities El Hejaz / Hajaz, Jeddah and Yemen, and the name is sometimes printed “Millinger”).

Etymology: The specific epithet is the Latin adjective for “hidden” or “undiscovered”. It refers to the fact that this species remained undiscovered for more than 100 years until a second specimen was discovered.

Additional description of female paratype: The description of the male holotype specimen fits also to the female paratype, with a few additions as follows. The pubescence is partially rubbed off; the cephalic pores are virtually absent and at close inspection only recognizable as a minute, longitudinal, slightly darkened structure, possibly a remnant of part of the pores’ margin; eyes little smaller than in male and hardly vaulted; hind tibiae even shorter and wider than in the male; the gonocoxae were dissected, the diverging tips are of normal shape of Paussus   s.l.;

Ecology: The female paratype specimen was sampled in the African pencil cedar woodland at 2578 m in the GRNR ( Figure 3 View FIGURE 3 ). Description of habitat see chapter “study area” above. The specimen was recovered from a pitfall trap.

Remarks. The new species is assigned to Paussus   subgenus Hylotorus Dalman, 1823   , according to the phylogenetically based classification of Robertson and Moore (2016) (cf. Nagel et al. 2017a). The description of P. abditus   sp. n. given here above matches generally well the diagnosis and characters used in their key. Deviations are the very long and narrow labial palpomere III and the slightly higher number of setae at the anterior margin of the lacinia in the present new species.

Paussus (Hylotorus) abditus   sp. n. is a member of the P. cucullatus   group sensu lato, an African lineage of Paussus subgen. Hylotorus   . The new species is distinguished from the Afrotropical P. cucullatus   group s. str. (all species considered in the key of Nagel (2006), including the recently described P. huamboensis Schüle & Bednařík, 2015   ) by its tumid antennal club with much smaller excavation, the low anterior part of pronotum and the vestigial cephalic openings. Paussus excavatus   has an elongated, flattened antennal club and well-developed cephalic openings. Paussus conradti Kolbe, 1896   , also has the cephalic openings present, with the anterior basal angle of the antennal club obliterated and the lower (posterior) pygidial margin set with a series of separated long tufts of hair ( Nagel 2006; Fig. 2 View FIGURE 2 ).

Paussus abditus   sp. n. is similar to P. cyathiger Raffray, 1886   ( Ethiopia), the holotype and one paratype of which was made available to us due to the courtesy of Ms. Taghavian-Azari (MNHN). This new species differs from P. cyathiger   mainly by the posterior basal angle produced into a broad process rather than a thin, long peg as in P. cyathiger   .

NB: the specimen illustrated and cited as P. cyathiger   by Luna de Carvalho (1974, 1989) is a still undescribed species. The head of the actual P. cyathiger   is devoid of an anterolateral trichome (setose pad), the upper and hind margins of the antennal club are both devoid of tubercles or teeth, and the posterior basal angle of the club is produced into a long, thin, apically blunt peg.

Paussus abditus   sp. n. seems to be most similar to Paussus rougemontianus Lorenz, 1998   ( Yemen) (replacement name for Cochliopaussus rougemonti Luna de Carvalho, 1989   ). The antennal club of P. rougemontianus   has the posterior excavation shallow and restricted to the basal half of the club.

According to the current state of knowledge four species are exclusively known from the Arabian Peninsula sensu lato and are possibly endemics (END_AR): P. abditus   sp. n. (only known from SA), P. brittoni   , P. cephalotes   , P. rougemontianus   . Their range comprises Yemen and the Hejaz and Asir mountains in KSA which run parallel to the Red Sea coast. 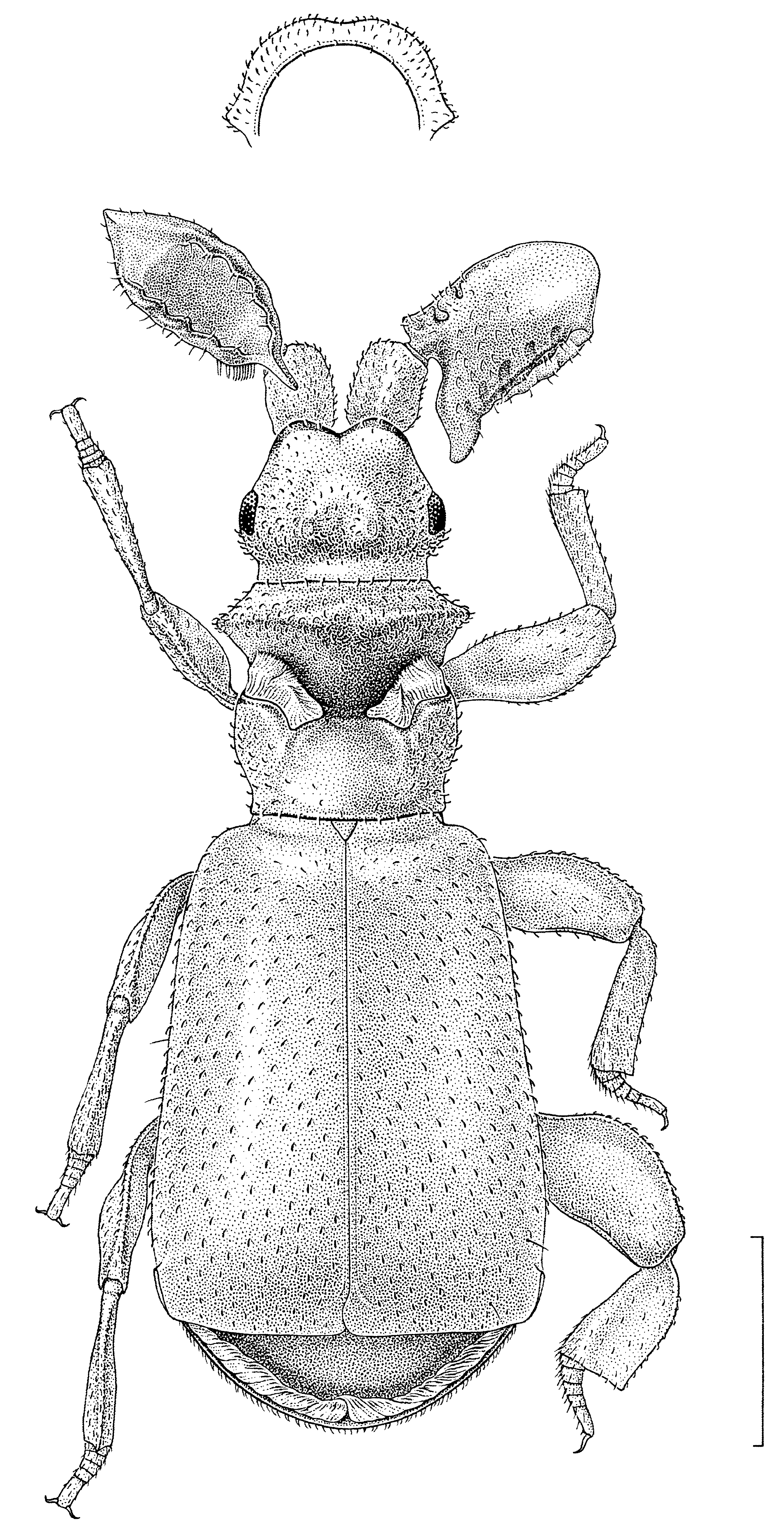 FIGURE 2. Paussus (Hylotorus) abditus sp. n. holotype specimen from the Hejaz mountains. The illustration shows the specimen with the appendages of the right side at their broadest view, while the left antennae and legs are shown twisted through 90 degrees, i.e. at their narrowest view (cf. Nagel 2006). The inset shows the “collar” of the anterior pronotum at frontal view. Scale bar: 1 mm. Illustration: E. Weber, Basel, Switzerland. Copyright: P. Nagel.

FIGURE 2. Paussus (Hylotorus) abditus sp. n. holotype specimen from the Hejaz mountains. The illustration shows the specimen with the appendages of the right side at their broadest view, while the left antennae and legs are shown twisted through 90 degrees, i.e. at their narrowest view (cf. Nagel 2006). The inset shows the “collar” of the anterior pronotum at frontal view. Scale bar: 1 mm. Illustration: E. Weber, Basel, Switzerland. Copyright: P. Nagel. 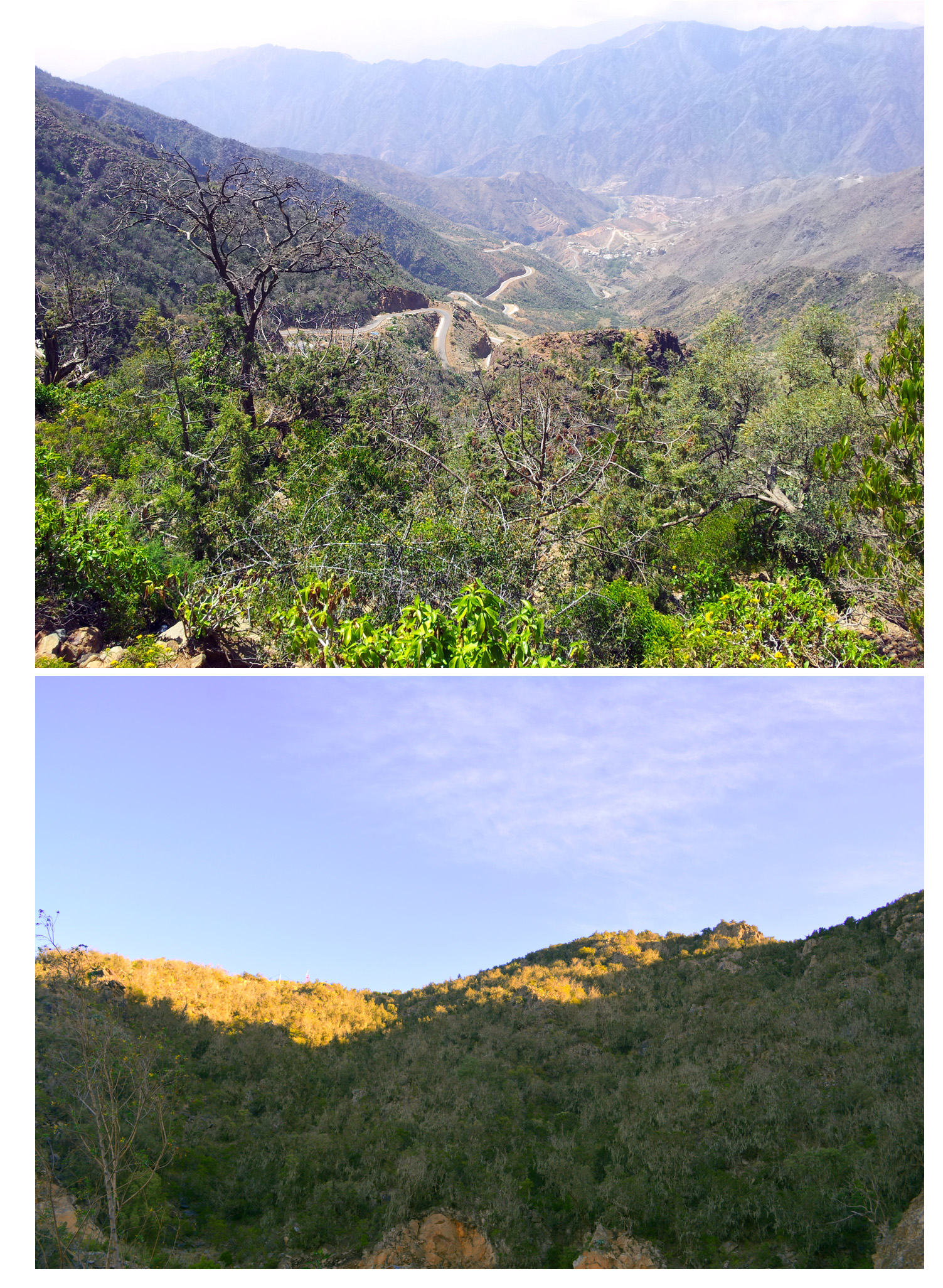 FIGURE 3. Photographs of the type locality for paratype of Paussus (Hylotorus) abditus sp. n. in the African pencil cedar woodland at 2578 m, at Garf Raydah Nature Reserve, Asir Province, southwest of the Kingdom of Saudi Arabia.