Condition: The lectotype is slightly damaged: last seven articles of right antenna and last three tarsomeres of both left and right legs are missing.

Diagnosis. Pronotal surface densely punctuate in anterior half, densely granulate in posterior half; meso-tibiae strongly arcuate near base, then straight until tip.

Female. All external morphological characters as in male, except for mesotibiae and metatibiae feebly curved near base, for absence of teeth on inner side of metatibiae and for admedian carinae not elevated to posterior margin of ventrite I.

Comparative notes. In a recent paper, Passos et al. (2015) proposed a new species groups definition for the Macrelmis  genus, in which all six known species groups are redefined and rearranged and four new ones are proposed, for a total of ten species groups, based mainly on the morphology of the male genitalia. In the present work, we follow their new species group definition. According to the new definition of the granigera species group Hinton, 1940, M. germaini  , until now a member of this group ( Hinton 1945a), cannot be included in this latter group for the different shape of male genitalia: it has neither aedeagus with truncated apex, nor a constriction two thirds before the apex. After a careful examination of the shape and size of parameres and aedeagus, we finalize that M. germaini  cannot be placed in any of the ten groups of species (see “Diagnostic character” for each group in Passos et al. 2015). Moreover, M. germaini  differs from M. bispo Barbosa et al., 2013  , M. immsi ( Hinton, 1936)  and M. saltensis Manzo, 2003  (all species not assigned to any group by Passos et al. 2015) by its aedeagal morphology: M. bispo  has parameres shorter than aedeagus with rounded apex; M. immsi  has a very broad aedeagus longer than parameres; M. saltensis  has parameres distincty shorter than aedeagus with lateral setae on apical half. Within the species without male genitalia known, M. germaini  differs from M. aequalis (Hinton, 1937)  , M. pubescens ( Grouvelle, 1889)  and M. bicolor (Hinton, 1939)  by presence of pronotal sublateral carinae; from M. robusta (Sharp, 1882)  by pronotum with punctures and granules; from M. antiqua ( Grouvelle, 1896)  , M. granosa ( Grouvelle, 1896)  and M. peruviana (Hinton, 1945)  by pronotum with sublateral carinae extending from base to almost apex, not extending to the anterior fifth of sides as in M. granosa  and M. peruviana  or very short as in M. antiqua  . Finally we don’t make any comparison with M. coquereli ( Grouvelle, 1889)  , M. dentata Motschulsky, 1859  , M. moesta (Horn, 1870)  and M. texana (Schaeffer, 1911)  , lacking illustrations and adequate descriptions. As M. germaini  has an unusual shape of male genitalia it should be considered as belonging in its own group. Its aedeagus tapers towards the apex and is slightly shorter than the parameres ( Figs. 6, 7View FIGURES 6 – 7). The latter, in dorsal view, are wide, narrower in the middle, with their basalmost inner angles rounded as well as their inner margin a little before apex ( Fig 6View FIGURES 6 – 7). Also, we include Macrelmis elicioi Monte & Mascagni, 2012  , whose genitalia are similar to those of M. germaini  , in the germaini  species-group, although M. elicioi  was originally assigned to the graniger species-group by Monte & Mascagni (2012). Unfortunately, Passos et al. (2015) did not mention M. elicioi  .

Remarks. Grouvelle (1896) did not mention the number of specimens and their sex in the original description of Cylloepus germaini  from “ Bolivie: Province de Cochabamba ”. The type series of Macrelmis germaini  we could see consists of 8 specimens, 4 males and 4 females, all slightly damaged  ; 3 males are without genitalia. 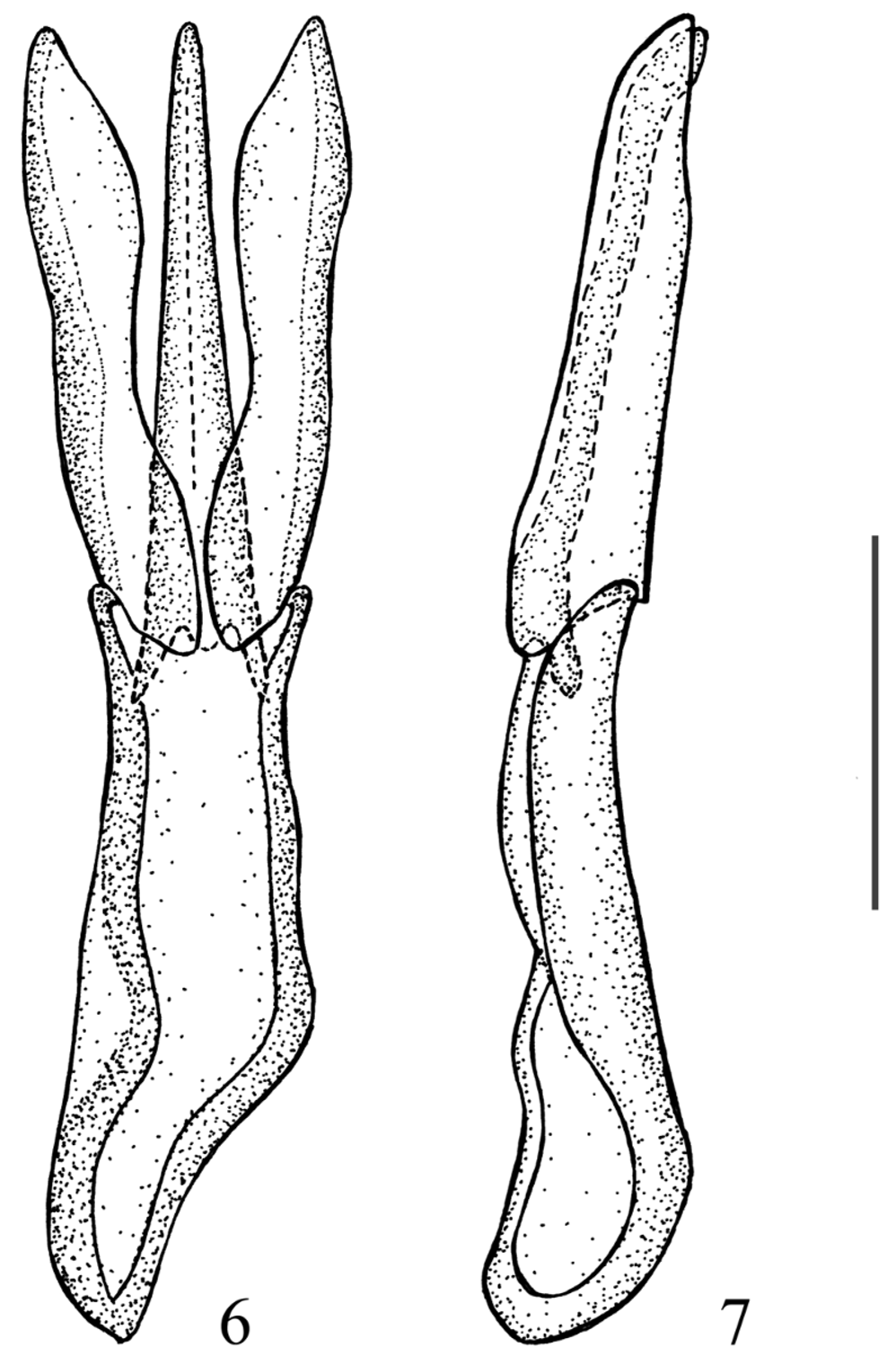