Fifth leg, caudal side. Long distal sensillae on both, left and right coxae ( Figure 6I View Figure 6 ). Right basis with two projections on inner side: one medial semi-elliptical lamella, and one triangular, basal process, plus one fold along medial axis ( Figures 6I View Figure 6 , 7D View Figure 7 ). Right Enp twice as long as Exp1, which bears a chitinous membrane at its posterior edge. Exp2 1.8–1.9 times longer than wide with two curved, short hyaline membranes; aculeus inserted at distal third of the posterior side of the segment. Exp2 is 1.65–1.74 times longer than aculeus; which is armed with spines on medial edge ( Figure 7E View Figure 7 ) and with a curved, sharp tip; terminal claw very long, bent, with looped sharp tip ( Figure 7F View Figure 7 ). Right Enp unsegmented bearing two long setae and one oblique row of tiny spines. Left leg with quadrangular basis and bi-segmented Enp. Left Enp with two spines plus one row of setae on its tip ( Figure 6I View Figure 6 ). Bi-segmented Exp; Exp1 is

The species is named after Eduardo Suárez-Morales, in recognition for his extensive contribution to the knowledge of the marine and freshwater copepods of Mexico and the world.

The specimens examined here, were included under the genus Mastigodiaptomus Light, 1939   because of the possession of the following morphological features (1) segment 11 of both female antennules and left male antennule with two setae; (2) coxa of female P5 with a long, spatulated sensilla; (3) one lateral spine on Exp1P 1 in both sexes; (4) Enp of right male P5 longer than right Exp1; (5) right male antennule with spiniform process on segments 10, 11 and 13–16; (6) basis of right male P5 with hyaline lamellae on caudal side.

Mastigodiaptomus suarezmoralesi   sp. nov. does not match any species in the key by Wilson and Yeatman (1959) or in the key by Suárez-Morales and Elías- Gutiérrez (2000). The new species can be distinguished from other known species of Mastigodiaptomus   by the combination of several unique characters such as the wrinkled and striated genital-double somite in females, or the tiny spines on the dorsal surface of urosomal somites in males. The ornamentation of the right basis and Exp2, and the looped tips of the aculeus and terminal claw of the fifth leg in males, or the curved tips in terminal spines of all P1–P4, and the long rostral points in females and males are also relevant diagnostic characters in the new species.

Other morphological differences were found when M. suarezmoralesi   sp. nov. was compared with the eight known Mastigodiaptomus species   , especially in the female urosome and male fifth leg. The morphological comparison is on Table 3.

The dorsal process on the last thoracic segment was absent in all the adult females surveyed here; this character has been recorded as variable in or between populations of M. amatitlanensis ( Wilson and Yeatman 1959)   ; M. texensis ( Wilson 1953)   ; M. albuquerquensis ( Bowman 1986)   ; and M. montezumae ( Santos-Silva et al. 1996)   . Mastigodiaptomus reidae   is another species without this process ( Suárez-Morales and Elías-Gutiérrez 2000). According to Wilson and Yeatman (1959), in M. purpureus   the dorsal projection on the fifth female pediger is always present. 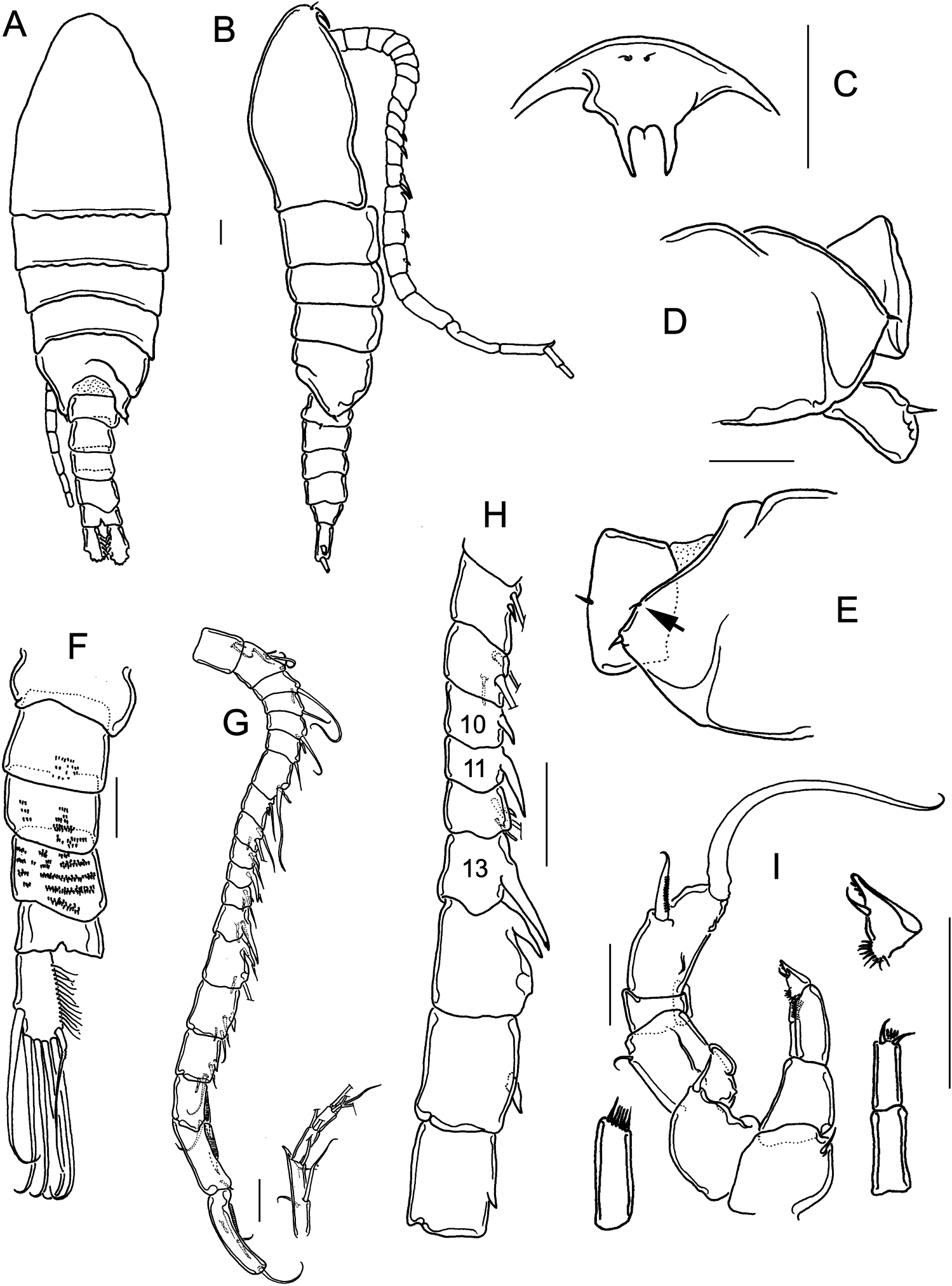