This species occurs in two subspecies, the nominate ssp. ( Figure 25 View FIGURE 25 ) from Senegal to Gabon and western Zaire, and ssp. ophir Evans from Uganda (type locality), the rest of Zaire and Zambia ( Ackery et al. 1995).

Food plants. Larsen (1991) indicates that one species of Hypoleucis   is recorded from Costus   ; this is probably based on MJWC’s records for H. ophiusa   (below). Vuattoux (1999) reared this species six times at Lamto, Côte d’Ivoire from Costus afer   and Paracostus englerianus   (= Costus englerianus   , see Specht & Stevenson 2006).

Larsen (2005) describes finding caterpillars on C. afer   at Obudu Town, Nigeria (Oct 1996): the leaf shelters are made of ‘rolled leaves and the caterpillar devours three-quarters of the leaf before changing shelter, and on this occasion almost defoliated the plant. Pupation took place at the very base of a leaf, attached by the cremaster at the stem of the food plant, without making a shelter’. The lack of a shelter may reflect the lack of leaves rather than normal biology (T.B. Larsen pers. comm. 2015). Vande weghe (2010) gives the food plant as Costus   .

MJWC reared H. ophiusa   in Côte d'Ivoire ( MJWC 89 / 213) and Cameroon ( MJWC 90 / 207) on Costus   sp(p). The food plant in Cameroon was also the food plant of Caenides dacena   and is shown in Figure 28 View FIGURE 28 under that species; it was identified as either Costus afer   or C. lucanusianus   . Caterpillars did not accept Hedychium   sp. ( Zingiberaceae   ) in captivity. The following observations were made on two caterpillars collected in the Forêt du Yapo, Côte d’Ivoire in June 1989 ( MJWC 89 / 213), except the head and spiracle measurements are the average of all material available.

Leaf shelters. The leaf shelters are distinctive; a leaf of about 150-200mm length is cut diagonally at about 1 / 3 from base, from one margin, through the mid-rib to within a 10mm of the other margin; the hanging distal portion is then rolled upwards to make a tubular shelter of about 5mm diameter, and 50-80mm length. The leaf shelter found near Douala, Cameroon ( MJWC 90 / 207) was noted to be similar.

Caterpillar. The penultimate and n- 2 instars are translucent dark green with a black, rugose head, paler ventrally (Figure 26.1); the head of the former measured 0.8 x 1.2mm wide x high, and of the later 1.8 x 2.1mm. The final instar (Figure 26.2 – 3) measured 21mm about half way through the instar; head 2.3 x 3.3 wide x high, indent at vertex, widest towards base; rugose; very light brown with brown line adjacent to epicranial suture and from vertex laterally to stemmata; brown line down centre of each epicranium; half of adfrontals against frons brown. Body dull, translucent green, dorsal line darker; pronotum a narrow black plate on posterior margin T 1, stopping short of the spiracles; spiracles light brown, those of T 1 and A 8 more conspicuous; pale subcutaneous patch around and above spiracle A 8; all legs concolorous except those of T 1 slightly brown.

Pupa. MJWC found that in captivity the pupa is formed in the last caterpillar leaf shelter. No description was prepared of the pupa from life. It is similar in shape to those of Semalea   spp. and Xanthodisca   spp., but the colour is light green apart from a dark dorsal line on thorax and abdomen, brown spiracles and the light brown rim to the spiracle of T 1 ( Figure 27 View FIGURE 27 ). The emerged pupa is white. The rim of spiracle T 1 measures 0.44mm dorsally, 0.42mm ventrally, 0.29mm posteriorly and the hole is 0.34mm wide dorsoventrally. The pupa took 20 days to complete development, while another from Cameroon ( MJWC 90 / 207) took 26 days. 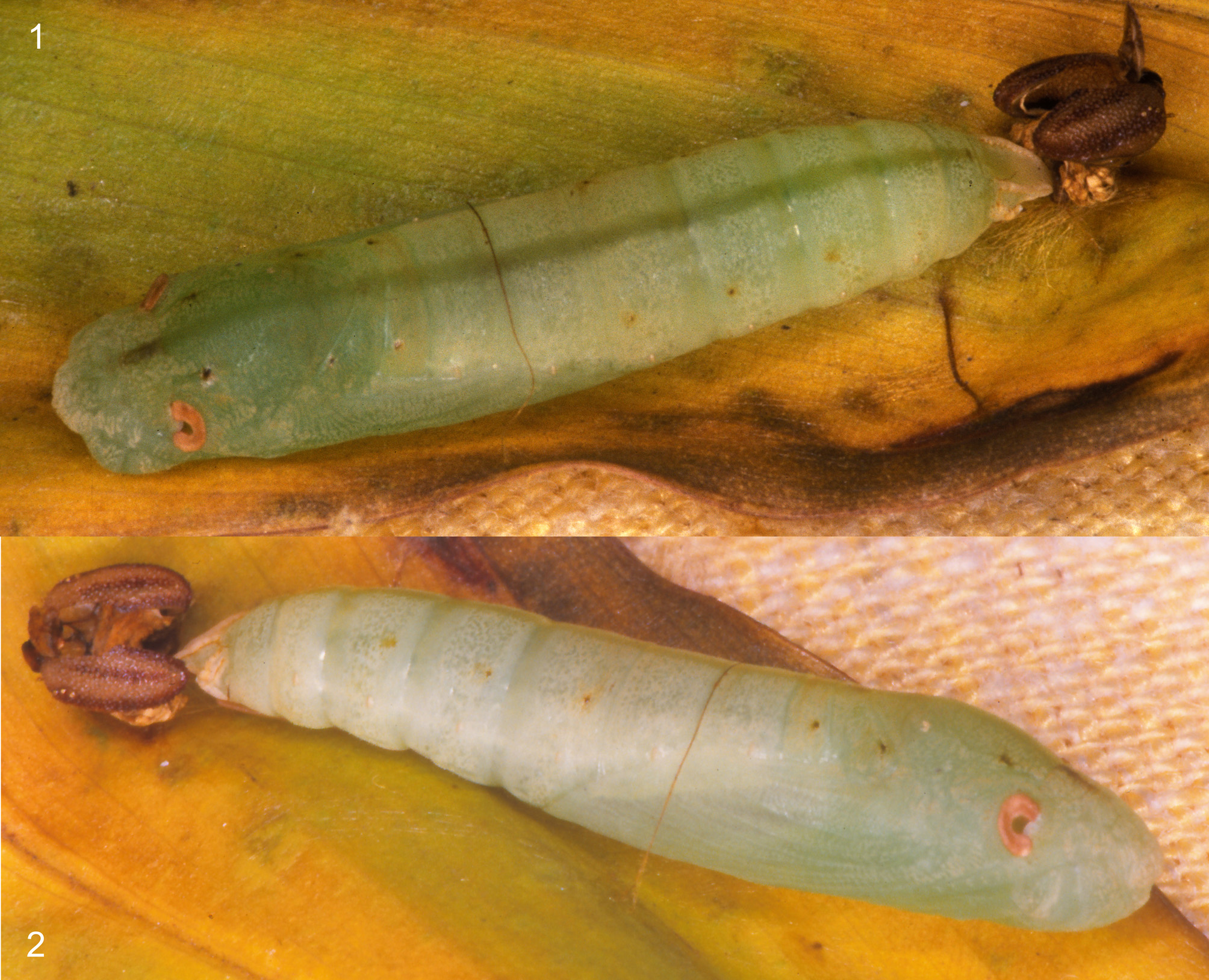