Comments. The general habitus of the male of A. suerre   is most similar to A. chiriqui Stark & Armitage, 2018   described from Panama, but the aedeagal apex of the new species has well-defined subapical membranous lobes, and tibiae and tarsi have yellow markings ( Fig. 2A View FIGURE 2 ). In addition, the lateral lobes in A. chiriqui   are longer, curved and extending laterally unlike the new species ( Fig. 2F View FIGURE 2 ); the dorsal aedeagal keel in A. suerre   is less conspicuous than in A. chiriqui   , and the hammer is shorter, wider and less distinctly thimble shaped. Furthermore, the inner lobes of the subgenital plate of the female adult of A. suerre   are more rounded, not acute, as in A. chiriqui   ( Fig. 2C View FIGURE 2 ). The new species also resembles the widespread Central American A. lineata (Navas, 1924)   , but it has a thimble shaped hammer and lateral view, the dorsal keel of the aedeagus is concave. Adults of A. suerre   also differs from both A. chiriqui   and A. lineata   by having a medial pronotal brown stripe with a medial pale line in both teneral and fully mature specimens ( Fig. 3 View FIGURE 3 ).

Nymph. Body length: 9-10mm. General color brownish in dorsal view, yellow in ventral position. Head brown mainly from ocelli to frontoclypeal region, with lighter areas besides and behind ocelli; “M” line well defined ( Fig. 4A View FIGURE 4 ). Eyes and ocelli dark. Irregular line of setae from dark spots of the base of head to the posterior dorsal region of the eyes. Labrum, labium, right maxillae, and right mandible as in Figs. 4B, 4C, 4D & 4E View FIGURE 4 . Pronotum rectangular with rounded margins, median line pale, with a pale and well-defined pattern. Edge of pronotum with short and fine bristles. Rest of pronotum dark brown, covered by fine, short and dark hairs.

Meso- and metanotum almost alike in color and brown pattern, forming a “v” when mature and pale in apical regions. Median pale spots creating a butterfly-like figure ( Figure 4A View FIGURE 4 ). Rest of meso- and metanotum dark brown, covered by fine, short and dark hairs. Groups of short but width setae are distributed randomly in these structures. Forefemur with a line of 6-7 bristles, close to the front apical area ( Fig. 5A View FIGURE 5 ). Median and hairless line that goes over ¾ of forefemur longitude. Most of forefemur covered by fine, short and dark hairs. Ventral area of coxa as in Fig. 5B View FIGURE 5 .

Comments. The nymph of A. suerre   appears most similar to the known nymphs of A. lineata   and A. varilla Stark, 1998   , but the “M” line is incomplete and pronotum more rectangular with rounded margins, and not as wide anteriorly.

Etymology. The species name refers to the stream where the specimen was collected, located in the upper basin of Río Jimenez, Limón, Costa Rica. It is used as a noun in apposition. 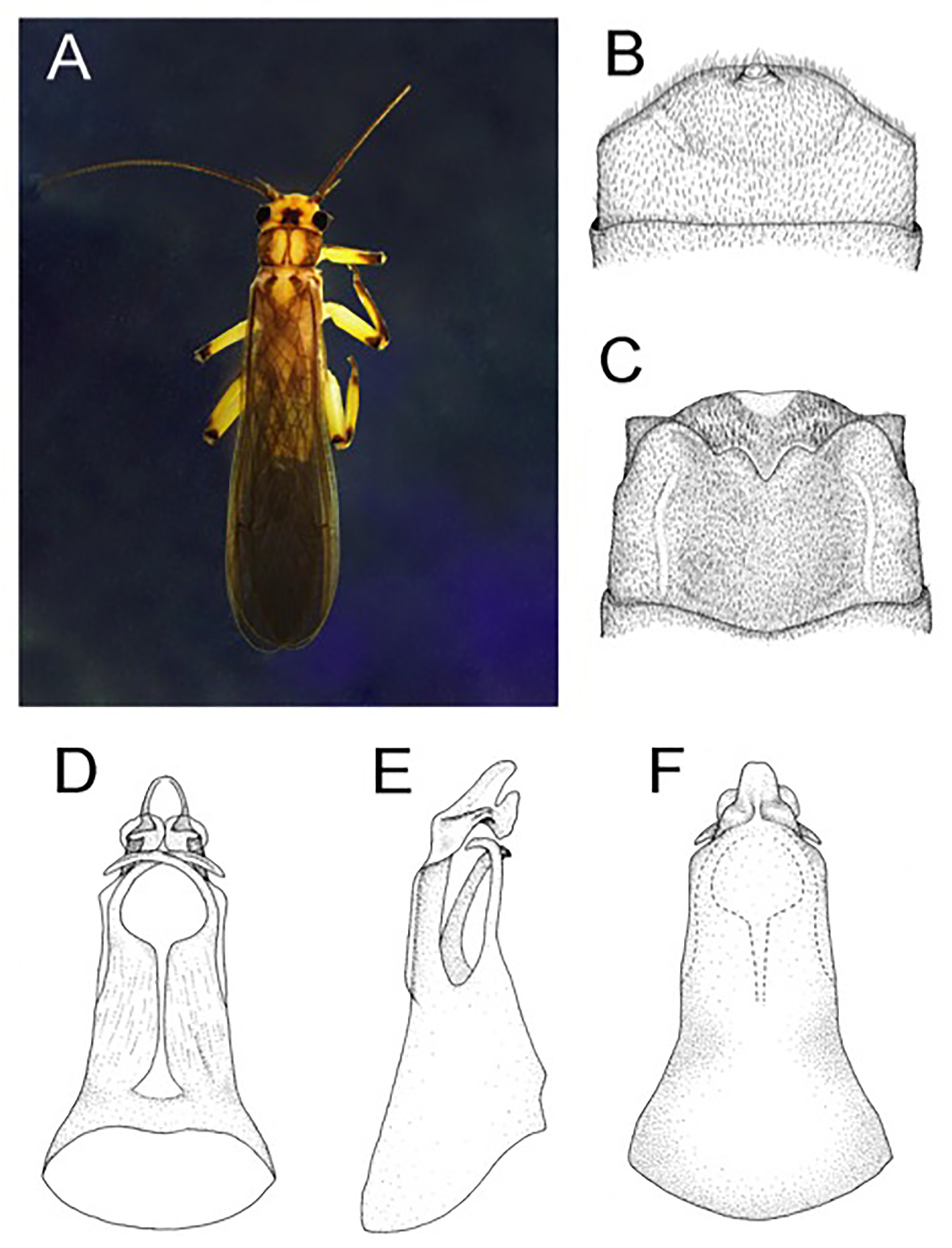 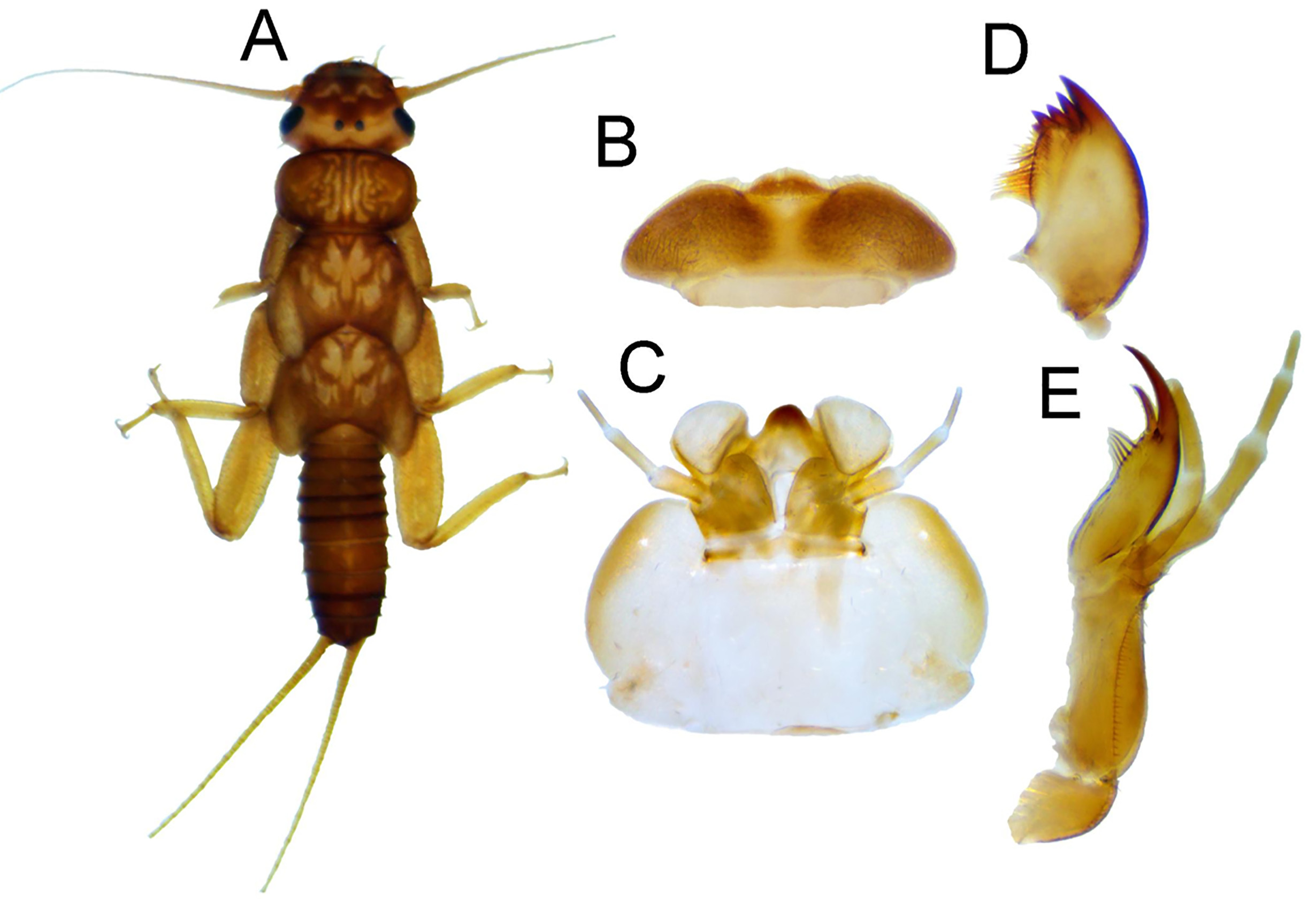 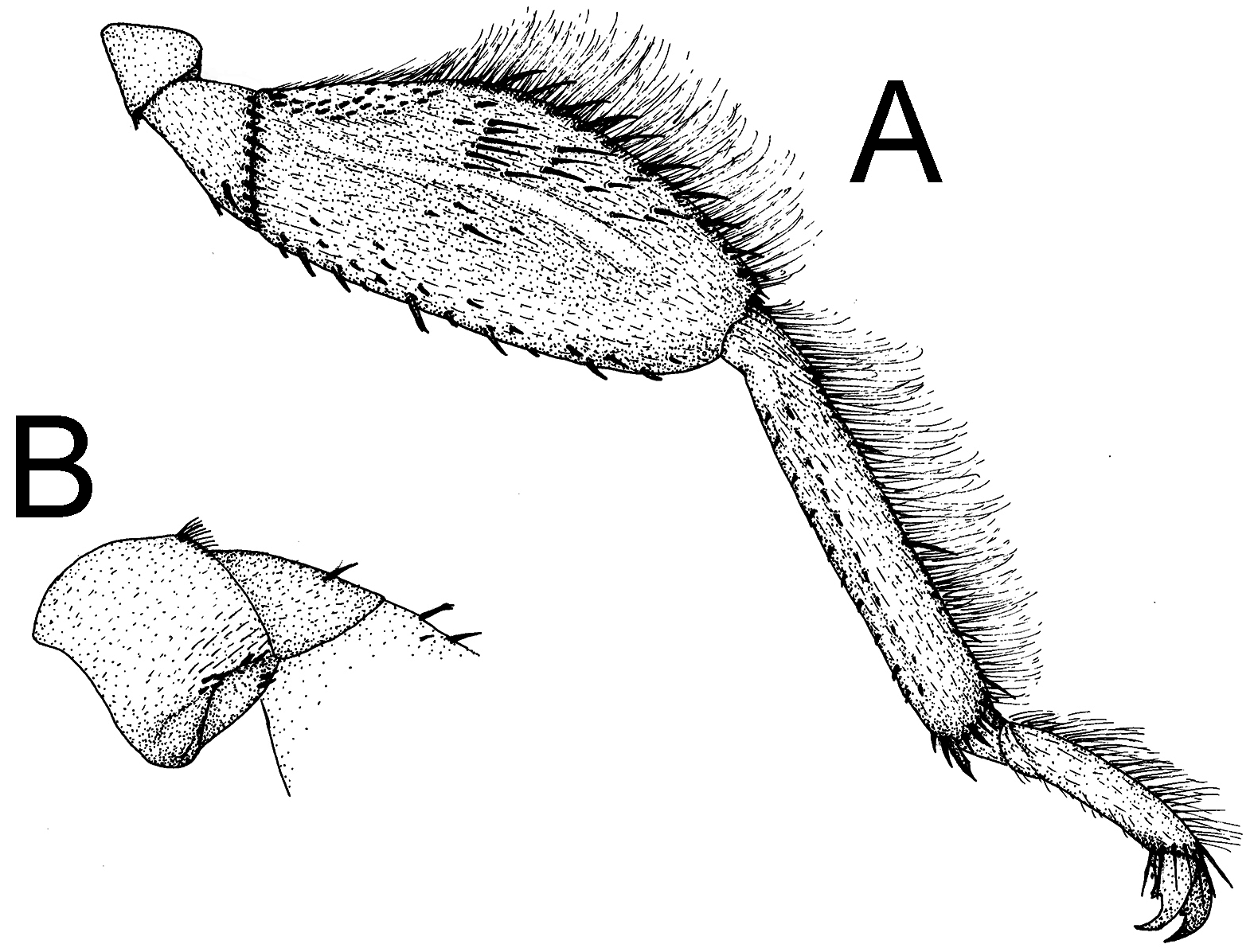