Rt was observed on three of the main islands ( Table 1; Figure 1 View Figure 1 ), and also on many small islands where it is known to be non-native.

On Honshu, one individual was observed for ~5 min in August in a relict grove of giant Japanese horse chestnuts ( Aesculus turbinata   ) at Torii Pass ( Figure 2 View Figure 2 ); it repeatedly carried large rounded objects (presumably horse chestnuts) from the crown of a very large tree to a hollow ~ 20 cm in diameter, ~ 4 m above the ground. Another Rt was observed in September climbing a large oak ( Quercus sp.   ) in Kasuga Primaeval Forest near Nara (the oldest forest in Japan)   . A trackway was found on fresh snow in Yacho-no-Mori deciduous forest near Karuizawa, but that location was within 100 m of residential buildings.

On Shikoku, three Rt were observed in August in Hokigamine Forest Park near Kochi, in a habitat transitional between subtropical evergreen and deciduous forest ( Hämet-Ahti et al. 1974). Two of them were moving through subcanopy tree crowns 4–5 m above the ground, while the third was feeding on acorns ( Quercus sp.   ) on the ground.

On Kyushu, Rt was surprisingly common (eight sightings in two nights) in subtropical evergreen forests around Bonotsu in the far south of the island ( Figures 3 View Figure 3 , Figures 4 View Figure 4 ); all animals were observed in tall shrubs or subcanopy trees 1–3 m above the ground.

In the Ryukyu Islands, Rt was abundant year round in all surveyed forests on Amami- Oshima, Miyakojima and Ishigaki Islands. On Okinawa it was common in small forest fragments in the south but virtually absent from larger forests in central and northern parts of the island, such as Yanbaru National Park. On Iriomote it was apparently rare in natural habitats and confined to forest edges. We also recorded it in remnant forest patches on Ie-jima, Kume-jima, Minami-Daito and Yonaguni, but not on Tokunoshima, Yakushima or Iheya-jima. More than 2/3 of all sightings (N = 137) were in trees. Many rats were observed feeding; identified food items included acorns ( Quercus sp.   ), fruit of itajii ( Castanopsis sieboldii   ), figs ( Ficus sp.   ), and a cave cricket ( Rhaphidophoridae   ). Rt was never found in Ryukyu pines ( Pinus luchuensis   ) or pine-dominated forests that are common on the islands.

Rt was common in forests of Chichijima and Hahajima (Ogasawara Islands); all observed animals (N = 13) were in trees 1–5 m above the ground. The only identified food item was a fig ( Ficus sp.   ).

Exposed arboreal nests, like those known for Rt in the Philippines ( Stuart et al. 2012) and for R. rattus   in the Caucasus region ( Bernstein 1959) and North America ( Reid 2006), were never observed, but 11 animals on Ryukyu and Ogasawara Islands were observed entering and/or exiting tree hollows. All such hollows had entrances 9–25 cm in diameter and were located 2– 4 m above the ground, in trees that were 30–60 cm in diameter at ~ 1.5 m above the ground. 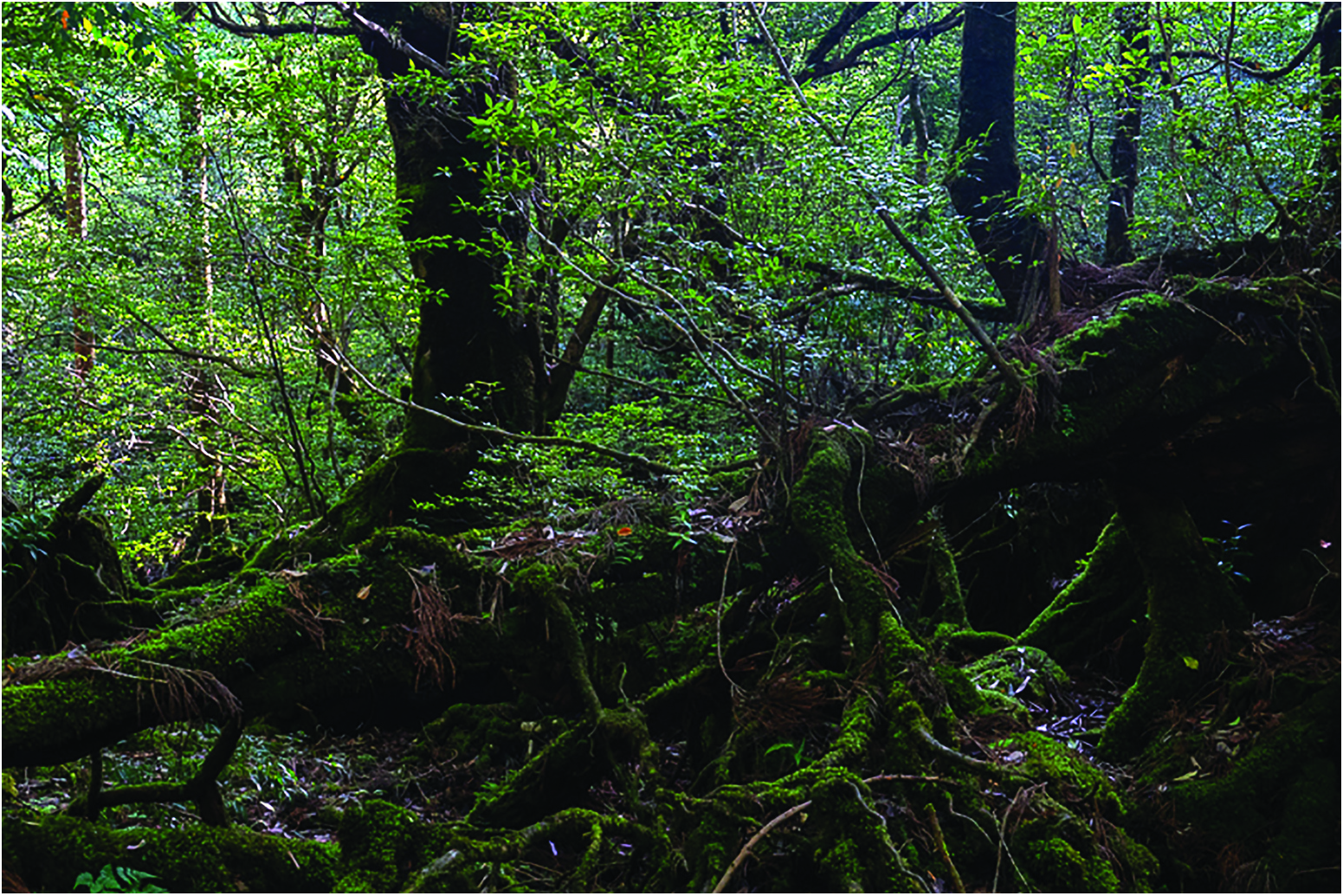