Godwin-Austen (1886: pp. 201‒202). Shell elongately cylindrical, solid, rather tumid, flattened on the frontal surface of the penultimate whorl; sculpture regularly closely costulate; colour dull umber-brown; suture moderately impressed; whorls 6, penultimate the largest with sides flat, the next much smaller and convex; aperture perpendicular; peristome very thick, double, both continuous, but the outer only has a thin callus on the whorl. The sutural tube has its origin on the upper outer margin close upon the outer lip, is colourless, and turns sharp downwards behind it, extending to nearly the height of the last whorl. This peristomial tube is not a tube in the strict sense of the term, but in section is semicircular, an arch outside resting upon the body-whorl, which forms the diameter. An inner sutural tube follows the suture backwards; it opens internally 3 mm within the aperture, it is indistinctly shown on the exterior, but the lines of costulation extend over it (original description published by Godwin- Austen, 1886 in Land and Freshwater Mollusca of India).

Páll-Gergely et al. (2014) discussed the discrepancy in the literature about the direction of the breathing tube in R. assamicus of Godwin-Austen 1886 [1882 – 1920], 1917). During our field surveys and collections, we recorded two R. assamicus shells as described by Godwin-Austen (1886 [1882 – 1920]), which were identified based on the unique characters of the breathing tube which moved sharply downwards along with the peristome margin in the shells ( Figures 1 View Figure 1 , 3 View Figure 3 (b ‒ d), 4). However, as opined by Páll-Gergely et al. (2014), the taxonomy of the genus Rhaphaulus is far from being well resolved, in the absence of adequate collections in any natural history museums or fresh collections from field. Therefore, the use of a modern technique (photomicrography) in addition to physical examination of the characters of the specimen is considered to be important when reviewing the natural history information.

Rhaphaulus assamicus was reported in 1886 from Brahmakund, also known as Parshuram Kund, in Arunachal Pradesh, India. In India, there are five valid species of Rhaphaulus , all of which are known from the type locality only ( Godwin-Austen 1886 [1882 – 1920], 1917; Gude 1921). Páll-Gergely et al. (2014) included R. chrysalis (Pfeiffer 1852) (originally Cyclostoma chrysalis ), from eastern India and Myanmar, as an additional species. However, as in the literature, this species has been reported from the Ava [Inwa] and Moulmeni [Mawlamyine] in Myanmar, and there is no documented evidence of its occurrence in India (B. Páll-Gergely, pers. comm.)

The ecology of the Indian pupinid land snails is scarcely known. The altitude of the NNP where these two samples of Rhaphaulus assamicus were documented ranges from 200 m to 4300 m asl, with an annual rainfall of 2500 – 3500 mm. Extensive field surveys are required to assess the population status and the ecology of this species for in situ conservation, as it is categorised as rare and endemic. Additionally, molecular phylogenetic analysis of species within Rhaphaulus could clarify some of the confusion over species boundaries and sympatric ranges in India, as well as validate the descriptions made by Godwin-Austen (1886 [1882 – 1920]) based on shell breathing tubes to distinguish between Rhaphaulus and streptaulus. Figure 1. Photographs of Rhaphaulus assamicus Godwin-Austen, 1886; (a) recorded from Namdapha National Park, Arunachal Pradesh, India (NZSI M.32279/9); (b) from the type locality, Assam, Brahmakund (NHMUK 1903.7.1.3074), syntype; the white arrow shows the path of the breathing tube along the peristome margin.

Figure 1. Photographs of Rhaphaulus assamicus Godwin-Austen, 1886; (a) recorded from Namdapha National Park, Arunachal Pradesh, India (NZSI M.32279/9); (b) from the type locality, Assam, Brahmakund (NHMUK 1903.7.1.3074), syntype; the white arrow shows the path of the breathing tube along the peristome margin. 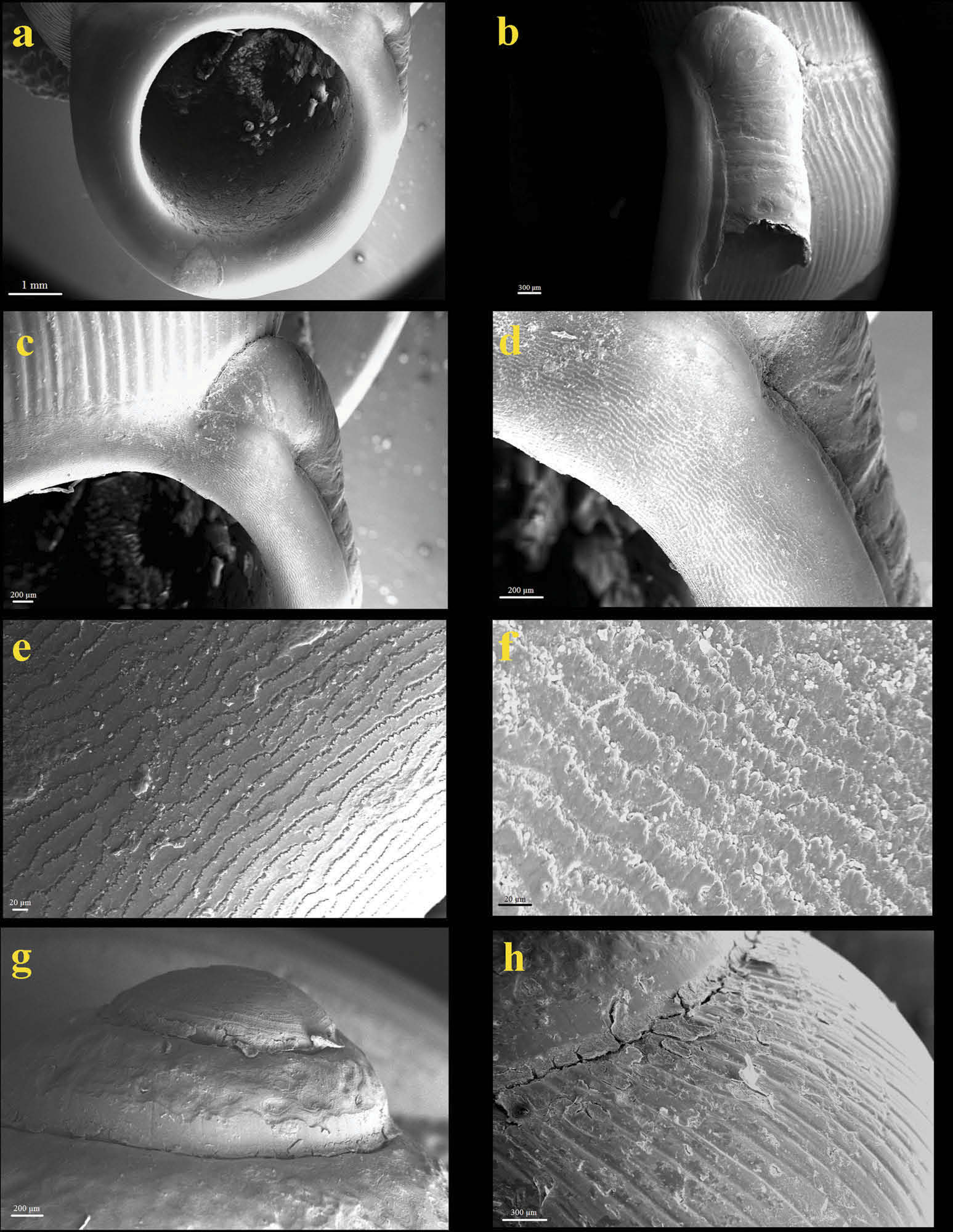