Head: Rostrum 1.7–2.0 times as long as pronotum; 1.5–1.7 times wider at apex than at base; with integument reddish to dark brown; with seven longitudinal carinae (including a pair along scrobes), distinct throughout their length; scrobes parallel to rostrum; apex covered by microsetae; areas between dorsal carinae covered by yellowish scales, scales narrow to setiform at base and setiform at the apex of rostrum, directed toward the central carina. Eyes 1.3–1.5 times as high as wide; 0.8–0.8 times more separated above than below. Head integument brown, sometimes lighter than rostrum; entirely covered by yellow scales directed to the inter-ocular fovea. Antennae with scape straight, clearly not reaching anterior eye margin; funicle: antennomere I of funicle only slightly wider than II, II longer than I and about as long as III, VI longer than wide and approximately as wide as club; club about as long as antennomeres V–VI of funicle. Left mandible straight at outer margin; with one dorsal seta; outer tooth not forming a sharp angle, with strongly acute apex; inner tooth well-developed; molar region straight. Left maxilla with stipes moderately elongate, with a long ventral seta; galeo-lacinial complex almost reaching the apex of palpomere I; palpiger with elongate vental region, dorsal region forming an abtuse angle at base; palpomere I with three apical setae longer than the length of palpomere I; palpomere II approximately as long as palpomere I. Labium with prementum slightly narrower than postmentum, about 1.5 times as wide as long, lateral margins parallel in median region, lobed in lateral-apical region, with two oblique rows of setae in dorsal region; ligula present and about as long as half the length of prementum; palps separated by about the width of palpomere I; palpomere I approximately as long as wide; palpomere II approximately as long as palpomere III; palpomere III with two lateral setae.

Thorax: Pronotum width at base 1.6–1.8 times pronotum length; base not lobed at middle; lateral margins in dorsal view convergent and regularly curved from base to apex, without apical constriction; integument brown, similar to head; entirely covered by uniformly yellowish scales; scales on the disk directed to the center or to the apex. Profemur approximately 4 times as long as wide; dorsal margin with curvature about as pronounced as ventral margin; tooth well-defined; about 2.5 times as wide as protibia. Protarsus with tarsomere I dinstinctively longer than tarsomere III; tarsomeres I and II extremely expanded laterally (especially tarsomere II); with short and dense setae on the ventral surface and sparse and long setae on the sides. Scutellum 0.7–0.8 times longer than wide; integument brown, sometimes darker than elytra; scales yellowish. Elytra 1.3–1.7 times wider than pronotum; 1.3–1.4 times longer than wide; 3.1–3.8 times longer than pronotum; humeri rounded; lateral margins distinctively wider at the middle; dorsal region with yellowish scales; epipleura without a marked inflexion on interval IX, covered by yellowish scales with the same color as disk. Ventral region of thorax integument brown, similar to dorsal region; scales pale yellow, distinctively lighter than those in pronotum. Hypomeron covered by sparse scales with apex truncated to acuminate narrower or similar to those in pronotum; scales next to coxal cavities with size similar to others. Prosternum length 1.0–1.3 times the width of coxae; postocular lobes indistinct, with apical-lateral margin of prothorax regularly curved to slightly sinuate; densely covered by mostly non-overlapping acuminate scales narrower than those in pronotum. Metepisternum covered by non-overlapping scales, or overlapping only next to the anterior margin. Metasternum without a central concavity; with very short setae in the center.

Abdomen: Ventrites III–V covered by narrow scales. Aedeagus 2–2.5 times as long as wide; about 6 times as long as high; slightly wider at opening; with an acute anterior process; ventral plate strongly sclerotized, extending to approximately 0.4 times the length of apodemes. Apodemes about 2.5 times as long as aedeagus. Endophallus with a pair of sub-spherical sclerites anterior to the basal sclerite; microtrichae of the apical region not organized in bands.

Female: Body size 5.1–6.8 mm. Rostrum 1.8–1.9 times longer than pronotum; width at apex 1.4–1.7 times width at base. Eyes 1.5–1.5 times as high as wide; 1.0–1.1 times more separated above than below. Pronotum 1.7–1.7 times as wide at base as long; lateral margins in dorsal view in general more parallel than in males and with subtle apical constriction. Prosternum length 1.1–1.2 times the coxal width; Protarsus with two most proximal tarsomeres longer than wide. Protarsus without long setae; Scutellum 1.0–1.1 times as long as wide. Elytra 1.5–1.6 times as wide as pronotum; 1.4–1.5 times as long as wide; 3.7–4.0 times as long as pronotum. Ventrites III and IV with posterior retraction not sinuate and restricted to the posterior end of the segment.

Etymology. Latipes mean “wide foot”, after the wide protarsi in males, a diagnostic character of this species.

The first specimens of A. latipes   were collected by A. Marcato from S. glaucescens   and deposited in MZSP identified as A. trapezicollis   . We collected this species from the same plant on two different field trips.

FIGURE 3. Antennae of males of species of Anchylorhynchus. Scales: 500 µm. A A. bicolor. B A. chrysomeloides. C A. variabilis D A. minimus. E A. pinocchio. F A. trapezicollis. G A. latipes. H A. rectus. I A. albidus. 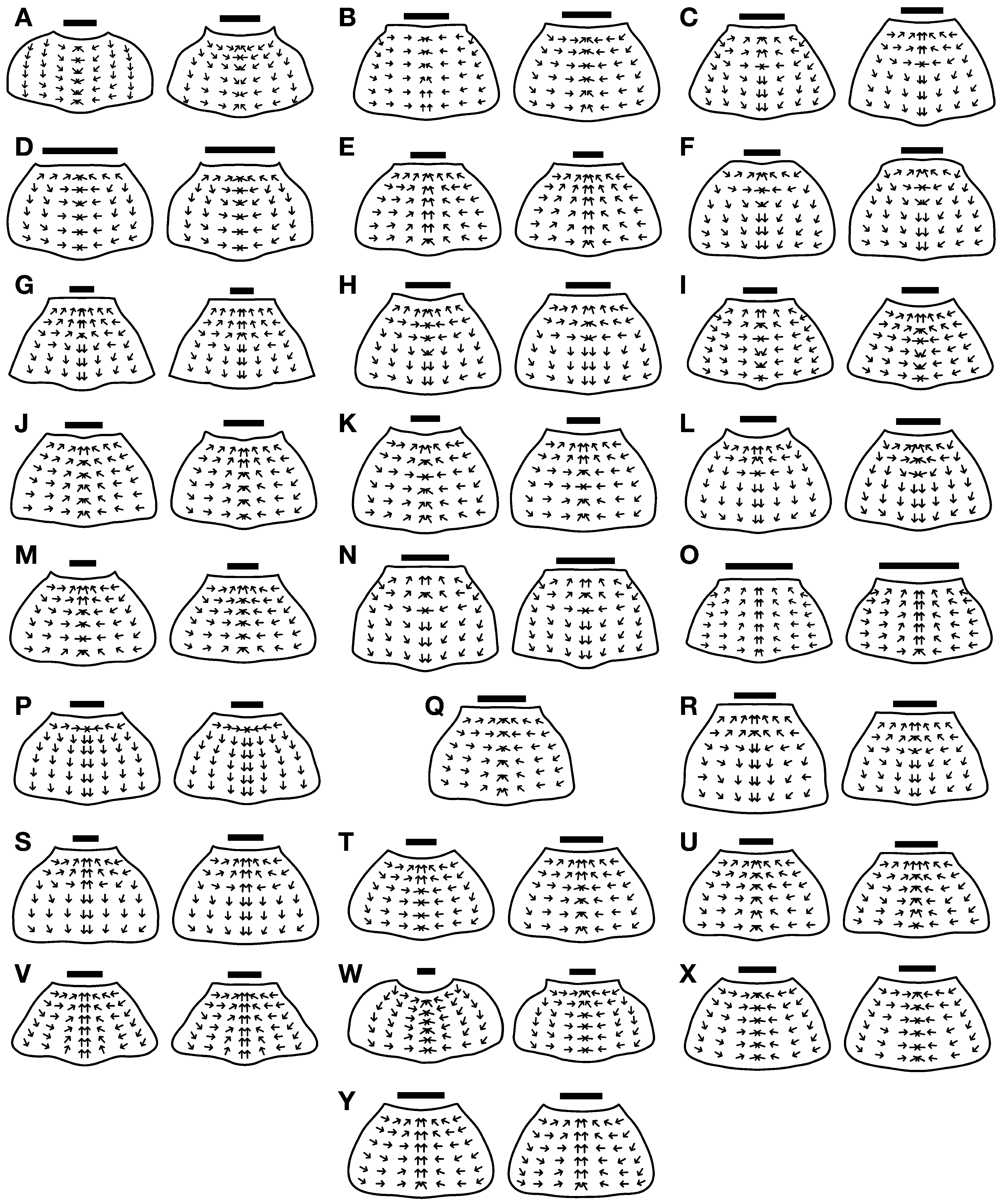 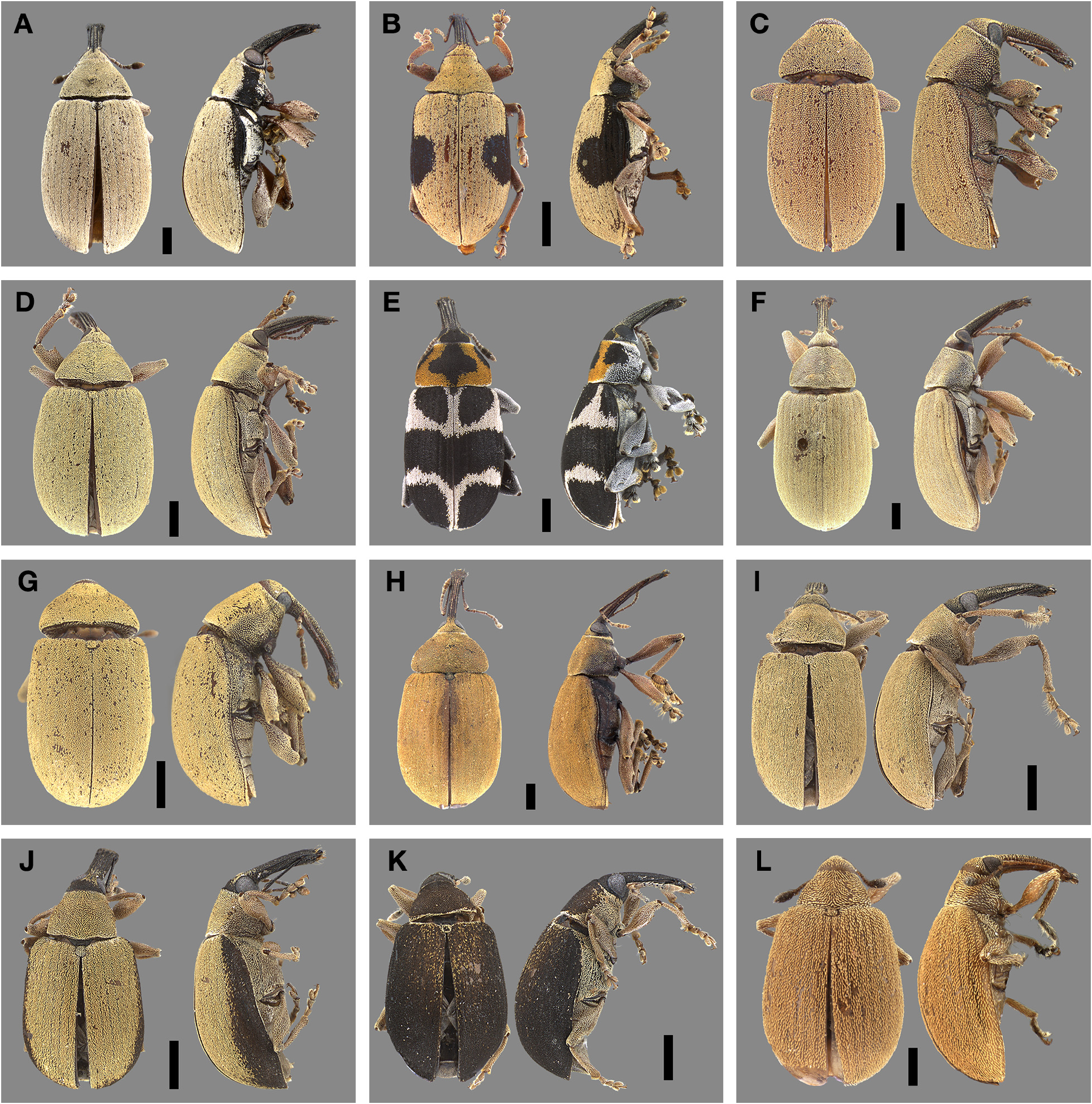 FIGURE 11. Habitus of species of Anchylorhynchus (continued). Some images are mirrored in relation to originals. Scales: 1 mm. A–B A. burmeisteri. C A. camposi. D A. centrosquamatus (from de Medeiros & Núñez-Avellaneda 2013). E A. chrysomeloides. F A. goiano. G A. imitator. H A. latipes I–K A. luteobrunneus (from de Medeiros & Núñez-Avellaneda 2013). L A. minimus. 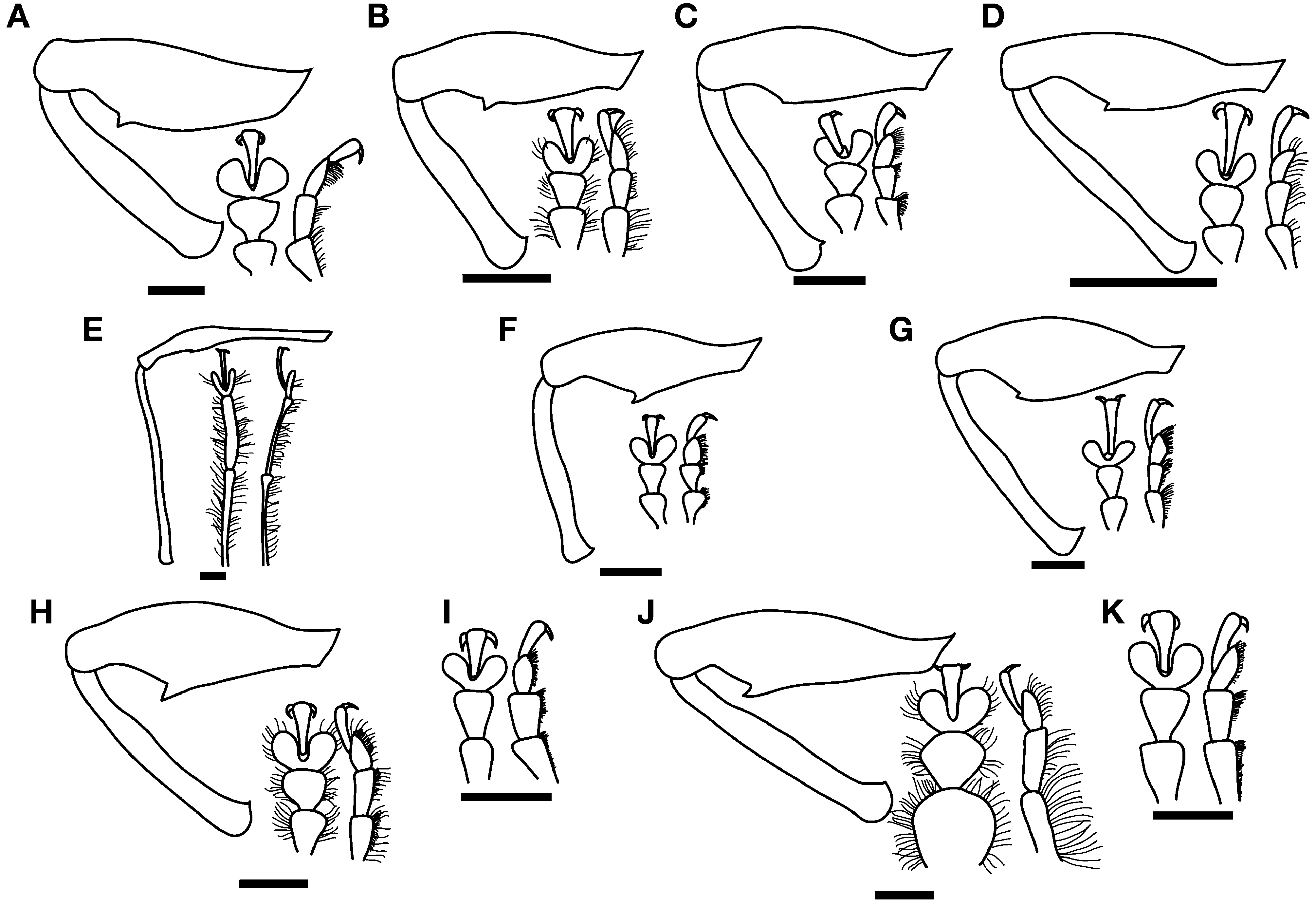 FIGURE 24. Geographical distribution of species of Anchylorhynchus based on specimens examined, excluding suspicious locations as indicated in the main text. The distribution of A. parcus is unknown. A A. aegrotus, A. albidus, A. amazonicus, A. centrosquamatus. B A. bicarinatus, A. bicolor, A. burmeisteri, A. rectus. C A. bucki, A. goiano, A. imitator, A. luteobrunneus. D A. camposi, A. minimus, A. multisquamis, A. tremolerasi. E A. latipes, A. pinocchio, A. trapezicollis, A. vittipennis. F A. chrysomeloides, A. tricarinatus, A. vanini, A. variabilis.