In light of the information unearthed thus far, it is worth briefly investigating Papilio illyris hamatus Joicey & Talbot, 1918 (now in the genus Graphium ), a species described from Suffert’s collection which has long remained a mystery. This taxon was described from a single male specimen and in the original description, the authors state the specimen originated from ‘ German East Africa (British Occupation)’. This was discussed in detail by Smith & Vane-Wright (2001) in their revision of the genus and without any further material available to them and slight differences in the wing-markings and genitalia, the name was retained as a ‘somewhat doubtful’ subspecies. Larsen (2005) postulated that ssp. hamatus was likely to be conspecific with the Central African subspecies girardeaui Guilbot & Plantrou, 1978 and that the original vague locality was patria falsa.

Similar to the holotype of Papilio pelodurus vesper (discussed previously), this specimen does not have any label data that suggests a Tanzanian origin with the only unique label (aside from the accession labels) being a handwritten ‘51’. On examining the lecotype specimen of Papilio policenes liponesco Suffert, 1904 , this specimen also has a handwritten number, this time ‘48’, in exactly the same large font and ink (although it is difficult to decipher whether these are in Suffert’s hand or not). It is most likely that these numbers refer to localities which were provided by the dealers although one can only speculate as to how Joicey, Talbot and Le Cerf were able to decipher and state so unambiguously the localities in the original descriptions. Nevertheless, the existence of Graphium illyris in Tanzania is highly unlikely, the butterfly not being found east of the Albertine Rift and based on the origins of the other illyris specimens in Suffert’s collection, the specimen may well be of a Cameroonian origin, supporting Larsen’s hypothesis.

24 The one reliable butterfly with the type locality of Lindi described by Suffert (1904b) is Pentila amenaida dama , which was collected by Friedrich Fülleborn on his expedition to the highland region between Lake Tanganyika and Lake Malawi ( Fülleborn 1906). As this expedition was funded by the Hermann and Elise Wentzel Foundation, which was set up to benefit the Royal Prussian Academy of Sciences in Berlin, the scientific samples collected on this expedition were deposited in the ZMHB and this would have been one of the specimens Suffert studied on Karsch’s request.

Graphium illyris (Hewitson, 1873) is a lowland forest species of West and Central Africa. The nominate subspecies is distributed from Sierra Leone to Ghana whilst ssp. girardeaui is found from Nigeria to D.R. Congo as far as the Albertine Rift in the east ( Ducarme 2018). The main phenotypic diagnostic characters which separate the two populations are the forewing band which is more markedly curved in the western population, and the hindwing band which terminates abruptly in cell CuA 1 in the western population but usually continues into cell CuA 2 in the central population. The yellow marking in forewing cell R 2 generally widens towards the cell in the western population whereas in the central population it remains narrow and often protrudes further towards the outer margin than the marking in R 3. In some specimens of the central population, a spot is present in the axil of forewing cell R 4 which appears never to be present in the western population (mainly due to the curvature of the band). The width of the bands and the size of the submarginal markings are highly variable but contrary to Smith & Vane-Wright (2001), specimens with some of the narrowest bands originate in Central Africa ( fig. 21 View FIGURES 19–24 ) which are somewhat reminiscent of ssp. flavisparsus (Fruhstorfer, 1903) ( figs. 23–24 View FIGURES 19–24 ). The holotype of ssp. hamatus (figs. 17–18) displays a yellow mark as a continuation of the band along the upper discocellular vein of the hindwing discal cell terminating in hindwing cell M 2. This phenotype is unique to this specimen and is unquestionably an aberration. This character aside, the specimen shares characters similar to those of the central population, namely the straighter forewing band and hindwing band continuing into CuA 2. It also has the spot in the axil of forewing cell R 4. A comparison of the left valve of three West African ( figs. 9–11 View FIGURES 9–14 ) and three Central African ( figs. 12–14 View FIGURES 9–14 ) specimens reveals the variability in the shape and serration of the dorsal and ventral harpes in both populations. However, the shape of the ventral harpe in the western population is more sub-trapezoid in shape compared to the central population which is distinctly elongate apically. The distance between the dorsal and ventral terminal processes of the valve is wider and the ventral terminal process is also more elongate in the West African population compared to the Central African population. The left valve of the holotype male specimen of ssp. hamatus ( Fig. 15 View FIGURES 15–18 ) is clearly of the Central African form and together with the phenotypic similarity of the forewing and hindwing bands, the following synonymy is established: 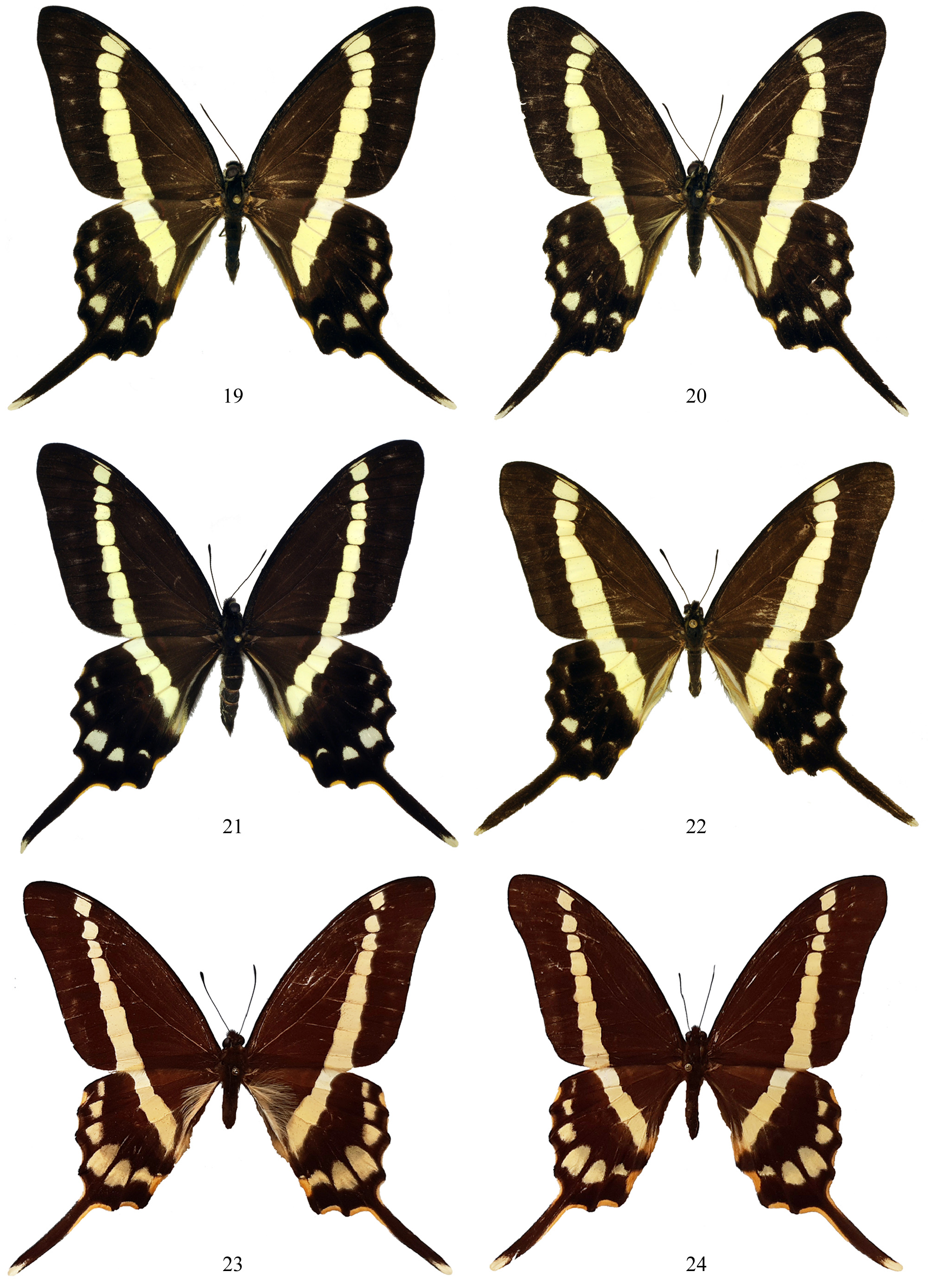 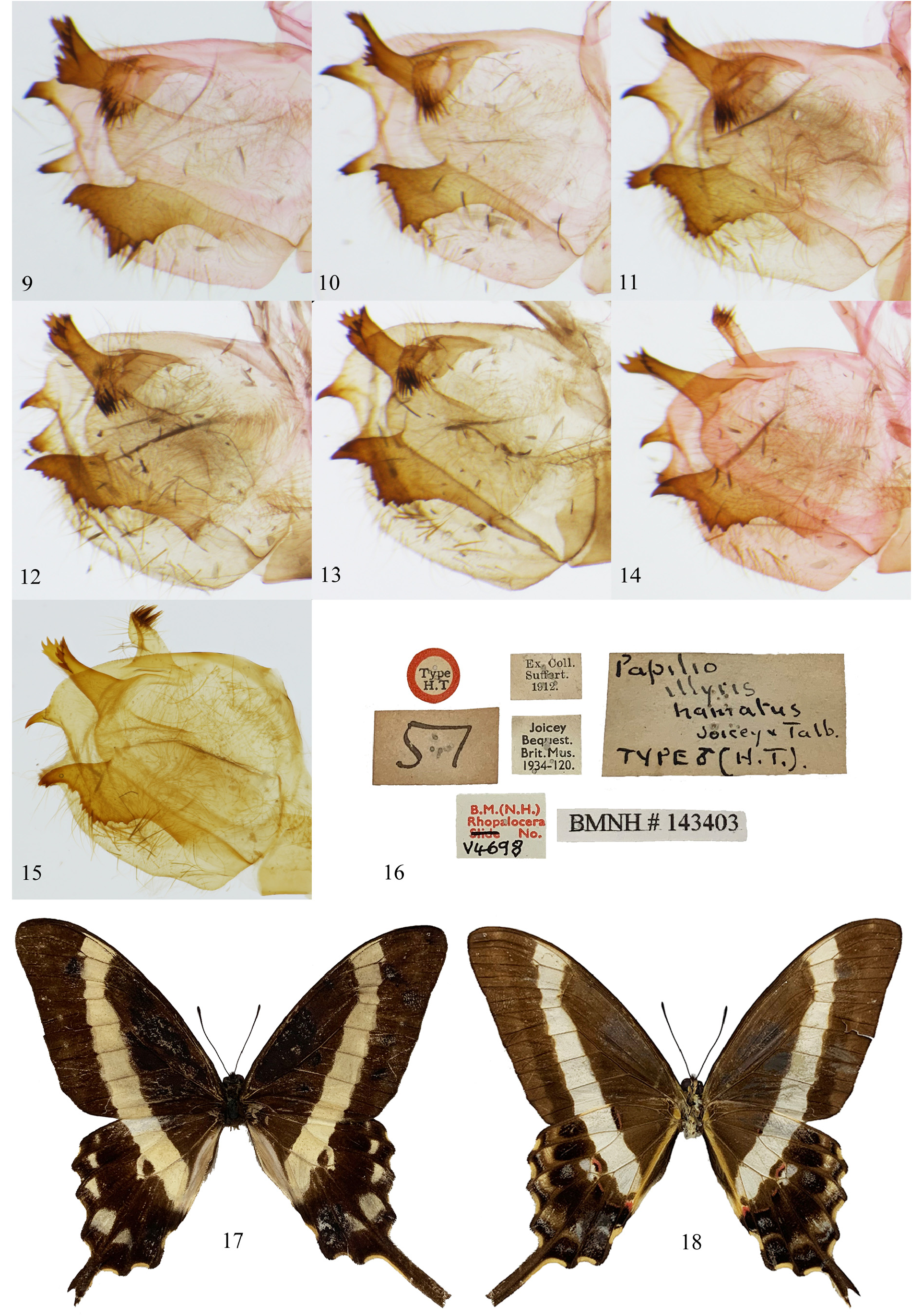