Structure. Head.- Short and broad, densely punctulate; frons with faint median carina extending from frontoclypeal suture to vertex; vague transverse sulcus between upper limits of eyes; distance between eyes 0.66 to 0.78 as wide as eye width; eye cleft to 0.60 to 0.74 its length by ocular sinus; posterior margin of eye protruding from adjacent surfaces; postocular lobe rounded; distance from base of antennae to apex of labrum 0.40 to 0.50 as long as distance from upper limits of eyes to apex of labrum; antennal segments 1 to 4 filiform, 5 to 10 eccentric, 11 acute apically; antenna extending to humerus or slightly beyond. Prothorax.- Disk campanulate; punctulate with many scattered coarser punctures; cervical sulcus moderately deep, extending from near coxal cavity to about 0.6 distance to pronotal midline; lateral prothoracic carina extending from base to 0.3 distance to coxal cavity; short median impressed line on median basal lobe; prosternum separating procoxae for about 0.60 to 0.75 their length. Mesothorax and Metathorax.- Scutellum quadrate, ground color obscured by dense white pubescence, apex bifurcate; elytron about twice as long as broad; striae deep, punctate; strial intervals punctulate; striae 2 and 3 closer to one another at base than to adjacent striae, others subequal at base; striae 2 and 3 and with small denticles at their bases; humerus glabrous, shiny dark brown. Legs.- Undersurfaces and all of hind coxa punctate; hind femur constricted apically and basally. expanded medially to slightly more than width of coxa; inner ventral surface with a glabrous, brown longitudinal carina; femur armed with a subapical acuminate spine about as long as width of tibial base and 3 spinules, about 0.60 length of spine; tibia with ventral, lateroventral, lateral and dorsomesal glabrous longitudinal carinae; ventral carinae separated by a shallow sulcus; dorsal surface of tibia without fossa; tibial corona with 4 small spinules; mucro reaching to one-sixth as long as first tarsomere; not sinuate at base of mucro; first tarsomere with ventral, lateral, and mesal glabrous longitudinal carinae. Abdomen.- First sternum with median oval depression, clothed with dense white pubescence; sternum not arched to posterior, about as long as remaining sterna; sterna 2 to 4 unmodified, 5 emarginate; pygidium microrugose, convex in lateral view.

Etymology. This species is named to honor

Camerino Romero Beristain, uncle of JRN, who is

the last of the Romero-Beristain dynasty.

at FSCA, remainder of paratypes in CNIN (2),

the mexicanus species-group, together with nine-

Johnson, A. macrophthalmus (Schaeffer)   , A.

sennicola Johnson, A. speciosus (Schaeffer)   , A.

striae 3 and 4 abbreviated, and vertex of head has Figure 4. Acanthoscelides camerinoi   genitalia. A) Median a globose area. Most have a truncate apex of the lobe. B) Lateral lobes.

ventral valve and similar armature of the inter-

nal sac of male genitalia. All of the host plants are mimosoid legumes except for A. obrienorum   , which feeds in seeds of the genus Senna Mill.   (Caesalpinioideae). The closest relative of A. camerinoi   is A. obrienorum   , and they share a similar external morphology, including the first sternum of male with median oval depression that is clothed with dense white pubescence. Acanthoscelides camerinoi   is the second species known to feed on plants in the genus Senna   . The latter two species can be separated easily by the difference in sclerites of the internal sac.

Among the Acanthoscelides species   keyed in Johnson (1983) A. camerinoi   should be separated by the following modifications in the key: 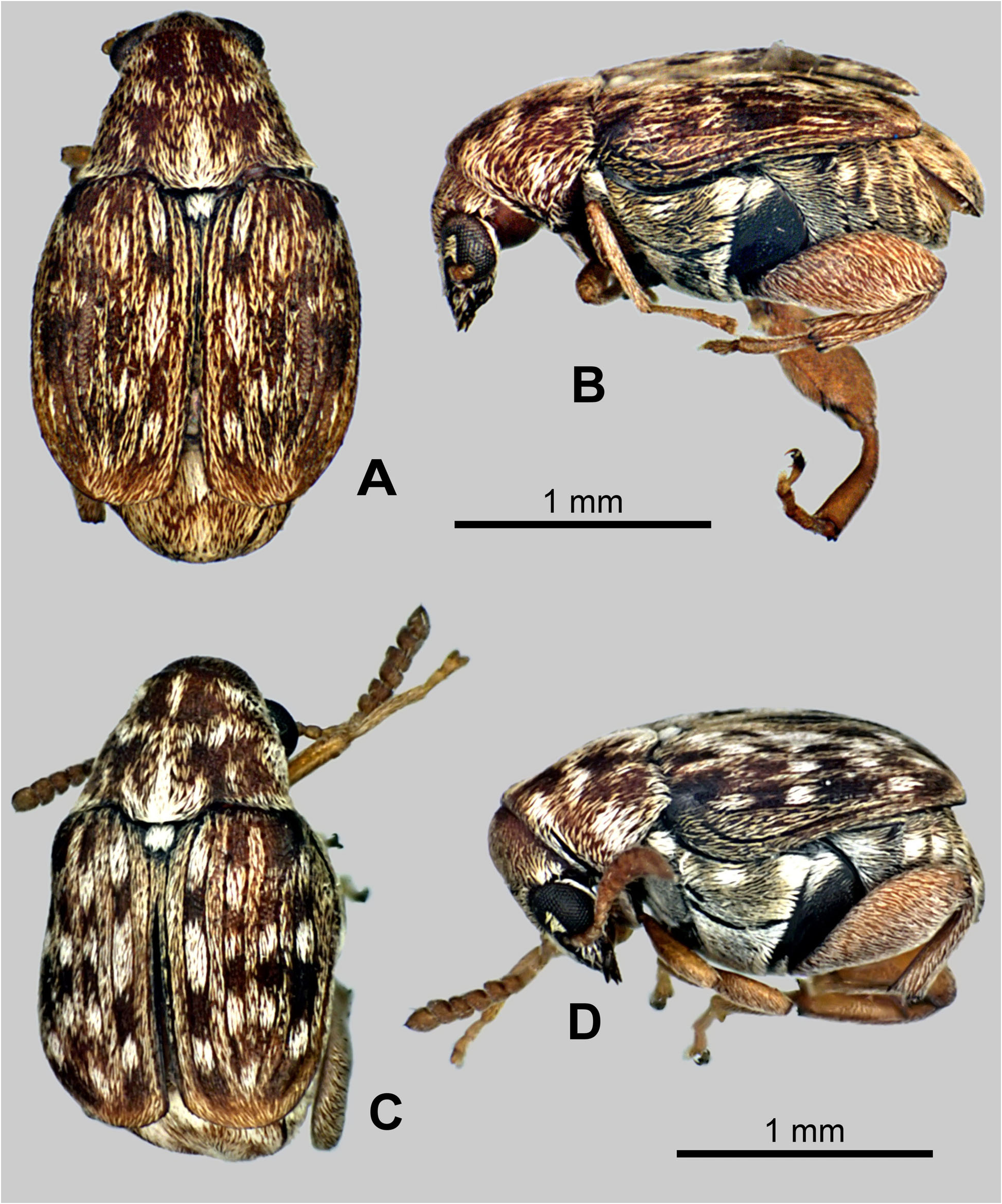