Apart from isolated scales, sarcopterygian remains are rare in the Ly Hoa fauna, but two new specimens are worth describing. Specimen BT 207n shows the internal impression of a large dermal plate ( Fig. 13 View FIG ), whose margins still retain a very small strand of cosmine-covered bone. Owing to the lack of landmarks, such as the sensory-line canals or large sensory pores, the identity of this plate is quite difficult to determine. Considering its size and overall shape, it could be either an opercular, or a “cheek plate” (composed by the fused squamosal, quadratojugal and preopercular in certain basal dipnomorph and tetrapodomorph sarcopterygians, such as the Youngolepididae   and Kenichthys   ). In the latter case, its outline would best agree with the cheek plate of Kenichthys   ( Chang & Zhu 1993: fig. 7F) and differs notably from those of Youngolepis   described to date, whatever their wide range of individual variation (Tong-Dzuy & Janvier 1990: fig. 32; Chang 1991: pl. 2A, B; Zhu & Fan 1995: fig. 2A). However, it shows no evidence of anterior overlap areas for the postorbital, jugal and maxillary, and its internal surface is only hollowed by a small socket (s, Fig. 13B View FIG ), in which an adjacent bone may have been inserted. In addition, its margin shows no evidence of openings for the jugal canal and the characteristic three sensory pits, and its internal impression shows no internal mark of this canal (which usually forms a slight ridge on the internal surface of the bone). Assuming that it is an opercular, its shape is quite different from that of the opercular of both Kenichthys   and Youngolepis   (Tong-Dzuy & Janvier 1990: fig. 31A; Chang & Zhu 1993: fig. 13A). Only an isolated bone, presumably from the opercular series of Youngolepis   and figured by Tong-Dzuy & Janvier (1990: pl. 7:7), bears some resemblance to this specimen.

The second sarcopterygian specimen is an isolated jaw bone ( Fig. 14 View FIG ), interpreted here as either a dermopalatine or an ectopterygoid. It shows a large tusk insertion pit and one poorly preserved tusk (pt, t, Fig. 14B View FIG ). The latter is sectioned near its base and displays a polyplocodont structure (pld, Fig. 14B View FIG ). The lateral margin of this bone is covered with fields of denticles (dtc, Fig. 14B View FIG ), as in the dermopalatine, ectopterygoid and coronoids of Youngolepis ( Chang 1991)   . In addition, many cosmine-covered scales occur in the Ly Hoa Formation. As a whole, they agree with those of Youngolepis   , and generally show series of relatively large cosmine pores and dentine ridges in the anterior part of their external surface ( Fig. 15 View FIG ). 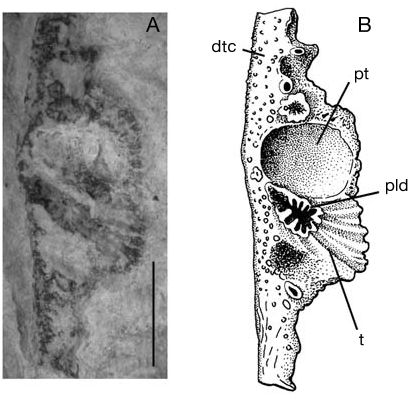 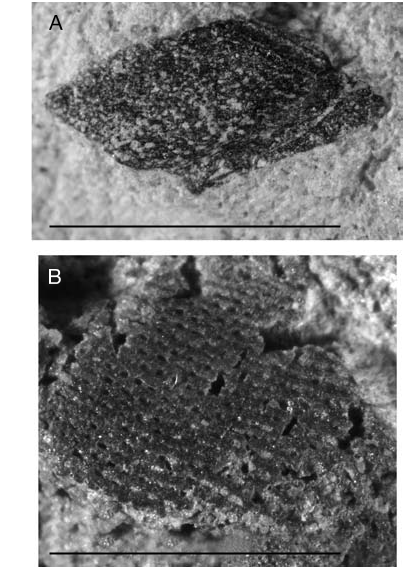