A few plate fragments also suggest the presence of a second arthrodire, and presumably yet another brachythoracid in the Ly Hoa fauna. In particular, a portion of a relatively large, gently curved plate, ornamented with rounded tubercles and bearing a large overlap area (oa, Fig. 11 View FIG ), belongs to an arthrodire, which is certainly different from Lyhoalepis   because all the thoracic plates and probably the skull-roof plates of the latter are fused and show no overlap surfaces (Tong-Dzuy et al. 1994). The shape of the overlap area and the curvature of this plate is somewhat suggestive of the dorsal part of the PDL plate of such a brachythoracid as Coccosteus   ( Miles & Westoll 1968: fig. 32). 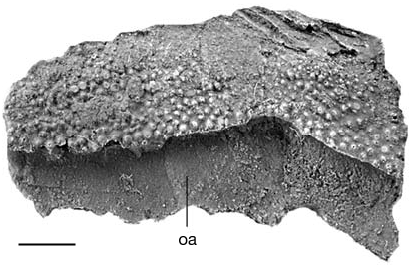