Antiarch remains are amongst the most abundant vertebrate remains in the Ly Hoa Formation, along with the youngolepidid sarcopterygian scales. To date, apart from the large plate fragments from locality 5 ( Fig. 1C View FIG ), there is no evidence for antiarchs other than Vukhuclepis lyhoaensis   , which is quite distinctive due to its finely tuberculated ornamentation and very small size. It is not ruled out, however, that several species of this genus may occur in this fauna, yet currently available material does not indicate specific diversity. The material of V. lyhoaensis   described by Janvier et al. (1997: figs 4A-D; 5-7) essentially consisted of plates of the thoracic armour, a poorly preserved paranuchal plate, and a presumed pectoral appendage. New collections add further information about the structure of the thoracic armour and allow the description of two plates of the head armour, namely the nuchal and paranuchal plates.

A poorly preserved plate, showing only the basal bone lamella, is interpreted here as a possible PNu plate ( Figs 3B View FIG ; 4B View FIG ). It is roughly trapezoidal, with at least two distinct overlap areas for the Nu and lateral (L) plates, respectively (oaNu, oaL, Fig. 4B View FIG ). As far as as can be seen, its overall shape would agree with that of the PNu plate of Yunnanolepis   .

A very small and poorly preserved AMD plate ( Fig. 3C View FIG ) shows much the same proportions as the larger specimen figured by Janvier et al. (1997: fig. 4B), with traces of the radiating ridges and tubercles of the dorsal surface. It confirms that the two overlap areas for the anterior dorsolateral plates did not meet anteriorly, as suggested by Janvier et al. (1997: fig. 6C) on the basis of another, incomplete AMD plate.

The AVL plate is known from several incomplete specimens, including the holotype ( Janvier et al. 1997: fig. 4A). One of the characters mentioned in the diagnosis of Vukhuclepis lyhoaensis   by Janvier et al. (1997) is the very short and almost square-shaped AVL plate. However, the lack of overlap areas for the median ventral (MV) plate now suggests that this specimen may not be complete and that part of its posterior margin was broken off.Yet the missing part of the plate may not be large, as there is a small remnant of the ventrolateral recess, which straddles the AVL-PVL suture ( Janvier et al. 1997). In the new material collected in 1997, two AVL plates were found in association with an ADL plate and probably belong to the same, crushed thoracic armour ( Fig. 5A, C View FIG ). The outline of the AVL plate can be reconstructed by combining the part and counterparts of the plates of either sides ( Fig. 6A View FIG 2 View FIG ) and looks quite different from that of the holotype, with a very distinct, oblique, posteromedial overlap area for the MV plate (oaMV, Fig. 6A View FIG 2 View FIG ). In this respect, it is thus quite similar to the AVL plate of all other antiarchs. In all AVL plates of Vukhuclepis   , the brachial recess (bra, Fig. 6A View FIG 3 View FIG , A 4 View FIG ) is very small and limited anterolaterally by a short prepectoral corner (ppc, Fig. 6A View FIG 1 View FIG , A 2 View FIG ). In one of these plates, the ornamentation of the prepectoral corner and the area around the brachial recess is made up by much larger tubercles than on the remaining surface of the plate, and this area seems to be delimited by a row of tubercles, which suggest either a suture or a sensory-line groove (?sut, Fig. 6A View FIG 1 View FIG ). The trace of a suture between the spinal plate and the AVL plate occurs in Yunnanolepis porifera Zhu, 1996   ( Zhu 1996: fig. 7H, K), and a sensory-line groove is present in this area, yet closer to the brachial recess, in Chuchinolepis dongmoensis Tong-Dzuy & Janvier, 1990   (Tong-Dzuy & Janvier 1990: fig. 21A). The anterior internal transverse crest is visible in one of the new specimens and appears similar in structure to that of the holotype. In fact, it is double and consists of one short and massive posterior crest (itca2, Fig. 6A View FIG 2 View FIG ), and one, long and slender anterior crest (itca1, Fig. 6A View FIG 2 View FIG ), separated by a shallow groove. The anterior surface of the anterior crest, which forms the postbranchial lamina proper, is ornamented with three or four transverse, parallel ridges (rid, Fig. 6A View FIG 2 View FIG ), as in some other non-euantiarchan antiarchs (e.g., Chuchinolepis   ; Tong-Dzuy & Janvier 1990: fig. 21B; Zhu 1996: figs 22, 23). The lateral lamina of the AVL plates displays at least two oblique ridges, which converge toward the brachial recess ( Figs 5B View FIG ; 6B View FIG ) and, internally, a broad overlap area of the posterolateral plate (oaPL, Fig. 6B View FIG ). No detail could be observed inside the brachial recess (bra, Fig. 6A View FIG 3 View FIG , A 4 View FIG ), except for a small, longitudinal, lateral ridge (cbr, Fig. 6A View FIG 4 View FIG ), possibly made up by perichondral bone, and which is visible thanks to the broken extremity of the prepectoral corner.

A small anterior portion of ADL plate is associated with the two AVL plates mentioned above (ADL,

Fig. 5A View FIG 2 View FIG ). Ventrally to its articular area, its anterior margin is developed into a massive knob, ornamented with large outgrowths. Further ventrally, a large, vertical groove extends along the anterior margin of the plate (grc, Fig. 6C View FIG ). This groove occupies the position of the small recess referred to by Zhu (1996) as the “cavity for the Chang’s organ”, shared by Yunnanolepis   and Phymolepis   . However, Young & Zhang (1996: fig. 5B) showed that, at any rate in Phymolepis   , this recess houses a very small, vestigial, anterolateral (AL) plate, possibly subdivided into two elements, and it was probably the same in Vukhuclepis   .

In close association with the posterior median dorsal plate described below (PMD, Fig. 7 View FIG ) is an isolated PDL plate (PDL, Fig. 7 View FIG ). Both plates presumably belong to the same individual. The PDL plate is incomplete but shows most of its lateral lamina and patches of its dorsal lamina, which seems to have been relatively broad. The main lateral-line groove is broad and runs close to the dorsolateral ridge (mll, Fig. 8A View FIG 2 View FIG ). The posterior part of the dorsal lamina is marked by a broad, posteromedially directed ridge (pdr, Fig. 8A View FIG 2 View FIG ), which corresponds, on the internal surface, to the position of the thick internal posterior transverse crest (itcp, Fig. 8A View FIG 1 View FIG ). This broad ridge probably met, medially, a short transverse elevation of the PMD plate (pdr, Fig. 8B View FIG 2 View FIG ), that branched off posterolaterally from the anterior median dorsal process of this plate (pda, Fig. 8B View FIG 2 View FIG ). The main lateral-line groove on the lateral lamina sends off a small dorsomedial branch that continues on the dorsal lamina along the anterior limit of this broad ridge (dslg, Fig. 8A View FIG 2 View FIG ). The two patches that remain of the anteromedial part of the dorsal lamina also show a slight elevation and seem to correspond to two other, anteromedially directed ridges ( Fig. 8A View FIG 2 View FIG ), which were prolonged on the AMD plate, where similar ridges also occur ( Fig. 9 View FIG ; Janvier et al. 1997: fig. 4B1). Such large dorsal ridges, mostly radiating from the centre of the AMD plate, but also from the anterodorsal corner of the ADL plate and the posterodorsal corner of the PDL plate, are a widespread character among early antiarchs. However they are best marked in the closely related genera Phymolepis   and Mizia   (Zhang 1978: pl. 6; Zhu 1996: pls 1, 2, figs 10, 11). In most of the trunkarmour plates of Vukhuclepis   , the bone extending beween these ridges is extremely thin, and almost unornamented externally, whereas the radiating ridges are thick and bear conspicuous tubercles. This, again, recalls Mizia longhuaensis Zhu, 1996   ( Zhu 1996: fig. 10A, C, pl. 2:8, 10) from the Early Devonian (probably Pragian) Xujiachong Formation of Yunnan. Along the ventral margin of the lateral lamina of this PDL plate lies a narrow strand of dermal bone, ornamented with tubercles, and which is most probably a remnant of a slightly displaced PL plate (PL, Figs 7B View FIG ; 8A View FIG 2 View FIG ).

A reconstruction of the thoracic armour of Vukhuclepis   is attempted ( Fig. 9 View FIG ), on the basis of various, isolated and associated plates described here and by Janvier et al. (1997). When the PMD and PDL plates described above, which are likely to belong to the same individual, are assembled so that their respective posterior limits are aligned, the massive, posterior internal transverse crest of the PDL plate is oriented in such a way that it most probably passed anteriorly to the posterior ventral median process of the PMD plate (prmvp, Fig. 8B View FIG 1 View FIG ). At any rate, the part of the PMD plate that extends laterally to this process does not show any thickening that would indicate the presence of the medial part of the posterior internal transverse crest. This character is unique to the Yunnanolepididae sensu Zhu (1996)   ; that is, the clade including Yunnanolepis   , Mizia   and Phymolepis   . Vukhuclepis   is thus probably to be included in this clade. Although it is still incompletely known, in particular as to its skull roof, its overall morphology may have been quite similar to that of, e.g., Yunnanolepis porifera Zhu, 1996   ( Zhu 1996: fig. 4). 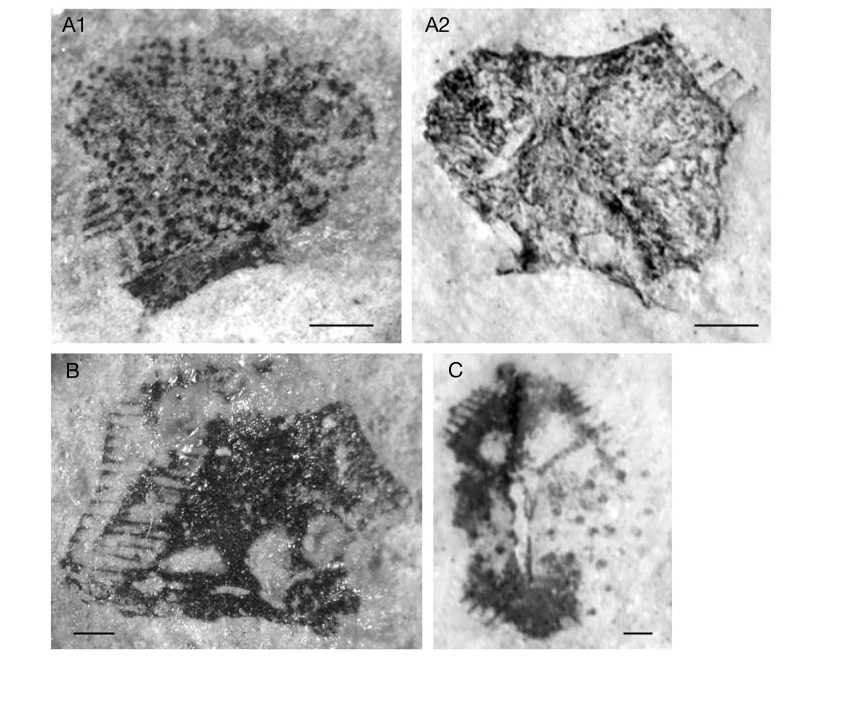 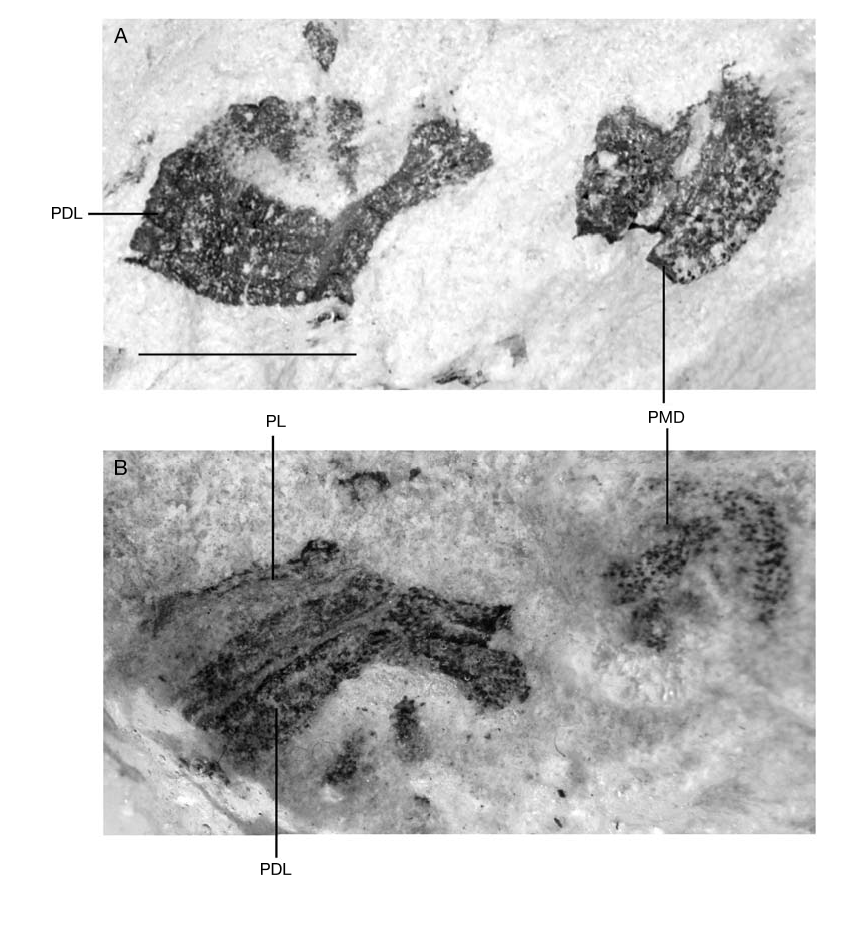 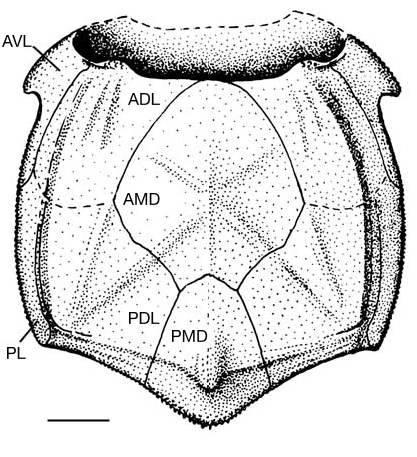