Geographic Distribution: This species is recorded from deep water in the Bay of Plenty and the Tasman Basin.

Arms slightly higher than wide at base, gently tapering distally. Dorsal armplates in contact throughout remaining arms; at base, between radial shields are 2–3 small rectangular plates, usually with spinelets of inner arm comb apparent; next 3–4 plates are wider than long, more or less subrectangular; more distal plates are longer than wide, with straight proximal and lateral margins, distal margin slightly rounded and the widest part of plate. Lateral armplates with 2 very slender, delicate armspines, up to about 1 / 2 length of arm segment; upper spine placed about midway up side of arm, lower close to tentaclepore. First 2 ventral armplates just in contact, remainder separated; first is a broad plate, with a very slight median point on distal margin; second is slightly longer than wide, pointed proximally and subtriangular; the plates then become wider than long with small median points on proximal and distal margins, that on distal margin usually slightly thickened. Tentacle­pores relatively large with numerous tentacle scales; proximal pores with 5–6 scales on proximal margin, outer scale spiniform, slightly spaced from lower armspine, others are small, flat and squarish; distal margin has 4–5 squarish papillae. On distal pores there are 3–4 scales on the proximal margin only, the inner bluntly pointed, the outer spiniform; tentacle­scales are easily dislodged.

Remarks: Some specimens have a few very scattered dorsal disc spines; that from Stn U 552 has oral shields rounded proximally. Specimens from Stns P 969 and P 970 had ripe gonads.

The most closely related species are O. aequalis   , O. ljungmani   , O. sarsi   , O. leptoctenia   and O. bathybia   . Both O. aequalis   and O. ljungmani   have some larger plates or scales on the dorsal surface of the disc, the former also with 4–6 armspines, the latter with a convex distal margin to the dorsal armplates, and 3 armspines, the uppermost longest, equal to an arm segment.

Of the other species, all have 3 armspines; in addition, O. sarsi   has short, almost contiguous radial shields, while O. leptoctenia   has a slight angle to the distal margin of the dorsal armplates; both species have the oral shield longer than wide. The closest relative appears to be O. bathybia   , differing in the distal margin of both dorsal and ventral armplates. One feature of O. spinicantha   , not reported for any of the above species, is the supplementary lateral armplate that carries the secondary armcomb; although not mentioned in the other species, it may well have been overlooked. Features of these species are listed below. 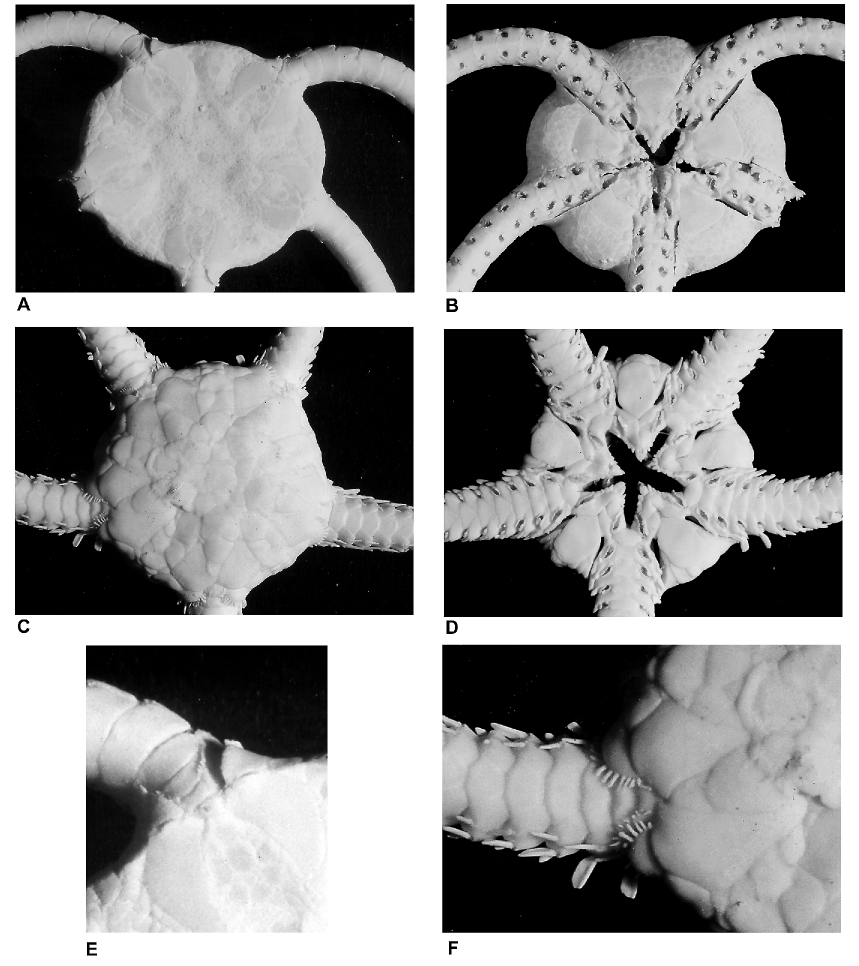