Diagnosis. “Corallum monopodial and densely pinnulated mostly to the third and fourth order. Subpinnules forming a complex mass of anastomosing ramifications on both the anterior and posterior side of corallum. Primary pinnules arranged in three rows and loose verticils of three, consisting of two laterals and one anterior pinnule. Secondary pinnules in verticils of three, in pairs, or occurring singly. Highest order subpinnules predominantly in pairs or singly. Primary pinnules not easily discernable due to the dense subpinnulation. Cylindrical reticulated worm run extending along the posterior side of the stem. Spines small, conical, with rounded apex, and slightly inclined distally; mostly 0.03–0.04 mm tall (up to 0.06 mm); arranged in four to five longitudinal rows (in lateral view) with members of each row spaced 0.1–0.2 mm apart. Polyps 1–1.3 mm in transverse diameter; and arranged in a single series mostly on one side of the pinnules” ( Opresko, 2006).

Description of Brazilian specimen. Corallum (MOUFPE—CNI 113) monopodial and highly pinnulated, with a total length of 19.5 cm, and with a “worm run” with a polychaete present in the tube ( Fig. 31 View FIGURE 31 a–b). Subpinnulation occurring throughout the primary pinnules. Primary pinnules arranged in three rows not easily distinguishable because of dense corallum pinnulation. Primary pinnules with a length between 10 and 20 mm. Number of secondary pinnules per posterior primary of approximately 11; Corallum pinnulated to the fourth order. Secondary pinnules slightly more abundant on the abpolypar side of the posterior primary pinnule, with denser pinnulation pattern at the proximal end of the primary pinnules. Spines small, arranged in approximately 5 rows in lateral view ( Fig. 31 View FIGURE 31 c–d), with a size between 0.024 mm and 0.06 mm; distance between spines in the same row approximately 0.28 mm. Polyps not visualized (lost tissue).

Remarks. The material studied here is very similar to the holotype described by Opresko (2006). Slightly larger, the specimen collected in Brazil presents a total colony length of approximately 20 cm, whereas the holotype measures approximately 17 cm. The pinnulation pattern follows that described for the holotype. The spines, however, are more spaced out, 0.28 mm apart in the same row, whereas in the holotype they are 0.1–0.2 mm apart in a row. Stylopathes adinocrada   differs from S. columnaris   mainly due to the less dense pinnulation pattern in the latter. In S. columnaris   , subpinnules occur mainly in the distal portion of the primary pinnule, rarely covering the worm run, as occurs in S. adinocrada ( Opresko, 2006)   . The worm run of MOUFPE—CNI 113 contained a specimen of the Benhamipolynoe antipaticola (Benham, 1927)   . This polychaete has already been recorded in association with other species of the genus Stylopathes   , such as Stylopathes tenuispina (Siberfield, 1909)   and Stylopathes columnaris ( Duchassaing, 1870)   ( Pettibone et al., 1970; Britayev et al., 2014). This is the first record of B. antipaticola   in association with S. adinocrada   . 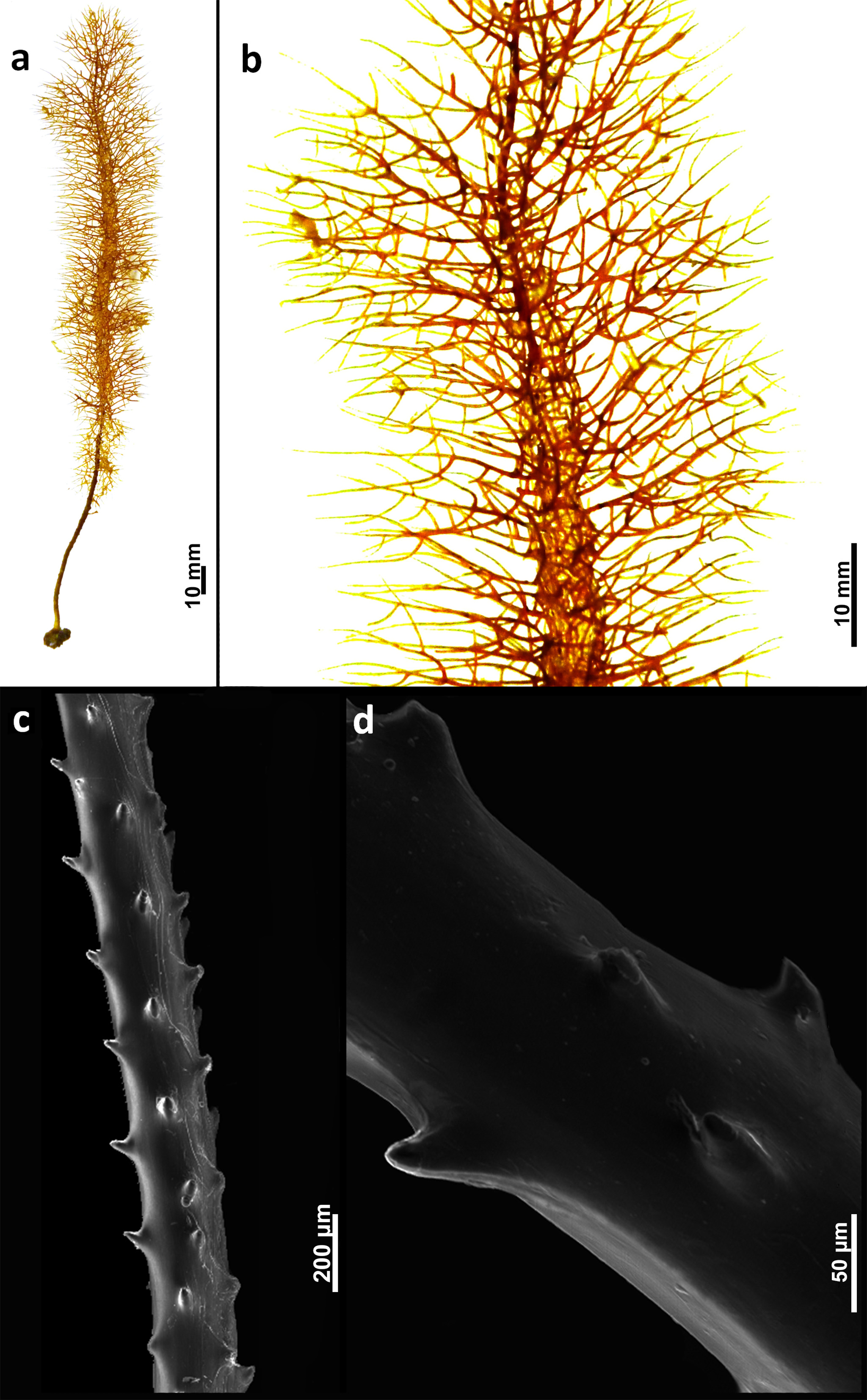