Diagnosis. Corallum sparsely branched, but densely pinnulate. Larger branches arising mostly from near the base and subvertical in orientation. Primary pinnules arranged primarily, but not exclusively, in three axial rows, two lateral and one posterior. Lateral primary pinnules more complexly subpinnulate than posterior primary pinnules. Pinnules and subpinnules (six or more orders) also grouped together in clusters (pseudo-verticils) containing one pinnule from each row. Pinnules and subpinnules adhering. Spines simple, conical, smooth, with acute to rounded apex; usually 0.06–0.08 mm from center of base to apex. Spines on pinnules and subpinnules arranged in axial rows; up to 6–7 rows in lateral view. Spines 0.16–0.30 mm apart in each row, with 5–6 spines per millimeter, on average. Polyps not more than 1.2 mm in transverse diameter from proximal side of proximal lateral tentacles to distal side of distal lateral tentacles. Polyps arranged uniserially on upper or anterolateral sides of pinnules and subpinnules; with 7–8 polyps per centimeter ( Opresko, 1999, 2006).

Description of Brazilian specimen. Fragment (MNRJ 8646) damaged, branched up to the 4th or 5th order, and pinnulated ( Fig. 33a View FIGURE 33 ). Stem thickness of 1.9 mm. Irregular pattern of branching and pinnulation. Pinnules arising single, in pairs or in verticils of 3 to 4 pinnules, inclined towards the distal end of the branch ( Fig. 33b View FIGURE 33 ). Secondary pinnules present, following the pattern of the primary pinnules. Length of primary pinnules varying between 5 and 21 mm (larger ones supporting secondary pinnules), but usually between 10 and 15 mm. Basal diameter of primary pinnules close to 0.25 mm. Length of secondary pinnules between 2 and 10 mm. Basal diameter of secondary pinnules mainly between 0.09 and 0.15 mm. Distance between secondary pinnules in the same row 1.8–3.5 mm. Spines conical, smooth, with rounded apex, inclined towards the distal end of the pinnules ( Fig. 33 View FIGURE 33 c–d). Height of spines between 0.045 and 0.100 mm, most common being approximately 0.07 mm. Width of base of spines 0.06 to 0.09 mm. Distance between spines in the same row 0.1–0.4 mm, with five to six spines per millimeter. Polyps not visualized (lost tissue).

Remarks. The analyzed specimen (MNRJ 8646) differs from the type of T. triadocrada   in having a more spreadout, somewhat flabellate branching pattern and being much less regularly pinnulate. In the type, the pinnules most frequently occur in subverticils of three with the two lateral pinnules being more extensively subpinnulated than the single posterior primary pinnule. In comparison, in MNRJ 8646 the pinnules frequently occur singly, in pairs, and in groups of four, as well as in the groups of three. Where they do occur in groups of three, the lateral pinnules are not more extensively subpinnulated. Furthermore, the occurrence of subverticils of four pinnules appears to be much more common than in the type. In other skeletal features, such as the shape, size and spacing of the spines and the size and basal diameter of the pinnules, MNRJ 8646 is similar to the type.

The genus, until now, was known only from the coast of Tasmania and Australia (type locality of T. triadocrada   ) with two records of Triadopathes   sp. from the New Zealand Coast in the National Museum of Natural History, Smithsonian Institution (USNM) (available in <http://collections.nmnh.si.edu/search/iz/>), this being the first record of the genus for the Atlantic Ocean. 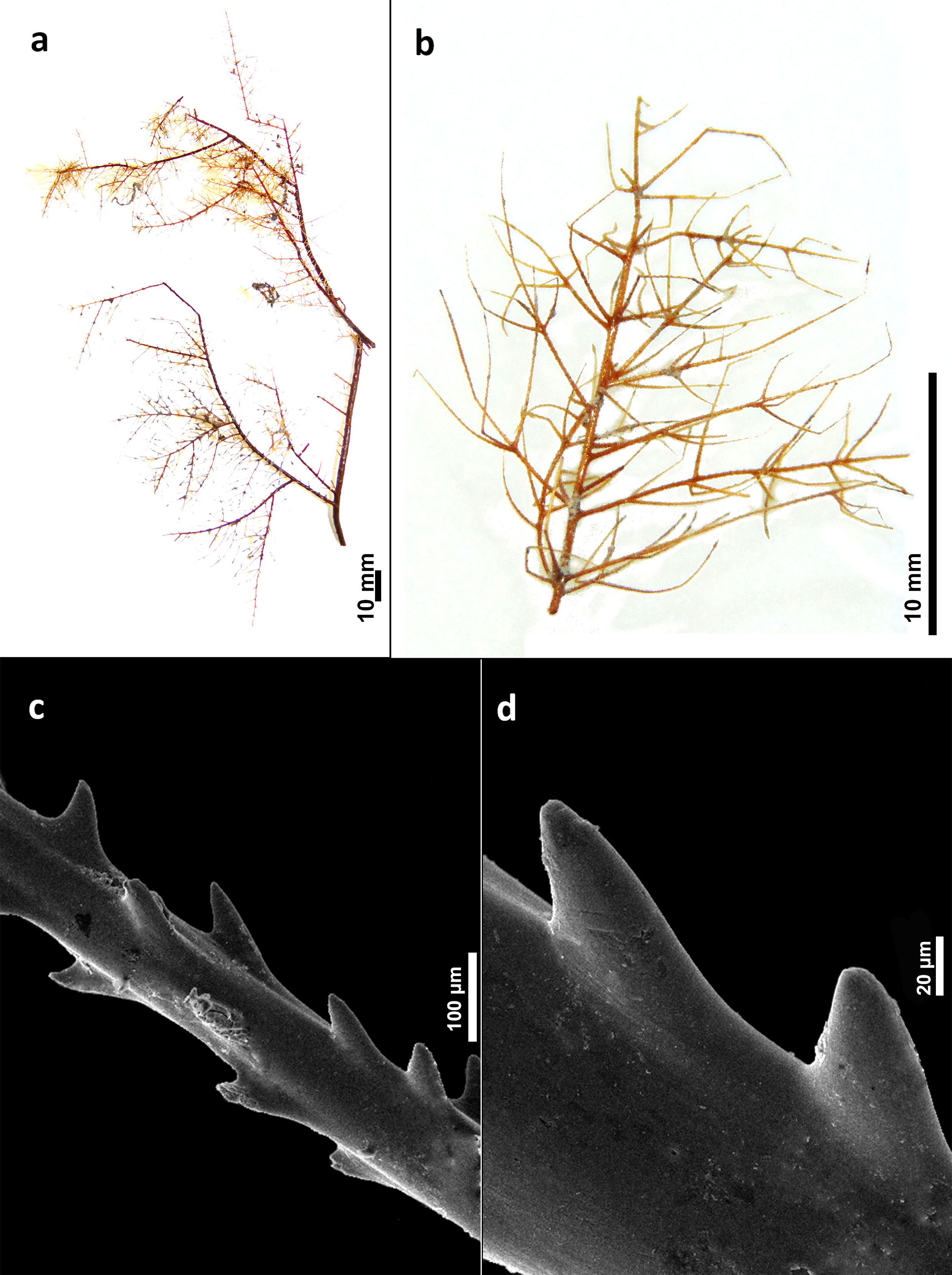