Disc diameter 26 and 29 mm, both with up to 13 arm spines, 9–10 oral papillae. Radial shields concealed by granules, but in parts of the disc, the granules have been rubbed off ( Fig. 4E, GView Fig). Proximal dorsal arm plates entire. In the largest syntype, colour faded light brown dorsally, cream with some dark brown ventrally, arms with faint dark bands. There are irregular dark rings on the pale brown dorsal disc of the smallest syntype examined ( Fig. 4GView Fig). In these specimens, there are dark brown and white spots along the distal edge of the dorsal arm plates. Among the paralectotypes examined only from photographs, one is dark brown on dorsal disc and arms, and the dark colour extends onto the ventral disc, fading towards the oral frame. The other specimens have a faded brown dorsal colour and light ventral discs and arms. Some of these show faint spots on distal edges of the dorsal arm plates.

The amplification of nuclear markers from the syntypes was not successful, most likely due to the long storage time and unknown initial preservation method of the specimens, which might have caused the DNA to deteriorate.

Variation in other Senegalese specimens

Size range 8–13 mm dd. The specimens vary in colour pattern. One specimen has large white patches over the area around the radial shields, on an otherwise dark disc. Some animals have a light brown disc with minute, irregular white spots with black borders (SMNH-95511#2, Fig. 5View Fig E–F) or a greyish green disc with black rings (SMNH-95511#3, Fig. 5View Fig G–I). Dorsal arms banded light and dark, distal edge of dorsal arm plates with small dark and white spots. The ventral disc is always much lighter than the dorsal disc, often cream with a hint of darker colour, sometimes green. The oral shields are completely creamy white in some specimens. Ventral arms are cream. Some specimens with only up to eight oral papillae. Skeletal elements ( Fig. 6View Fig)

Ophioderma guineense  was until now considered conspecific with O. longicauda  . It differs from O. longicauda  in having mainly single and flat dorsal arm plates and a higher number of arm spines ( Table 1). A previously unrecognized differentiating character is the light colouration of the ventral side of O. guineense  , in contrast to the dark colour of O. longicauda  , and the spots on the distal edge of the dorsal arm plates, which are absent in O. longicauda  . Considering the small morphological differences between the genetic clades in the species complex of O. longicauda  , we propose to treat O. guineense  as a valid species and we consider the recently collected specimens of genetic cluster C1 as conspecific due to their colouration and mostly single dorsal arm plates. The specimens of NHMD-225525 also concur with this assignment. As lectotype, we selected a specimen that concurs well with the original description ( Fig. 4View Fig A–C): Greef (1882) described the colouration of his specimens as on the dorsal disc blackish or dark brown, ventrally light green, the arms dorsally black with grey white rings, ventrally grey yellow, which fits with the material from Senegal ( Fig. 5View Fig). There are irregular dark rings on the pale brown dorsal disc of the smallest paralectotype examined ( Fig. 4GView Fig) and tiny dark spots on the dark grey-brown dorsal disc of the lectotype ( Fig. 4AView Fig), both have cream ventral discs and arms ( Fig. 4B, HView Fig). The largest of the examined paralectotypes has a faded brown dorsal disc and also some dark brown pigmentation remaining on the ventral disc ( Fig. 4View Fig E–F); one of the specimens seen only on photographs has a dark dorsal disc and dark pigment on the ventral disc, quite similar to O. africana  sp. nov. (see below, Fig. 7View Fig). Based on colour pattern, there may be a possibility that the type specimens are conspecific with O. africana  sp. nov. However, in addition to differences in colour, multiple dorsal arm plates are more common in O. africana  sp. nov. than in O. guineense  , which has led us to assign the Senegal specimens to O. guineense  .

Colour pattern tends to vary in most species of Ophioderma ( Hendler et al. 1995)  but O. guineense  differs notably from all species observed by this study from Mediterranean and East Atlantic localities (over 800 specimens in the collection of SMNH). These may be similar in dorsal colour with uniformly brown or mottled dorsal discs, sometimes with white spots, but they always have a dark ventral disc and lighter coloured, but never white, arms and oral frames ( Stöhr et al. 2009). Red pigments seem more common in O. longicauda  than green, and the ventral arms are often either reddish or green in the Mediterranean species, with the disc being brown or olive.

No embryos have been found in specimens of O. guineense  and this species is most likely a broadcast spawner. 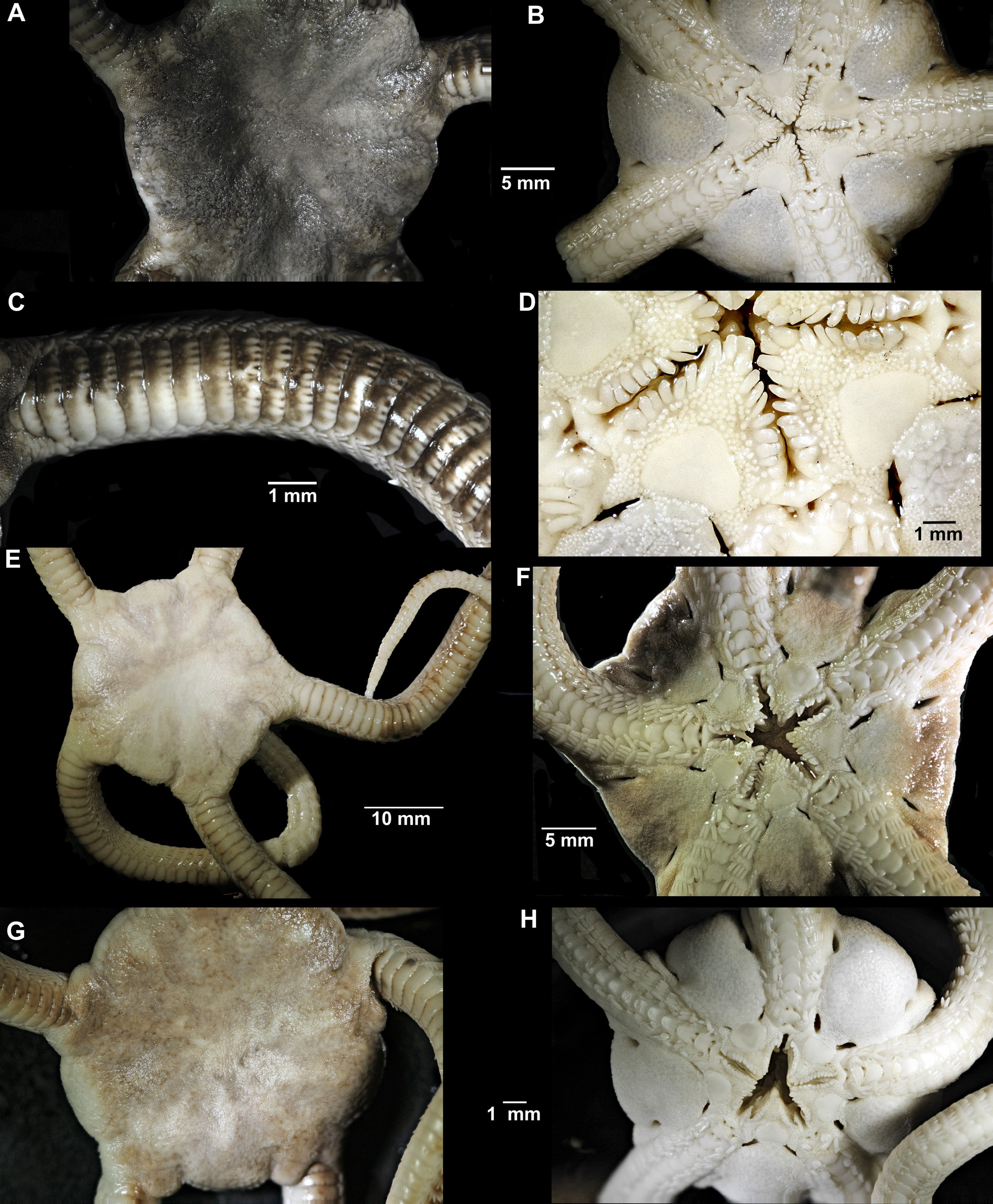