Remarks. Branchinella simplex   was described by Linder (1941) from material collected in 1937 by Dominic Serventy from Kofar Lake (= Kopai Lake, 30 o 16 ’ 11 ”S, 121 o 15 ’ 29 ”E, Timms, 2002) near Kalgoorlie, WA. Linder was so impressed with the male’s lack of a frontal appendage and simple structure of the second antenna that he named it ‘simplex’ to celebrate this fact. He also noted some peculiarities in the structure of the thoracopods: all thoracopods have a notch mid length on the praeepipodite, and the first thoracopod endites 3–5 have 2: 3: 5 or 2: 4: 4 anterior setae instead of the usual 2: 2: 1. Geddes (1981) also recorded these peculiarities in his review. Linder, however, also reported that the female had some unique features too: a long wide second antenna and short brood pouch. These features need further elaboration.

With maturity the wide band-like second antenna of the females assumes a bend mid length so that it becomes somewhat sabre-shaped ( Fig. 11 View FIGURE 11 D). While a few species of Branchinella   have wide second antenna the shape in B. simplex   is distinctive for Branchinella   . The brood pouch is generally bulbous in Branchinella   with a long posteriorly directed tube reaching abdominal segment 3 or 4, or rarely 5. However in B. simplex   , while somewhat bulbous the main dimension in transverse to the body axis and the tube leading to the gonopore is short ( Fig 11 View FIGURE 11 E).

Two other features are described here for the first time. The gonopod ( Fig 11 View FIGURE 11 C) with a single row of basally pointed triangular spines medially and a wide field of narrow spines laterally is of characteristic Branchinella   type (Brendonck, 1995; Rogers, 2006). The medial surface of the basal antennomere is not as simple as Linder (1941) and Geddes (1981) show. Generally there is a small tumidity protruding at about one third the length of the medial surface and in the Lake Carey, WA population there is an elongated tumidity on the distal half of the medial surface. Males from the population from the lake 5 km south of William Creek, SA lacks this feature.

Differential diagnosis. Branchinella simplex   is indeed different from all other known Branchinella   species, structurally and physiologically. This is partially reflected in a cladogram of Branchinella   species based on 16 S Mt DNA region ( Pinceel et al, 2012), in which it is well separated from the other halophilic species of Branchinella   which form their own clade. Most of these have females with wide band-like second antenna and male second antenna with no or small frontal appendages. However B. simplex   is separable from these on many morphological grounds, including extremely simply structured second antenna, unusual thoracopods (see above) and in females a bent second antenna and a transverse brood chamber. On the other hand it is curiously aligned with B. halsei   which displays many morphological differences from B. simplex   , including having basal lobes on the medial base of the second antenna, a small frontal appendage, usual thoracopods and in females a typical bulbous brood chamber with an elongated tube reaching back a few abdominal segments. This close relationship in the cladogram ( Pinceel et al., 2012) is possibly erroneous, as it is based on just one short section of DNA and apparently in this case is not representative of the full molecular differentiation in DNA.

Distribution and ecology. Branchinella simplex   was thought to be an endemic species of Western Australia found in the Goldfields ( Linder, 1941; Geddes, 1981; Timms, 2002), but these new records extend its distribution to central Australia and northern inland South Australia. Despite extensive collecting in the eastern inland its presence has not been recoded there ( Timms, 2007 and unpublished data).

Branchinella simplex   is tolerant of salinity, as first noted by Geddes (1981) based on a salinity of 21 g /L in Lake Annean at the time of collection. Subsequent records ( Table 1 View TABLE 1 ) confirm its marked salinity tolerance, the greatest for any Branchinella   species, commonly to about 30 g /L, rarely to 60 g /L (Timms, 2009). It is not known whether its body tissues are tolerant of these salinities as it is in two other species ( B. australiensis   and B.

Remarks. Since its discovery in the Murchison district, Western Australia, this species has been encountered only a few times, three times more in mid Western Australia (Timms, 2002, 2008), and in a few sites in the Paroo, northwestern New South Wales and southwestern Qld ( Timms and Sanders, 2002). Milner’s description and diagrams, together with those in Timms 2008 are adequate, except for the some detail of the frontal appendage and the thoracopods which are described in detail here.

Frontal appendage with a short trunk and two branches, each about four times longer than the trunk. A bilobed lamellar extension at the bifurcation almost as large as the main trunk. Each branch pseudosegmented and bearing 10 branches laterally and 9 medially, all except the basolateral branch in opposite pairs. Subbranches decreasing in length apically and knobbly with each knob bearing a narrow epidermal outgrowth on each side and terminally.

Fifth thoracopod with endite 1 + 2 and 3 evenly curved, the former about three times the size of the later. Anterior seta of endite 1 naked, and about half the length of adjacent posterior setae. Anterior seta of endite 2 about half the length of endite 1 anterior seta and bearing a strong pecten of spines and attended at its base by a small smooth spine. Endite 3 with an anterior setae similar in length to the first anterior seta, and bearing a strong pecten of spines and attended at its base by a short naked spine. Endites 4–6 asymmetrical and covered with small spines. Endites 4 and 5 with two anterior setae and endite 6 with one anterior seta, representing two types. The first on all three endites with a fine pecten most of their length and a few spinules basally; the seta on endite 6 a little longer than the other two. The second setal type on endites 4 and 5 only, comparatively short (half length of adjacent anterior setae) and almost naked except for a few widely spaced spinules. Posterior setae of all endites long and numbering about 60 on endites 1 +2, 20 on endite 3, then 3,2, 2 respectively on endites 4–6. Endopod squarish with a wide shallow notch apically. It bears 4 short feathered setae medioapically, each inserted on the mid dorsal surface of an elongated knob (the whole structure like a sledge hammer coupled to the endopod), another 3 more normally inserted before the broad apical notch and 13 more on small raised knobs on the remaining apical surface and lateral edge. Exopod with about 33 feathered setae, most about double the length of the endopod setae and each on a similar small raised basal knob. These small knobs with 1–4 spinules, but the large knobs on the medial endopod without any outgrowths. Epipod elongate oval and naked. Praeepipodite large (about equivalent to exopod + endopod) and with smooth edges.

The significant structures on this thoracopod are the knobs on the medial surface of the endopod. As far as is known they are unique to B. wellardi   and they clearly differentiate it from a closely related species, B. herrodi   sp.nov. (see above). 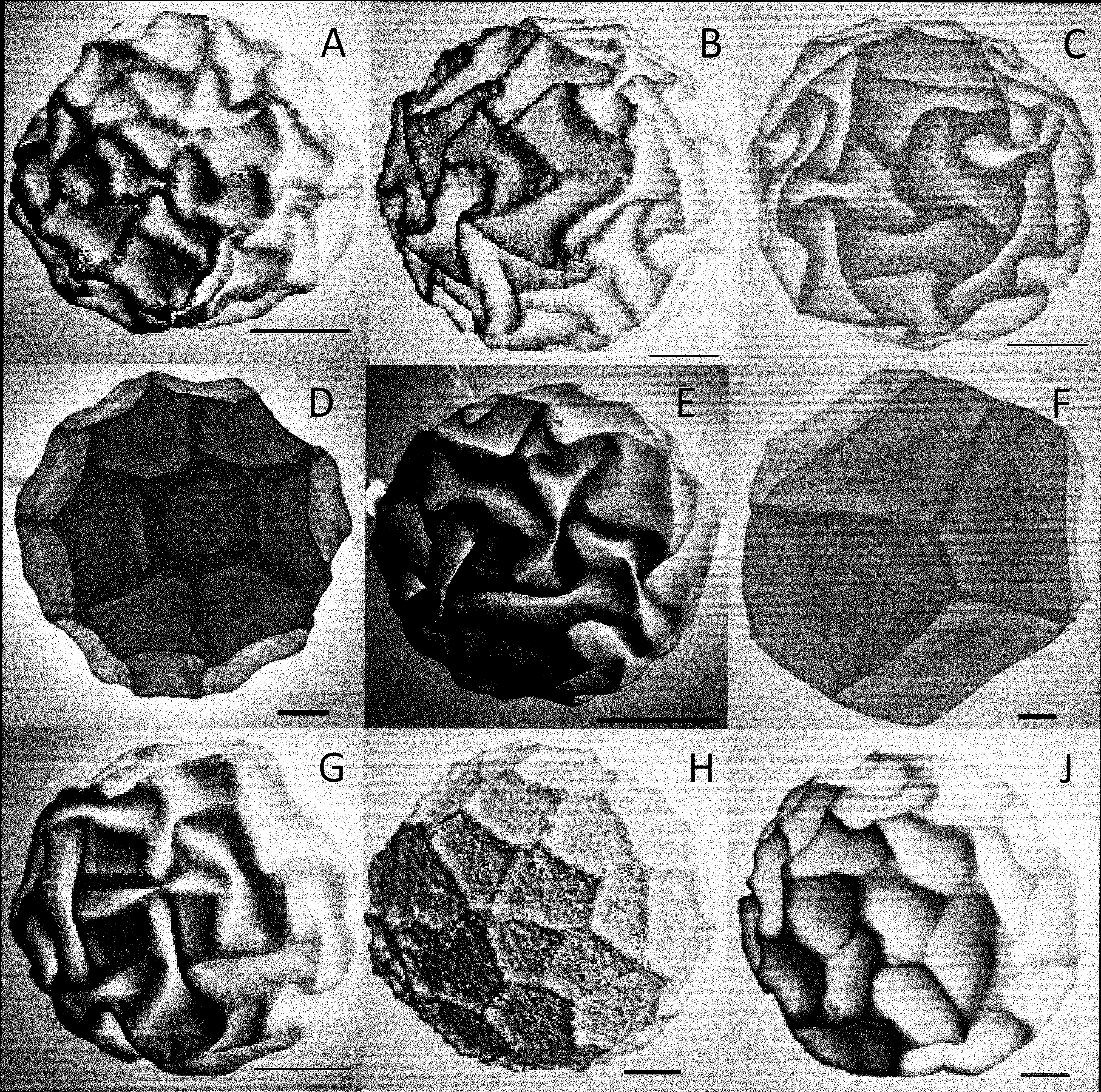 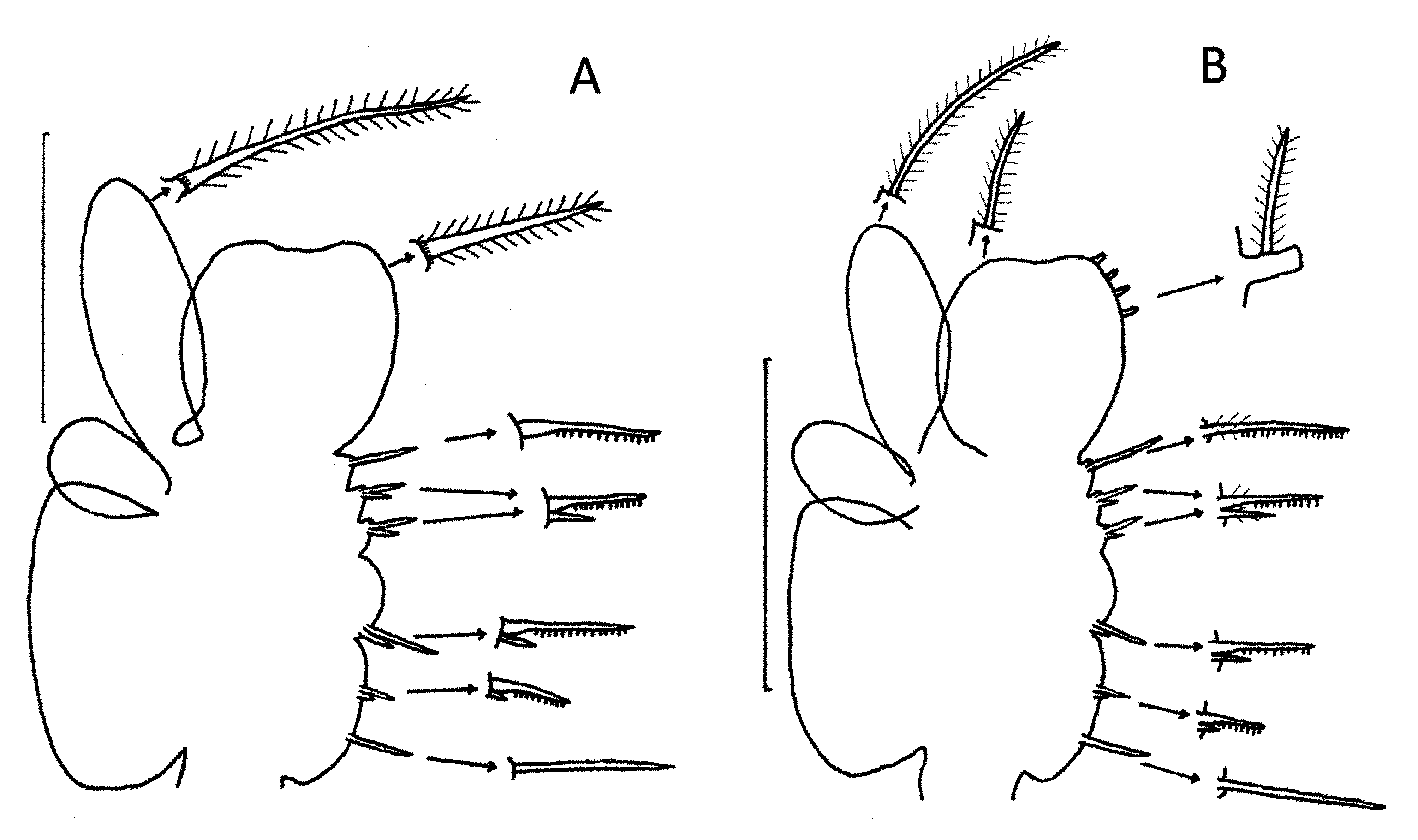 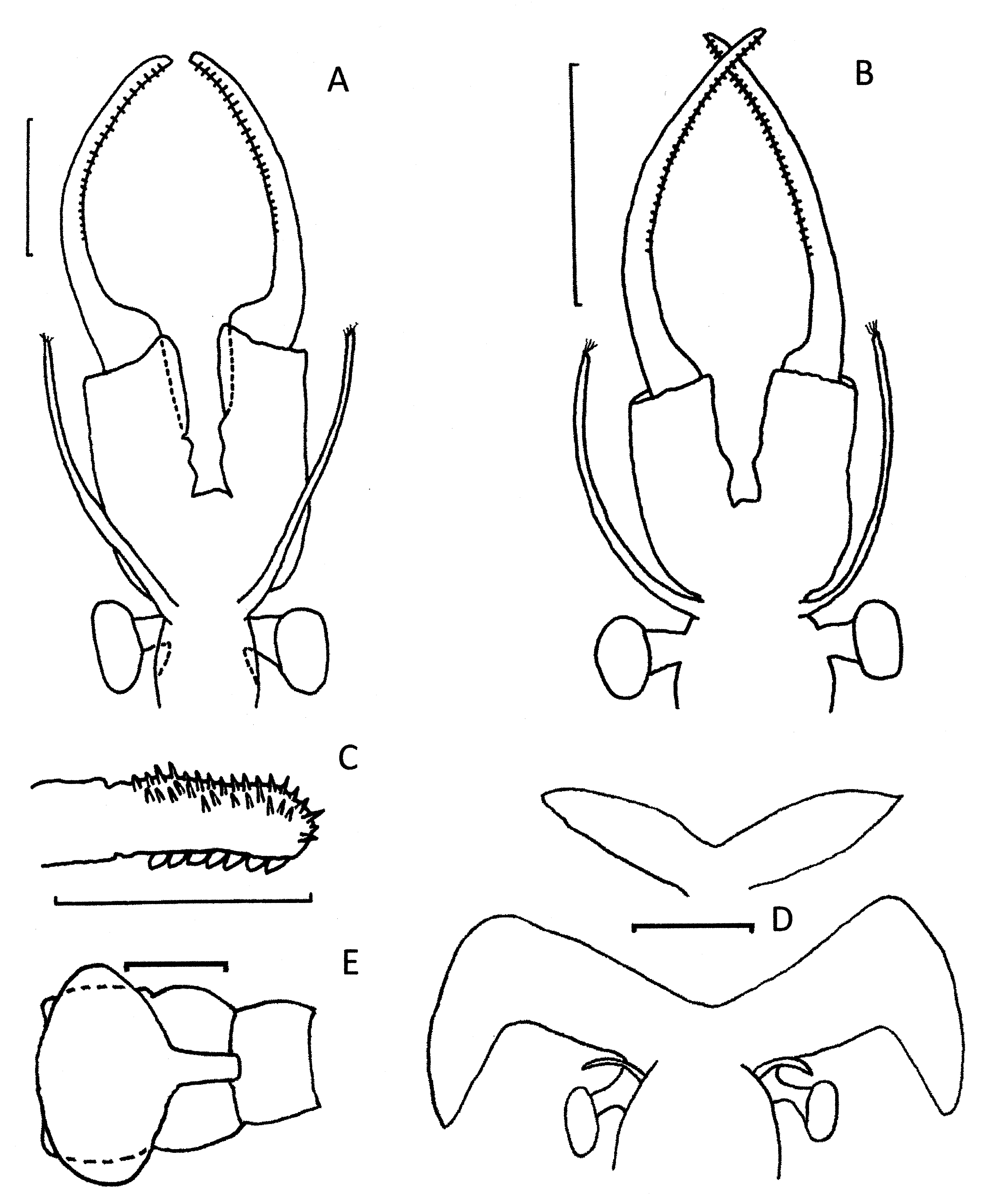