Paratypes. MZFC 27467–27471, five adult males, collected along the side of a dirt road between El Sauz and El Terrero, Municipality of Minatitlán, Colima, Mexico, collected by Chris I. Grünwald, on July 14, 2008; MZFC 27473–27475, two adult males and a young adult, dirt road between El Sauz and El Terrero, collected on the same day as the holotype by Jacobo Reyes-Velasco and Alexander Hermosillo-Lopez; MZFC 27483, adult male, 6.7 km SW of El Terrero, on road to El Sauz, collected by Jacobo Reyes-Velasco and Gabriela Zamora-Silva on July 15, 2012 ( Fig. 2 View FIGURE 2 ).

Diagnosis. Eleutherodactylus grunwaldi   is a member of the E. longipes   species series of the subgenus Syrrhophus   as defined by Hedges et al. (2008). It is one of the largest members of the species series, with adult males measuring 28.4–32.4 mm SVL. Vocal slits are present in males; digital discs are greatly expanded, usually three times the width of narrowest part of digit on fingers three and four ( Fig. 3 View FIGURE 3 A); shape of digital discs is similar to the condition seen in E. longipes   in Lynch (1970; Fig. 1 View FIGURE 1 F), which were described as triangular; first finger shorter than second finger; snout angular in dorsal view (as defined by Savage, 2002 p. 171), and acuminate in profile; the head slightly longer than wide; tympanum width 40 % – 50 % of eye width, never more than 50 %; body robust but thinner than head; no compact lumbar glands; dorsal coloration consisting of greenish or yellowish irregular blotches, spots, or reticulations on dark background; no mid-dorsal stripe or light interorbital bar are present; dorsal and ventral skin smooth; ventral coloration white; no dark or pale interorbital bar or bars on thighs; tympanum medium to small, diameter of tympanum maximum 50 % of diameter of eye; iris copper-green.

Eleutherodactylus grunwaldi   differs from the other members of the subgenus, with the exception of E. dennisi   , E. longipes   and E. saxatilis   by the presence of digital discs on the hands which are three times the width of the narrowest part of the digit ( Fig 3 View FIGURE 3 A). It can readily be distinguished from E. saxatilis   by the absence of compact lumbar glands, as well as broader digital discs on the fingers, usually double the narrowest width of the third and fourth digits in E. saxatilis   and from two and a half times to three times the width of the narrowest part of the third and fourth digits in E. grunwaldi   . This species can be distinguished from E. dennisi   and E. longipes   by having a smaller tympanum to eye ratio, always 50 % or less, as opposed to 50–65 % in male E. dennisi   and 60–90 % in male E. longipes   ; E. dennisi   also has a conspicuous light interorbital bar, which E. grunwaldi   lacks. While E. longipes   has a light ground color with darker blotches and/or spots, and a dark brown interorbital bar or triangle, E. grunwaldi   shows a dark ground color with yellowish marbling or reticulations and no interorbital marks. The new species is distinguished from most other members of Syrrhophus   , except for E. saxatilis   and some members of the E. marnockii   species group of Hedges et al. (2008) by its dorsal coloration.

Coloration in life pale gray on the lateral surfaces, with almost no pattern, while dorsal surfaces dark gray to blackish, with network of greenish-yellow botches forming reticulations on the back, head, neck, forelimbs and hind limbs; venter white; hands and feet pale gray without markings, though some faint markings present on hands; uninterrupted gray line running from snout through nares and lower half of eye, continuing past tympanum and axilla where it grades into lateral gray coloration. Coloration in preservative dark, ground coloration of varying shades of brown, with pale blotches sometimes forming uniformly pale grayish tan reticulations; ventral coloration is white.

Variation. Mensural variation is presented in Table 1. This species shows remarkably little color variation when compared to some other species in the subgenus (e.g., E. modestus   ). The color pattern consists of greenish yellow or yellowish blotches, spots or reticulations on a black ground color. The amount and intensity of the pale blotches varies such that some specimens appear to be dark frogs with pale colored blotches, while others have more intense reticulation.

Distribution and ecology. This species is known from the Sierra de Manantlán in the municipalities of Minatitlán, Colima, and Tolimán, Jalisco ( Fig. 6 A View FIGURE 6. A ). It is probably distributed throughout the Sierra de Manantlán, and may range north into some of the other coastal sierras of Jalisco (Sierra de Cacoma, Sierra de Talpa). This species has been collected between 1300–2200 m in the Sierra de Manantlán Biosphere Reserve and at lower elevations (~ 800m) in the Grutas de Toxín in Jalisco. It inhabits tropical deciduous forest, Madrean pine-oak woodland and the ecotone between tropical deciduous forest and pine-oak woodland. Like E. saxatilis   , this species appears to be strictly saxicolous and found almost exclusively on limestone outcrops. All specimens have been found on limestone, either in outcrops, sink holes or caves. A single specimen was found while calling from a tree, however the ground consisted of soil mixed with broken limestone. Frogs were collected during the months of June, July and August, which correspond to the beginning of the rainy season and when breeding appears to take place. One specimen was collected in the dry season (February) from inside a cave, and many other individuals were seen active on the walls of the cave. A photograph of the type locality is shown in Figure 6 View FIGURE 6. A B.

Etymology. The species epithet is a patronym for German-Mexican naturalist Christoph I. Grünwald, who collected the original specimen (now lost) on July 18 th, 2005. This original specimen came from near 2200 m at 4.8 km E of El Terrero, Municipality of Minatitlán, Colima. 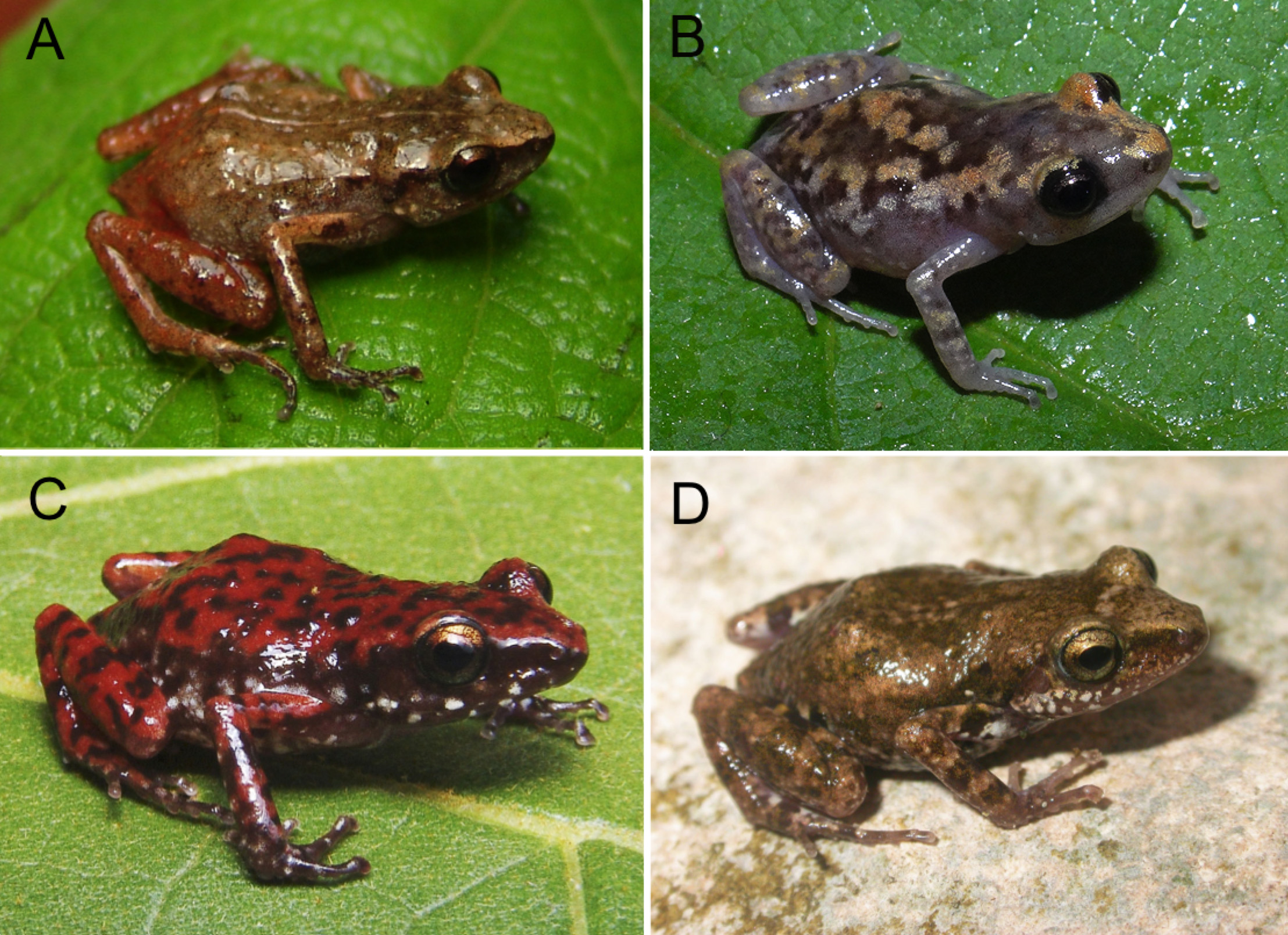