Etymology: The epithet nemorosum   refers to broadleaved trees which are thought to be the mycorrhizal partners of this species.

Description: Basidiomata terrestrial, stipitate, medium-sized and fleshy, solitary or clustered, ofen in small groups. Pileus 40–100 mm broad, irregularly rounded to lobate, initially convex or umbonate, becoming more plane with age and sometimes developing a depressed centre; margin thin, undulating and remaining long incurved; cuticle initially almost smooth, matt, becoming pellicular and sometimes shiny in places, occasionally showing superficial tearing to produce a few marginal areolae and zones of poorly-developed appressed scales, and more frequently becoming deeply lacerated to produce radial fissures in the underlying paler context and a central zone of coarse block-like scales; initially pinkish or vinaceous brown, with whitish growing edge, becoming progressively darker reddish or vinaceous brown towards the centre and blackening with age. Stipe 20–60 × 10–30 mm, cylindrical or basally tapered with a smooth or fibrillose texture and sometimes covered by rudimentary or entire spines; concolourous with the young pileus at the apex, darker below and distinctly bluish–green to black at the base with whitish mycelium binding the soil. Spines to some degree decurrent, up to 5 × 1 mm, pinkish brown with whitish tips at first, becoming progressively vinaceous and browner from the base. Flesh not zoned, whitish with pink tinges becoming more vinaceous when exposed to the air by tearing of pileal surface, with distinctive greyish- or bluishgreen patch within the base of the stipe, smell farinaceous but with a penetrating fruity element, taste farinaceous and bitter. Chemical reaction: when a drop of 3 % KOH is added to dry specimens, the pileipellis becomes darker brown and the flesh becomes pale brown. Hyphal system monomitic, all hyphae simple septate, tramal hyphae of spines up to 6.5 µm wide. Basidia clavate, with four sterigmata. Basidiospores brown, subglobose or short ellipsoid, irregularly tuberculate, with oblique apiculus, (3.0‒)3.4‒5.1(‒5.3) × (2.8‒)3.0‒3.8(‒4.5) µm, av. = 4.1 × 3.4 µm, Q = 1.0‒1.6 (n = 4/100, measurements from the lateral side without tubercles), tubercles numerous, 0.2‒0.8 µm high, with rounded, flat-topped or exsculpate apices.

Ecology and distribution: We are of the opinion that this species is ectomycorrhizal, although we are currently unaware of any ectomycorrhizal root tip DNA evidence to confirm this.From field notes accompanying the specimens sequenced, we conclude that, although records are comparatively sparse, this species is found in mixed or broadleaved woodland and is therefore almost certainly a mycorrhizal partner of various broadleaved tree species. Hosts are likely to include Castanea sativa   , Fagus sylvatica   and Quercus spp.   It should be noted, however, that there were no representatives of Fagaceae   recorded near our species in the mixed woodland present at the sampled Swedish locality (see Additional specimens examined). Our choice of epithet for this species therefore reflects our greater degree of uncertainty regarding the range of its mycorrhizal partners compared to our state of knowledge regarding H. fagiscabrosum   . It has been found in sandy or gravelly soils,sometimes with other stipitate hydnoids, and seemingly with a preference for raised or sloping ground or similarly nutrient poor microhabitats.The true extent of its European distribution is currently unknown due to the current paucity of known collections. It may have been misdetermined as a range of Sarcodon species  in the past, but there are so few records to date that it could well be a genuine rarity. Thus far, we have produced molecular evidence for its presence in northern and western Europe (Denmark, Norway, Sweden and the UK), although this is currently restricted to just a single site in each country.

Notes: This species has been described and illustrated online under the name Sarcodon regalis sensu Strandberg & Borgen   in Danmarks svampeatlas ( Strandberg & Borgen 2020) wherein it was documented repeatedly at a single Danish location between 2002 and 2019. It has also been recognized as “ Sarcodon sp. 2   ” in an unofficial species conservation assessment (Data Deficient) in the UK ( Smith et al. 2016). Two other names (see above) have been misapplied to this species in Norway and Sweden and both are likely to have arisen due to the dominant dark purplish brown pigmentation of its mature basidiomata. We do not know if this species occurs in southern Europe but, if it is present in any historical collections, there is at least one further name that should be included in the search, namely S. cyrneus   . This is another broadleaved tree associate which was described from two Corsican collections ( Maas Geesteranus 1975a, b). Its protologue refers to its pinkish and purplish brown colours and poorly defined pileal scales, morphological characters which are reminiscent of H. nemorosum   , but, critically, the two species differ in the pigmentation at the base of the stipe. Indeed, Maas Geesteranus (1975a) keys his species in section Squamiceps rather than section Scabrosi   based on its lack of bluish or greenish colours in the stipe base. Furthermore, the illustration of the dried holotype in Maas Geesteranus (1975a) seems too pale to be H. nemorosum   and there is also a difference in spore length. Bearing in mind that Maas Geesteranus’ (1971) spore measurements of Hydnellum   and Sarcodon   always included the ornamentation, he stated that the length of “probably not mature” spores of S. cyrneus   ranges from (5.8‒)6.3‒7.3 µm whereas the corresponding values obtained for our specimens of H. nemorosum   (n = 100) are 4.5‒5.8(‒6.0) µm. It would have been very interesting to include authentic S. cyrneus   in our analyses but, unfortunately, our attempts to generate a sequence from type material were unsuccessful (see Discussion for further remarks on S. cyrneus   ). 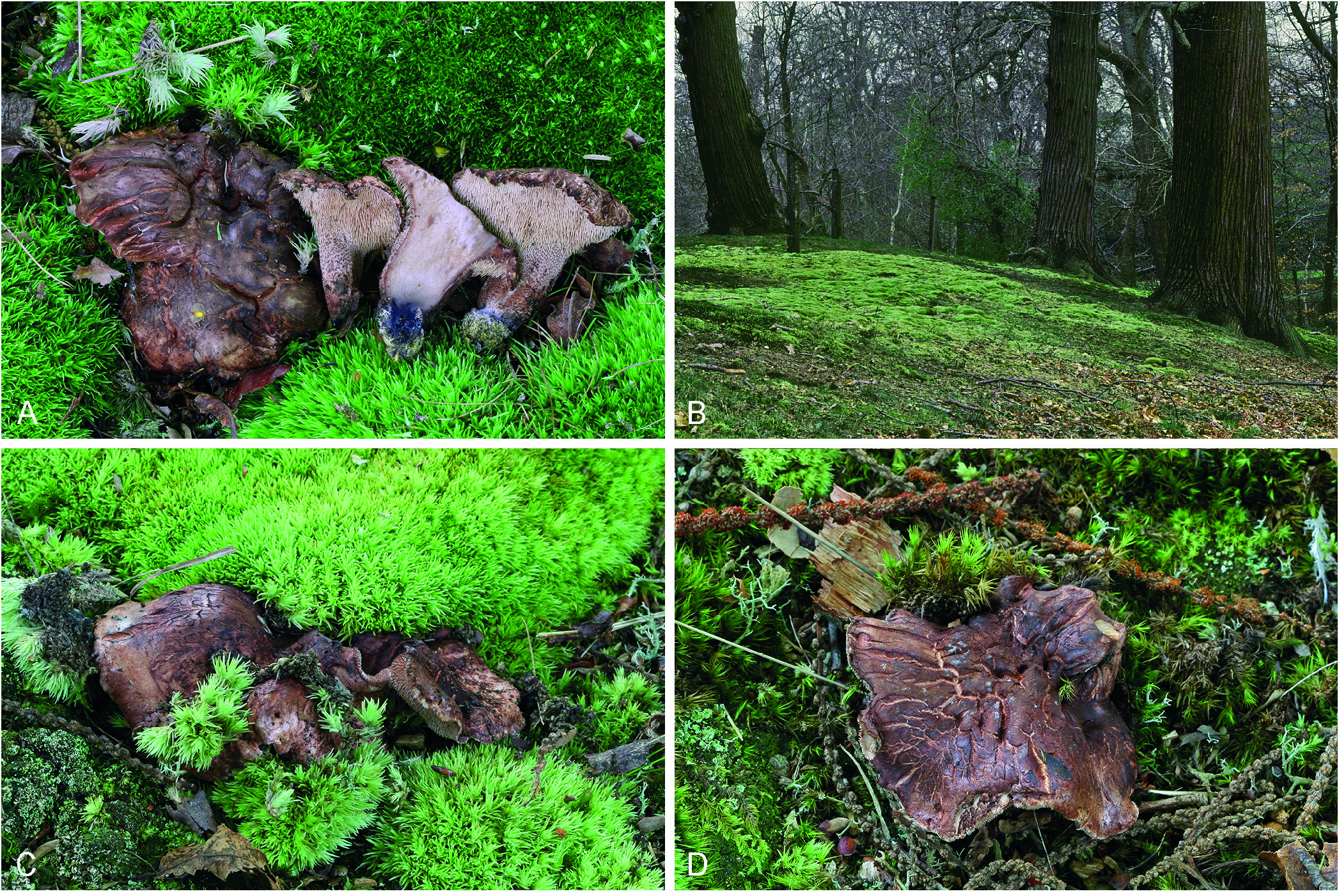 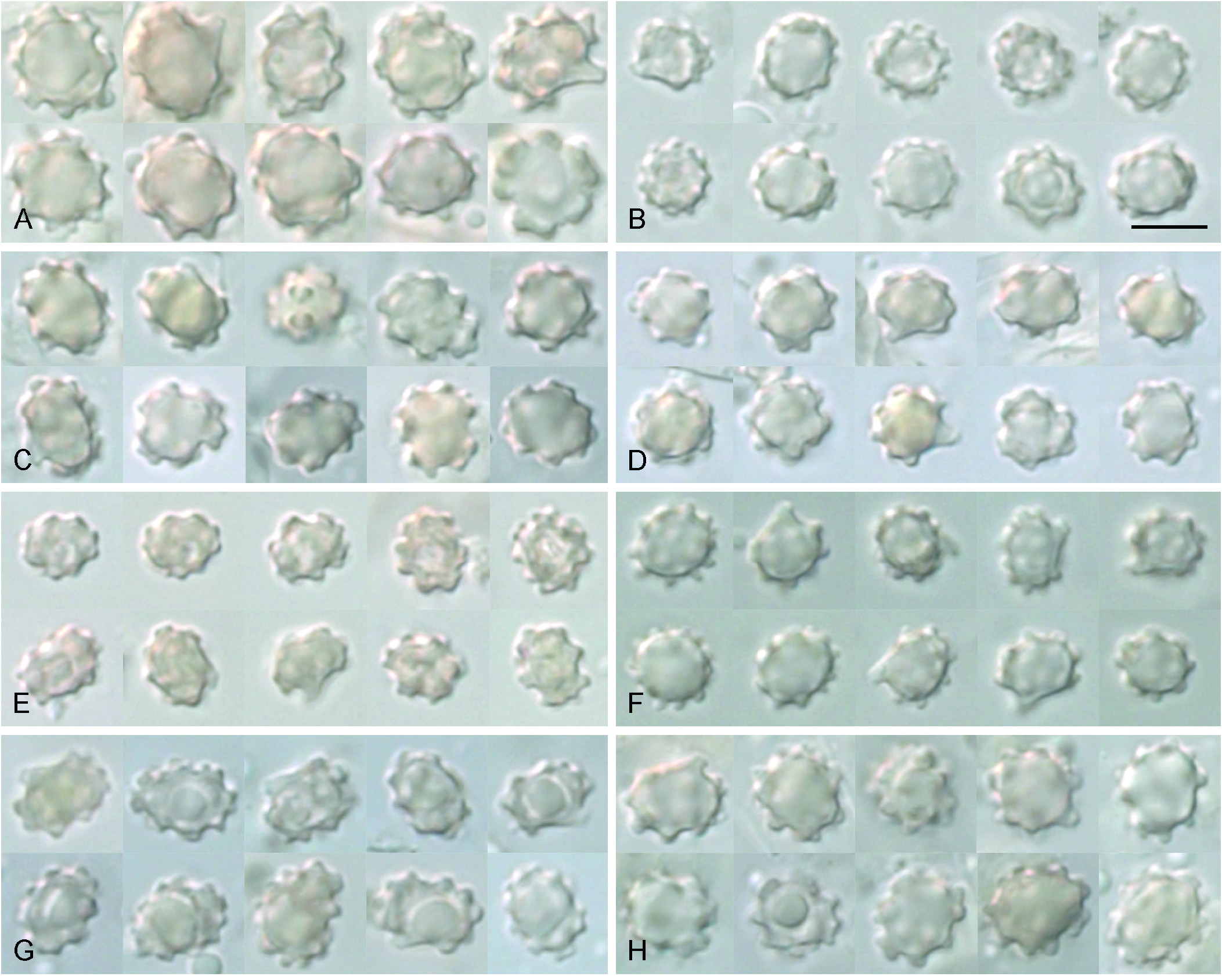