Diagnosis. The worker of Plebeia emerinoides   is characterized by the following combination of features: paraocular yellow band reaching at most two thirds of the eye length; the clypeus more or less yellow (see variation below) but always with an apical dark band ( Figs. 6–8 View FIGURES 6 – 14 ); the yellow band on the scutum narrow, beginning usually at the anterior level of the tegula; the yellow band on the posterior margin of the scutellum usually interrupted medially ( Fig. 9 View FIGURES 6 – 14 ); the sparse punctation of the scutum (punctures between notauli separated by 2 puncture diameters) with shiny integument between punctures; the plumose, branched hairs on the disk of the scutum; and the reduced malar space, 0.4 times the diameter of the third flagellomere. The male is characterized by the shape of the fifth metasomal sternum ( Fig. 12 View FIGURES 6 – 14 ), with long, triangular lateral lobes directed posteriorly and bearing very long setae on the outer margin. The sixth metasomal sternum and the genital capsule are as in figures 13 and 14.

Comments. This species has been referred to as " nigriceps   " in some recent contributions and catalogs ( Camargo & Moure 1988; Camargo & Pedro 2007), where the name emerinoides   has been considered a junior synonym. We contend that this synonymy of emerinoides   under nigriceps Friese   is unfounded.

Filippo Silvestri collected numerous Meliponini   and studied the nests of many of them during his journey to northern Argentina, Paraguay, and Brazil in 1900. Later he published a report of his observations ( Silvestri 1902), including the description of three new species, Trigona emerinoides   from S. Ana, Misiones among them.

Camargo & Moure (1988) studied the specimens collected by Silvestri, which are preserved in Portici, Italy. They identified a series of 17 workers and one male as the type series of Trigona emerinoides Silvestri   , and designated a worker as the lectotype. The series was labeled "Miri, S. Ana," and " Trigona   sp.? bei emerina, 1900, Friese det." Silvestri (1902) stated that the specimens that he was describing as T. emerinoides   came from Santa Ana, Misiones, where he studied a nest of this species. Camargo & Moure (1988, p. 293) erroneously attribute the locality Santa Ana to a place in Paraguay. Camargo & Pedro (2007) also cite "Santa Ana, Paraguay" as the type locality. Silvestri (1902), in his contribution on the Meliponini   , does not clearly state the country for most of the localities that he mentions, and this is the case for "Santa Ana, Misiones." This brief mention of the type locality may be seen as confusing, because there are both a department of Misiones in Paraguay and a province of Misiones in Argentina, regions that already had these names by 1900. But, in a further contribution on termites, Silvestri (1903, p. 5) lists by country all the localities that he surveyed in South America, including also the dates of visit. From this list it is clear that the type locality of T. emerinoides   is Santa Ana, province of Misiones, Argentina ( Fig. 16 View FIGURES 15 – 16 ), and that the specimens were collected between June and July of 1900.

This confusion on the locality Santa Ana is connected to a misinterpretation of T. nigriceps Friese. Camargo & Moure (1988, p. 309)   suggest that Friese (1901) based Trigona nigriceps   on specimens collected by Silvestri. There is no basis for this supposition because Friese (1901) clearly states that the two syntypes of T. nigriceps   came from Villarica, Paraguay, collected by Burgdorf (without indication of date) ( Fig. 16 View FIGURES 15 – 16 ). In the same paragraph, Camargo & Moure (1988) then discuss a specimen preserved at the Museu de Zoologia in São Paulo (MZSP #96041 with printed label "Villarica, Paraguay, 1900," overwritten by hand "S. Anna") identified by Friese as T. nigriceps   , as being possibly one of the two specimens used by Friese in the original description of T. nigriceps   . They indicate that the São Paulo’s specimen is identical to those of the type series of T. emerinoides   . This specimen had already been studied by Moure (1962, p. 8), who acknowledged that even though it was identified by Friese himself as T. nigriceps   , it does not agree with Friese’s description, that clearly states that the two syntypes of T. nigriceps   had the face entirely black, with the labrum and mandibles reddish. Contrasting with Friese’s original specimens, the specimen in the Museum of São Paulo bears yellow marks on the clypeus, supraclypeal area, paraocular areas, mandibles, and labrum. Hence, the São Paulo specimen cannot be considered a syntype of T. nigriceps   , albeit identified by Friese with this name. Thus, its agreement with the type series of emerinoides   does not support the synonymy proposed by Camargo & Moure (1988).

We have not been able to locate the original specimens of T. nigriceps Friese   , which seem to be lost. A better study of the local fauna of the Villarica area in Paraguay will help to solve the identity of T. nigriceps   . In Argentina, Friese's description would fit the color pattern of Plebeia molesta (Puls)   , although the size stated by Friese (3.5 mm long) is rather small for P. molesta   , which ranges between 3.8 and 4.5 mm in length. We have not seen any specimens of P. emerinoides   with the face entirely black and with reddish labrum and mandibles. On the other hand, we have studied specimens of P. emerinoides   from Villarica (43 workers and 15 males, Villarica, Paraguay, 3-II-1946, 8-IV-1947, F. Schade, MLP) and these specimens have a pattern of extensive yellow markings (as in Fig. 6 View FIGURES 6 – 14 ) similar to that described by Silvestri and illustrated by Camargo & Moure (1988, figures 22 and 24). We consider T. nigriceps Friese   as a species incertae sedis until more information is gathered.

The pale maculations of P. emerinoides   vary in extent within and among populations from Argentina. In specimens from the northern province of Misiones the maculations are usually well-developed ( Fig. 6 View FIGURES 6 – 14 ), whereas they are reduced in specimens from southern provinces, such as Entre Ríos and Buenos Aires ( Figs. 7 and 8 View FIGURES 6 – 14 ). In a series of 55 workers from the same nest (Campo Ramón, Oberá, Misiones) the coloration of the clypeus varies from entirely yellow except for the apical dark band (as in the lectotype, figured by Camargo & Moure 1988) to yellow with a paramedian brown stripe or median spot, or with a brown center margined above and laterally by yellow. This darkening of the center of the clypeus is more pronounced in some specimens from Buenos Aires, in which most of the clypeus is nearly entirely dark brown with a lateral triangular yellow spot at each lower corner (as Fig. 8 View FIGURES 6 – 14 ). The paraocular yellow band is always present, but its width varies, being usually less developed in specimens from Entre Ríos and Buenos Aires than in specimens from Misiones. The yellow spot on the supraclypeal area is always present and distinct. This reduction of the yellow color on the face also occurs in males. Specimens from the southern end of the distribution have the clypeus and the under surface of the scape with extended brown areas ( Fig. 11 View FIGURES 6 – 14 ). Nevertheless, the sternal and genitalic structures of males from Buenos Aires and Misiones are identical. The pale maculations in the mesosoma vary even among specimens from the same nest. In the series of workers from Campo Ramón, Misiones, the pale band on the posterior margin of the scutellum is usually briefly interrupted medially, but in some specimens it is uninterrupted and in others it is reduced to two yellow spots.

Therefore, we conclude that there is no basis for claiming that P. emerinoides   is a junior synonym of T. nigriceps   and consequently we maintain here that P. emerinoides   is the valid name of the species. This species of Plebeia   is widespread in the province of Misiones in Argentina, and is also known from several localities in the provinces of Corrientes and Entre Ríos along the Uruguay River, reaching to the south the northern portion of the province of Buenos Aires ( Fig. 16 View FIGURES 15 – 16 ). 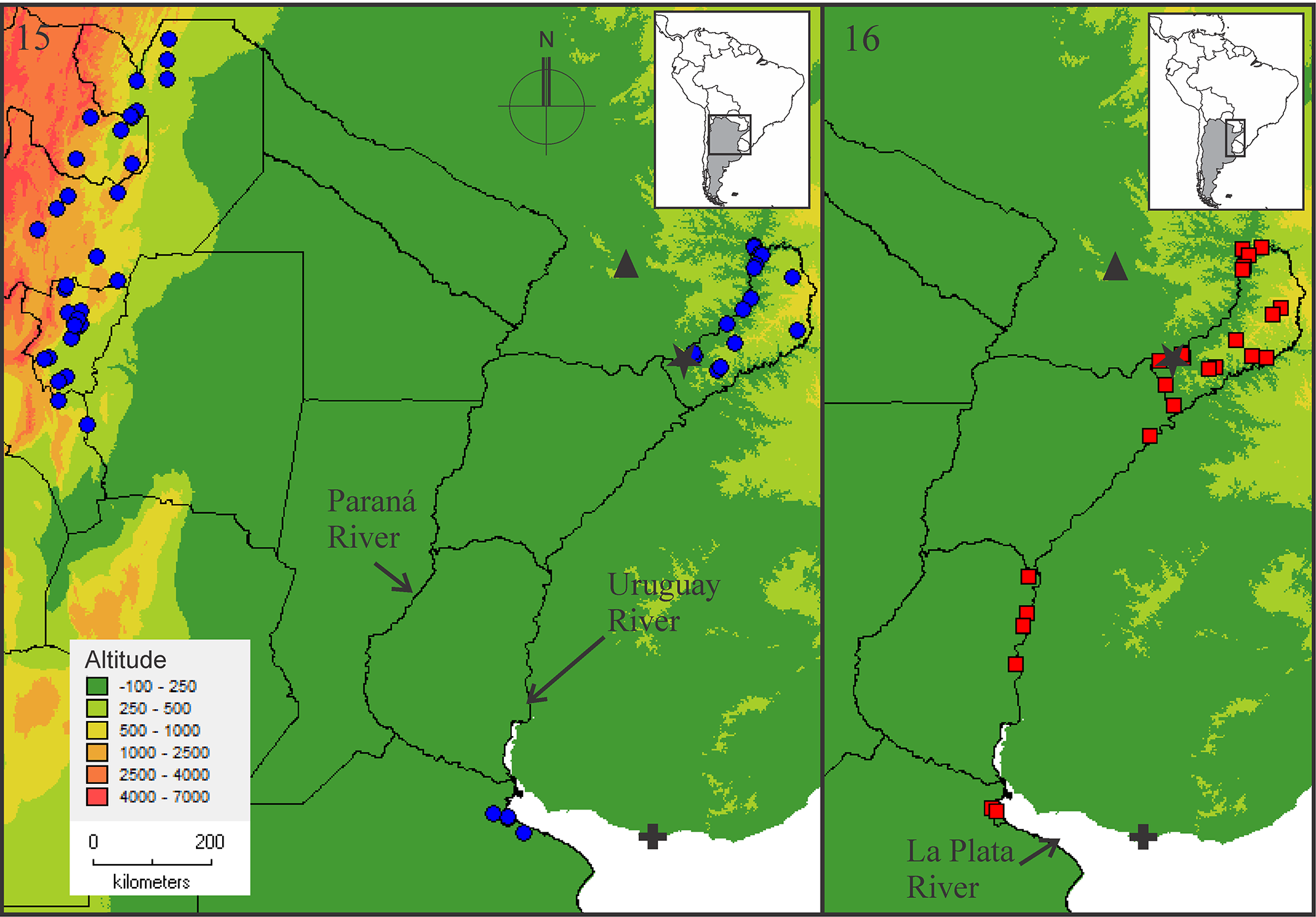