Diagnosis. Miropotes waikerieyeties   strongly resembles M. burringbaris Austin, 1990   , and keys to that species in Fernández-Triana et al. (2014a), but can be distinguished from it both on molecular data (COI barcode> 10% divergent) and by the carina running from the anterior point of the pentagonal propodeal areola to the anterior edge of the propodeum being significantly shorter, i.e. the pentagonal areola covering a larger proportion of the length of the propodeum ( Fig. 8 View FIGURE 8 ).

Mesosoma. Anteromesoscutum regularly punctate, clearly defined smooth and shiny spaces between large punctures; number of pits in scutoscutellar sulcus approximately 8, but irregular in size and definition and in holotype not in a straight line, the line of pits curved downwards at centre producing a smooth space above pits in centre of scutellar disk. Scutellar disc very smooth, with only very shallow pits associated with setae. Propodeum smooth, complete pentagonal areola, taller than it is wide (measuring from inside the areola carinae, anterior-posterior line ( Fig. 8A View FIGURE 8 .ii) 0.21 mm, transverse line ( Fig. 8A View FIGURE 8 .iii) 0.18 mm), with the carinae from the top of the pentagon to the anterior edge of the propodeum ( Fig. 8A.i View FIGURE 8 ) measuring 0.04 mm, ratio of the length of that carina to the anteriorposterior line 0.19.

Etymology. This species was named by the 2020 Year 6/7 class of students at Waikerie Primary School, who named it for the school and the Youth Environment Team (nicknamed ‘the YETies’) who led the project. The species epithet is a noun in apposition.

Distribution. The species as it is currently defined is found in the Riverland region of South Australia, near Canberra in the ACT, and south of Brisbane in Queensland. The actual distribution of the species may be more extensive.

Remarks. Miropotes waikerieyeties   strongly resembles M. burringbaris   , and without molecular information we would have hesitated to describe it as a new species. Partial COI sequences (approximately 150 bp) of two paratypes of M. burringbaris   , one from the holotype locality of Rex Range in northern Queensland (BOLD: AUMIC555-20, QDPC 0-169243) were sequenced, and when compared to the available sequences of Microgastrinae   , the sequence of the paratype from the holotype locality was most closely related to a full length sequence of a specimen of Miropotes   sp. from Kuranda, northern Queensland (BOLD: AUMIC335-18), differing by four base pairs. This 658 bp COI sequence (AUMIC335-18), is over 10% divergent from the COI sequences of the specimens of Miropotes waikerieyeties   ( Figure 9 View FIGURE 9 ).

Whilst the partial COI sequences of the paratypes of M. burringbaris   contain several ambiguities, they are clearly distinct from the sequences of M. waikerieyeties   (9 base pairs different). This relatively large divergence, even over just 150 bp, along with the consistent morphological character (at least on the available specimens) of the propodeal areola proportions, allow us to feel confident that M. waikerieyeties   is a distinct species from M. burringbaris   . The propodeal areola was measured on images of the holotype of M. burringbaris   from the original description ( Austin 1990) and on two female specimens from the holotype locality (QDPC 0-169243 and 0-169244).

Some of the comments from students about their favourite part of the program included (spelling and grammar corrected for clarity): “that we got to name a bug”, “finding out about the new wasp”, “us checking the trap”, “finding a new species” and “learning about the funny [species] names and cool facts”. As the feedback survey was conducted immediately after a workshop that included lollies (candy/sweets) as part of a classification activity, several students also responded that the lollies were their favourite part of the whole program. This highlights that the timing of feedback surveys can have a significant impact on the responses, and it needs to be carefully considered when evaluating programs. The word cloud of these responses (n=27) suggests that students really appreciated the fact they were finding ‘new’ wasp species ( Fig. 11 View FIGURE 11 ).

Students listed many comments under the question “What is something you learnt from the Insect Investigators  project?”, including several which highlight that despite the difficulty in quantitatively evaluating the impacts of the program, students had clearly absorbed information and new knowledge. Comments included (spelling and grammar corrected for clarity): “that not all wasps sting”, “lots of bugs live in Cowell, they’re just really small”, “that new [species] can come [from] anywhere”, “that there are lots of unnamed bugs”, “that there are rules about naming insects”, “some [wasps] lay eggs in butterflies” and “that there are tiny, tiny wasps as well”. FIGURE 8. Comparison of the propodeal areola between the holotype of A–B) Miropotes waikerieyeties and C) a female paratype of Miropotes burringbaris from the holotype locality of Rex Range Lookout (QDPC 0-169243). A) The measurements used for the propodeal areola measurements in the description and diagnosis of the new species: anterior-posterior line (ii, blue), transverse line (iii, yellow) and the carinae from the top of the pentagon to the anterior edge of the propodeum (i, red).

FIGURE 8. Comparison of the propodeal areola between the holotype of A–B) Miropotes waikerieyeties and C) a female paratype of Miropotes burringbaris from the holotype locality of Rex Range Lookout (QDPC 0-169243). A) The measurements used for the propodeal areola measurements in the description and diagnosis of the new species: anterior-posterior line (ii, blue), transverse line (iii, yellow) and the carinae from the top of the pentagon to the anterior edge of the propodeum (i, red). FIGURE 9. COI and Wingless Bayesian phylogeny of the Australian specimens identified by the BOLD as Miropotes, showing the relationship between Miropotes waikerieyeties (in red) and the partial sequence of the M. burringbaris paratype and closely related specimen from Kuranda (in yellow). Number in brackets (n=x) represent the number of sequences in the collapsed clade. Branch support values are posterior probabilities. FIGURE 10. Student responses (n=32) to the Likert-scale question: “Over the past two months or so, did your views of wildlife and science change in any of the following ways? If so, how?” 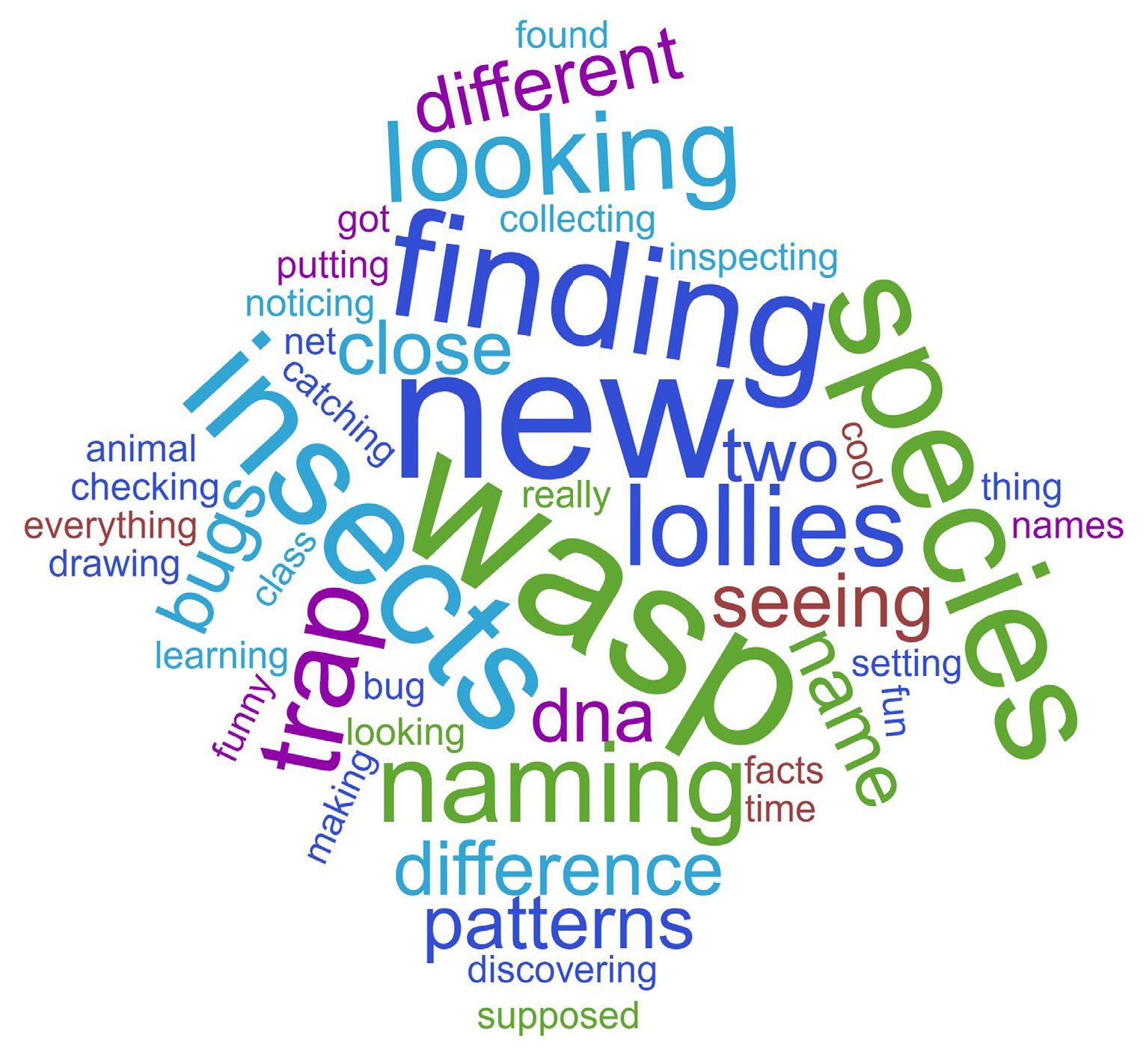 FIGURE 11. Word cloud of the written responses (n=27) to the question “What was your favourite part of the Insect Investigators program”. The size of the words is relative to the number of times that word appeared in the responses; the largest word, ‘new’ appeared 10 times, whilst the smallest words appeared once.