Additional material examined. Paratype ♀ of Lepthyphantes acoreensis Wunderlich, 1992   (misidentification), Flores, Lago do Seco (this should probably refer to Lagoa Seca, as there is no lagoon in Flores with that name), SNM 60150 View Materials – 124, epigynum missing.

Etymology. The species name refers to the local dominant endemic tree, Juniperus brevifolia   combined with the Latin verb colo (to live in).

Description. Male holotype (from Flores). Total length 2.7. Prosoma 1.3 long, 1.1 wide. All eyes except AME equal in size, large, AME small, posterior row slightly recurved, anterior row recurved. PME separated by less than half their diameter, separated from PLE by half their diameter. PLE touching ALE. ALE separated from AME by half the diameter of the former. AME separated by half their diameter. AME separated from PME by the diameter of the latter. Clypeus height ca. 2.5 times an AME diameter. Chelicerae with 40 to 50 stridulatory striae, 3 promarginal teeth and 6 retromarginal denticles. Prosoma yellow. Sternum anteriorly truncated, roughly triangular, darkened. Opisthosoma whitish with a black longitudinal band in the cardiac area and with posterior black chevrons ( Fig. 25 View FIGURES 23 – 28. 23 – 24 ), ventrally black. Legs with a prolateral spine in femur I; all patellae with 1 dorsal spine; 2 dorsal, 1 prolateral and 1 retrolateral spine in tibia I, 2 dorsal and 1 retrolateral spine in tibia II and 2 dorsal spines in tibiae III and IV; 1 dorsal, 1 prolateral and 1 retrolateral spine in all metatarsi. TmI 0.2. TmIV absent. L Sp Ti I 2.7, L Sp Ti IV 3.8. Overall color yellow, with black annulations in femora and tibiae near the joints. Palp ( Figs. 9–12 View FIGURES 9 – 15 ). Patella with 1 dorsal spine, roughly as long as diameter of patella. Tibia as long as wide, with 1 dorsal spine, twice the diameter of tibia. Tibial spine roughly twice the length of patellar spine. Cymbium with a retrolateral keel. Paracymbium simple, with a distal keel, resultant from the merged anterior and apical pockets, with 4 to 6 hairs in its basal part. Suprategular apophysis a wide tooth, with a sclerotized dorsal arch above the large opening of the column. Lamella characteristica wide, terminally pointed. Terminal apophysis with a small ventral branch and a large dorsal branch, terminally pointed. Radix base widely rounded, without a pointed tail. Median membrane laminar. Embolus with a lobed thumb extending retrolaterally, anteriorly and dorsally. Fickert’s gland absent.

Eyes same as in males except the distance of PME, separated by half their diameter. Clypeus height ca. 3.5 times an AME diameter. Chelicerae with 30 to 40 stridulatory striae, 3 promarginal teeth and 7 retromarginal denticles. Prosoma yellowish to brown. Sternum as in male. Opisthosoma with a dorsal reticulate pattern of black patches interspersed with whitish areas, ventrally black ( Fig. 26 View FIGURES 23 – 28. 23 – 24 ).

Leg spination same as in male. TmI 0.2. TmIV absent. Overall color yellowish to brown, with black annulations in femora and tibiae near the joints.

Epigynum (13–15). Scape sigmoid, with short proximal part, as long as wide, somewhat angular, with a total reduction or merging of the median part of the scape, distal part ending into rounded sclerotized lateral lobes on each side. Stretcher wide, with a large pit. Posterior median plate protruding in ventral view, heart-shaped in dorsal view. Entrance grooves coiled, ascending from the distal part of scape to the proximal part of scape into a coil, then proceeding in posterior direction to the oval receptacula.

Natural history. This species is yet to be collected by direct hand sampling, having appeared solely through the use of pitfall trapping. Although several sites in Flores Island were sampled covering a wide area in the two main native forest areas and other habitat types spread through the island, the site where this species occurs is a small native forest fragment and the only one sampled in this island devoid of abundant Sphagnum   mosses covering the ground. In this small patch of Juniperus brevifolia   dominated forest, the ground has few or little herbaceous cover, due to a closed canopy. We can safely assume that C. junipericola   builds its webs on the ground layer of the shady J. brevifolia   forest. In other sites with J. brevifolia   cover but no extensive shade or with abundant moss cover, C. junipericola   is yet to be found. Adults were collected solely in June and July. 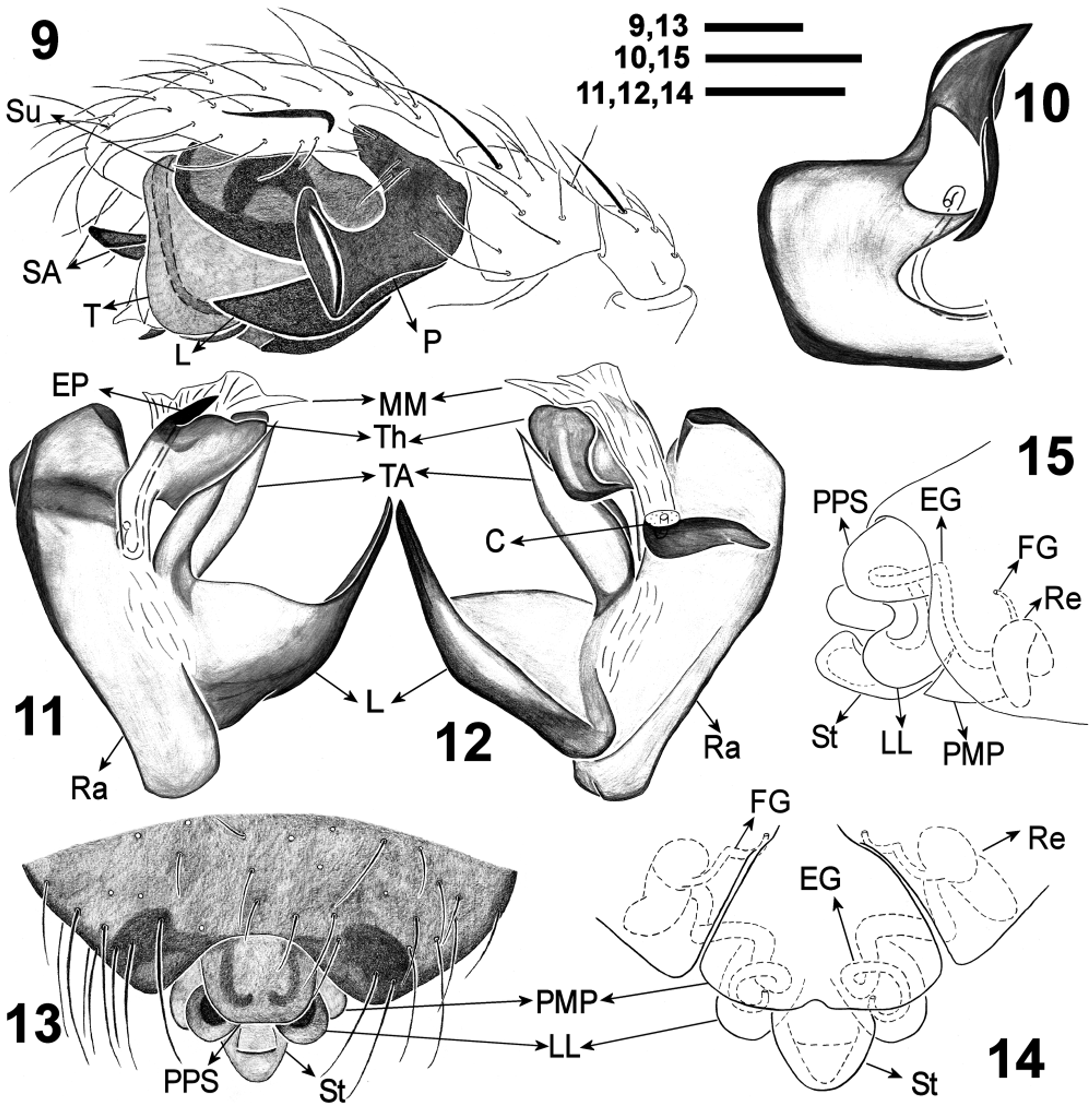