Opuntia caboensis   is similar to O. comonduensis   from the eastern mountains and coasts of Baja California Sur, but has smaller cladodes and more velvety tomentose texture; moreover, shorter and fewer spines, these located in the upper third of the pads, or almost absent, also it is diploid versus tetraploid.

Etymology: —The specific epithet is derived from the toponym “Región de Los Cabos” referring to the Cape region, the extreme southern extent of the Baja California peninsula. In turn, the epithet “Cabos” is also related to the two main towns in the area, Cabo San Lucas and San José del Cabo.

Distribution and habitat: —It should be noted that both of these new species overlap in their distributions in the Cape region’s mountains, specifically in the northern portion, an area called the Sierra de La Victoria (23.602°N). Both species are less common in the Cape’s southern mountains (Sierra San Lázaro, 23.252°N). However, in the eastern portion (slopes toward the Gulf of California) both species populations are more common than in the western slopes of the Pacific, where they are infrequent (see Figure 1 View FIGURE 1 ).

Opuntia sierralagunensis   occurs in dry tropical forest, from 400 m in elevation, to the limits with the oak woodland at about 1400 m. Regarding O. caboensis   , it can be found most commonly between (10–) 100–1100 m in elevation. Both of these new species appear to have healthy populations in the elevation belt where they come into contact with the lowest oaks ( Quercus spp.   ), around 700–900 m in the Sierra La Victoria. Apparently, the incidence of winter frosts restricts their distribution to higher elevations, although a sole plant of O. sierralagunensis   was seen growing underneath pine trees at 1600 m. Also, the populations along the coastal strip are uncommon, however most of the herbarium specimens historically came from it.

Phenology: —The shrubby spreading habit of some O. sierralagunensis   individuals might be attributed to the impacts of forage pressure from cattle that graze freely in the region, since some plants that were out of reach from cattle tended to have more erect growth habits and were taller, reaching up to 2 m. Although O. caboensis   has a low number of spines, the areoles do have abundant glochids that might possibly act as a deterrent against some livestock grazing ( Fig. 5 A, B View FIGURE 5 ).

For both species, flowering episode begins during the early spring (March), pollination seems to occur by native bees ( Augochloropsis sp.   , and Diadasia sp.   ) that are common visitors during mid-day, as well as Nitidulidae   and Cantharidae   beetles, and several ant species. Flowering ends during the dry and warm summer, when the water stress in the cladodes is noticeable. When the summer rains arrive (August-September), the plants rehydrate quickly and the fruits reach the last stage. In O. sierralagunensis   the fruits ripen when they change their color from green to red ( Fig. 3F View FIGURE 3 ), they are promptly consumed by birds and other fauna. For O. caboensis   , the ever-green fruits show a noticeably low rate of setting and take more time to ripen, since they remain on the cladodes until winter or even into spring ( Fig. 5F View FIGURE 5 ). In both cases, the seeds have a viability greater than 50%, but the majority of propagation for both species appears to be vegetative and occurs mainly from the detachment and rooting of the stem cladodes.

Also, for both species, the development of new stem cladodes occurs from the spring months and continues until the onset of summer rains. The flowers develop on these new pads the following spring, new pads sprout mostly from 2–3 year old pads. Some immature pads are heavily attacked by herbivorous insects (such as Moneilema sp.   ) and others, possibly due to their soft texture and lack of any apparent structural defenses. The extreme results are deformities in the growth of these cladodes, and an eventual lack of vegetative growth. Due to the presence of cochineal ( Dactylopius opuntiae Cockerell   ) colonies on some O. caboensis   pads ( Fig. 5 B View FIGURE 5 ), there might be additional impacts that affect fitness and growth of these individuals.

Finally, in respect to another important diagnostic character found in O. caboensis   , when water stress begins during the dry season (in May), red spots develop and spread from each areole to cover wide strips on the surface of the cladodes, sometimes all of them ( Fig 5A View FIGURE 5 ). This species shares this character with the partially sympatric O. bravoana   , which has caused misidentifications by novice botanists. Table 1 shows additional taxonomical traits to take in account to separate them.

Conservation status: —Considering their irregular distributions in the tropical deciduous forest portions of the mountains of the Cape region, the relative low density of individuals in populations, as well as the herbivory pressure from cattle throughout their ranges, both O. sierralagunensis   and O. caboensis   could likely be considered as threatened or vulnerable species. Population studies should be conducted on both of these new species following IUCN and Mexican regulatory protocols in order to assess and categorize them accurately. 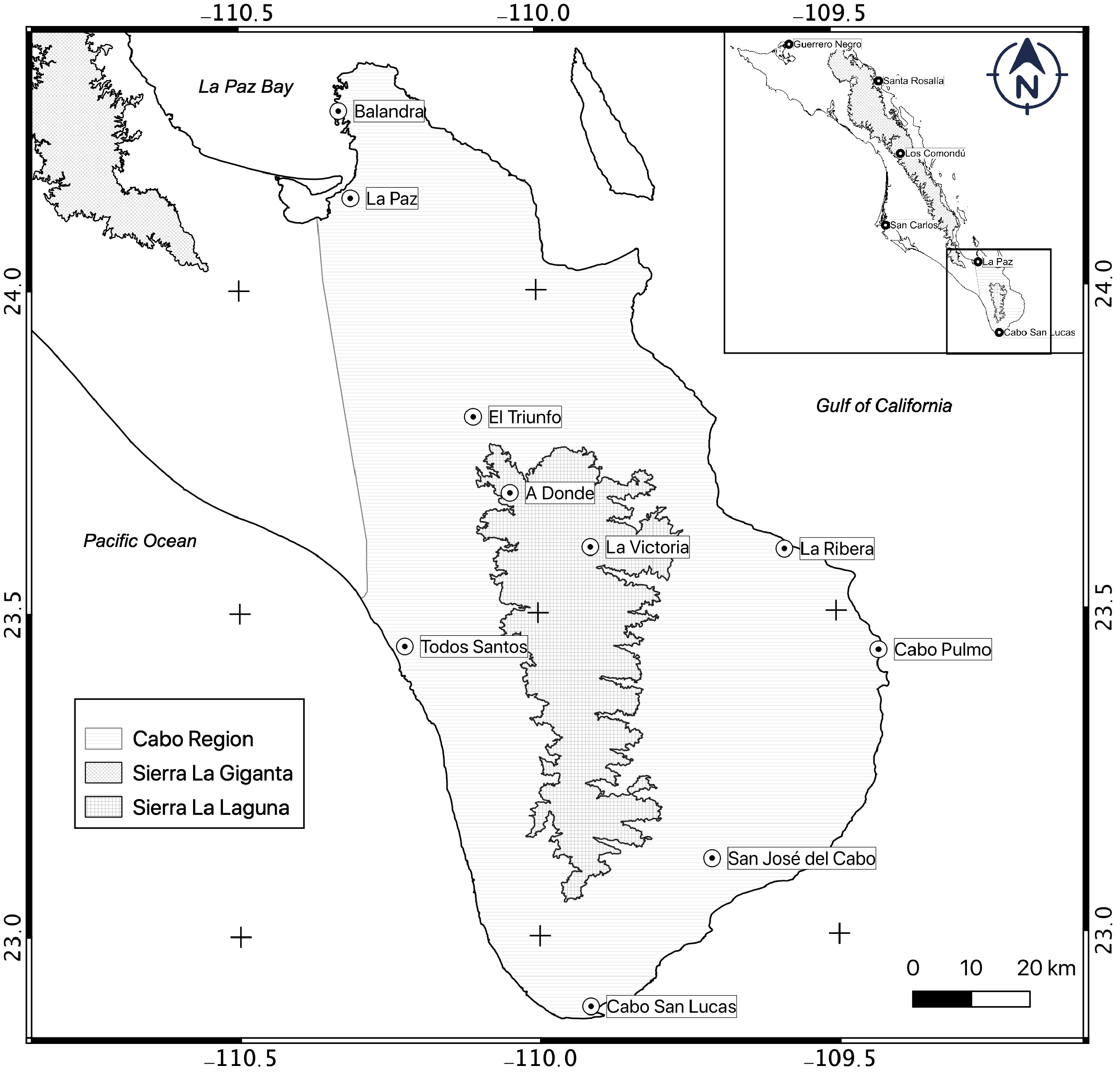 FIGURE 1. Geographical location of the study site. The Cape Region is the southernmost portion of the Baja California Peninsula in the state of Baja California Sur. The light gray area shows the mountainous terrain occupied mainly by the dry tropical forest and woodlands. Squares and circles show the location of collecting sites and observations for each new species, as well their respective type localities. Towns and ranges are cited in the text. 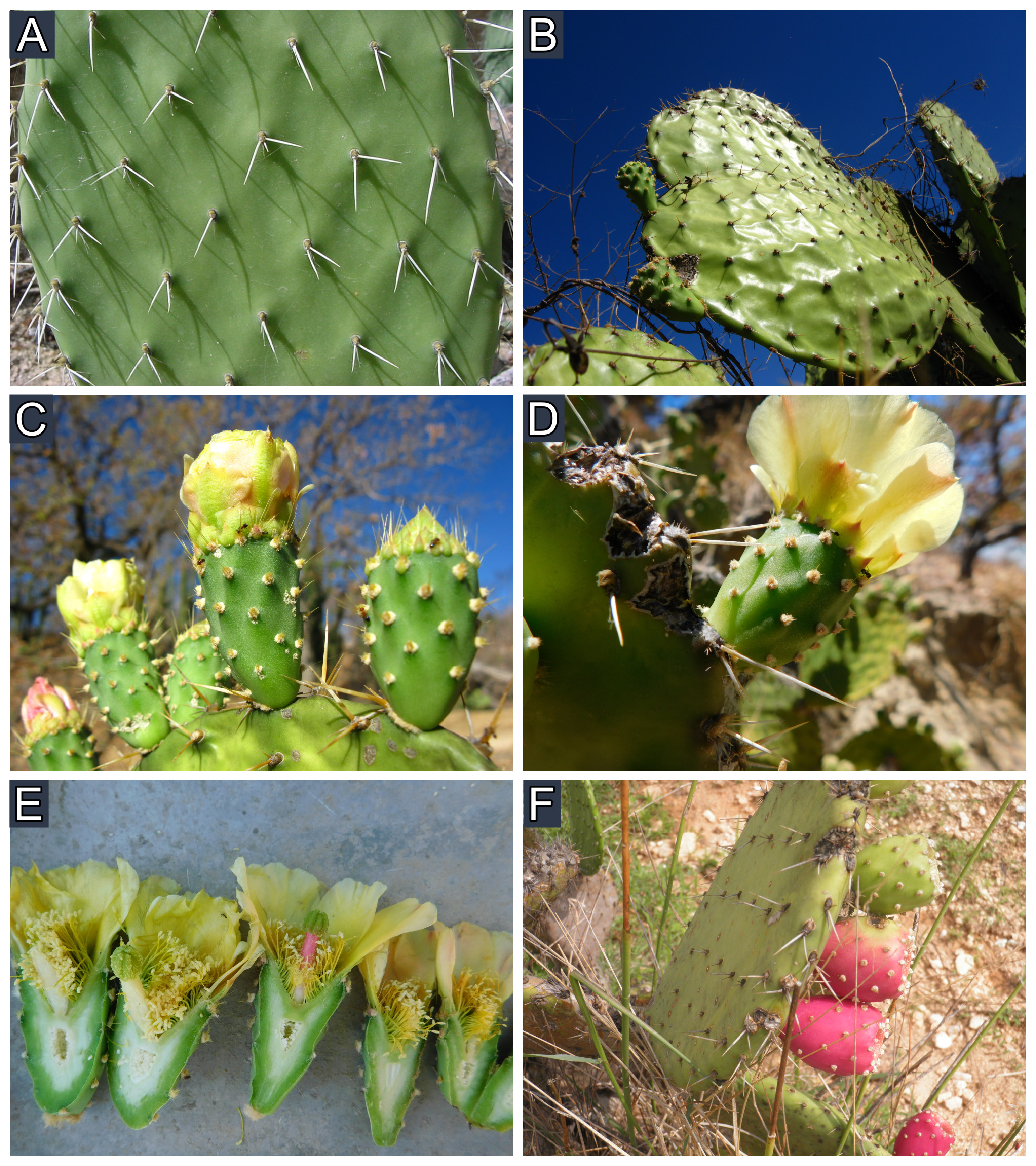 FIGURE 3. Opuntia sierralagunensis sp. nov. A. Spine pattern in a mature cladode; B. Lustrous condition of the cladodes; C. Pericarpel with floral buds, note long setaceous glochids in the upper areoles; D. Flower showing yellow tepals, with red to pink spots at tips: E. Flower longitudinally cut, there are two color morphs of the styles, white and red; F. Fruits in the transition from immature (green) to mature (red). FIGURE 4. Opuntia caboensis sp. nov. A. Growth habit of the plant, and details of cladode shape and spine pattern, flower, and fruits. B. Detail of epidermis with delicate trichomes in the epidermis that give a velvety texture, and a young areole. C. Detail of a flower cut longitudinally, showing the pistil and stamen arrangement. D. Longitudinal cross-section of a ripe fruit showing receptacle and seed density. E. Detail of young areole with glochids and two emerging spines. FIGURE 5. Opuntia caboensis sp. nov. A. Cladodes with red spots when stressed during the dry season; B. Cladode with few spines only in the upper third, and the presence of cochineal. Note also the velvety stem surface; C. Pericarpelar view; D. Flower view; E. Longitudinal cut of the flower, note greenish to yellowish color of the pistil; F. Mature fruit after ca. 8 months of development.