Muddy patches in a dry streamlet in a rain forest remnant. The mud was moist at the time of collecting; during wet season standing or running water might be present. Material collected on 15.08.2001 by CEFR and RLP.

Holotype: an ovigerous, dissected female, with valves stored dry in a micropalaeontological slide and dissected soft parts kept in a sealed slide ( MZUSP 15041).

Botocudos is the designation of several South American Indian tribes that use a device to enlarge the lower lip. The present species is characterized by the fact that the LV forms an enlarged anterior ‘lip’, greatly overlapping the RV.

RV in lateral (internal) view with caudal margin asymmetrically twisted, ventrally everted towards the median rather than dorsal side, anterior margin everted towards the ventral side; postero-ventral keel short and rounded, situated rather posteriorly, ms large, situated nearer the anterior side, consisting of c. 8 scars arranged in a rosette.

Both valves with an internal rim along the anterior margin (= calcified inner margin?); in LV this rim seals the closure of the carapace when overlapping the RV.

A1 ( Fig. 1A View Figure 1 ). First segment stout with dorsal seta, the second with 2 unequal ventral setae (one c. 2.5 times as long as the other); third segment with 1 ventral and 1 dorsal setae (s 1); fourth segment with 1 dorsal seta (s 2) and small alpha-seta; fifth podomere bearing 4 apical setae, 2 subequal, ventral setae (with an alpha-seta near their insertion) and 2 longer ones in dorsal position; last podomere with subapical aesthetasc, 2 long apical setae, the ventral seta about half as long as the dorsal, and a dorso-apical ‘alpha’ seta.

A2 ( Fig. 1B View Figure 1 ). Protopodite two-segmented, first segment with 2 setae and dorsal hook (h), second segment with long seta. Exopodite (exo) with long, apical seta and short, lateral conical spine. Endopodite three-segmented; first podomere with ventral aesthetasc clump (Ac) in proximal position and 2 setae on the expanded ventro-apical corner; second podomere with 2 ventral aesthetascs (y 1 and y 2) and short, claw-like ventro-apical seta (t), subapical seta (z) and 4 distal claws: 2 long, 1 intermediate and 1 short (x); third endopodite short and slender, with one ventral aesthetasc (y 3) and 2 apical claws, one short and about half the length of the second one, the latter reaching beyond the tips of the long claws of the penultimate segment.

Mx (not illustrated). Palp two-segmented; proximal segment with an external, subapical seta, 3 terminal setae (2 straight and 1 curved, the latter shorter and plumose), and 2 short setae inserted on either side of the terminal segment; terminal segment small, with 1 thin median seta and 2 subequal, stout setae set with a double row of setulae.

T2 (not illustrated). Protopodite one-segmented, rather stout, with 3 ventral setae, 1 short proximal and 2 long, unequal distal ones. Endopodite four-segmented; first segment with 2 unequal ventro-apical setae and 1 long seta, slightly exceeding the tip of the next segment; second and third segment with 1 stout ventro-apical seta each; terminal segment short, with 1 strong apical claw, flanked by 2 subapical claws, the ventral longer than the dorsal one.

T3 (not illustrated). Protopodite one-segmented, short, with 2 unequal ventro-apical setae. Endopodite four-jointed; first segment with 1 distal seta approximately as long as the segment itself; second and third segments bearing 1 apical seta each, reaching beyond the tip of the next segment; fourth segment with a long, curved apical claw and 2 subapical setae, the ventral longer than the dorsal one.

Thus far, the species is known from its type locality only, where it occurs on patches of moist mud in a remnant of the Atlantic Forest in south-eastern Brazil.

This species is at once recognizable by its unique combination of valve and soft part characters, namely short anterior tooth on the LV and the short keel on the RV, typical of the pagliolii   -lineage, and the postabdomen with seta, thus far only found in a representative of the danielopoli -lineage. The large anterior LV> RV overlap is unique amongst extant Darwinulidae   . 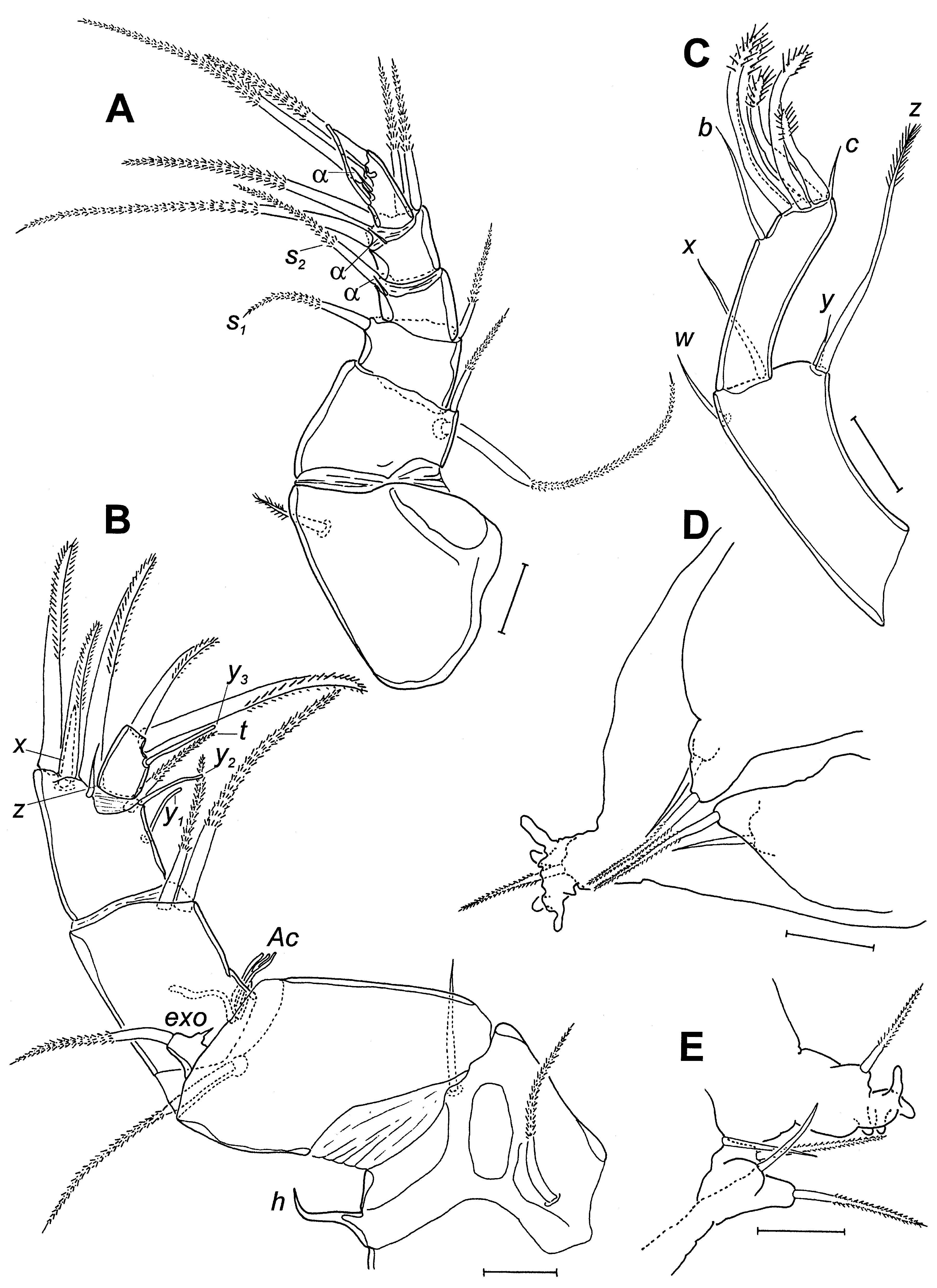 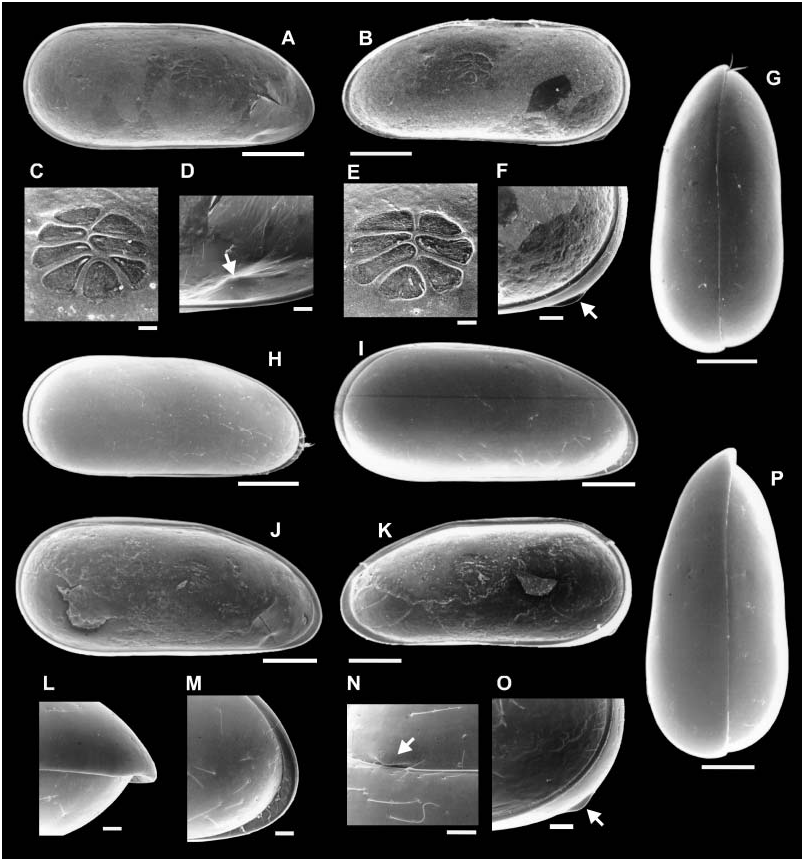