Male genitalia ( Figs. 7 ‐ 9 View Figs ). Sternite 9 produced into wide, shallowly bilobed subgenital plate. Tergite 10 central sclerite curved downwards at half length to fit neatly between arms of epiproct base. Medially on rounded hind margin of tergite 10 is a minute cone shaped posterior sclerite. Arms of epiproct curve down and posteriorly, then join and curve upwards and posteriorly, terminating in a downcurved sharp tip. Paraprocts large, about as long as cerci, broadly falcate, inner face from base to about half length forms a triangular membranous sheet. Membranous penis inside sternite 9, visible only in cleared specimens. The everted penis appears relatively dark, apparently through tissue pushed into it by body fluid pressure. It is a large pointed cone slightly curved up between the paraproct bases, lying below the epiproct hook and is partly divided longitudinally by a lateral fold ( Fig. 9 View Figs ). A tiny gonopore apparently at tip of slightly longer anterior part. A small triangular wing embracing base of paraproct observed only on the left side of body of the single specimen with everted penis.

Pronotum subrectangular, wider than long; hind margins of mesonotum and metanotum convex. Thoracic tergites with relief of grooves and ridges whose outlines are difficult to define precisely because of rough matt surface and best seen in side view ( Fig. 12 View Figs ). A raised cone near base of wingpad on meso ‐ and metanotum.

Remarks. The genus is named for the first locality from which the species was recorded. This species is dedicated to Carol and Oliver Flint who not only collected the types but also were responsible for collecting a sizeable portion of all the material we examined.

A young wingless larva of this species was illustrated and briefly described by Illies (1963), as “Larventyp X ( Teutoperla   n. gen.?)”. The general shape, the spinose, dorsally raised femora (Illies’ text refers to ‘tibiae’ by mistake but his figure is correct), the pointed tergite 10, the long triangular paraprocts, the narrow maxilla and its 4 ‐ segmented palpi clearly indicate the conspecificity of his specimens with ours. Our interpretation is also confirmed by specimens in the Illies collection. The larva of this species was verified by dissection of a mature male larva.

Illies (1963) found the larvae in moss at the bottom of streams or on rocks. The present material additionally suggests that the larvae dwell in or at least near waterfalls. The exceptional shape of head capsule and mouthparts suggested some special food, but the fore ‐ gut of a single penultimate instar larva (from Neuquen Cascades) was filled with fine particulate matter, including many small diatom valves, fungal hyphae and spores, fragments of macrophyte tissue with tracheae, fine mineral particles, but no recognisable animal remains. The larva appears to be a gatherer, possibly obtaining its food from special microsites. 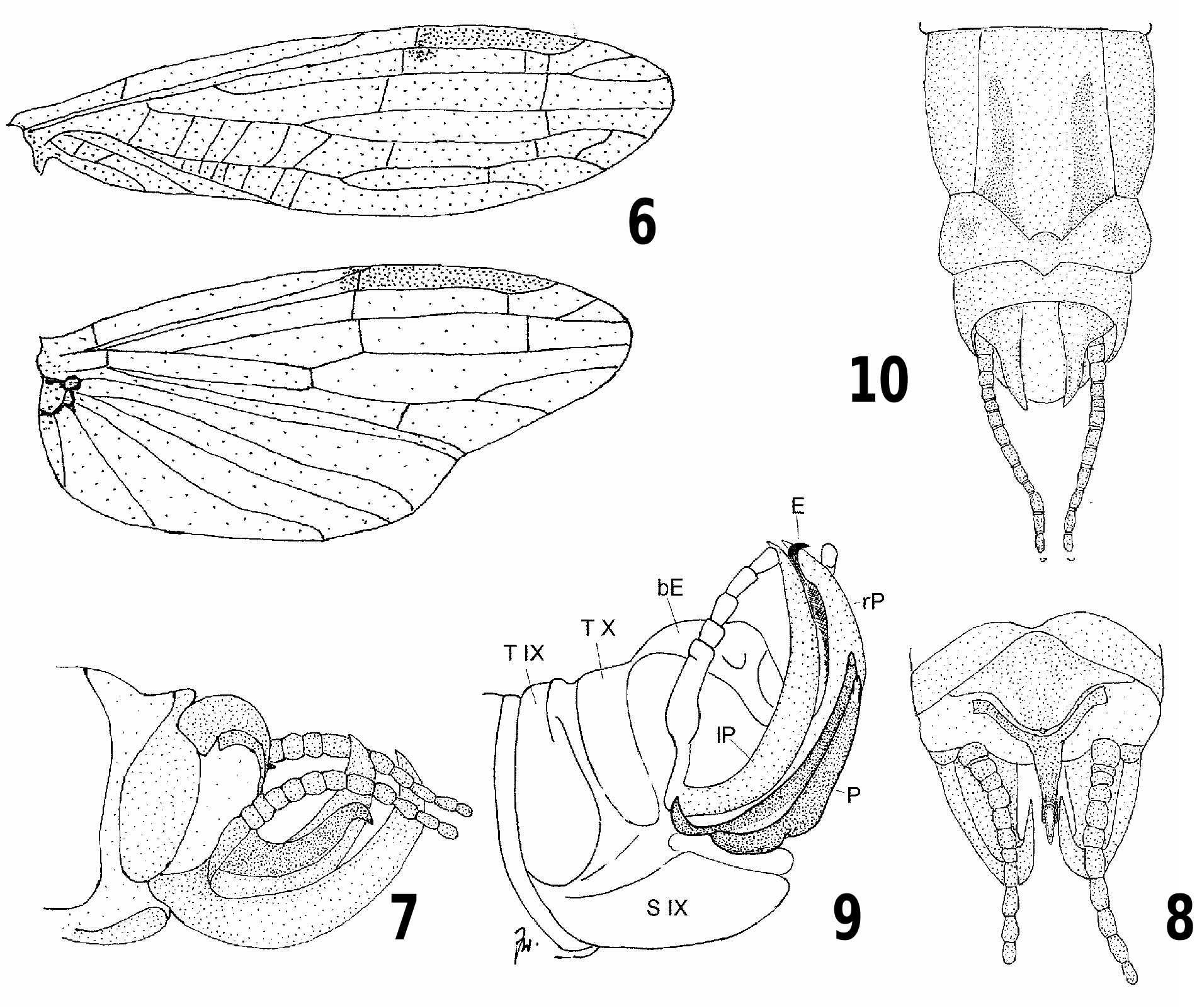 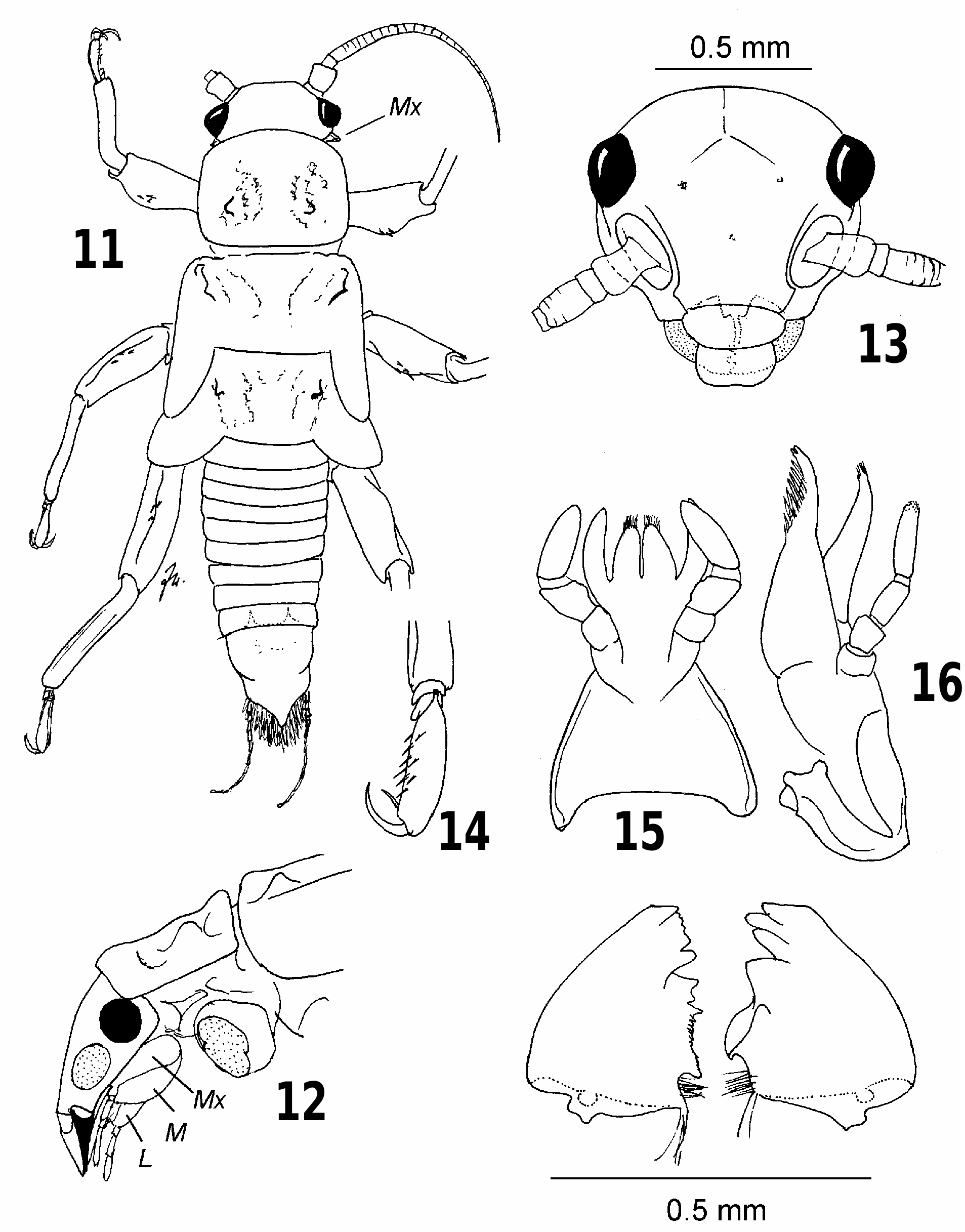