Diagnosis. The new species is similar to P. elegans Brunner v.W., 1878 in external appearance. Striking differences are the possession of two distinct steps on the stridulatory file of P. elegans which are lacking in P. albolineatus . Accordingly the calling song differs between both species with regard to syllable structure and repetition rate. Slight differences were also found in external morphology: The fastigium verticis is narrower in P. albolineatus ; index scapus: fastigium verticis = 1.1–1.5 (mean 1.26) in male and 1.0– 1.5 (mean 1.20) in female of P. elegans and 1.3–2.1 (mean 1.55) in male and 1.3–1.6 (mean 1.43) in female of P. albolineatus . The female subgenital plate is acute triangular in P. elegans and transverse triangular in P. albolineatus . Coloration is less extended in P. elegans than in the new species.

Coloration. Male. Green with black stipples. Pronotum with a narrow white median line and with white lateral bands bordered medially in metazona by a red cuneate spot, paranota with a broad white band along ventral margin. Tegmina yellow, stridulatory area with speculum of discus (between cu 1 b and cu 2, sometimes also between cu 1 a and cu 1 b) and a spot at the hind margin black or dark brown. Abdominal tergites green with white lateral bands bordered externally by a black line and with a median black or dark green band, interrupted by a white or light green line. Colour pattern less distinct or lacking on apical tergites.

Female. Green with black stipples. Pronotum as in male. Tegmina yellow with a black dot at hind margin. Abdominal tergites with a median and 2 lateral white bands, the lateral band bordered externally by a narrow black line; the median band can be light green instead of white. Colour pattern less distinct or lacking on apical tergites.

Distribution. Only specimens from the Dinaric range in Montenegro and Bosna-Herzegovina can be assigned with certainty to the new species. However, the taxonomic status of several populations from the coastal regions of Croatia and Montenegro (as preserved in the Naturhistorisches Museum Wien and other collections) cannot be settled without extensive investigations of the stridulatory behaviour. It might thus prove that the new species covers a wider range.

Stridulation ( Fig. 16 View FIGURE 16 B): Stridulation is a syllable train, but the males switch from time to time from repeating syllables of a type A to repeating those of a type B and reverse: Syllables of type A are repeated for a longer period (15–16 s). They consist of 3 elements. A bulk of dense pulses with slightly increasing intensity is immediately followed by a bulk of dense pulses of decreasing intensity (second row in Fig. 16 View FIGURE 16 B). A single pulse is added. Syllable repetition rate is about 6 syllables per second (at 27 °C). Syllables of type B were then repeated for about 5 s. They consist of 3–5 separate pulses. Syllable repetition rate is about 5 syllables per second. After this, males switch back to repeat syllables of type A and so on. Stridulation is mainly in the ultrasonic range. Maximum recording intensity using an ultrasonic detector as microphone was at about 40 kHz. Males were singing in the afternoon and evening.

The switch between two different syllable types also occurs in the song of P. elegans . The syllable structure of both syllable types and the repetition rates however differ between both species. Stridulation of P. albolineatus also does not agree with the song described by Heller (1988) under P. e l e g a n s from a male from near Kotor. It is thus not impossible that more sibling species of the P. elegans group occur on the Balkan Peninsula. 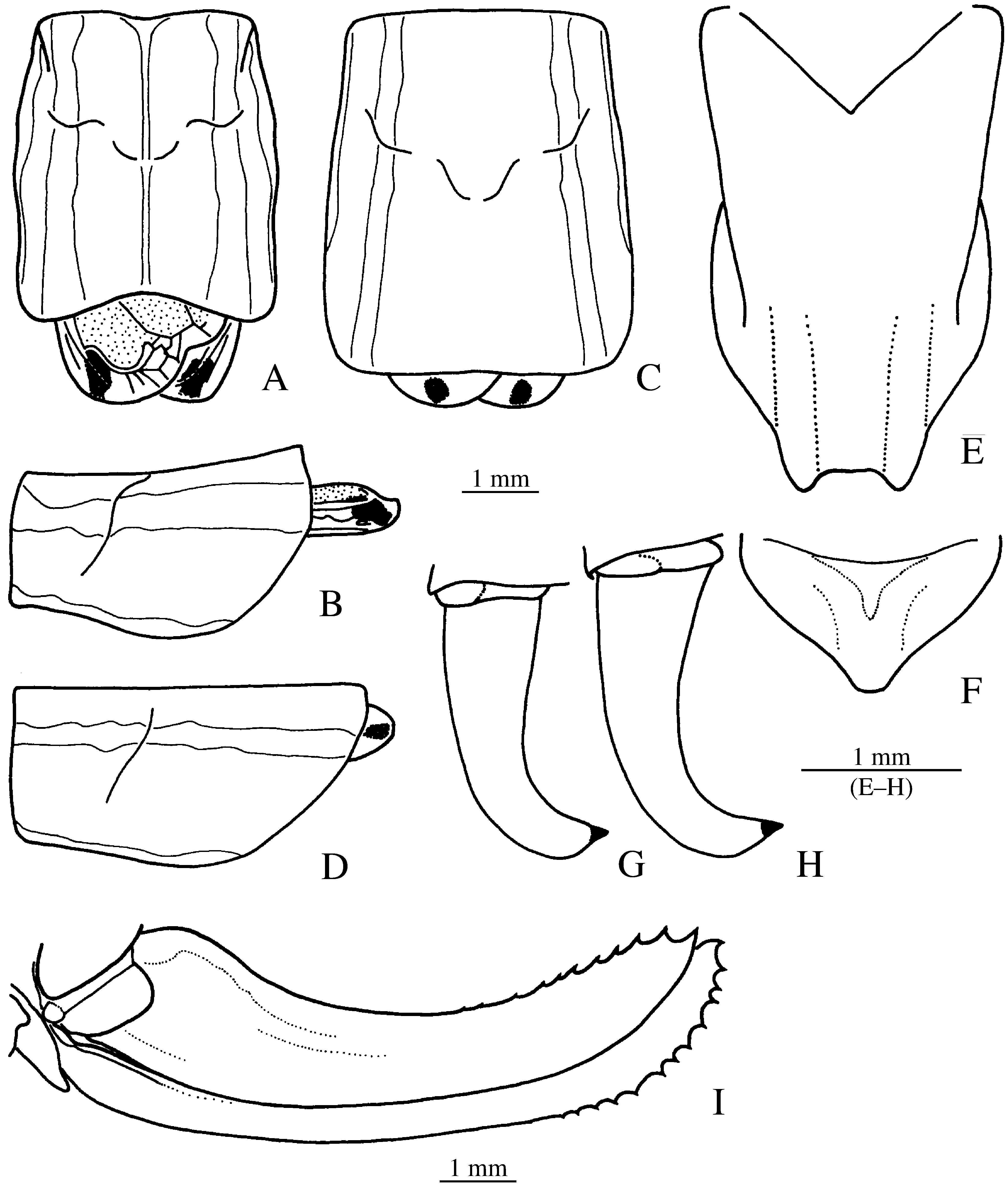 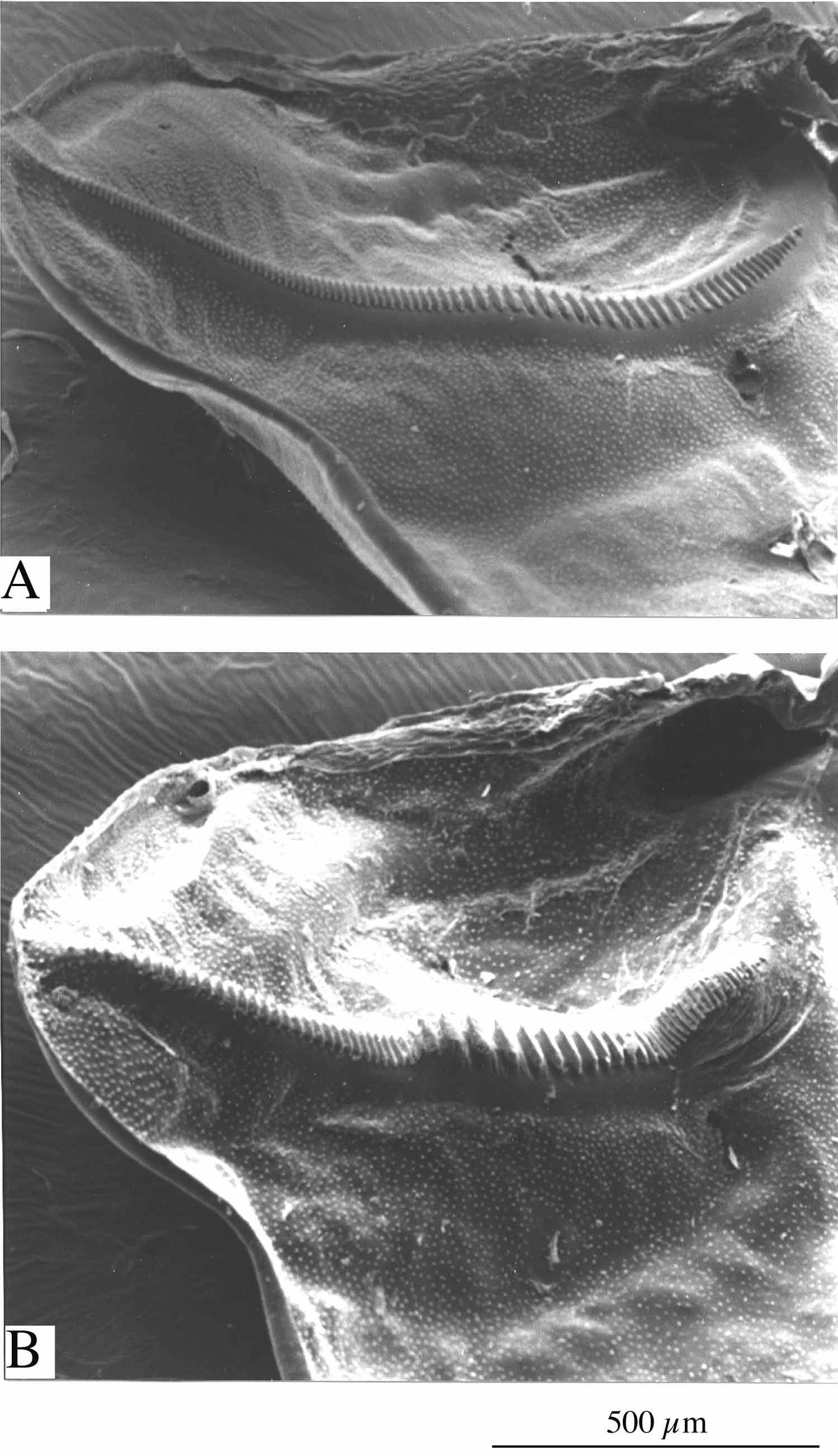 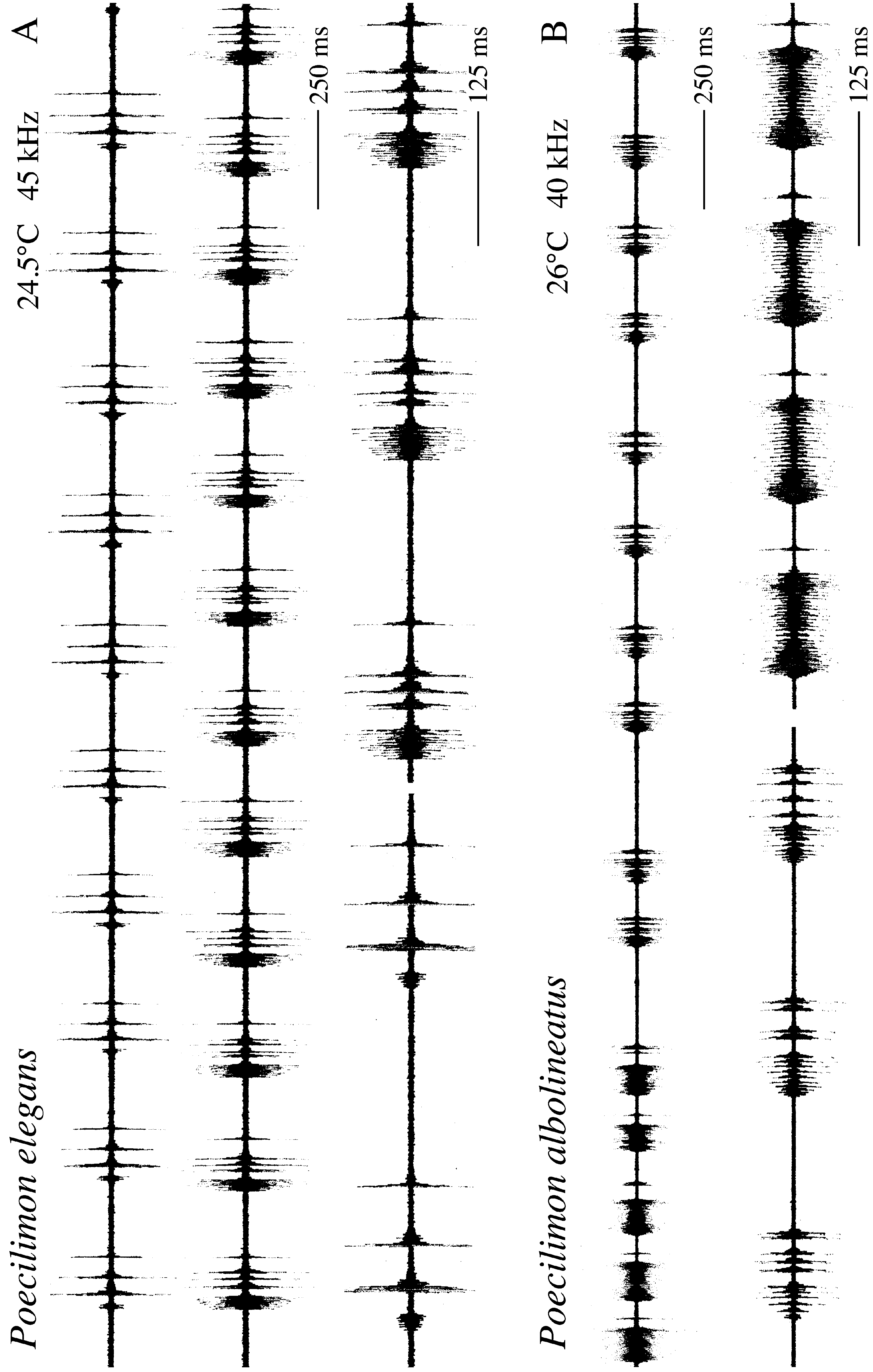