Remarks. This small Euchone   species has several distinctive features that differentiate it from congeners: the presence of a low basal membrane, a posterior peristomial ring collar with a midventral incision, inferior thoracic chaetae of type B, about 18–19 abdominal chaetigers with a pre-pygidial depression in the posteriormost 7–8 chaetigers, provided with raised lateral flanges, and the pygidium bears a pygidial cirrus ( Table 2). The most similar species is Euchone variabilis Hutchings & Murray, 1984   , a species common in southeastern Australia, as both species share the same type of inferior thoracic chaetae (type B), greater than seven chaetigers forming the pre-pygidial depression, raised flanges around the pre-pygidial depression, and the presence of an incipient pygidial cirrus ( Table 2, Fig. 6 View FIGURE 6 F). However, the basal membrane is much shorter the new species (about one tenth of the length of the crown compared to 1 / 4 – 3 / 4 of the length of radioles in E. variabilis   ), the shape of the collar differs (entire in E. variabilis   and with a midventral incision in these specimens) and the morphology of the prepygidial anterior flanges is also different (with two triangular flaps on either side of a U-shaped anterior medial gap in E. variabilis   , which are absent in these specimens). The staining pattern with methyl blue/green also differs between the two species – the flanged area in Euchone variabilis   stains uniformly blue ( Wong et al. 2014), whereas this species displays a single strong glandular band per segment, even on the raised flanges. Other species showing similar features such as eight or more chaetigers occupying the pre-pygidial depression as well as type B inferior thoracic notochaetae include E. cochranae   , E. heterochaetosa   , E. pallida   and E. danieloi   n. sp ( Table 2). The new species differs from all these by the presence of an incised ventral collar margin (as compared with E. cochranae   and E. danieloi   n. sp.), the presence of high flanges around the pre-pygidial depression (as compared with the low short rim reported in E. pallida   ) and the lack of elongate flaps on either side of the anterior margin of the flanged depression (as compared with their presence reported for E. heterochaeta   and E. variabilis   ) ( Rullier 1972, Hutchings & Murray 1984, Fitzhugh 2002). Some other characters differentiating the species are shown in Table 2.

Etymology. This species is dedicated to Glenn Ferguson, for his support and encouragement for one of us (AM), over many years. 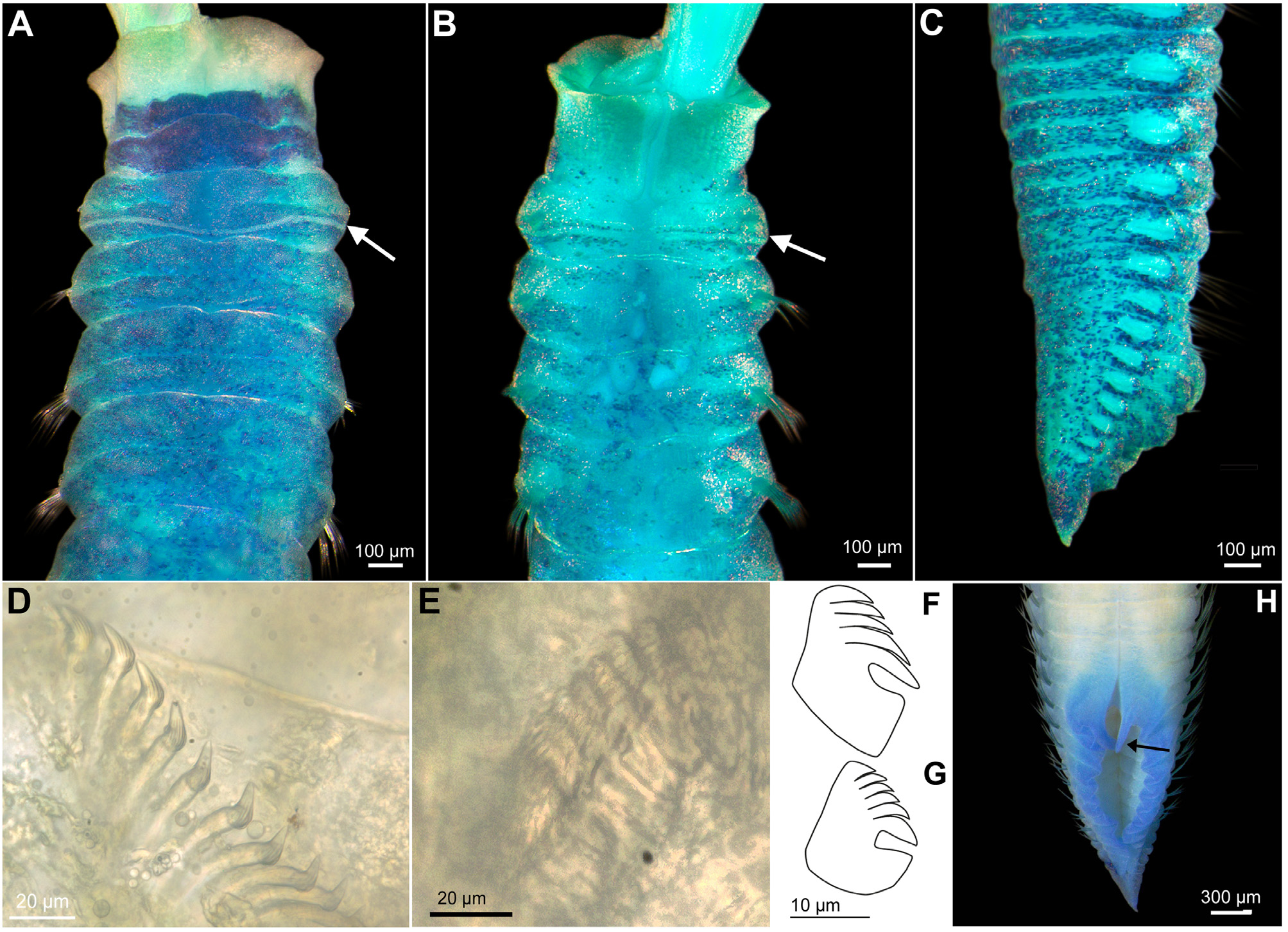