Meidiama schockaerti  : species of Meidiama  with a straight stylet of about 65-Mm long, accompanied by 18–20 needles of 60 Mm, without hook; 9–10 testes in a row.

Meidiama schockaerti  : holotype ( SMNH 7351View Materials; whole mount)  Description: The animals are very long and slender: adults of M. lutheri  are around 4-mm long; adults of M. schockaerti  are 2–3-mm long and adults of M. uruguyaensis  are around 6-mm long (all measured on the whole mounts), with some anterior sensory bristles. Adhesive papillae were not seen in the whole mounts, nor in the sections, but are present in the caudal region of M. lutheri  , according to Marcus (1946). The brain is encapsulated, and there is a clear extension of the gut over the brain. The pharynx is directed ventrally, is slightly lobate, and is roughly in the middle of the body ( Fig. 1View Figure 1). The epidermis is 1.5–2-Mm thick in M. lutheri  , and the cilia are 3-Mm long dorsally and 4-Mm long ventrally; in M. uruguayensis  the epidermis is 1–1.5-Mm thick, and the cilia are 2 and 3-Mm long, respectively.

The ovaries are just in front of the pharynx, and the vitellarian follicles are all behind the pharynx, extending over around two-thirds of the postpharyngeal body part. Behind the last, most posterior follicle, the two ovovitelloducts join to form the common female duct. Slightly more posteriorly, this duct enlarges to form the copulatory bursa, in which a short vagina opens ( Figs 1View Figure 1, 2View Figure 2). The female duct continues over a considerable distance (about 0.25 mm) to reach the female pore. From here departs a short genito-intestinal duct, which opens into a large resorbing bursa in the intestine. A connection with the gut is not seen, although some clusters of sperm are observed in the gut at the level of, and even anterior to, the copulatory organ. Very large cement glands run to the female pore, with the gland bodies lying mainly in the most caudal body part. The whole female duct is lined by a rather dense and nucleated epithelium, and is surrounded by spiral muscles. The epithelium is slightly higher in the copulatory bursa and in the most anterior part of the female duct. The muscle layer around the copulatory bursa is also slightly stronger than on the rest of the duct. The epithelium of the ovovitelloducts is very thin and sinuous, and no evidence of a resorbing function was seen.

There are about 50 testes in M. uruguayensis  (close to 100 in M. lutheri  , according to Marcus 1946: fig. 120), roughly arranged in two rows, and with the first testis found at one-third of the prepharyngeal region, and with the last testes just in front of the ovaries. In M. schockaerti  there are only 9–10 testes in a row. The copulatory organ, just in front of the female pore, is directed forwards. It consists of a pair of spherical seminal vesicles, from which long narrow ducts depart ( Fig. 3View Figure 3). These ducts join to form a single seminal duct, which enters the prostate vesicle at its proximal pole. The seminal vesicles and the ducts are all surrounded by a strong spiral muscle layer. The prostate vesicle tapers anteriorly, where the stylet is attached, and is recurved over 180°, with both proximal and distal poles directed forwards. The seminal duct can clearly be seen in the centre of the vesicle, with its epithelium forming the prostate glands, the nucleated gland bodies of which are outside and inside the vesicle. In the large male atrium, the curved stylet and the atrial needles are found. The needles are situated in the distal half of the atrium, and are arranged in a half-open girdle, closed at the dorsal side (above the stylet), and open at the ventral side. The prostate vesicle is surrounded by very strong, spirally arranged muscles, which continue over the male atrium, and seem to be attached to the needles. A moderately strong sphincter surrounds the male pore.

In both individuals of M. lutheri  , the curved stylet is about 60-Mm long, the needles are 28–30-Mm long, and are also slightly curved. The funnel-like proximal end of the stylet has an opening of 7–8 Mm in diameter, with a strongly thickened wall, whereas the stylet diameter tapers from 5 Mm proximally to 2 Mm distally. The curvature of the very distal end is stronger than in the middle of the stylet, making a precise measurement difficult, as the entire length of the stylets in the whole mounts cannot be seen in the same plane. The terminal opening is oblique and tapering proximally. We counted nine needles, whereas Martens & Curini-Galletti (1993) counted ten, and Marcus (1946) mentions 12. Needles lying above each other are indeed often difficult to discern. Each needle ends in a slender ‘hook’, about one-third of the total length of the needle in the shortest needles, and about one-quarter of the total length in the longest needles.

In M. uruguayensis  the stylet is also curved, and is about 90-Mm long in the holotype. At the distal opening it bears a variably ornamented ‘wing’ ( Fig. 4View Figure 4, inset). The obliquely-placed proximal opening, also with a strongly thickened wall, has a diameter of 20 Mm, and the stylet has a diameter of slightly less than 5 Mm distally. There are about 18 needles, which are 31–37-Mm long, with the shortest needle located in the middle of the circle. The terminal ‘hooks’ have a strongly curved tip, and are a little less than between one-fifth and one-quarter of the total length of the needles. The length of the stylet varies from 76 to 90 Mm (n = 7, mean = 84 Mm); the shortest needles are 26–46-Mm long (n = 6, mean = 32 Mm), and the longest needles are 35–69-Mm long (n = 6, mean = 44 Mm). The individuals with the longest stylet also have the largest needles.

The copulatory organ of M. schockaerti  deviates in a number of aspects from that of the other two species. The stylet is straight, close to 65-Mm long, and gradually narrows from 10-Mm wide at the proximal opening (without obvious thickening) to about 3-Mm wide distally. The needles are about 60-Mm long, and are without a terminal ‘hook’. We counted about 18 needles, whereas Martens & Curini-Galletti (1993) depicted 21 needles in a regular arrangement around the stylet. We have the strong impression that the needles are concentrated at one side of the stylet, as in the other species of Meidiama  . 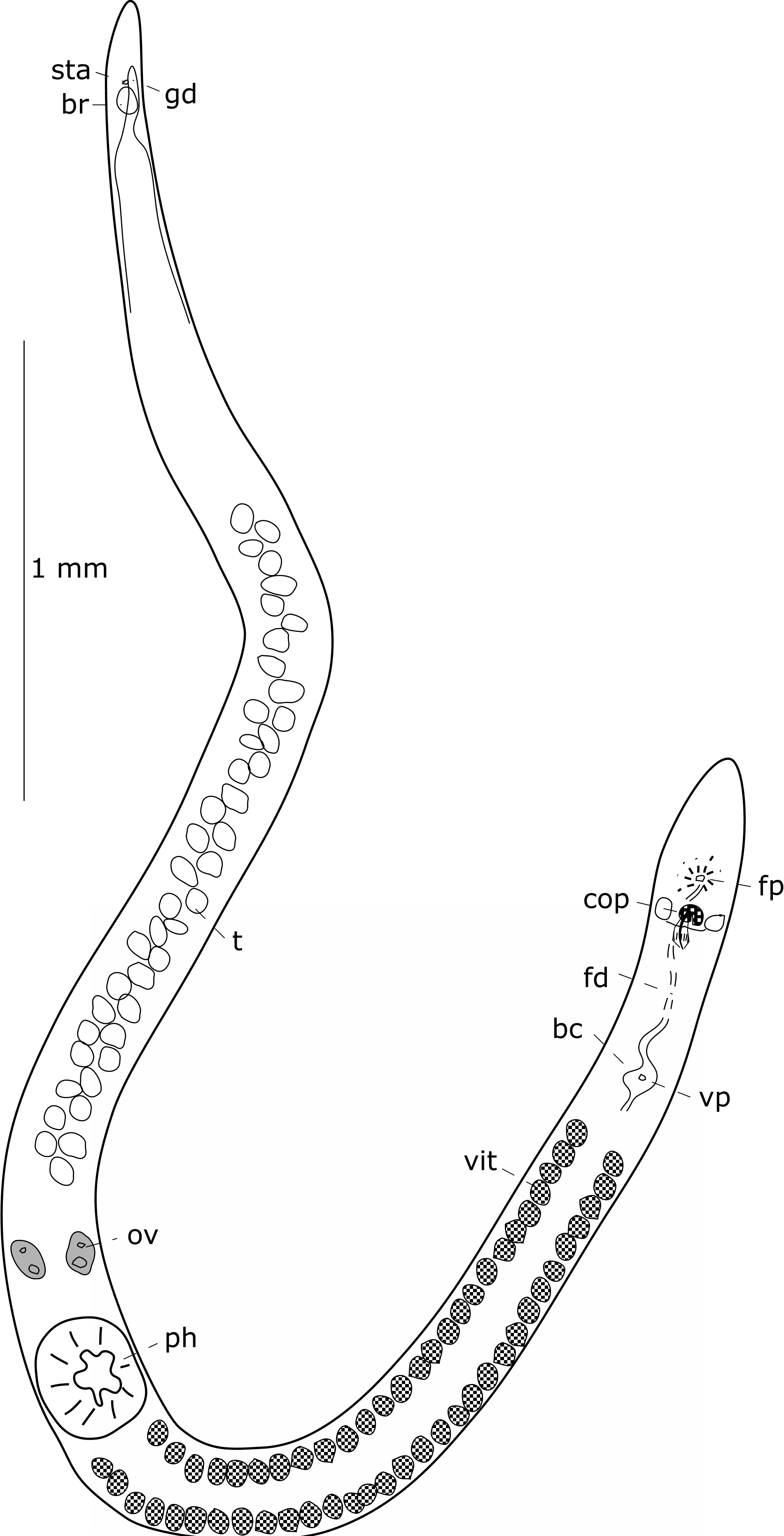 Figure 1. General appearance of a species of Meidiama combined from whole mounts of Meidiama lutheri, Meidiama uruguayensis, and fig. 120 of Marcus (1946). Refer to the Appendix for a list of abbreviations.

Figure 1. General appearance of a species of Meidiama combined from whole mounts of Meidiama lutheri, Meidiama uruguayensis, and fig. 120 of Marcus (1946). Refer to the Appendix for a list of abbreviations. 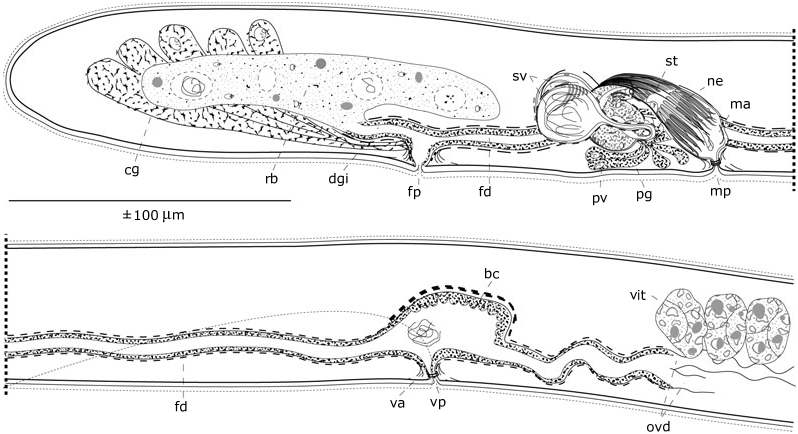 Figure 2. Sagittal reconstruction of the female system, seen from the left, of the species of Meidiama, mainly based on sections of Meidiama uruguayensis sp. nov. The lower figure is the continuation of the upper part. Refer to the Appendix for a list of abbreviations. 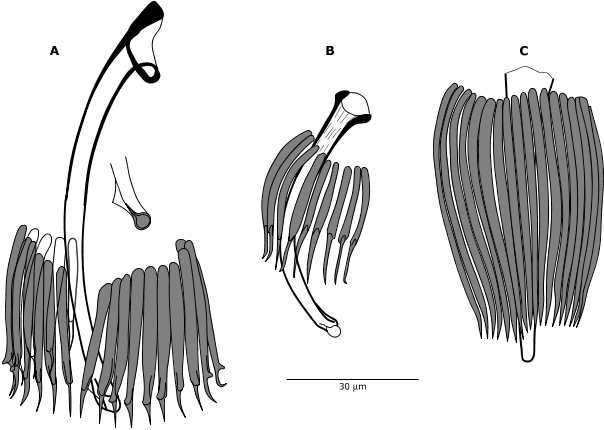