Etymology. This species is named after Pierre Fauvel, eminent French scientist, for his numerous contributions in polychaete taxonomy.

Variation. The results of the analysis of body variation and paragnath number are summarized in Tables 1 and 2. L10 and W3 had the highest coefficient of correlation with TL, followed by nCh, W10 and L3; RTC had no correlation with TL. Variation in paragnath number is very low, varying in one or two paragnaths in the areas VII – VIII. The number of paragnaths in the areas V, VI and VII –VII is similar to found in other Pseudonereis  species ( Bakken 2007, Table 1).

Fauvel (1914) identified some specimens ( MNHN A106) from São João dos Angolares, São Tomé, Gulf of Guinea as P. ferox  . He noted the similarity between P. ferox  and P. gallapagensis  , and based on Gravier (1909), he retained the former as a valid species, but he changed his mind later ( Fauvel 1932: 111) and synonymized P. ferox  and P. variegata  with P. gallapagensis  . Augener (1918) identified his specimens from Gulf of Guinea as Nereis (Perinereis) variegata  , including the synonymy of Nereis mendax Stimpson, 1856  , a South African species previously transferred to Perinereis  by Willey (1904: 262). The original description by Stimpson (1856: 392) is short and no illustrations were provided, preventing a reliable identification. Willey (1904) identified his specimens from Cape of Good Hope, South Africa as P. mendax  and included illustrations of the anterior end and parapodia, but no details about the identification were made; moreover, he synonymized Mastigonereis podocirra Schmarda, 1861  and Nereis (Nereilepas) stimpsoni Grube, 1866  (both species from Cape of Good Hope) with P. mendax  , perhaps because he did not find differences among the genera Paranereis  , Perinereis  and Pseudonereis  based on paragnaths in the areas VI, even after the examination of Kinberg’s types. This fact explains in part the current list of synonyms for P. variegata ( Read 2018)  . Based on the illustrations, P. mendax sensu Willey (1904, Pl. 13, Fig. 13, Pl. 14, Figs. 3–6)  differs from P. fauveli  sp. n. mainly in the presence of crescent-shaped bars in the areas VI and the subdistal insertion of dorsal cirri in posterior chaetigers in P. mendax  , instead of shield-shaped bars in the areas VI and dorsal cirri distally inserted in P. fauveli  sp. n.; similarly, M. podocirra  and N. stimpsoni  have dorsal cirri subdistally inserted to notopodial dorsal ligules in posterior-most chaetigers, whereas in P. fauveli  they are distally inserted ( Grube 1868, Pl. 2, Figs. 8d, 8eView FIGURE 8; Schmarda 1861, text Figs. A, B). Future studies are needed to clarify the status of the above species. 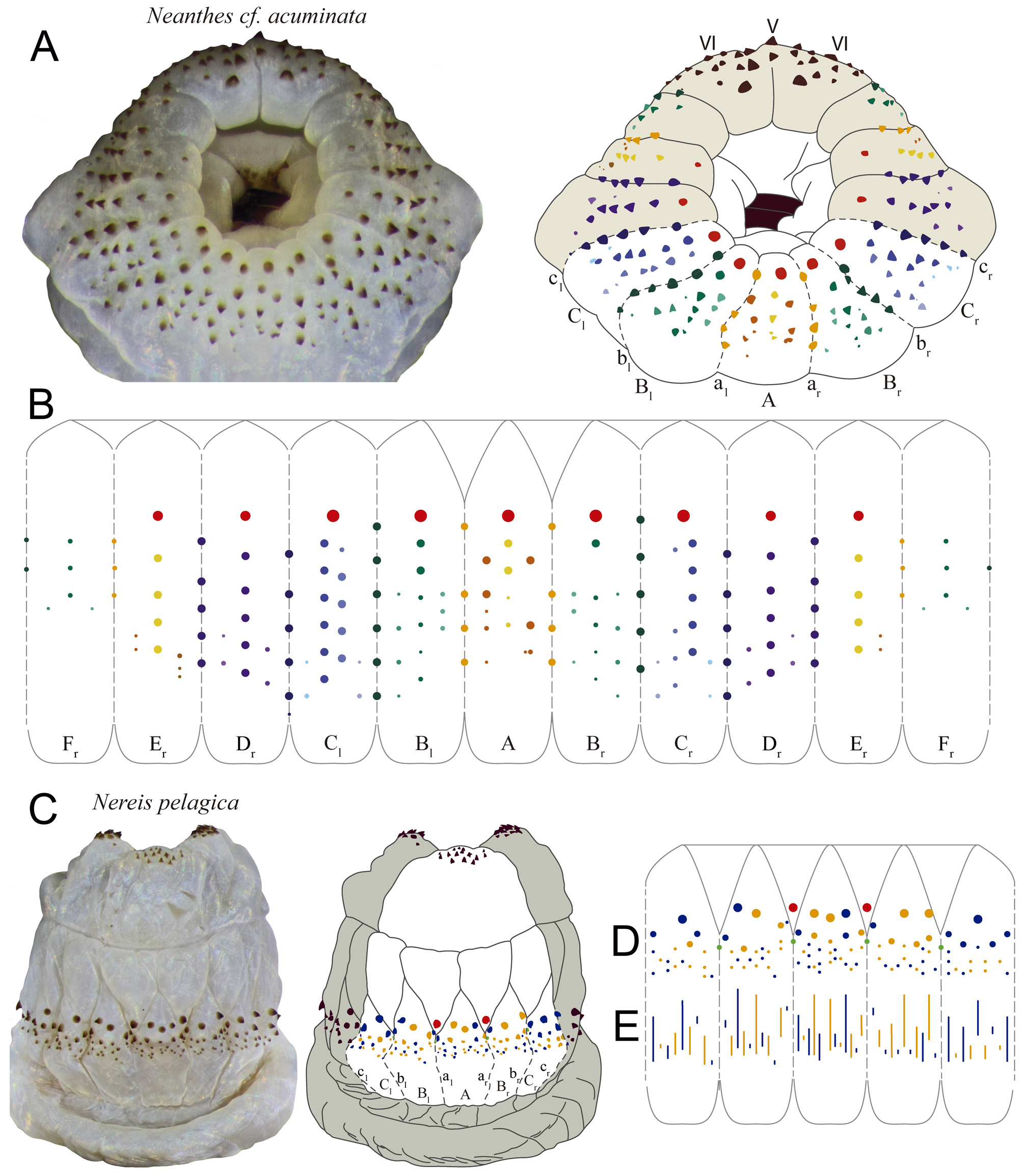 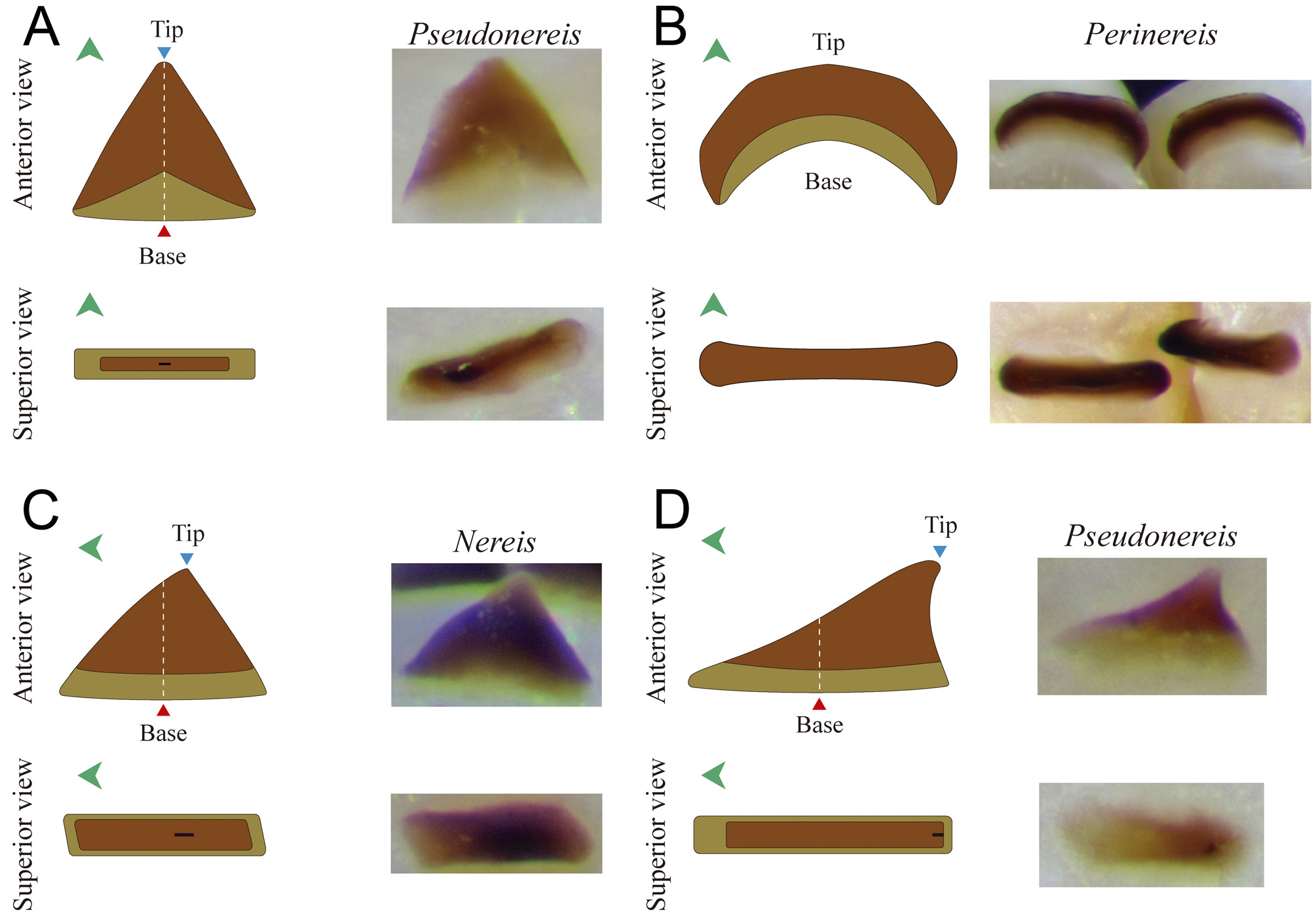 FIGURE 5. Classification of some rectangular-base paragnaths. A, shield-shaped bars. B, crescent-shaped bars. C and D, pointed bars (P-bars). Drawings show the tip (dark brown) and base (light brown) of paragnaths, in both anterior and superior views; each drawing is accompanied with a picture of the same paragnath and at the same view. Green arrowheads point toward the anterior end of the body, showing the relative position of the paragnaths in relation to the pharynx axis. Blue vertical triangles point to the distal tip of the paragnaths; red triangles point the midpoint of the bases, and white dotted lines represent the bases’ altitude lines. A, D, Pseudonereis brunnea sp. n. (ECOSUR P2926); B, Perinereis floridana (ECOSUR P1100); C, Nereis garwoodi (ECOSUR P2831).