Remarks. Bakken (2007), following Ehlers (1901) and Augener (1934), redescribed P. variegata  with the syntypes of Nereis ferox  from Rio de Janeiro, Brazil, because the type material of Nereis (Nereilepas) variegata Grube & Kröyer in Grube, 1858  was not available. The type of N. variegata  was also unavailable for this study, but some topotype specimens were located in the USNM. Some publications characterizing the species from localities in South American Pacific coasts were also taken into account.

Horst (1889) examined Hansen’s (1882) types of Nereis ferox  , N. coerulea  , N. microphthalma  and N. obscura  , all species from Brazil, and synonymized the last three species with N. ferox  because he did not find major differences, and placed N. ferox  in the Perinereis  group featured by having a single paragnath in area I. Ehlers (1901) examined the holotype of P. variegata  and synonymized Paranereis elegans Kinberg, 1865  by comparing the original description, a decision supported by Hartman (1948: 69–70) after the examination of type material of P. elegans  ; Bakken (2007) found the type of P. elegans  in very poor condition. Also, Ehlers (1901: 117) agreed with Horst (1889) about the synonymy of N. coerulea  , N. ferox  , N. microphthalma  and N. obscura  . Ehlers (1901: 114) noticed the difference in attachment of dorsal cirrus in specimens he examined, where some had distal dorsal cirri and very vascularized notopodial dorsal ligules in posterior chaetigers, whereas other ones, including the holotype of P. variegata  , had subdistal dorsal cirri and less vascularized notopodial dorsal ligules; also, specimens with distal dorsal cirri ( Ehlers 1901, Pl. 14, Figs. 11View FIGURE 11 –13) had dorsal cirri much longer than in P. variegata  and P. gallapagensis  as herein described. This evidence indicates that Ehler’s specimens belonged to more than one species.

Augener (1934) examined Hansen’s type material, highlighting two important features in all descriptions: the dorsal cirri distally inserted, and one large paragnath in the areas VI in N. coerulea  , N. ferox  , and N. obscura  ; based on these features, Augener (1934) agreed with Ehlers (1901) about the synonymy of Hansen’s species with P. variegata  . Given that most of Hansen’s material is now lost ( Bakken 2007: 171), here the synonymy of N. coerulea  , N. microphthalma  and N. obscura  proposed by Augener (1934) is retained under the name P. ferox  , but the synonymy with P. variegata  is rejected based on the current descriptions. Augener (1934) also examined the holotype of Phyllonereis benedeni Hansen, 1882  , finding it fragmented and deprived of pharynx, and tentatively he assigned it to P. variegata  ; the illustrated parapodia ( Augener 1934, Fig. 25) resembles that of P. ferox  , but since the pharyngeal ornamentation is unknown, it is preferable to maintain P. benedeni  and P. ferox  as independent species until a further study clarifies its status.

FIGURE 1. Proposal of division of pharyngeal midventral area. A, Kinberg’s drawings of ventral pharynx of Perinereis novaehollandiae (9C.) and Mastigonereis spinosa (10C.), showing the area VII and VIII as originally was intended; gray areas are intended to highlight midventral area in white. B, midventral area, composed of the areas III, VII and four subareas of area VIII; areas VII and VIII subdivided in furrow (lowercase letters) and ridge (uppercase letters) regions from both left (suffix l) and right (suffix r). A redrawn from Kinberg (1910). 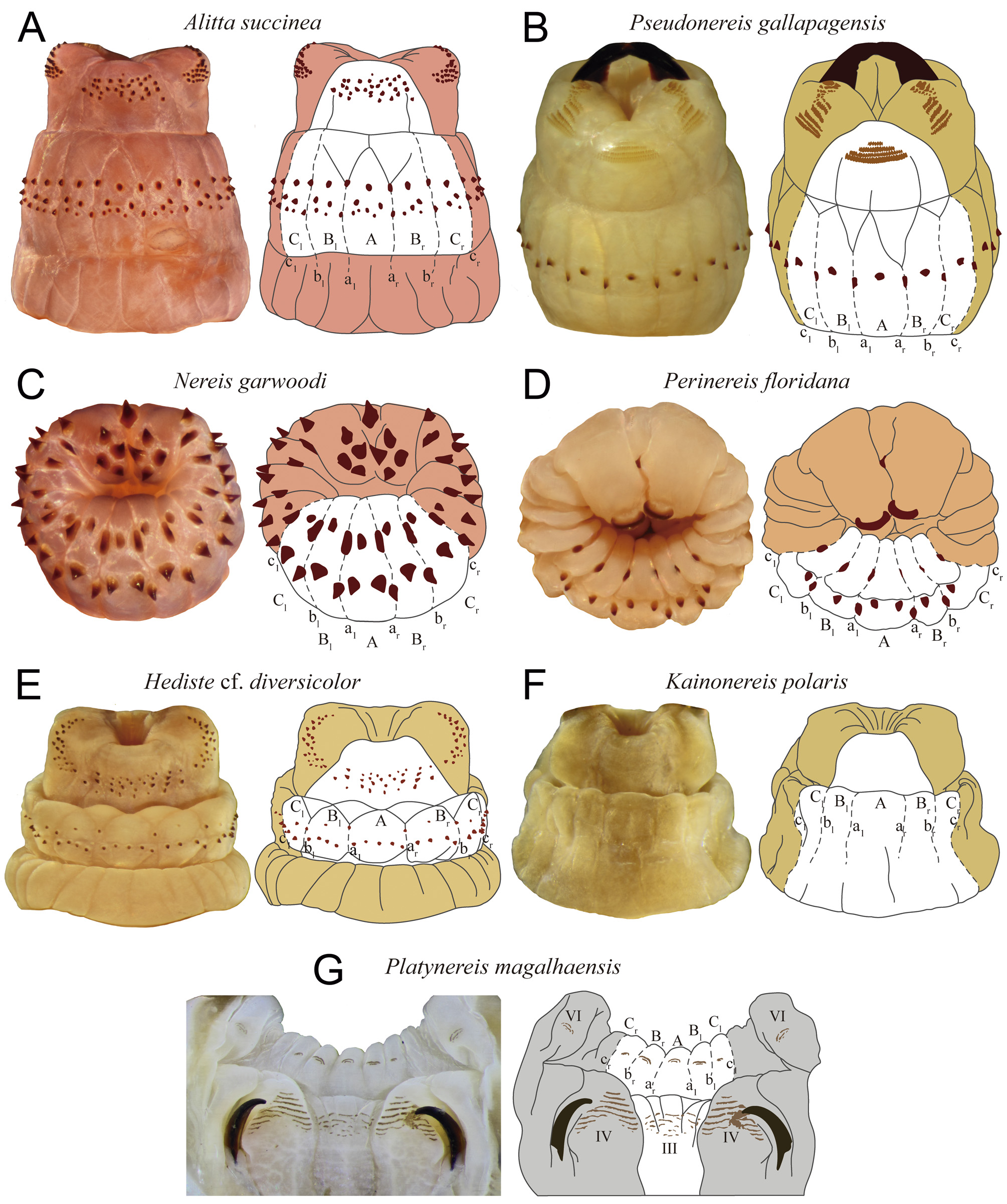 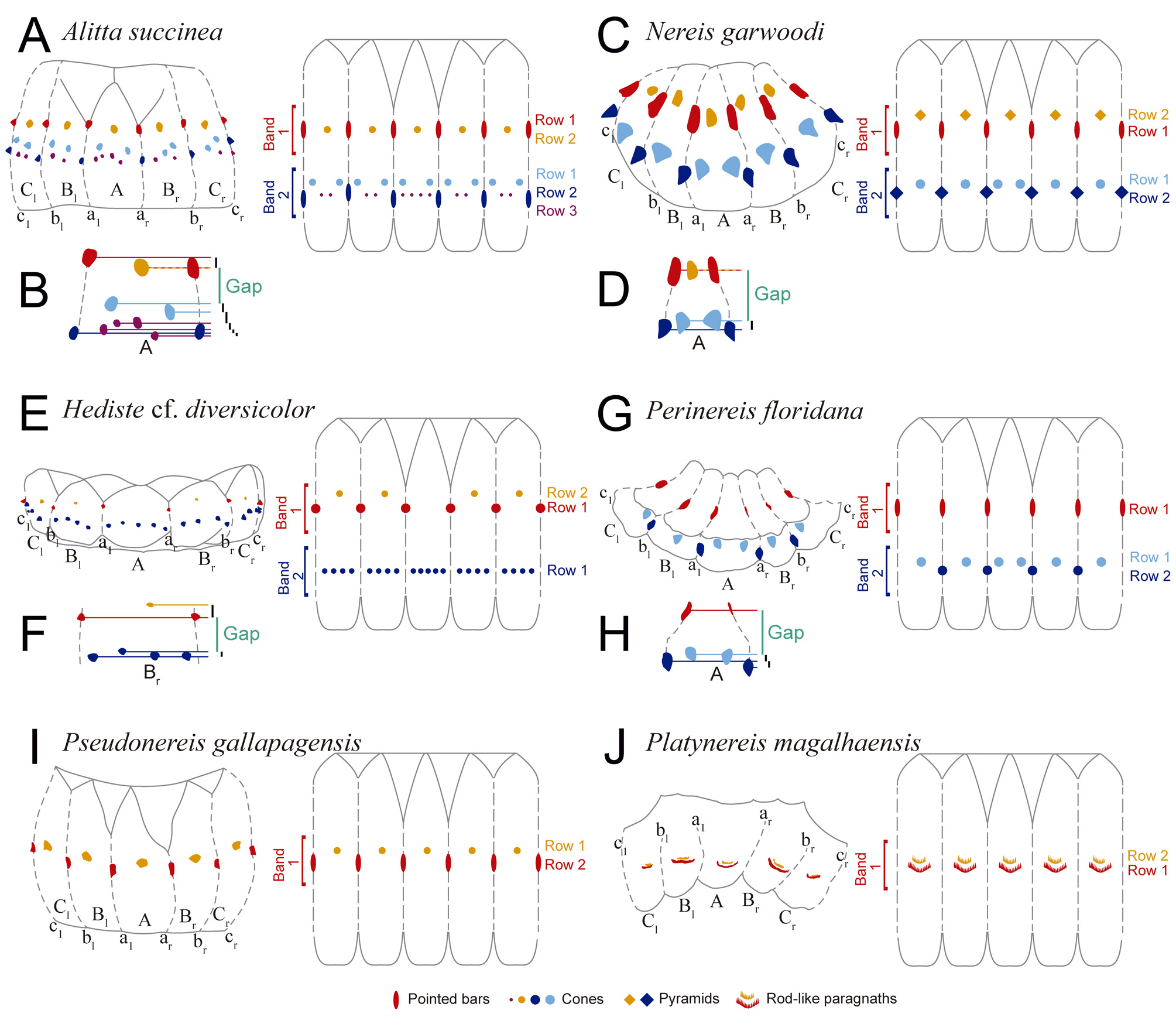 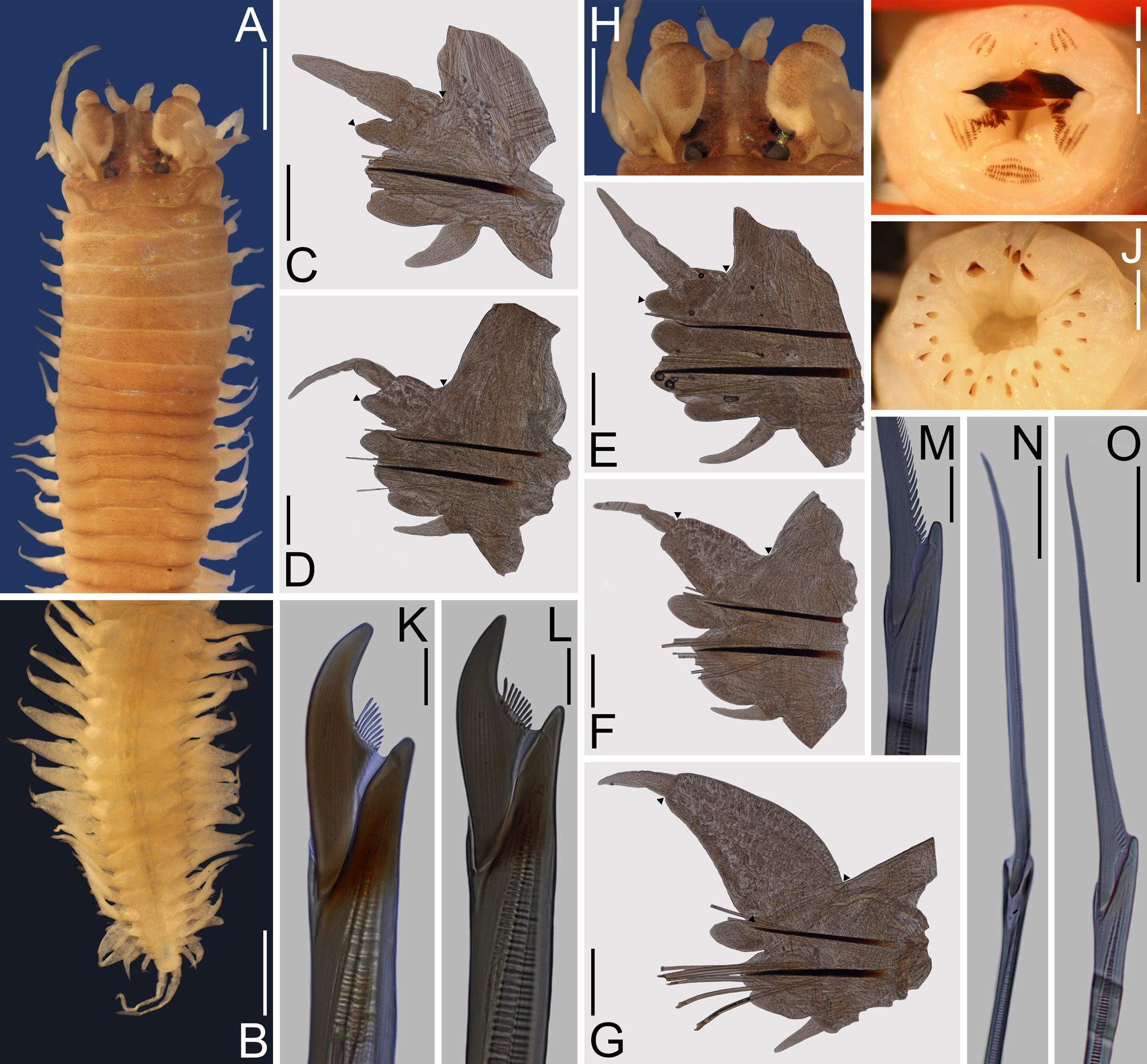 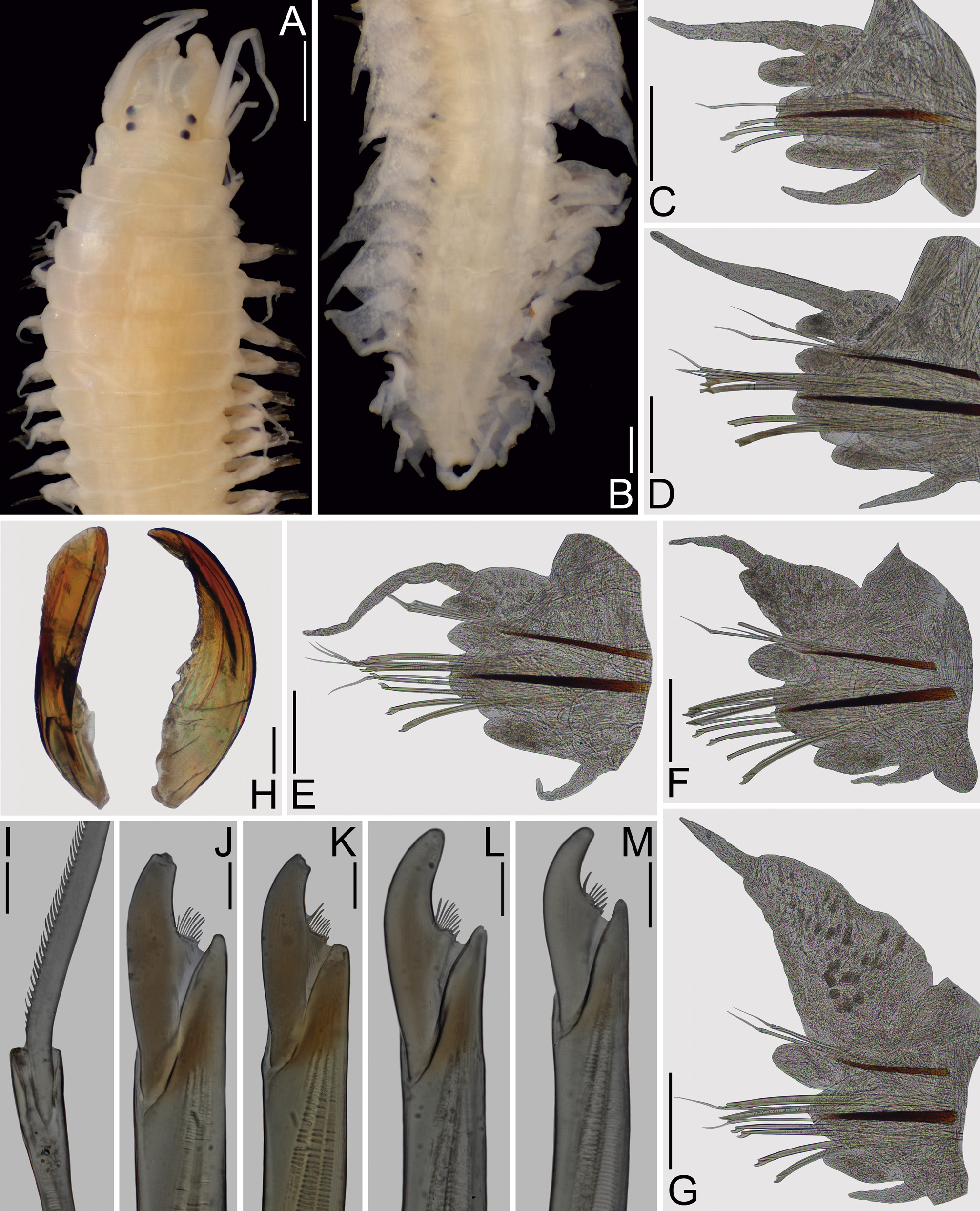