Etymology. The specific epithet is named in honor of Dr. Keith Tinker, Director of the Antiquities, Monuments and Museum Corporation ( AMMC) of the Bahamas. Over the last 20 years, Dr. Tinker has established and funded programs within the National Museum of the Bahamas specifically dedicated to the exploration and archaeological, paleontological and biological exploration and research in the blue holes and underwater caves of the Bahamas. This research culminated in the two sites listed in the present paper being included in a newly designated 34,000 acre blue holes conservation area, the highest degree of protection for any government lands in the Bahamas.

Distribution. The new species is known only from two anchialine caves on Great Abaco Island (Little Bahama Bank) in the northern Bahamas.

Habitat. Dan’s Cave and Sawmill Sink are extensive anchialine caves with nearly 20 km of mapped subterranean passageway. The entrances are separate by 3 km and each entrance is at least 1 km from the nearest coastline. Specimens were collected from small burrows within compacted, organic peat deposits of each cave. Both specimens were found within 40 m of the cave entrances, just below the halocline.

Remarks. The new species described herein is closest morphologically to Naushonia augudrea ( Juarrero & García, 1997)   from Holguín Province in eastern Cuba, with which it shares the carapace with cervical and cardiac grooves, and a similar spination pattern, as well as the toothed ventrolateral margins of pleura. In fact, N. tinkeri   n. sp. and N. augudrea   are the only two known species of Naushonia   with a carapace possessing both cervical and cardiac grooves. Despite their great overall similarity, N. tinkeri   n. sp. can be distinguished from N. augudrea   by the pigmented cornea, a first pereiopod with a more slender propodus (length/width ratio: 3.07 vs 2.41) and a dactylus without teeth on its external margin, and the telson longer relative to the uropod length (telson length/ exopod length: 0.83 vs 0.60) ( Juarrero et al. 1997).

Naushonia manningi Alvarez, Villalobos & Iliffe, 2000   , also described from an anchialine cave in the Bahamas, has some morphological resemblance to the new species, e.g. in the shape and size of the first pereiopod and the toothed ventrolateral margins of pleura 2–6. However, the carapace of N. manningi   has only one - cervical groove. Noteworthy, N. tinkeri   n. sp. and N. manningi   both present a sharp, prominent tooth on the ventral surface of the first pereiopod coxa ( Fig. 3 View FIGURE 3 D), a character that is only shared with N. japonica Komai, 2004   from Japan ( Komai 2004). It is not unusual to find morphological similarities among species of Naushonia   from different geographic areas. Anker (2014) stated that N. draconis   from Guadeloupe Island in the French Antilles (now also known from Cuba; Komai & Anker 2015) is most similar to N. palauensis ( Alvarez, Villalobos & Iliffe, 2010)   from Palau   ; whereas Komai & Anker (2010) compared, because of their similarity, N. latimana Komai & Anker, 2010   , from Mayotte Island and N. serratipalma Komai & Anker, 2010   , from the French Polynesia with N. perrieri (Nobili, 1904)   from Djibouti and N. japonica   from Japan. This pattern is usually associated with groups having an ancient origin, e.g. Cretaceous or even older, in which the original stock started to differentiate in the Tethys Ocean. 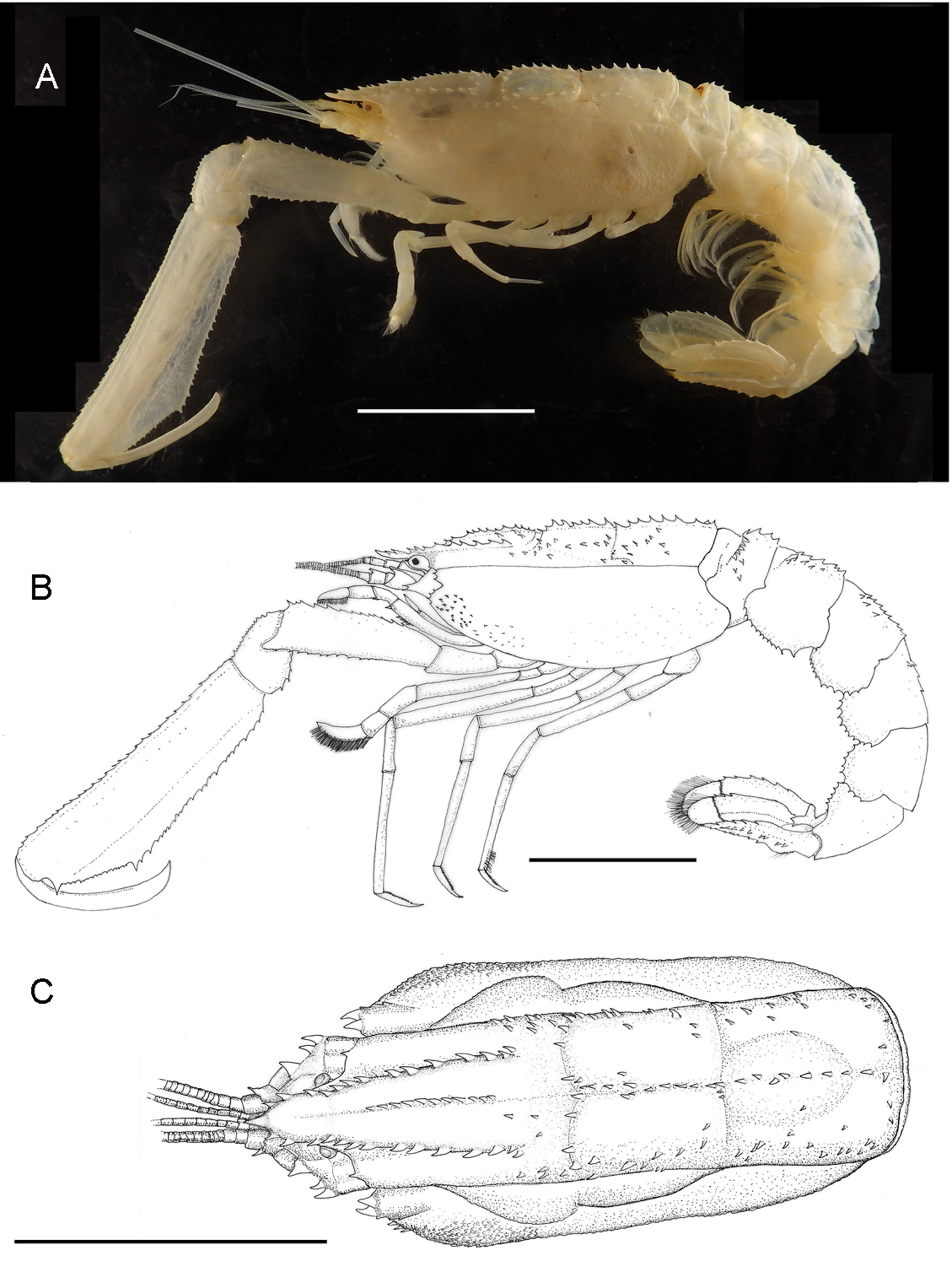