Diagnosis. A small, glossy, brown species with a sinuous to straight anterodorsal margin of the clypeus, smooth mesonotum and a narrow petiole node.

Mesoscutum in profile evenly rounded from pronotum to scutellum, scutellum rounded and raised only slightly above surface of mesoscutum, surface smooth and shining except for pitted setal insertion points. Pronotum, mesopleuron and propodeum finely reticulate, dorsal half of mesopleuron above central groove almost smooth. Propodeum with a series of parallel ridges on ventral margin of lateral surface that curve onto posterior surface. Petiole node triangular in profile, rounded in posterior view, petiole and postpetiole alveolate to reticulate, petiole laterally with transverse ridges on ventral half, postpetiole with irregular ridges on lateral and posterior surfaces. Metasomal tergites and sternites finely reticulate.

Colour entirely reddish-brown, metasomal tergites with a darker band along posterior margins. Head and mesosoma with many long and short, erect, dull setae except for a broad glabrous area that spans entire length of mesoscutum.

Remarks. Wheeler (1917) proposed the names M. subapterum   and M. subapterum   var. bogischi   as part of a discussion on the origins of aptery and subaptery stating that he would describe them “elsewhere”. No subsequent formal description of these forms occurred in the literature, but as brief morphological criteria are provided to distinguish M. subapterum   from ‘ M. rothsteini   var. humilius’ in Wheeler (1917), this is sufficient information to validate the names under the International Code of Zoological Nomenclature.

The queen description here is based solely on the paralectotype available. Two other queens found in a nest near Birdsville in the south west of Queensland show some morphological differences. In particular, the colour of the paralectotype is pale reddish brown ( Fig. 9 View FIGURE 9 a–c), whereas the Birdsville specimens are a dark crimson brown ( Fig. 9 View FIGURE 9 d–f). In addition the paralectotype has fine reticulate sculpture on the ventral half of the mesopleuron and the propodeum whereas the Birdsville specimens are strigate in these areas. The Birdsville specimens have a broad, glabrous area that spans the length of the mesoscutum, this area is much narrower in the paralectotypes. The worker lectotype and paralectotypes are indistinguishable from those that were freshly collected from the type locality and those from the type locality were found to have an identical COI sequence to the workers collected near Birdsville ( Sparks et al. 2014). The two populations are more than 900km apart, and therefore it is not unreasonable to expect that morphological differences exists across such a distance. However it is also possible that the two populations represent different species that we are currently unable to detect. The workers of M. bogischi   are very difficult to separate from M. torrens   sp. nov., M. subapterum Wheeler   , and M. speculum   sp. nov., but can be distinguished from these by the presence of a prominent anterior transverse carina on the propodeum. 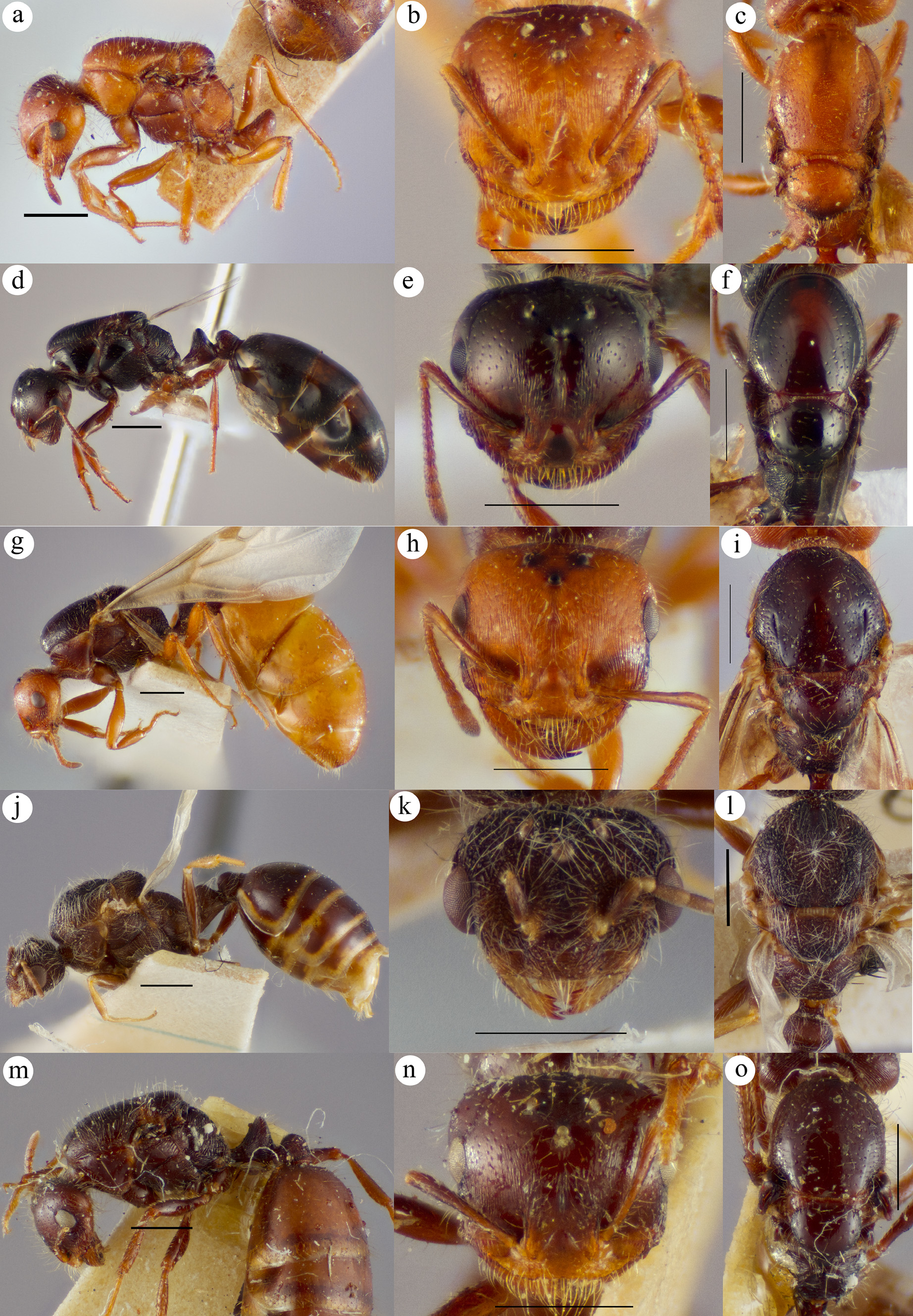