Note. The main description is based mainly on the asymmetrical specimen with a venter.

Dorsum. Derm fairly uniformly sclerotised with a darker pattern of sclerotisation medially, composed of a medial longitudinal dark band with a paler centre, and about 7 radial branches on each side, with 4 or 5 pairs of branches on abdomen and 2 or 3 on thorax but with those on head less clear; with small areolations near margin becoming larger in a broad submarginal band, these becoming smaller and more obscure medially; minute pale spots, if present, sparse and obscure, each 1.0–1.5 µm wide. Marginal radial lines indicated by short, obscure radial lines and by distribution of dorsal pore and setae, with 11 lines anteriorly between anterior stigmatic clefts, with 1 from each stigmatic cleft, each side with 3 lines between clefts and 11 on abdomen. Abdominal clear areas present but clear areas absent from prothorax. Dorsal setae rather narrow and short, generally curved, each 5 µm long with a slightly blunt, non-flagellate apex; sparse, possibly restricted to near margin in more posterior radial lines; absent medially. Dorsal pores all relatively small, as follows: (i) large pores hard to distinguish from setal sockets, each perhaps 3.0–3.5 µm wide, common submedially and submarginally, appearing as a clear spot, possibly with a sclerotised margin; (ii) a smaller pore, each 2 µm wide, appearing as a smaller clear spot in sclerotised derm without a sclerotised margin, present in a sparse polygonal pattern including medially; and (iii) minute pores, probably simple pores, each about 1 µm wide and possibly with an inner ductule, also apparently in a sparse polygonal pattern. Anal plates together slightly longer than combined width; each plate with a rounded outer angle, 1 or 2 small pores medially and 2–4 small setae near apex; length of plates 136–140 µm, combined width 98–108 µm. Anogenital fold with 1 small seta on each side of anterior margin, each lateral margin with 1 seta at anterior end, 1 midway along margin and another posteriorly.

Margin. Marginal ornamentation present as distinct, quite strong, shallow sclerotisations without short radial lines or ridges but each on a slightly raised area of derm; with 1–4 (usually 2) sclerotisations between marginal setae. Marginal setae fan shaped, slightly oval to significantly wider than long; width of each fan 27–34 µm, length 18–23 µm; with 71–82 setae anteriorly between anterior stigmatic clefts, each side with 23–30 setae between stigmatic clefts, and 60–75 along abdominal margin. Stigmatic clefts quite deep, with a sclerotised inner margin, each with 3 stigmatic spines, each generally broadening slightly towards apex; median spine longest, each 35–38 µm long, each lateral spine 30–37 µm long. Eyespots oval; greatest width of socket about 75–80 µm, diameter of lens about 25 µm.

Venter. (Only present on 1 specimen). Derm with a dark marginal band 90–145 µm wide, with darker radial “fingers”; border extends up anal cleft and becoming denser beneath posterior apex of anal plates. Multilocular disc-pores in groups on either side of genital opening and on preceding 1 or 2 segments, each side with 8 on abdominal segment VII, 15 on segment VI and 0 or 1 on segment V. Spiracular disc-pores present in a narrow band between margin and each spiracle, with 12–14 in each band on short side and 20–22 on each longer side. Ventral microducts possibly detected around mouthparts. Ventral setae: with 2 interantennal setae; longer setae present in abdominal segments VII –V and pairs of shorter setae in segments IV –II; also with 1 short seta mesad to each coxa; submarginal setae few and short; other setae not detected. Antennae well developed, each with 6 segments; total length 248–270 µm; apical segment about 60 µm long; apical seta 18–22 µm long; setal distribution normal. Clypeolabral shield about 95 µm long. Spiracles small, width of each peritreme 21–23 µm. Legs fairly well developed, tibio-tarsal segmentation present; dimensions of hind leg (µm): coxa 85–92, trochanter + femur 125– 130, tibia 75–80, tarsus 65–68; claw 12. Tarsal digitules slightly longer than claw digitules, with capitate apices, subequal in size; claw digitules both considered to be broad and about same width; claw without a denticle; setal distribution: coxa 5 or 6; trochanter 1; femur 1 or 2; tibia 2 and tarsus 3.

Adult female P. machili   are also extremely similar to those of P. planum   . However, they differ in that: (i) the marginal ornamentation is quite different, that of P. machili   consisting of large, shallow sclerotised patches along the margin, with 1–3 (usually 2 or 3) between two marginal setae, whereas the ornamentation on P. planum   consists of small sclerotisations lying radially, each with a long “stalk”, and with about 8 between two marginal setae; and (ii) the four pairs of oval clear areas on the abdomen are distinct on P. machili   but indistinct or absent on P. planum   . 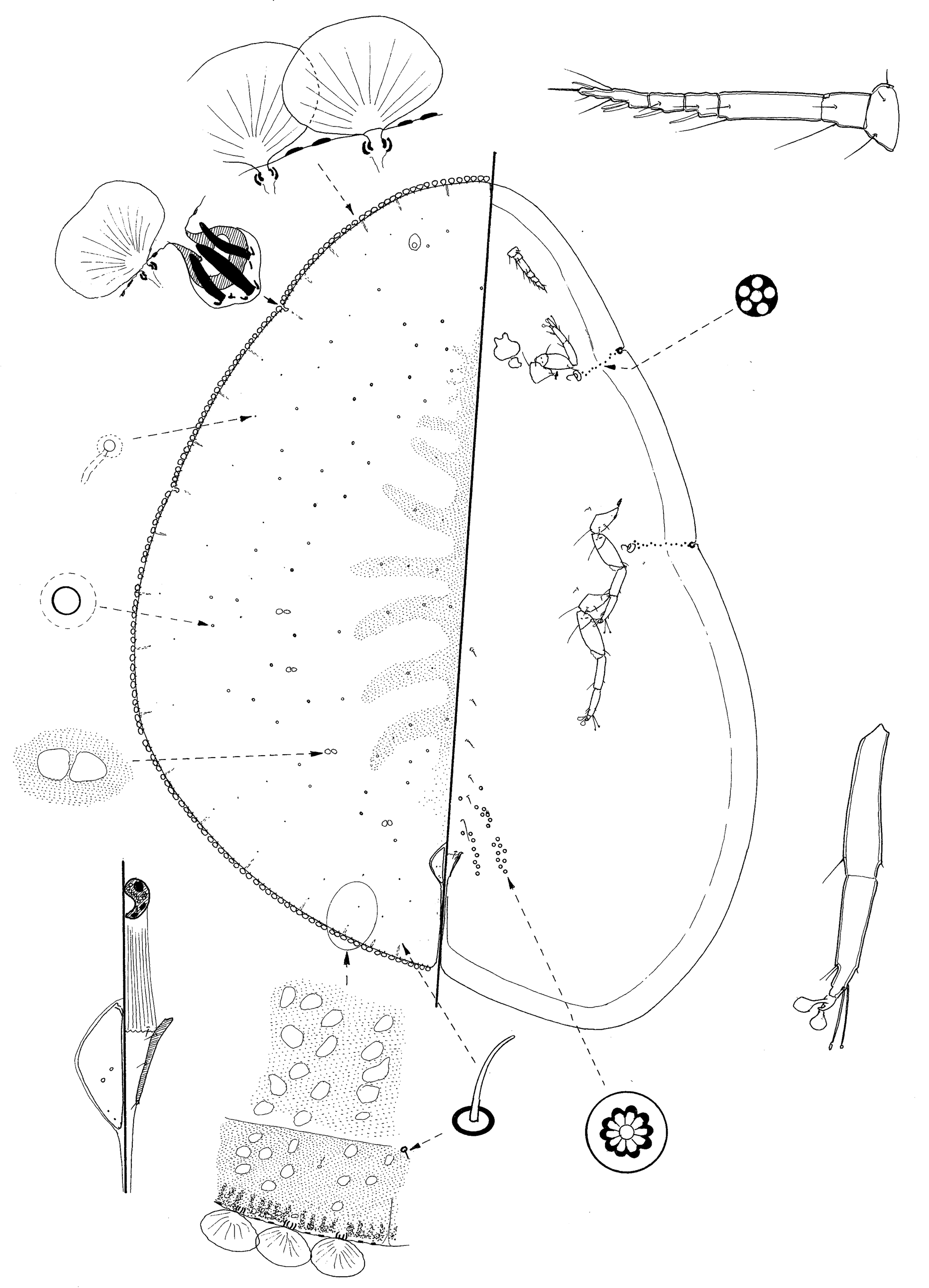