Note. The description is based on all the specimens.

Dorsum. Derm rather uniformly sclerotised without obvious areolations, except just laterad to each anal plate; derm without minute pale spots. Marginal radial lines obscure but indicated by position of submarginal dorsal setae: with 11 lines anteriorly between anterior stigmatic clefts, with possibly 1 from each stigmatic cleft, each side with 3 between clefts and 11 on abdomen. Abdominal clear areas absent. Dorsal setae of 2 sizes: (i) large setae, each about 60–80 µm long, strongly curved, broad throughout most of length and then narrowing abruptly to a sharp point; each basal disc without a surrounding unsclerotised area of derm; distribution highly variable between specimens but usually with at least 1 approximately dorsad to one or both scapes; other large setae on each side may be present as follows: 1 submedially on about prothorax, up to 4 submedially on abdomen and sometimes one more medially anterior to anal plates; and (ii) more normal-sized setae, each 8–12 µm long with parallel sides and a sharp apex; apparently restricted to within marginal radial lines but only 1 in each line, although presence in each marginal radial line rather variable; almost all within broad pale ventral marginal band; apparently absent medially. Dorsal pores of 3 sizes present: (i) larger dorsal pores, each 5.0–6.0 µm wide, appearing as a sclerotised ring surrounded by a narrow unsclerotised area; present sparsely submedially, each side with about 15–25; (ii) small simple pores, each about 1.5 µm wide, situated in a clear spot, and (iii) minute pores, each also situated in a clear spot; both pore types sparse in an apparently polygonal pattern. Anal plates together approximately quadrate; each plate with 1 seta in middle of inner margin plus 2 or 3 near apex and with 0 or 1 small pore; length about 90–100 µm, combined width about 65–78 µm. Anogenital fold with 1 small seta on each side of anterior margin, each lateral margin with 1 anteriorly, 1 near middle and another seta at posterior end.

Margin. Marginal ornamentation present as distinct, quite strong radial sclerotisations, with usually 5 or 6 between marginal setae. Marginal setae oval and broadly fan-shaped; width of each fan 33–38 µm, length 21–28 µm; with 41–48 setae anteriorly between anterior stigmatic clefts, each side with 14–17 between stigmatic clefts, and 43–49 setae along abdominal margin. Stigmatic clefts narrow and quite deep, without a sclerotised inner margin, each with a single stigmatic spine, each spine narrow basally and then broadening and becoming clubshaped distally with a rounded apex; usually not nearly extending out of cleft; length 15–25 µm. Eyespots each oval; width of socket about 30 µm, diameter of lens 16–18 µm.

Venter. Derm membranous but, on mature adults, with a broad marginal band; on asymmetric specimens, on narrow side about 85 µm wide, on broad side up to 200 (mostly about 150) µm wide. Multilocular disc-pores in groups on either side of genital opening and on preceding 2 segments, each side with 5 or 6 on abdominal segment VII, 9–18 on segment VI and 1 (rarely 0) on segment V. Spiracular disc-pores present in a band 1 pore wide between margin and each spiracle, with 11–18 in each anterior band and 17–25 in each posterior band. Ventral microducts minute and very sparse. Antennae well developed, each with 6 segments, without a pseudo-articulation in segment III; total length 220–230 µm; apical segment 50–58 µm long; apical seta 20–23 µm long. Clypeolabral shield small, about 80–95 µm long. Spiracles small, width of each peritreme 16–18 µm. Legs well developed, with reasonably clear trochanterofemoral and tibio-tarsal segmentation; dimensions of hind leg (µm): coxa 68–75, trochanter + femur 103–107, tibia 48–53, tarsus 50–60, claw 8–10. Tarsal digitules slightly longer than claw digitules, with capitate apices; claw digitules both broad but one broader than other; claw without a denticle.

Comments. In having two sizes of dorsal setae, adult female P. busoense   spec. n. are extremely similar to those of P. pahanense Takahashi   but differ as follows (character-states for P. pahanense   in brackets): (i) the stigmatic spines are basically club-shaped, narrow near the socket and broadening about 1/3rd along length, and usually not nearly extending out of cleft (parallel-sided throughout its length and longer, extending out of cleft); (ii) on the basis of the available material, the larger dorsal setae are (a) generally bent and not gradually narrowing to a fine point, and (b) may be found sparsely throughout the dorsum submedially ((a) mainly straight and narrowing gradually, and (b) restricted to submedially on the abdomen); (iii) the larger dorsal pores are more abundant, numbering 15–25 one each side (about 10 on each side), and (iv) the smaller dorsal setae are parallel-sided with a sharp point (with a blunt, more or less capitate apex). However, only a single specimen of P. pahanense   was available for study and it is just possible that these differences represent geographical variation. 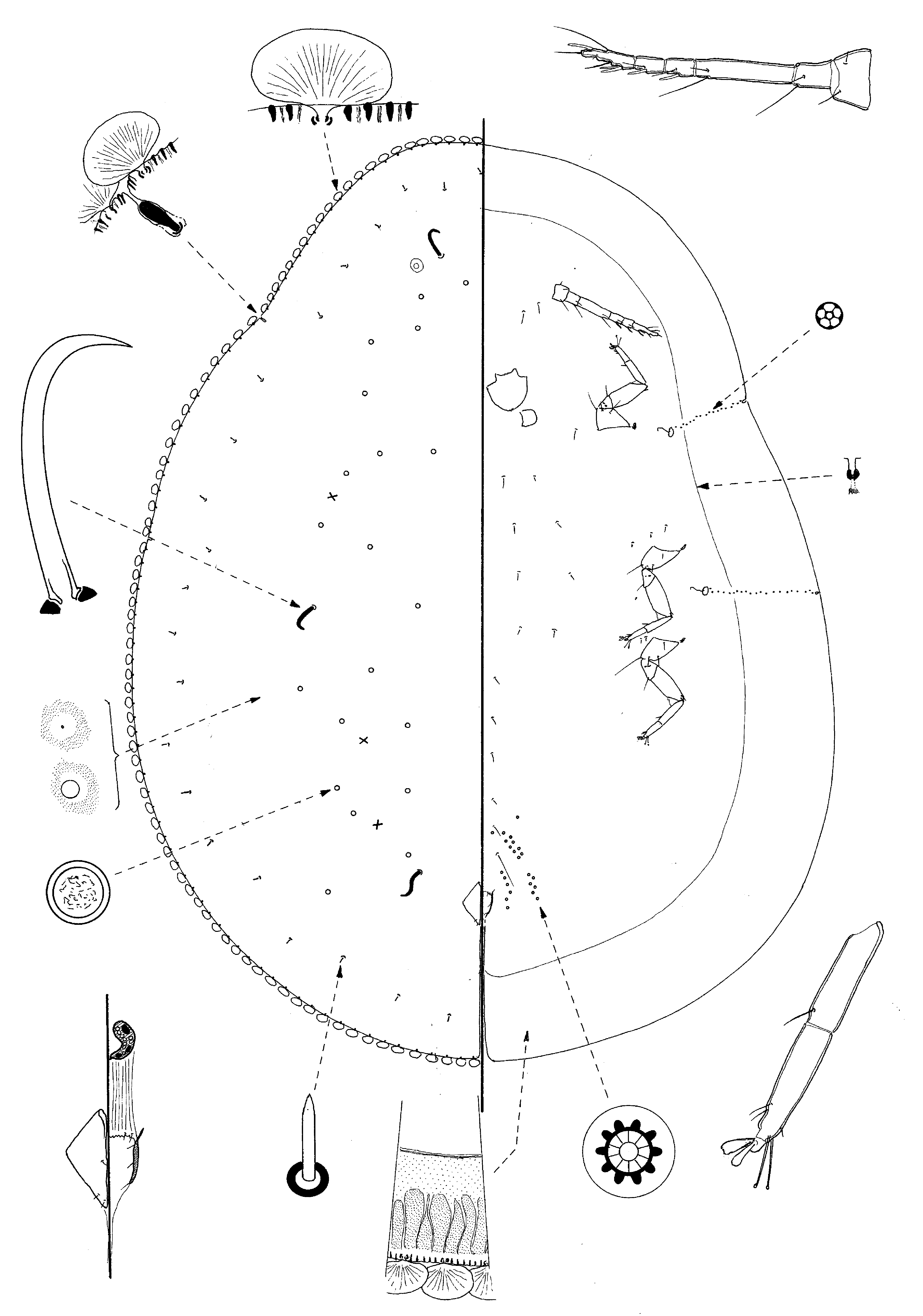