Note. The description is based mainly on two young unsclerotised specimens (one the holotype).

Dorsum. Derm of older adults rather uniformly sclerotised, with a fairly broad band of elongate areolations close to margin, the long axis of each areolation parallel with margin; inner submargin with small oval areolations, these absent or indistinct submedially and medially; rest of derm apparently without abundant minute pale spots. Stigmatic rays present; marginal radial lines obscure, indicated by lines of pores and setae, with 13 lines on head between anterior stigmatic clefts, and each side with 5 between stigmatic clefts and 13 on abdomen. With 4 pairs of abdominal clear areas but none associated with apex of anterior stigmatic rays. Dorsal setae quite long and spinose, each with parallel sides and a pointed apex, 16–18 µm long, frequent in a sparse polygonal pattern submarginally but absent submedially and medially. Preopercular pores mostly each 4–5 µm wide, distributed as follows: CA1 with 5–12 pores, CA2 with 10–16, CA3 with 15–21 and CA4 with 0–2 pores. Other dorsal pores all small, possibly in a polygonal pattern, of 2 sizes: a minute pore (appearing as a clear spot) about 1 µm wide, and a slightly larger clear spot, each about 3 µm wide with a dark pore, perhaps a dorsal microduct; both pore types present throughout but only visible on mature specimens. Anal plates rather small and together almost square, outer angle almost a right-angle, with anterior and posterior margins subequal in length; each plate with 4 minute setae near posterior apex plus 1 or 2 small pores medially; length of plates 2 00–210 µm, combined width 170–185 µm. Anogenital fold with 3–5 minute setae at each corner of anterior margin, each lateral margin with a seta anteriorly and another at posterior end.

Margin. Margin with shallow corrugations, each with strong radial lines or ridges, each radial line about 10 µm long; with mostly 2–7 corrugations between 2 setae. Marginal setae broadly fan-shaped, wider than long; width of each fan about 33–45 µm, length 25–30 µm; with 71–80 setae anteriorly on head between anterior stigmatic clefts, and each side with 29–42 between stigmatic clefts and 6 1–83 on abdomen. Stigmatic clefts quite deep, each with a narrow entrance, broadening inwardly, and a sclerotised inner margin and with 5 (rarely 4) elongate, blunt to slightly pointed stigmatic spines; middle spines longest, each 55–60 µm, outermost spines in each group 23–35 µm long. Eyespots: each with a socket 28–38 µm wide, diameter of lens 25–28 µm.

Venter. Derm membranous but with a narrow, more sclerotised border about 40 µm wide. Multilocular discpores frequent on either side of genital opening and on preceding two segments only, each side with 13–24 on abdominal segment VII, 30–39 on segment VI and 22–27 on segment V. Spiracular disc-pores present in broad bands, 3 or 4 pores wide, between margin and each spiracle, with 21–42 pores in each anterior band and with 15–25 in each posterior band, the latter with a broad gap in middle part of band. Ventral microducts minute, present in a dense group just posterior to and on either side of labium and frequent elsewhere. Ventral setae: with 2 pairs of intersegmental setae; pairs of long pregenital setae on segments VII –V (that on VII 80 –90 µm long); without a group of setae laterad to anterior end of anal cleft; small setae present sparsely elsewhere. Antennae reduced, each with 4 segments (segmental divisions between segments IV –VI absent); total length 95–125 µm; apical seta 13–17 µm long; only a single seta present on pedicel and no setose setae on segments IV and V. Clypeolabral shield 100– 110 µm long. Spiracles: width of each peritreme 40–53 µm. Legs represented by minute sclerotisations, each less than about 8 µm wide, but some apparently missing.

Comments. Adult female D. martini   spec. n. are very similar to those of D. expansum   but differ as follows (character-states for D. expansum   in brackets): (i) preopercular pores associated mainly with anterior three clear areas, absent or very few associated with CA4 (generally absent associated with anterior clear areas, most abundant around CA4); (ii) dorsal setae long and parallel-sided, with a sharp apex (much shorter, with a blunt or capitate apex); (iii) legs, when present, represented by minute sclerotisations (distinct leg stubs present); (iv) spiracular disc pores in broad bands between margin and each spiracle (in narrow bands about 1 pore wide); (v) anal plates together almost square (clearly much longer than wide); and (vi) marginal setae on each side between stigmatic clefts numbering 29–42 (more numerous, numbering 55–65).

Name derivation. This species is named after the collector, Dr Jon Martin, a specialist in Aleyrodomorpha who has collected a very large number of Coccomorpha also, particularly in Asia, including this new species. 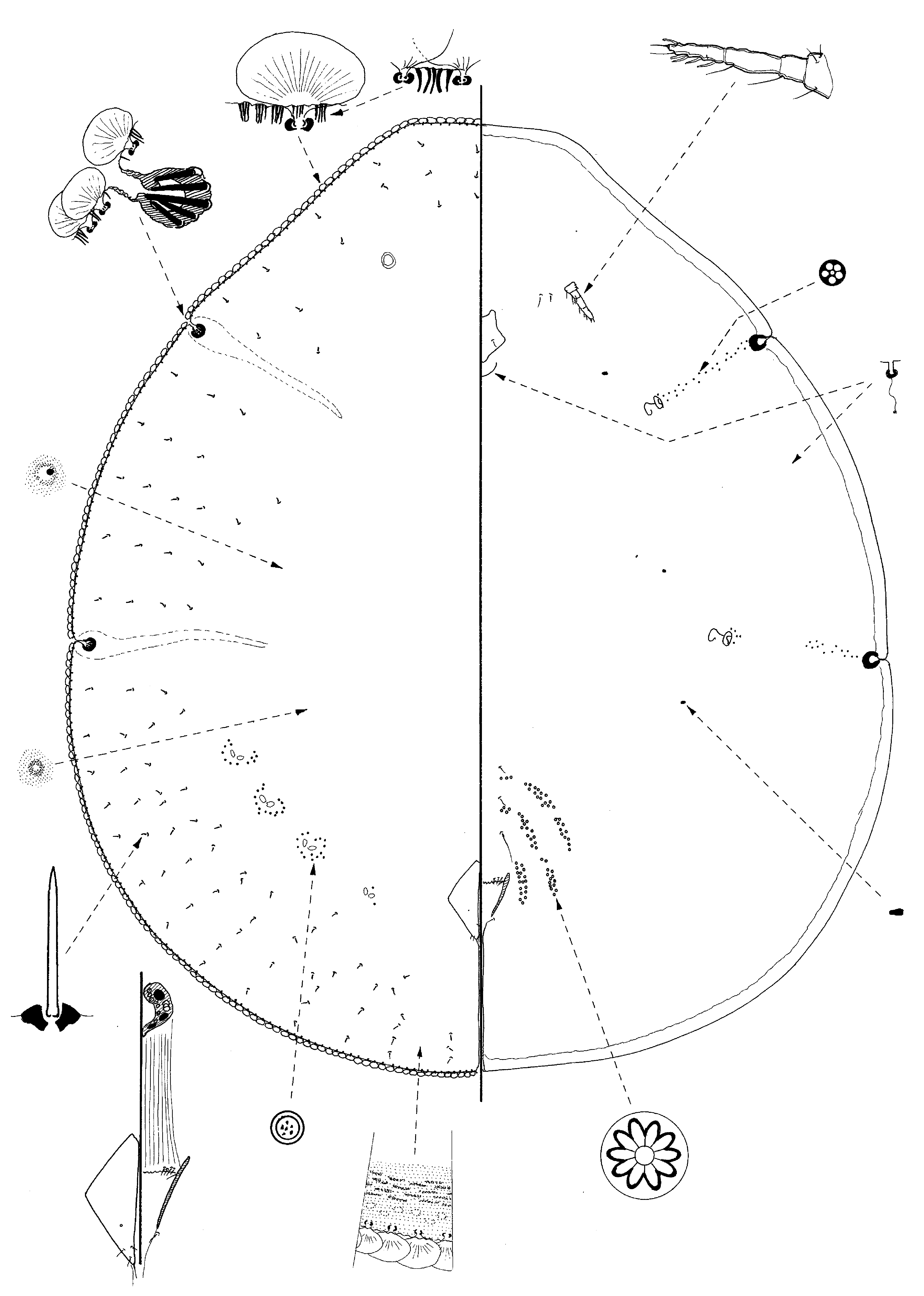