Diagnosis. Females of N. fragariae  are unique among similar species of Nomada  in having absolutely no hair on the posterior surface of the propodeum (the other species having copious, long hair) particularly in combination with the uninterrupted bands of yellow maculations on their metasomal terga (Fig. 22). We are aware of only two other eastern species with restricted hair on the propodeum, namely N. graenicheri Cockerell  and N. besseyi Swenk.  (While not treated in this paper, these two species are likely to be synonymous). In N. fragariae  , the hind tibia on the outer apical margin has four to six long, stout, spine-like hairs, of approximately the same length as the surrounding white hairs, and the stout, spine-like hairs are curved ventrally, not posteriorly as in N. luteoloides Robertson  or N. imbricata Smith  ( Fig. 17View FIGURES 13 – 18). In addition, the flagellar segments (on the posterior surface when the antenna is directed dorsally) have comparatively long, erect hairs in addition to the more commonly found microscopic, more appressed hairs found in this area when compared to similar species ( Fig. 24).

Males of N. fragariae  are unique among similar looking species (e. g., N. luteoloides  , N. imbricata  , and N. annulata Smith  ) in the shape, color, and especially pilosity of F 11: when the antenna is directed dorsally, the anterior surface (of all flagellar segments including F 11) is relatively pale, the apical tip of F 11 is located near the midpoint of the flagellar segment or is only slightly shifted laterally (the apical tip is nearly at the lateral edge of F 11 in other species, although less extremely so in N. sulphurata  ), and there are three to seven hairs that project out from the apical tip that, while microscopic, are distinctly visible when viewed through a microscope and are much longer than the small, appressed hairs that are scattered over the surface of F 11 (there are no hairs projecting beyond apical tip of F 11 in the other species) ( Fig. 26). Additionally, the entire lateral margin of the mesoscutum usually has a narrow, sometimes faint, border of yellow ( Fig. 8View FIGURES 7, 8). Only N. imbricata  also has such a yellow lateral maculation on the mesoscutum. In most specimens of N. imbricata  this border is absent; when present it is restricted to the margin posterior to the tegula (very rarely extending along the entire lateral margin), and the remaining similar species have no known instances of yellow on the mesoscutum. The scutellum of N. fragariae  has a broad transverse band of yellow present in all examined specimens ( Fig. 8View FIGURES 7, 8), unlike the common occurrence of two distinctly separated, round, yellow circles in similar species. The length of F 1 is variable, but is usually about half the length of F 2 ( Fig. 25). On the outer apical margin of the hind tibia there are four to eight stout, spine-like hairs that are usually difficult to detect as they blend into the white hairs surrounding them; nonetheless these stouter hairs are unique in that they are evenly spaced from each other, are found on the apical margin of the tibia, and are usually just slightly longer than the surrounding white hairs ( Fig. 18View FIGURES 13 – 18). The posterior surface of the propodeum is variable in the amount of yellow maculation present, ranging from absent (rare) to three separate pairs of patches (usually there is one maculation above the hind coxa, one laterally on the propodeal triangle, and often a fainter one in between these two maculations). The hypoepimeron usually has a very faint yellow maculation, and the mesepisternum centrally has a longitudinal yellow stripe extending from the anterior angle to the posterior margin. Finally, the anterior surface of the antenna (when directed dorsally) is yellow-brown.

Molecular results. We obtained DNA barcode data from one male specimen and one female specimen of N. fragariae  collected in Calvert Co., Maryland ( Table 1). The sequence divergence between these specimens was only 0.3%. These nearly identical sequences provide further evidence that these are different genders of the same species. The description of the female provided herein is based on the specimen included in the molecular analysis.

Variation. In the males, the yellow maculation on T 1 varies widely from uninterrupted to constricted to completely interrupted medially. Most individuals have uninterrupted transverse yellow maculations on the remaining metasomal terga; however, in a few individuals the maculation on T 2 is constricted medially and, in a few, completely interrupted. All the examined males have a thin, lateral border of yellow on the otherwise black mesoscutum ( Fig. 8View FIGURES 7, 8), although in a few specimens the yellow border does not extend to the anterior margin. The amount of yellow on the posterior surface of the propodeum varies from none to the diagnostic pattern mentioned in the Diagnosis section. Females did not demonstrate any significant variation in structure or color. We examined one male specimen from Talbot County, Maryland that appeared to be a specimen of N. fragariae  except that the scutum was largely red and the yellow maculations were much greater in extent than in other known specimens of N. fragariae  .

Distribution. Nomada fragariae  is known from eastern seaboard states, from Georgia north to the coastal plain of Maryland.

Comments. This is the first description of the female of this species for which we are aware. Nomada fragariae  is truly an uncommon species; given its unique morphology, surely the female would have been noticed by past taxonomists had they had specimens before them. Hosts have not been mentioned in the past and we have not gathered direct evidence either; however, most of the specimens from Calvert Co., Maryland, came from a month-long project run by taxonomists studying parasitic Hymenoptera  at the U. S. Department of Agriculture who were investigating color preferences in bowl traps for various wasp groups. One of us (SD) looked at the approximately 8600 bee specimens collected in Calvert Co., and the only Andrena  species whose phenology came close to matching that of N. fragariae  were A. confederata Viereck  and A. violae Robertson.  Andrena confederata  was the only common large species of Andrena  present on the site (with 18 specimens recorded in total). Andrena violae  is of moderate size and very common in Mid-Atlantic lawns and fields where violets are present. It would appear unlikely that A. violae  was the host, as presumably many more specimens of N. fragariae  would have been captured throughout its range if this were the case. Andrena confederata  is uncommon throughout its range and has a largely southern distribution, which fairly well matches the distribution of the known specimens of N. fragariae  . Andrena confederata  is also known from the Midwest but it appears to be even less common there, and we are not aware of any N. fragariae  specimens captured from that region. 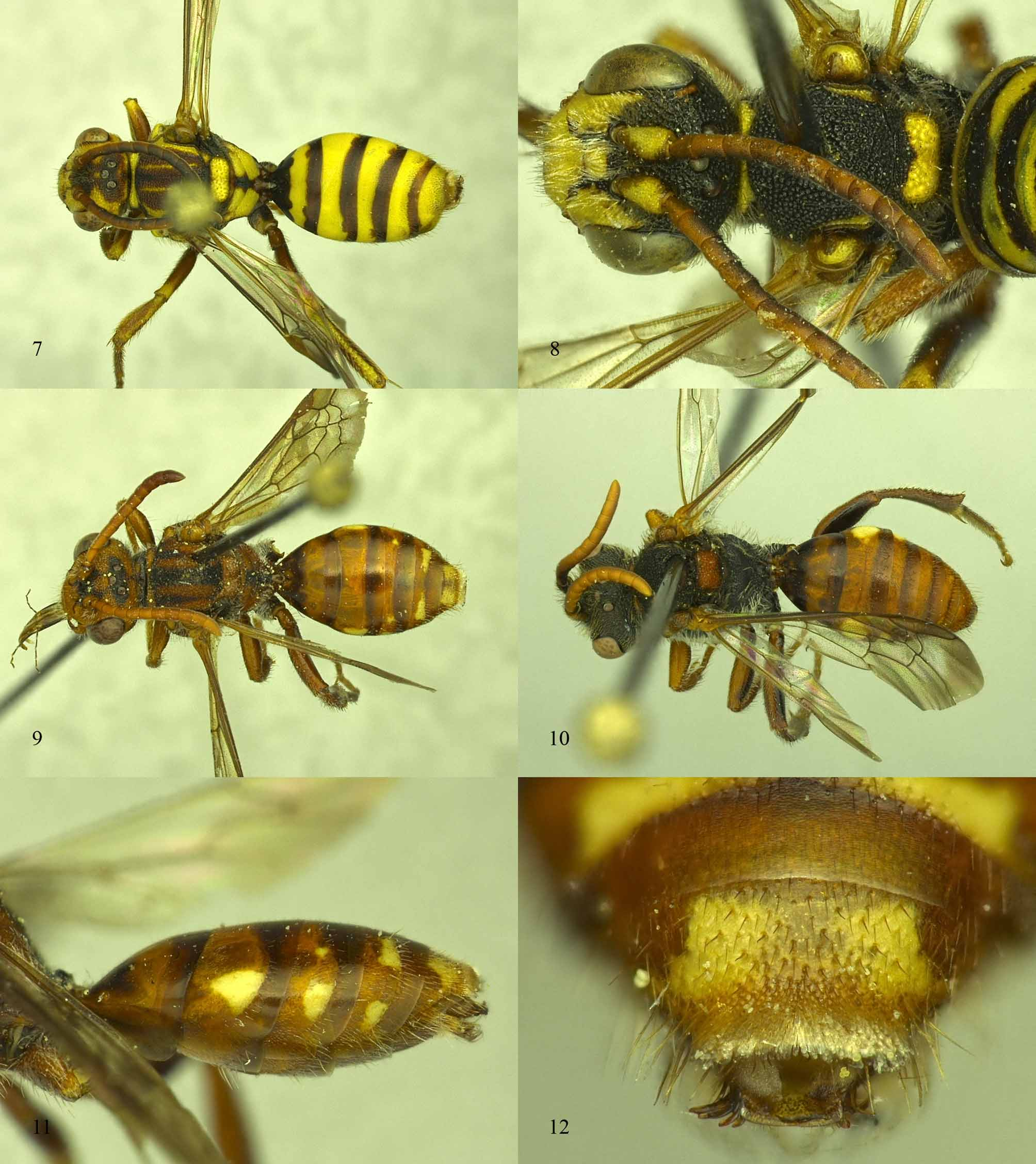 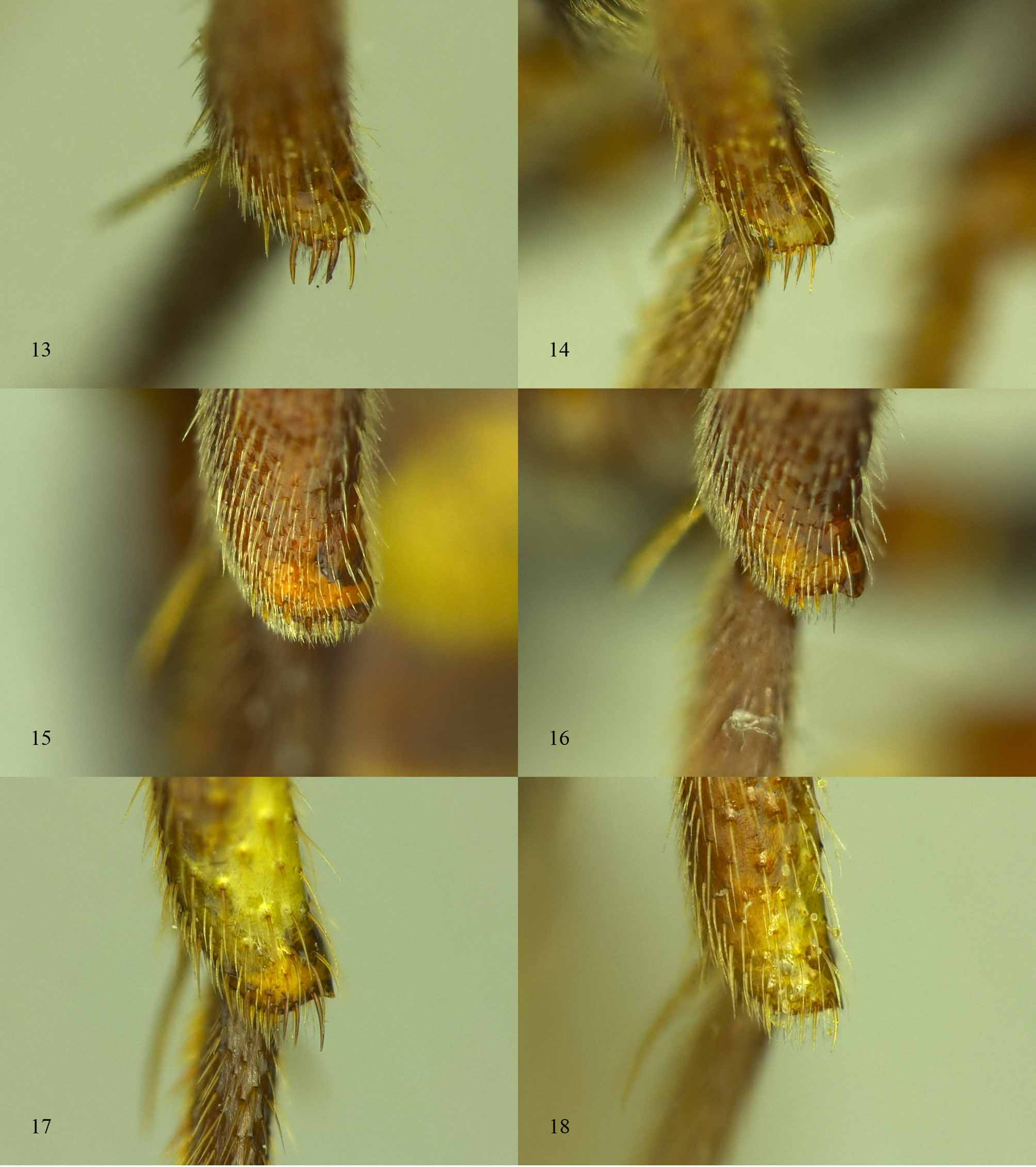