Morphological remarks. Rhiginia cruciata   has a much smaller body size (10–13 mm) than most other species in the cruciata   -group, and it is reliably recognized by its distinctive color pattern ( Figs. 34–39 View FIGURES 34–39 ), including the large black spot on the disc of the sanguineous pronotum. Variation in color patterns has been observed, but this is largely restricted to the abdominal sternites, which can be entirely sanguineous (except for sternite II [first visible sternite] and the pygophore), entirely black, or have a relatively small to moderately large black spot on the posterolateral area of sternites III–VI. In some specimens, these black spots may appear larger and form a discontinuous longitudinal band along the lateral surfaces of the abdomen, while in others the longitudinal band is continuous and wide. In few specimens, the black region of the pronotal disc may be reduced in size or even appear as two small paramedial spots. This species also has yellow to red legs with black apical markings on the femora and tibiae (the latter also has a black base). Males of R. cruciata   have small ocelli that occupy no more than half of the ocellar tubercle in lateral view and that are separated from one another by more than the diameter of an ocellus ( Figs. 34, 36–38 View FIGURES 34–39 ). The head appears ovate or globular in lateral view, the frons is convex, and the clypeus is slightly elevated and somewhat rounded at the median portion ( Figs. 36, 38 View FIGURES 34–39 ). The anterior margin of the pronotum is almost straight (slightly concaved medially), with indiscernible anterolateral pronotal protuberances ( Fig. 34 View FIGURES 34–39 ). The anterior pronotal lobe is as long as the posterior lobe ( Fig. 34 View FIGURES 34–39 ). The transverse sulcus on the pronotum lacks deep paramedial punctations. While the pronotum is often smooth, some specimens may exhibit slight rugosity within the black medial patch on the posterior pronotum. The hemelytra reach or slightly surpass the abdominal apex and have a subrectangular Cu+1A membranal cell with a proximal margin about twice that of the M+Cu membranal cell ( Fig. 34 View FIGURES 34–39 ). Abdominal sternite II has longitudinal ridges medially ( Fig. 39 View FIGURES 34–39 ).

Discussion. Petalocheirus cruciatus   was described by Say (1832) based on specimens from Indiana, Missouri, and Georgia ( USA). This small species was documented to have a body length of “half an inch,” but Say (1832) did not mention the sex of the specimens nor present a figure of the species. Thomas Say lived from 1826 to 1834 in New Harmony, where several of his papers were published as pamphlets and became extremely rare. Some of these pamphlets were reprinted and it created confusion over the dates of many species described by him ( Bousquet 1993). In one of these, entitled “Descriptions of new species of Heteropterous Hemiptera   of North America”, P. cruciatus   was described. It was reproduced by Fitch (1858) and included in the compilation of all of Say’s writings by Le Conte (1859) as a reprint of Fitch’s (1858) reproduction but with Le Conte’s own observations written between brackets. Fitch (1858) argued that although the original title page had the date 1831, only the four first pages were printed in that year, while the subsequent pages, such as the one with the description of P. cruciatus   , were printed in 1832. Therefore, the date of publication must be stated as 1832.

The specimens upon which Say described his species were deposited in his own personal collection, and much of it was assumed to have been destroyed ( Le Conte 1859; Mawdsley 1993). However, after extensive efforts to gather all the remaining scattered specimens, 770 remaining specimens of Thomas Say’s entomological collection were assembled in the Museum of Comparative Zoology (Harvard University, Cambridge, MA, USA) and recorded by Mawdsley (1993). Among the hemipterans, only three undetermined specimens of Pentatomidae   remain ( Mawdsley 1993). However, Say exchanged specimens with many European entomologists ( Mawdsley 1993), and some of his material may have survived and been deposited in European collections. While we have been unable to locate the type of R. cruciata   , we refrain from designating a neotype at this time given the previous statement.

Biology. While no other species of Rhiginia   besides R. cinctiventris   have been reported to feed on millipedes in the literature, there are crowdsourced images contributed by citizen scientists on publicly accessible websites such as BugGuide (https://bugguide.net) and iNaturalist (https://inaturalist.org) that show reliably identified R. cruciata   specimens feeding on or that are in close proximity to millipedes. In these cases, specimens appear to be feeding or climbing on the ventral surface of the millipede’s trunk, a behavioral pattern observed in other millipede assassin bugs ( Forthman & Weirauch 2012). Many of these images suggest that adults and nymphs may engage in solitary predation, but there is the possibility that adults may engage in communal predation (e.g., see https://bugguide. net/node/view/1650685/bgimage). While millipedes are difficult to identify from many of these images, one species has been identified by a millipede taxonomist (Derek Hennen): Apheloria virginiensis (Drury, 1770)   ( Polydesmida   : Xystodesmidae   ) (https://www.inaturalist.org/observations/56901159). 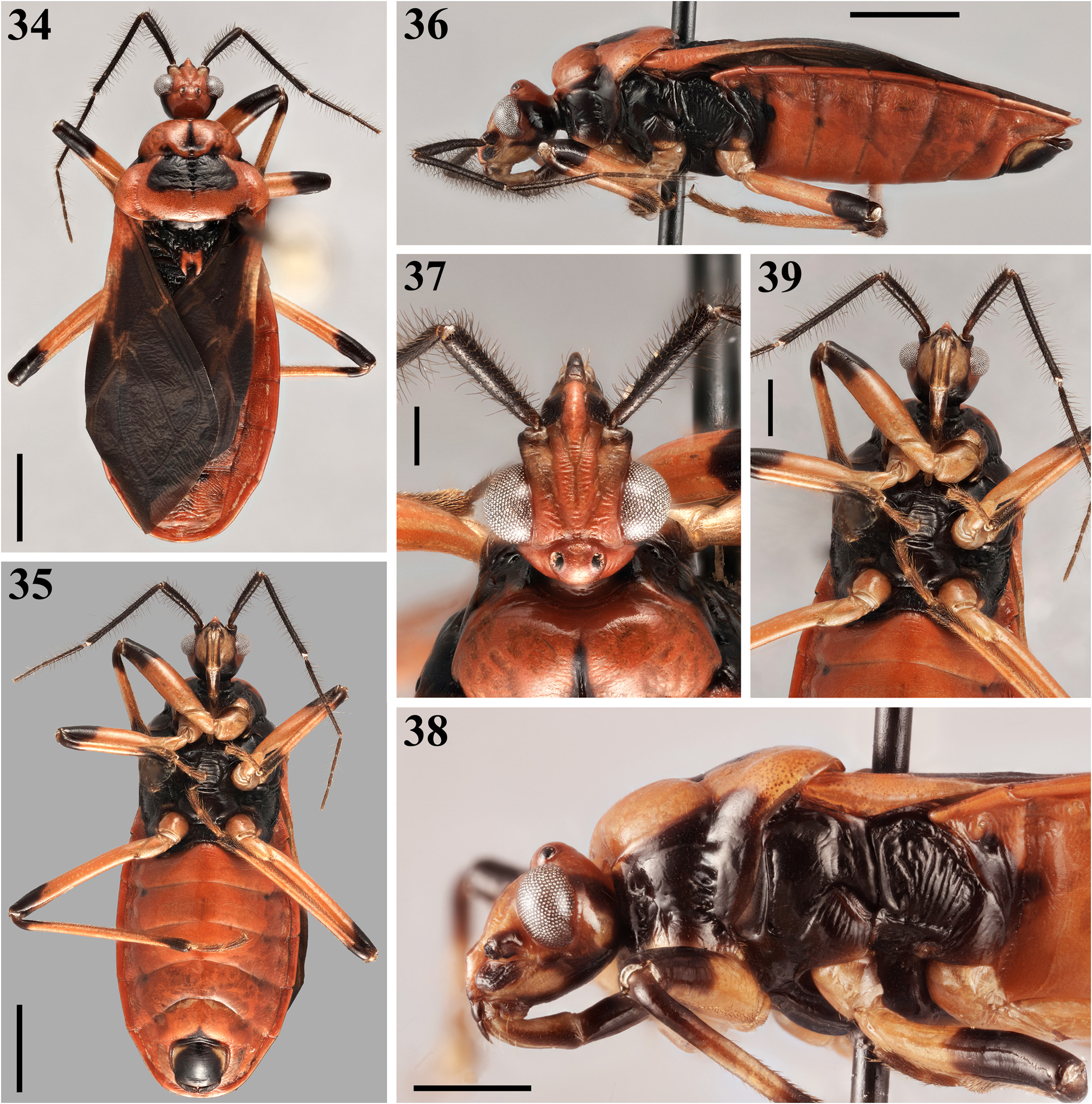