Etymology. The name is a combination of mega (Gr. large) and tibicen   (L. flute player) in reference to the large size, acoustic abilities and previous classification of the species. The genus is masculine.

Diagnostic charateristics. The characters described by Hill et al. (2015) as unique to Neotibicen   are also diagnostic for Megatibicen   n. gen. to separate the new genus from the other Cryptotympanini   : timbal covers fully rounded dorsally, extending to metathorax and tightly closing the timbal cavity; male abdominal tergites 2 and 3 much larger than tergites 4-7; bulbous male basisternum 3; aedeagal basal plat bent downward in lateral view, and aedeagus restrained by tubular encapsulation prior to the ventral surface. We can add the following to distinguish Megatibicen   n. gen. from Neotibicen   : head not as wide as lateral pronotal collar male opercula terminating at rim of tympanal cavity, male sternite VIII Ushaped or V-shaped and as wide as sternite VII in cross-section, pygofer considerably broadened towards top presenting a triangular shape or more or less parallel sided in ventral view, pygofer dorsal beak absent or poorly developed with basal portion broadly rounded or well developed, acute and spine-like, pygofer distal shoulder straight, turned inwards or turned outwards, pygofer basal lobes very long and apically pointed or of moderate length and apically rounded, uncus short, very broad at base tapering evenly to rounded apex or tapering to an expanded apex with large, rounded, downward turned lateral lobes, theca apex parallel sided or almost parallel sided, sclerotized, with apical serrations on rim, distal half of theca straight or weakly curved upwards with apical portion slightly turned downwards or curved downwards in an arc but kinked near base of curve, ovipositor longer than dorsal beak.

Diagnosis. Within the Cryptotympanini   , Megatibicen   n. gen. can be distinguished from the Neartic genera ( Hadoa Moulds, 2015   , Cacama Distant, 1904   , Cornuplura Davis, 1944   , Diceroprocta Stål, 1870   and Neotibicen Hill & Moulds, 2015   ) of the tribe with a few characters. Species of Hadoa   can be distinguished by the head being about as wide as or narrower than the mesonotum and the flat basisternum 3. The head is narrower than the mesonotum and flattened anteriorly, the mesonotum overlaps the metanotum and the five apical cells in the hind wing are unique to species of Cacama   . Species of Cornuplura   can be distinguished by spines extending from the ventral margin of the pygofer and the hooks on sternite VIII combined with the black basal cell of the fore wing. The radial crossvein in the fore wing is approximately in the middle of apical cell 2, the bifurcated, wishbone-shaped uncus and the acute lateral lobes of the pygofer of males and the sinuate posterior margin to sternite VII of the females can distinguish species of Diceroprocta   .

Neotibicen   is most similar to the new genus as it is the source of the species for the new genus. Neotibicen   can be distinguished from Megatibicen   n. gen. by the following characters: head as wide or wider than lateral pronotal collar, male opercula protruding past the rim of tympanal cavity, male sternite VIII U-shaped (V-shaped in davisi   and similaris   but less than width of sternite VII), pygofer more or less parallel sided in ventral view, pygofer dorsal beak well developed, acute and spine-like, pygofer distal shoulder straight or turned inwards not turned outwards, pygofer basal lobes moderately developed, exposed in lateral view, of moderate length and apically rounded, pointed or bilobed, uncus long and broad with parallel sides throughout its length, arched in cross-section, apex straight in dorsal view or short, wide at base and tapering to a distal finger-like extension subapically with a pair of large ventral spikes, theca apex flared and not sclerotized, distal half of theca evenly curved downwards in an arc possibly kinked near base of curve, ovipositor not as long as dorsal beak (except in N. lyricen Degeer, 1773   ).

Distribution. Species of the genus Megatibicen   n. gen. expand across the U.S. east of the Rocky Mountains and Canada. They show the greatest diversity in the central plains with M. figuratus   n. comb. and M. resonans   n. comb. restricted to the southern and southeastern U.S., and M. auletes   n. comb. having the most expansive distribution being found in 31 U.S. states ( Sanborn and Phillips 2013). Megatibicen cultriformis   n. comb. has the westernmost distribution being found in AZ, NM and Mexico ( Sanborn and Phillips 2013). 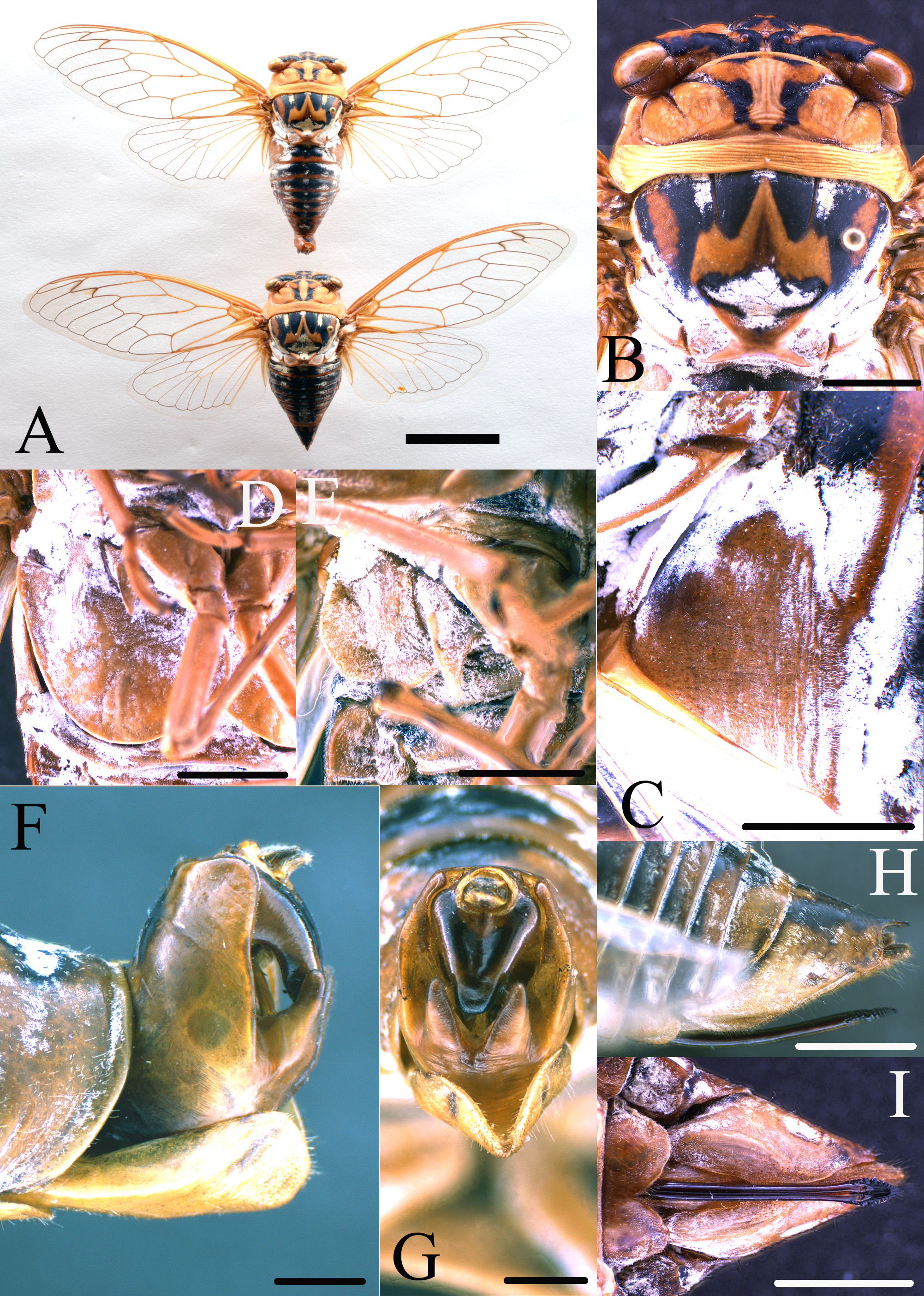