Diagnosis. The only species on Lanai with elytral stria 2 nearly as deep and broad apically as the sutural stria. The pronotum has broadly reflexed lateral margins that are distinctly sinuate before the nearly right hind angles, and the base is relatively narrow, with the ratio of maximum pronotal width to basal pronotal width 1.59 ( Fig. 2B View Fig ). Mecyclothorax mundanus   appears most similar to M. joni Liebherr   of Molokai— M. mundanus   specimens will key to M. joni   in Liebherr (2006 b) —sharing the pronotal proportions, setation, and body size, however specimens of M. mundanus   have: 1) less developed eyes (ocular ratio 1.51 versus 1.57–1.58); 2) broader pronotal lateral margins; 3) more transverse microsculpture without any tendency to form an isodiametric mesh; and 4) less developed elytral striation, with only stria 1–5 impressed, versus 1–6 plus a shallowly traceable stria 7 present in M. joni   . Standardized body length 4.0– 4.5 mm.

Female reproductive tract. I did not dissect the lone female paratype that I was able to study intensively.

Distribution. Known only from the summit of Lanaihale, which sits at 1,030 m above sea level ( Fig. 5B View Fig ).

Habitat. At the time Perkins collected this species, Lanaihale summit would have been largely populated by native trees such as ohia ( Metrosideros polymorpha   Gaudichaux-Beaupre´); any reforestation efforts with non-native species still being in the future. The forest he visited was disturbed by foraging pigs: ‘‘On July 5th I moved camp to Halepaakai [Haalelepaakai immediately SE of Lanaihale], it had taken up for me on a mule by Macfarlane, as far as the animal could go, about 6 or 8 gallons of water, there being no standing water on the top except in some pig wallows’’ (Perkins in Evenhuis 2007: 236). These feral pigs would have been from the first introduction of European hogs to the island in the late 1880’s, before their descendants were killed off by a ‘‘virulent hog cholera epidemic’’ ( Hobdy 1993: 206). During this July stay on the summit, Perkins collected M. mundanus   , M. filipes   , B. depressa   , and B. filipes (Liebherr 2000)   .

Diagnosis. Species of this group have the inner 1–3 to 1–5 striae evident on the elytral disc, but with striae more reduced both laterally and apically. The sutural stria is deep and smooth on the elytral apex, but the second stria is much shallower, though it may be traceable to the apex. Additionally this group is diagnosed by: 1) pronotum basally sinuate with beaded to broader and upturned lateral margins, and distinct hind angles; 2) pronotum setose with either lateral seta present, or both lateral and basal setae present; 3) eyes moderately convex to well developed, but not hemispherical and highly convex; 4) elytra with distinct, well-developed isodiametric or transverse microsculpture; and 5) body size moderate, standardized body length 4.0–6.0 mm. In addition to the single Lanai species, the group includes a single species from Oahu (Liebherr 2009), three species from Molokai ( Liebherr 2006 b), one described species from Maui ( Britton 1948), and four species from Hawaii Island ( Liebherr 2008 b). 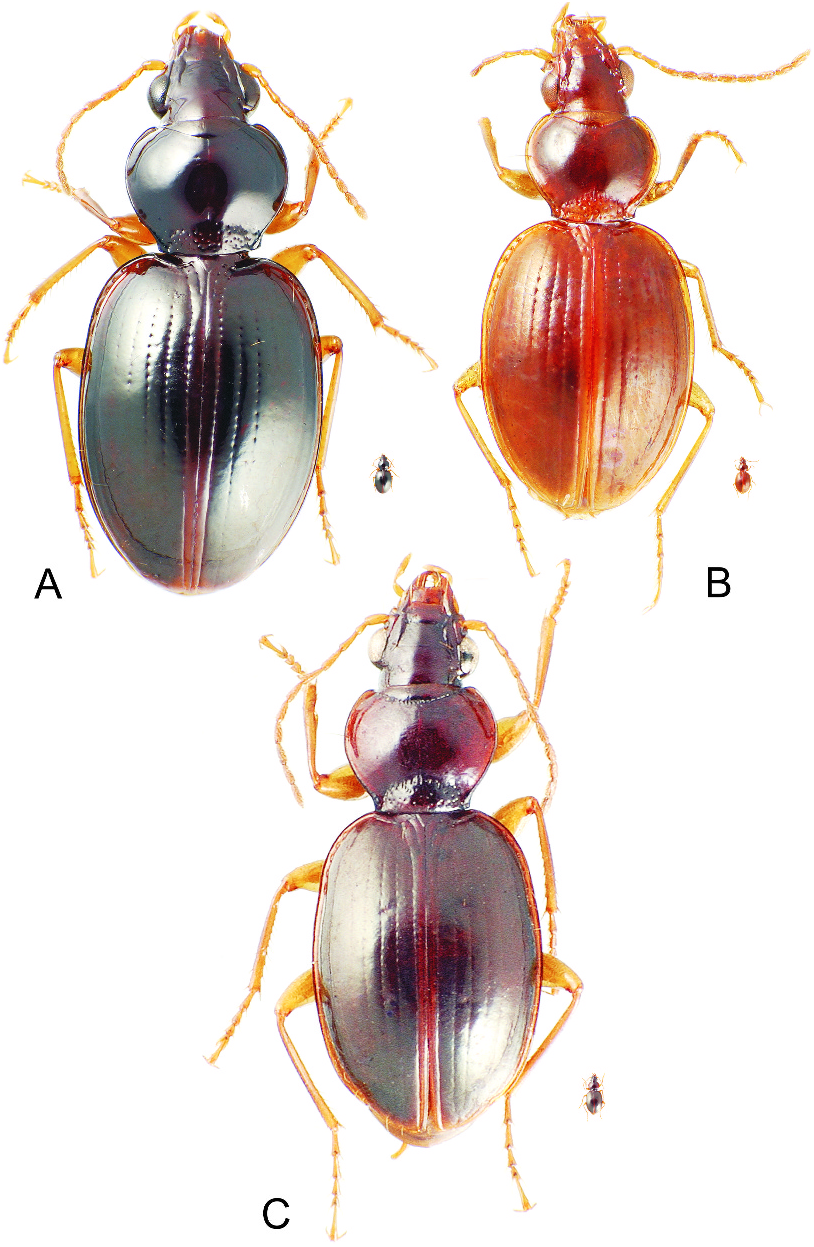