The distribution of this species is restricted to Central Africa from Cameroons (type locality) to western Kenya ( Holland 1896, Evans 1937). It can be found occasionally in Kakamega Forest, and perhaps other western forests of Kenya.

Adults rest on vegetation, usually with their wings closed, but sometimes sunbathing with the hind wings three quarters open, and the fore wings only slightly open (Figure 12.1). They come readily to flowers such as Justicia flava  (Figure 12.2).

In Kakamega Forest, western Kenya, MJWC has found caterpillars or pupae on Setaria megaphylla  several times, and once on S. sulcata  (= poiretiana  ). Plants of S. megaphylla  which were used were growing beside a narrow track and at the edge of a small clearing in fairly open forest near the Forest Rest House. The caterpillar on S. sulcata  was found in a more open position beside a road, but this may not be the norm since MJWC only found a caterpillar in this situation once.

The shelters are made by rolling an individual leaf downwards from the edges to make a tube. Two types have been observed. In one, the distal part of the leaf is missing and the penultimate instar caterpillar (91 / 66) rests in the upward directed basal part of the leaf (Figure 13.1) In the other, cuts from each margin to the midrib allow the distal part of the leaf to droop containing the final instar caterpillar (91 / 45 A, Figure 13.2). In both cases, feeding is distal to the shelter. Insufficient material has been examined to be confident, but we suggest that the first represents the normal leaf shelter, whereas the second represents the preparation of a pupal shelter.

The final instar ( Figure 15View FIGURE 15) is similar to the penultimate instar, but the posterior margin of the head may be darker, and the body is whitish subdorsally; wax glands develop ventrally on A 1 –A 8, continuous except on legs, but present laterally to legs; head 2.5 x 3.0mm wide x high (n=2, 4). Figure 15.3 – 4 shows a final instar caterpillar when ready to pupate; the edge of the wax glands is visible along the body. The light brown head distinguishes this species from P. tibullus  which follows, in which the head is darker. The final instar takes 15–19 days.

Pupation takes place in a shelter made by rolling a whole leaf or part of a leaf downwards. The pupa is protected by a wall of loose wax-covered flocculence surrounding it, although no wax is formed directly on the pupa. Pupation seems to be a tricky task for this species as several reared caterpillars got the caterpillar head capsule stuck on the pupa, leading to death. The pupa is noticeably weakly chitinized; the proboscis extending to the cremaster; cylindrical, rounded; whitish, turning light brown; T 1 spiracles light brown; front of head, anterior and posterior parts of eyes, and all the dorsal regions with long, light brown, erect setae; cremaster long and pointed. The pupal period lasted 27–29 days under Nairobi conditions. 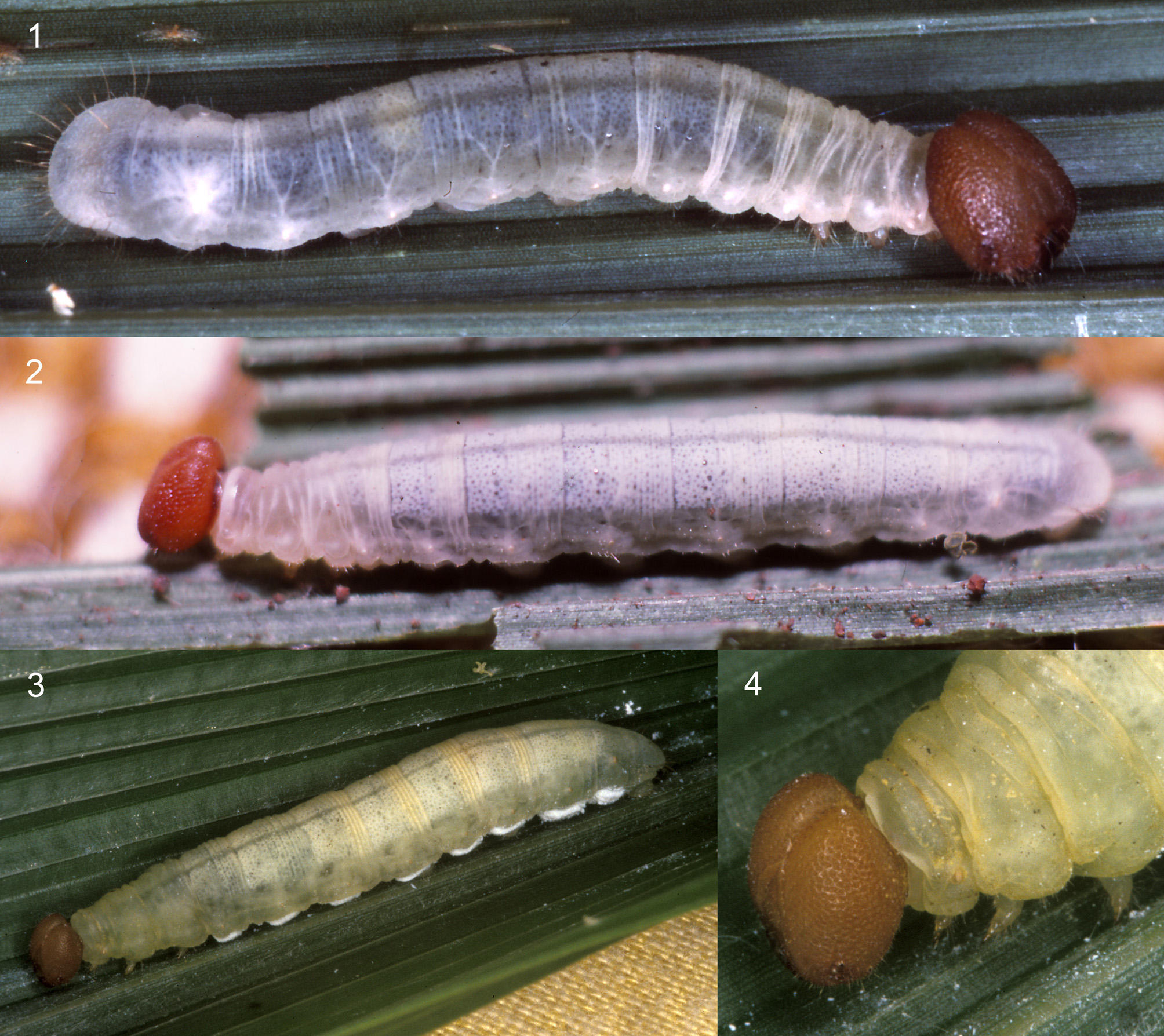