This species is widespread through the tropical rain forest belt from Sierra Leone to western Kenya ( Evans 1937, Ackery et al. 1995) and north-western Tanzania ( Congdon & Collins 1998). Holland (1896) gives the type localities as valley of the Ogové [ Gabon], Cameroon, and Sierra Leone. Evans (1937) notes some variation in spotting and size of adults and illustrates five pairs of different male claspers. Lindsey & Miller (1965) examined a range of material from West Africa and found that the slightly asymmetrical claspers of male genitalia fall into ‘a number of patterns’ (they illustrate five), apparently uncorrelated with differences in adult appearance or geographic distribution. Larsen (2005) acknowledges this variation, ‘just possibly encompassing several closely related species, but it will be a daunting proposition to prove this either way, demanding long series of sympatric material from several different localities and probably study of the early stages’ and molecular methods.

We note that the genitalia form most commonly found in western Kenya is closest to the fifth of Evans’ (1937) forms, with two large pointed projections on each valve, or variations on this. MJWC examined 17 specimens from Kakamega Forest (seven reared); the right valve and uncus is more or less constant, but the left valve is variable. Nine had two large pointed projections; one was similar, but the distal projection was blunt; two had the distal projection partially bifurcate; three had the distal projection more or less completely bifurcate; and two showed 3–4 more or less developed pointed projections. None of these forms are included amongst the forms that Lindsey & Miller (1965) illustrate from West Africa. We hypothesise that there will be found to be at least two species within M. alberti  , one from West Africa and one from East Africa. Should this prove to be the case, then M. alberti  is unlikely to be the species found in Kenya, rather M. entebbea Swinhoe  , described from Entebbe, Uganda.

In Kenya, MJWC has found this species in Kakamega Forest only, although there is a specimen from Nandi Hills in the NHM. Although it is considered rare in Kenya ( Larsen 1991, based on museum collections), MJWC would consider it one of the regular species in Kakamega Forest, encountered on most visits (not just on one occasion as indicated in Larsen (1991 )). Caterpillars are also quite common and easy to locate.

This species flies in sun and overcast conditions through the day, settling on vegetation and coming to flowers (Figure 40.1), both in forest clearings and along the edge of tracks and roads. It is not a very strong flier, unlike M. punctata  .

The food plants which MJWC has located are large grasses: Cenchrus trachyphyllum  (= Pennisetum trachyphyllum  ), at least two Setaria  sp., Setaria sulcata  (= S. poiretiana  ) and S. megaphylla  (= S. plicatilis  ). One parasitized third instar caterpillar, provisionally identified as M. alberti  was found on Panicum trichocladum  (95 / 114), but this food plant needs confirmation. The first of these food plants is the basis of Larsen’s (1991, 2005) records from Pennisetum  .

The normal shelter is made from the apical portion of a leaf, by rolling the edges downwards and joining them with silk to form a conical shelter. Feeding is from the leaf margins basal to this shelter, and as the mid-rib is bared, the shelter becomes increasingly pendant, as the caterpillar grows.

The head of the fourth instar measures 1.9 x 2.1mm (n= 8) wide x high. It is dark with a variable white band down the face. In the commonest form (5 out of 8 caterpillars examined), the pale markings were reduced to a line each side of the epicranial suture and the frons, apart from the outer angle at the base (e.g. 90 / 36 B, Figure 41.3). Another caterpillar (Figure 41.2; 88 / 17 A 3) was similar but the colour was browner, and the lateral part of the head was a little paler. Two caterpillars had more strongly developed pale markings. The pale band was relatively well developed in caterpillar 90 / 72 D, running from the vertex to the base of the frons, and about the width of the base of the frons; the base of the epicranial suture, the adfrontal and frontal sutures, the ventral end of the adfrontals and the outer angle of the base of the frons were dark; in addition, laterally, from apex to posterior to stemmata a brown band; clypeus dark brown. Caterpillar 90 / 67 was intermediate.

In the fifth instar, the body is dull whitish green with a broad white longitudinal band each side of the dorsal line, and the body creased and yellowish on the posterior margin of each segment (Figures 42.1, 42.4); pronotum posterior third black; anal plate rounded, quadrate with a strong border of long erect pale setae.. The head capsule measures 2.4 x 2.8mm (n= 22) wide x high; in the area ventral to the stemmata on the head, there are scattered, long erect setae, pale basally and distally, dark in between. The colour pattern of the head is variable, and three main forms are recognised, although all are variable, and probably represent a continuum.

In the commonest form (17 of 22 examined), the head is marked in light brown, dark (blackish brown) and white: posterior margin broadly dark; anterior to this light brown, although the colour of the lateral area may be brown or green-brown; a broad dark band from below vertex to the area between the adfrontals and stemmata; ventral to stemmata dark; a white band each side of epicranial suture; adfrontals white, dark at the base; frons white, outer lower angles dark. Figure 42.3 – 4 is intermediate between this and the next form: the posterior margin is not as dark, and the dark band on the epicranium is less developed and is excavate above the stemmata.

Paler individuals were also found (Figure 42.1 – 2, two examples) with the posterior margin only narrowly dark, the lateral area light brown, and the dorsal part of the dark band down each side of the face much reduced and more diffuse. The third form (three examples) is much darker (Figure 42.5): the head is mostly black; there may be a faint diffuse, pale area laterally; a white band from vertex to base of frons, the sutures in this area variably darker.

The fifth instar caterpillar takes about 19 days until it forms the pupal chamber; because the pupal chamber was so tightly sealed it was not normally opened until after the pupa had formed.

The pupa is formed in a rolled grass leaf, tightly sealed at each end, similarly to those of Chondrolepis  spp. Each end of the shelter is further blocked with a dense mass of tangled silk. The inside of the pupal chamber is lightly covered with white waxy powder, but the pupa itself is relatively free of it. There is no girdle to hold the pupa in place, perhaps because it is already firmly held in place in the tight shelter. The pupa ( Figure 43View FIGURE 43) is similar to those of the other members of the genus, with a protuberant head and the posterior end truncate; the proboscis sheath extends 6mm beyond the wing cases; there are variable darker markings on the head; scattered erect brown setae on the head and anterior and posterior margins of the thorax; groups of short spines on the sides and ventrum of the abdomen. The T 1 spiracles appear ridged longitudinally so that there are five ridges; the same is found in M. cretacea (Snellen)  , and probably in M. punctata  . The pupa lasts 14 days (range 14–15, n= 4) days, or 22 days (range 20–25, n= 3) from formation of the pupal chamber.

Fourth and fifth instar caterpillars were collected and reared several times, but no parasitoids were reared.

Caterpillars of this species are easy to find and rear in Kakamega Forest, western Kenya, so it is possible to attempt to interpret the variable male genitalia in light of the variable caterpillars. The range of variation on the male left claspers of reared specimens was almost as great as that found in the larger sample of field-collected males, i.e. almost the full range of variation was reared. Although the head markings of caterpillars are variable, there was no correlation with the form of the male clasper. On balance the evidence seems to point to a single species in Kakamega Forest, variable in male genitalia and caterpillar head markings, rather than segregated populations of actual or incipient species. Nevertheless the lack of overlap with the genitalia of West African M. alberti  , still indicates the possibility of separate species or subspecies in East and West Africa. 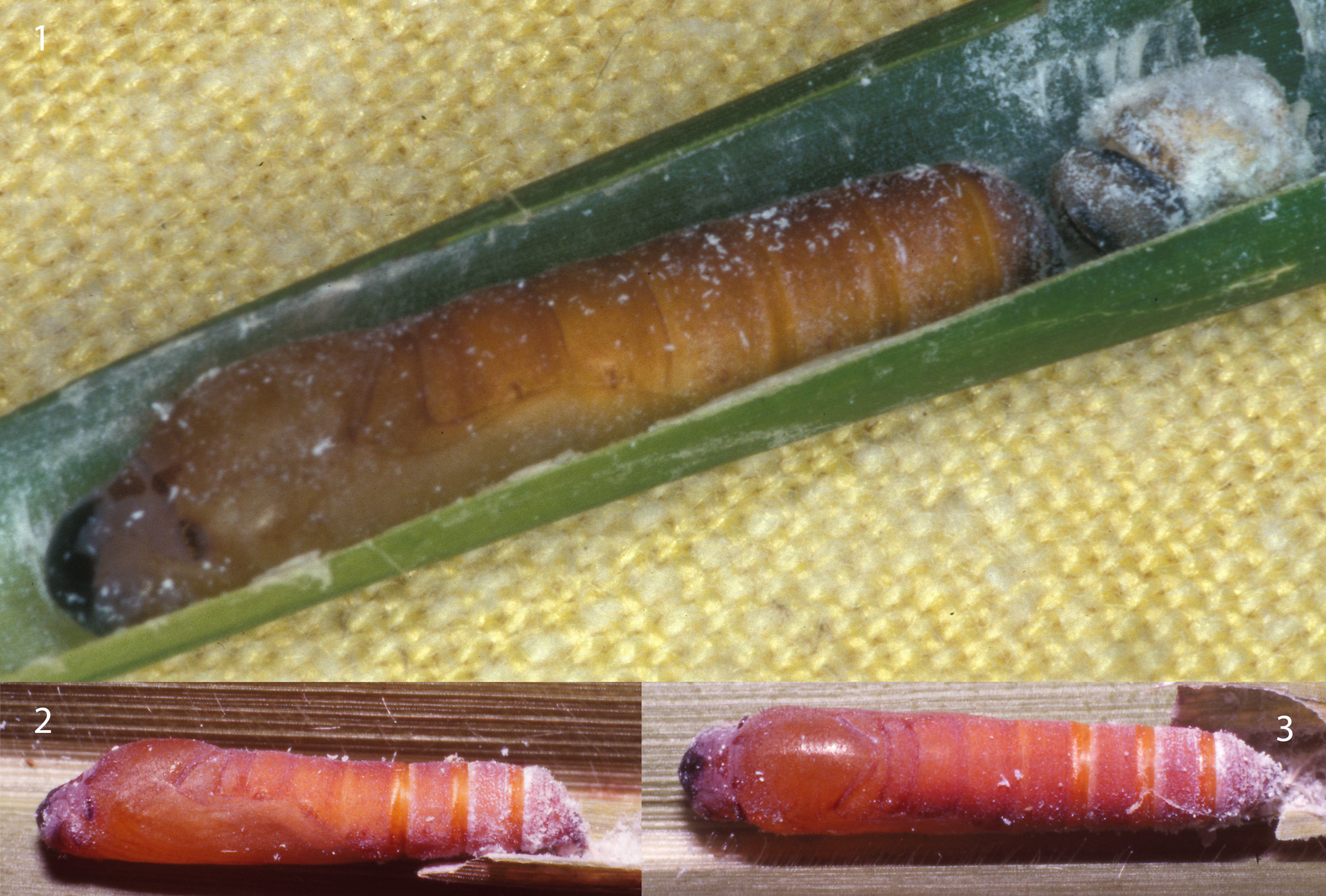