Generic diagnosis: As for species (below)

Cranial (*indicates autapomorphy – see also discussion in Phylogenetic Relationships section): Deep buccal emargination is formed by a strongly dorsoventrally compressed and transversely expanded maxillary ridge, which forms the ventral margin of the external antorbital fenestra and is thickened along its lateral margin*; antorbital fossa extends posteriorly to form a channel on the external surface of the jugal*; quadratojugal forms a thin wing that overlaps the entire external surface of the quadrate (contacting the squamosal dorsally and terminating ventrally just above the articular condyle) and contacts the jugal via a narrow bridge of bone*; quadratojugal has a constricted scarf suture with the jugal*; narrow and obliquely orientated ventral jugal projection closely aligned against the lateral surface of the lower jaw*; prominent laterally expanded ‘boss’ on the jugal*; sharply defined curved ridge on the external surface of the postorbital that is continuous with a similar ledge on the dorsolateral margin of the squamosal*; remnants of intracranial pneumatism preserved as pits on the paroccipital process and quadrate, and as sinuses on the jugal boss and anteromedial process of the maxilla*; narrow and deep pterygoid flanges lie close to the medial surface of the lower jaw (forming a slot-like guide with the ventral process of the jugal)*; paroccipital wings perforated by a discrete vascular/neural canal*; basisphenoid flanges are large, oblique and extend medial to the pterygoids and enclose narrow fossae on either side of the ventral midline of the braincase; surangular develops two finger-like rami that form much of the dorsal margin of the coronoid eminence anterior to the jaw joint*; elongate, slot-shaped surangular foramen*; broad depression on the lateral surface of the angular*.

Dentition (*indicates autapomorphy): Premaxillary and dentary caniniforms have fine, blunt, serrations (six per mm) running down their posterior margins; premaxillary caniniform lacks serrations along its anterior edge; dentary caniniform has widely spaced, rounded denticulations running down the upper portion of its anterior edge*; columnar maxillary and dentary teeth have crowns that are only slightly expanded either anteroposteriorly or transversely above the root (the ‘cingulum’ and ‘neck’ at the crownroot junction are completely absent)*; labial surface of maxillary crowns possess three prominent ridges that separate equal-sized, clearly defined excavated regions*; lingual surface of dentary crowns display a mesially offset principal ridge and crown margins that create subequal adjacent crown areas*; extensive wear facets on the upper and lower dentitions display a warp because successive teeth are worn at differing angles*.

SAM-PK-K337 – Iziko South African Museum, Cape Town ( Figs 1–3 View Figure 1 View Figure 2 View Figure 3 , 7 View Figure 7 , 20–22 View Figure 20 View Figure 21 View Figure 22 and Appendix 3); see also Crompton & Charig, 1962: fig. 1; Charig & Crompton, 1974: figs 10, 11; Galton, 1986: fig. 16.6r,s; Báez & Marsicano, 2001: fig. 5C). Nearly complete skull and lower jaw embedded in greyish-yellow sandstone. The surface of the skull is encrusted by an adherent, and very tough, layer of haematite that has been removed partially using a small diamond saw. Most of the preparation was carried out by Arthur E. Rixon, formerly in charge of the Palaeontological Laboratory of the British Museum (Natural History); one of the authors (A. W. C.) continued preparation as far as seemed prudent at the time. Postcranial remains were also listed by Crompton & Charig (1962: 1075) but the whereabouts of this potentially extremely important material is currently unknown.

During fossilization the specimen has been compressed laterally. The skull roof slopes steeply toward the right (at an angle of about 35° from the horizontal, the latter being taken as normal to the sagittal plane – see Fig. 7 View Figure 7 ). Structures on the right side have been displaced ventrad and a little backwards with respect to those in the mid-line. The skull is nevertheless reasonably well preserved on the right side ( Fig. 1 View Figure 1 , Appendix 3A). A short section of the dentary ramus, just behind the dentary– predentary contact, is missing. On the left side the superficial bones of the skull have largely been eroded away, revealing parts of the palate and braincase; the only trace of the left lower jaw is the anterior tip of the dentary and adjacent predentary ( Fig. 2 View Figure 2 , Appendix 3B).

The specimen was preserved in red sandstone. The skull (as with the holotype) has suffered lateral crushing and displacement; however, it is more complete and its preservation overall is better than that of the holotype. Unlike the holotype, the skull was not covered in a layer of haematite. Figure 22. Heterodontosaurus tucki Crompton & Charig, 1962. SAM-PK-K337 (holotype). Anterior maxillary teeth (M.1–M.4) of the right maxilla, as preserved. The presence of M.1 is inferred from the ghost-like impression preserved in the matrix. For full list of abbreviations see end of paper. Figure 24. Heterodontosaurus tucki Crompton & Charig, 1962. SAM-PK-K1332 (referred specimen). The upper dentition in: A, occlusal view based on original specimen as preserved; B, partial reconstruction of the lateral view of the maxillary dentition alone, with the isolated M.1 added in position; C, reconstruction of the medial view of M.1– M.3. For full list of abbreviations see end of paper. Figure 27. Heterodontosaurus tucki Crompton & Charig, 1962. SAM-PK-K1332 (referred specimen). Line drawings based on scanning electron micrograph images of right dentary teeth: De.7–De.9. A, worn surfaces of the teeth in oblique dorsolateral aspect showing the lipped lower edges of the wear facets and the minor imbrication between crowns (the overlap pattern is the reverse of that seen in the maxillary dentition – see Fig. 21B). B, close-up of De.9 to show details of the wear facet and the lower ‘lip’ at the base of the wear facet. For full list of abbreviations see end of paper. Figure 29. Heterodontosaurus tucki. SAM-PK-K10487 (referred specimen). Partial skull of a juvenile heterodontosaur as preserved in: A, oblique left lateral aspect to show details of the maxillary dentition; B, ventral view. For full list of abbreviations see end of paper. Figure 30. Heterodontosaurus tucki. SAM-PK-K1334 (referred specimen). Posterior portion of the left maxilla. Segmented image prepared from computed tomography scans of the original. A, lateral aspect. Bones displayed as grey, erupted crowns shown in yellow. B, semi-transparent image of the maxilla to show the extent and arrangement of individual teeth in the maxilla. Red areas indicate the presence of replacement crowns embedded within the body of the maxilla. For full list of abbreviations see end of paper. Figure 31. Heterodontosaurus tucki. SAM-PK-K1334 (referred specimen). Posterior portion of the left maxilla. Segmented image prepared from computed tomography scans of the original. A, medial aspect. Bones in grey, erupted crowns shown in yellow, replacement crowns shown in red. B, semi-transparent image to show the position and extent of erupted and replacement teeth within the maxilla. For full list of abbreviations see end of paper. Figure 32. Heterodontosaurus tucki. SAM-PK-K1334 (referred specimen). Medial view of the alveolar wall and adjacent bone and crowns. A, line drawing of the dentition showing the details of the groove (gr) that connects ‘special foramina’ (‘pit’) above the alveolar margin, the apical tip of replacement crown ‘M.5’ and the revealed crown of ‘M.2’; the anterior half of this area is quite badly eroded so bone surface details are unclear. B, magnified detail of the replacement crown above ‘M.2’. For full list of abbreviations see end of paper. 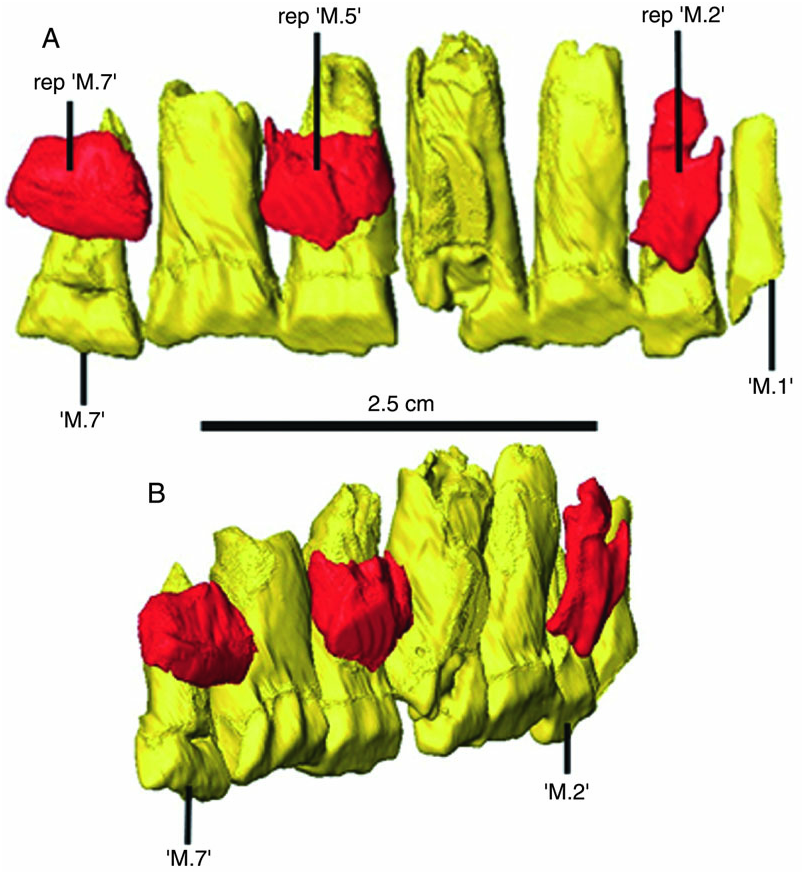 Figure 33. Heterodontosaurus tucki. SAM-PK-K1334 (referred specimen). Isolated teeth, extracted from the original computed tomography image. A, medial/lingual aspect to show the long hollow roots to the fully erupted crowns and the position of the replacement crowns on the medial side of the roots of functional teeth. B, oblique view of the same to show the curvature of the roots and crowns, the angulation of the wear facets and the relative positions of the replacement crowns. For full list of abbreviations see end of paper.